The House of the Medici: What you need to know

The dynasty that shaped Florence's history

Wherever you turn in Florence, you'll run into traces of the Medici family left over the course of six centuries. Whether you're a history buff or not, you'll end up learning something of history because in Florence you're surrounded by it, everywhere you turn. In fact, it could be said that very "air of history" is what draws the majority of its daily visitors. So who were the Medici?

Simply put, they were a family of smart, politically-savvy men (and women) who gained power and influence in a deceptively unassuming manner. Little by little, this power and influence led to them making an economic fortune with which they created a bank and made even more money. With money, came influence and power.

They used their large amounts of money to keep and expand that power and influence over the course of the centuries not just in Florence, but across Italy and Europe. It is said at one point they were the wealthiest family in Europe. They were patrons of the arts and humanities and their support in turn ensured Florence was at the center of Europe during the Renaissance, drawing many people to the city. For this reason, their influence can still be felt in the city.

While I'm not trying to offer a detailed history of the House of the Medici, I think knowing some of the basics will help anyone visiting Florence. I've planned to offer this outline of the history of the family as a first general introduction to the main members of the family and their mark on the city, hoping your visit to Florence is a bit more interesting as a result. 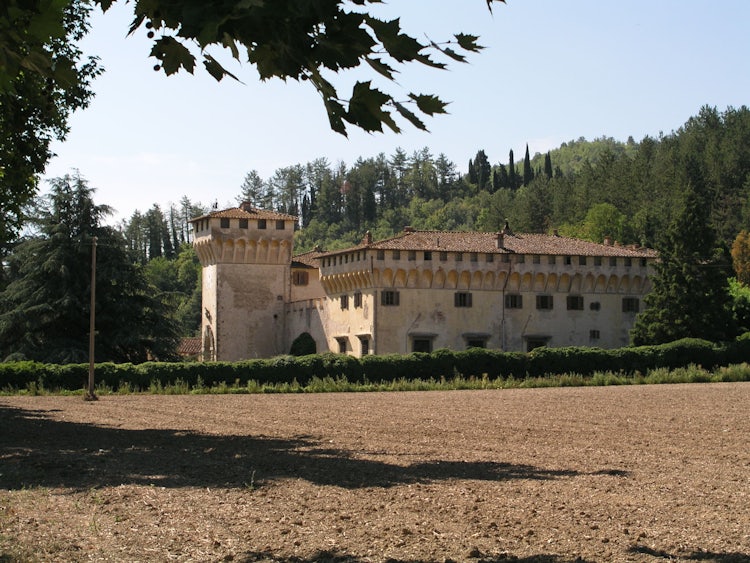 The Medici family can be traced to the Mugello valley just north of Florence where they were mentioned in a document from the year 1230. The Medici villa of Cafaggiolo was the family's Mugello home, located near present day Barberino di Mugello. So... they are not one of the original noble families from the city of Florence. This is of fundamental importance, because their rise to power and influence was a thorn in the side to other noble families in Florence who, up until then, had control over the city, its politics and economy.

In the late 14th century, Giovanni de' Medici (also called Giovanni di Bicci) started the Medici bank in Florence. It was through this influential role that he was asked to serve in Florence's governing Signoria. It is important to note that as a trade town, the guilds of commerce and trade ran Florence through this Signoria, essentially a council made up of guild members drawn randomly from a select pool of eligible members. The 9 elected officials ruled for only 2 months and lived in Palazzo Vecchio (called Palazzo della Signoria at that time) away from their families and the public to avoid being "corrupted" by outside influences.

Did you watch the TV series Medici: Masters of Florence? Dustin Hoffman plays Giovanni de' Medici in this 2016 television series. Richard Madden played his son, Cosimo. A second season is in the works!

It was through Giovanni's election to the Signoria that he started gaining supporters and thus influence. The family's prominence in Florence grew quite rapidly. He was never actually in a political position of power and his interest in politics extended only as far as it impacted the family business, which was both banking as well as the wool industry. They were still far less notable that other leading families in Florence, such as the Strozzi or the Albizzi but supporting the pope in Rome was a wise move. The Papacy made the Medici bank their official bank and this is the crucial moment that led to the increase in the family's power and wealth. 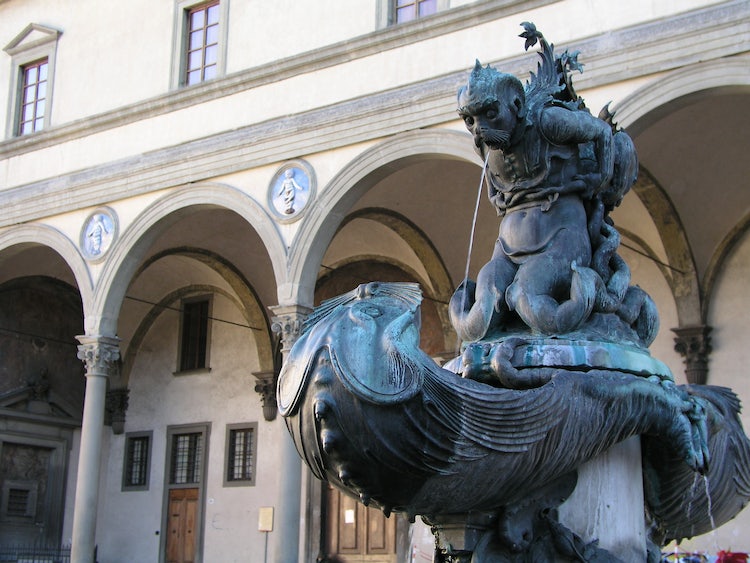 Part of Giovanni's popularity was also this: even as a wealthy property owner, in 1426 he went against his own interests and of others in his class (rich nobles) in favor of the poor when he voted to create a property tax to go into the city's coffers.

In an era when the Guilds were sponsoring works of art with conspicuous donations by private citizens to build places such as the Ospedale degli Innocenti (as the city's orphanage and sponsored by the Silk Guild) and the Doors of Paradise for the Baptistery by Ghiberti, Giovanni commissioned Brunelleschi to remodel the Church of San Lorenzo. It was to become the "family" church but he died before it was completed in 1429. The Medici Chapels behind San Lorenzo remain as the family's crypt up to this day. 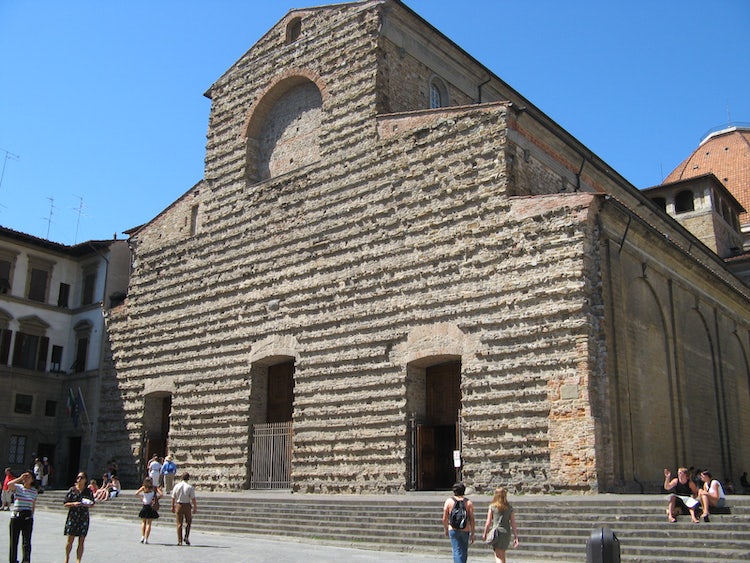 The 15th century: 3 Generations to Rule over Florence 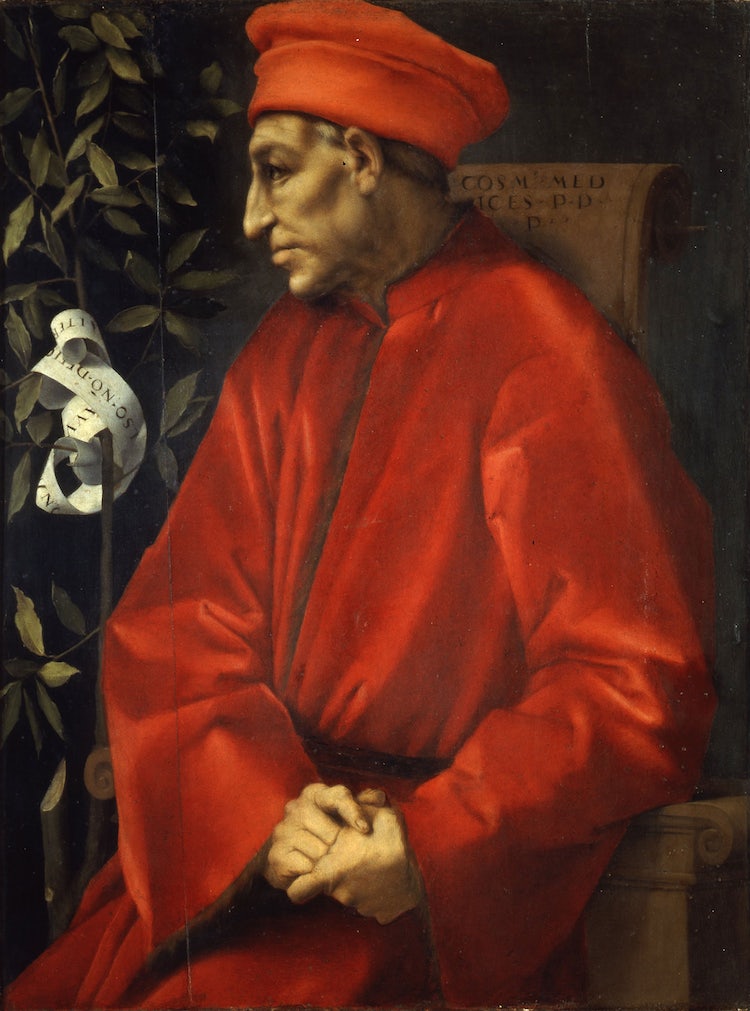 Giovanni's son, Cosimo, was carefully taught by his father to expand and maintain their influence and wealth of their bank. Cosimo's grandson, Lorenzo, not only continued the task but greatly enhanced it. Cosimo is now known as the Pater Patriae, or "father of the Country" and as "Il Vecchio" or "Cosimo the Elder" while Lorenzo is known as "the Magnificent".

Stop here and imagine this: in these 3 generations, between Cosimo and Lorenzo, the Medici went from virtual unknowns to becoming the unofficial heads of state of the Florentine city-state. I leave out mention of Piero, Cosimo's son and Lorenzo's father, because he suffered poor health and wasn't that interested in the family business or politics although he did rule over the family and city politics for 5 years before his untimely death. He is remembered as Piero il Gottoso, reference to the fact he must have suffered from gout.

Cosimo il Vecchio took over as Gran Maestro in 1434, still an unofficial position of power in Florence. The Medici were not elected, but relied on their financial power and control of the selection process for office of the now Republic to establish their dominance. It actually took the Medici until 1531 to acquire the formal title of Grand Duke of Tuscany and to abolish all vestiges of a republic of Florence. 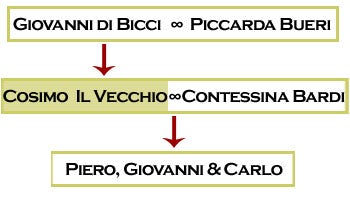 I'm getting ahead of myself since we want to focus on Cosimo for a bit: his business savvy expanded the family's fortune at the same time as he spent a good amount of it to sponsor the arts and culture! Had he not, Florence would not be what you see today. He commissioned Michelozzo Michellozi to create Palazzo Medici (now known as Medici-Riccardi), and supported Fra Angelico, Fra Filippo Lippi and Donatello. His patronage got Brunelleschi the task to complete the dome of the cathedral. He founded the first public library in Florence at San Marco, which was central to the humanist movement in Florence during the Renaissance. He gladly sponsored the effort to renew Greek and Roman civilization through literature, ensuring his grandson, Lorenzo, got a proper education in the humanities. Cosimo had an inestimable influence on the intellectual life of the Renaissance.

Now let's talk of Cosimo's grandson: Lorenzo "the Magnificent" continued in his grandfather's footsteps with sponsorship of the arts and culture. He sponsored Botticelli and Michelangelo, artists whose talents might not have been recognized had they been born elsewhere at another time. It could be said he was less talented at the family business, banking, since the bank collapsed during his tenure because of bad loans but it likely was just that he paid more attention to other aspects over banking. 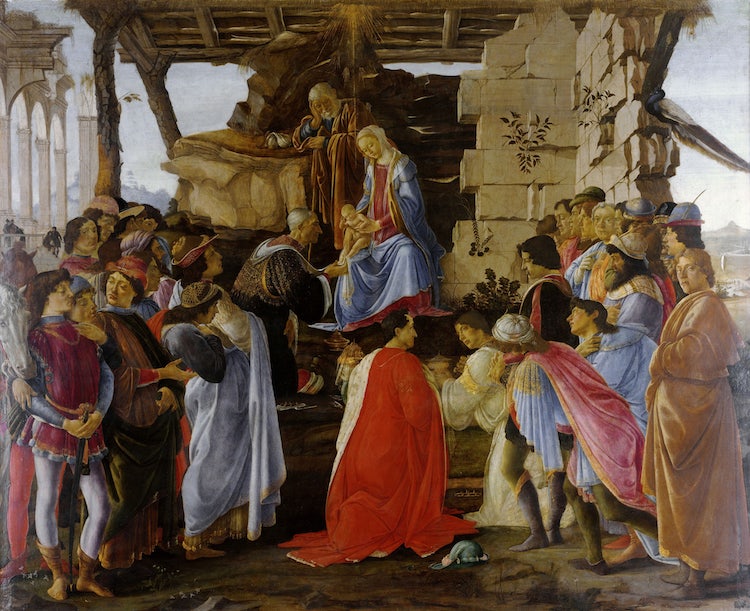 Sandro Botticelli - Adoration of the Magi - includes several generations of the family and their retainers. Sixteen-year-old Lorenzo is on the left, with his horse, prior for his departure on a diplomatic mission to Milan.

Lorenzo's heir and eldest son, Piero, called "the Unfortunate", squandered the family's remaining money and brought down the Medici dynasty in Florence in 1494. Luckily, the second son, Giovanni, had become Pope Leo X and retook Florence less than 20 years later. In 1537, when the first Duke of Florence, Alessandro de' Medici (their cousin), was assassinated, the "senior" branch of the family ended. Power was passed to the "junior" branch, to those descended from Lorenzo the Elder (Cosimo "Il Vecchio"'s brother) and thus started the reign of "Cosimo the First", known as Cosimo the Great and Grand Duke of Tuscany.

Thus, as a general start to the rise of the House of the Medici, I end this first part. I will continue with Cosimo the Great in an upcoming article!

Where to go next?

The theater piece offers a great way to...

An insider's look into what Calcio Storico...

A brief overview of Florence's history,...

Visit the Palazzo Medici Riccardi to admire the...

Itinerary of Wooden Sculpture in Florence

An itinerary to explore and discover great...