For those who really want to know the true and picturesque Florence, then a trip to the area Oltrarno is a must moving away from the classic tours and itineraries which take you to Piazza del Duomo - Piazza della Signoria - Ponte Vecchio and Piazza della Repubblica.

Looking for a Market in Piazza Santo Spirito?

On the 2nd Sunday of the month: artisan market

Every 3rd Sunday of the month: Fierucolina di Santo Spirito.

When the Florentines say ”Oltrarno” (or “Diladdarno”) they intend the whole area on the other side of the Arno River (the side opposite of the river to the Duomo). This area is also known as the historic district of Santo Spirito and San Frediano, and even today it is still inhabited by many native Florentines, even if it is often an area of choice by foreigners for its authentic atmosphere and lively quarters. You can call it a Florentine rive gauche or left bank: the Oltrarno is the meeting place of excellence for intellectuals, artists and bohémiens.

Though you will find it animated during the day with markets, passing tourists and students of all ages, Piazza Santo Spirito really comes to life starting in the evening with the ”movida”  (the nightlife), filling up with both Florentine locals and visitors, creating an interesting and lively mix, sometimes even just a bit too much. 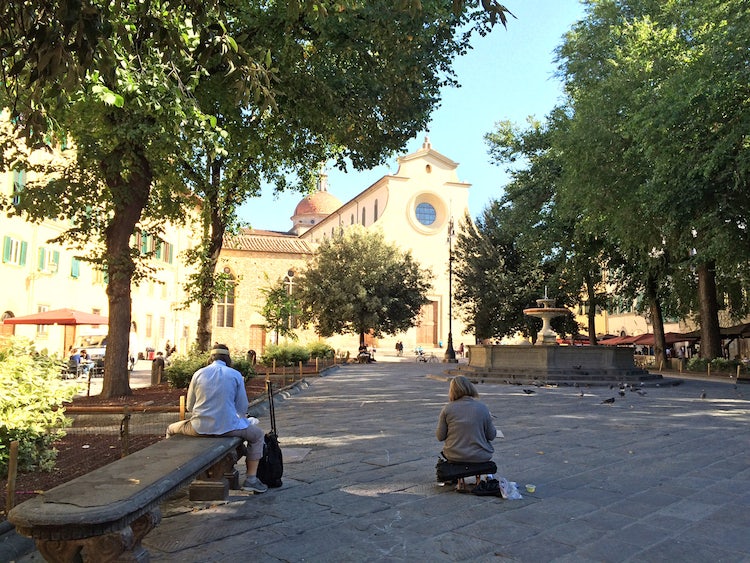 Want to join in on the fun?

The many cafés and restaurants around the square bring new meaning to "happy hour". This small group tour (up to 10 people) has you hanging out eating and drinking at a truffle bar that dates back to 1885, an Italian style tapas restaurant and one of the most trendy aperitivo places this side of the Arno.

Ready for an aperitivo?

The "action" really begins in the early evening as the local galleries, artisans and boutiques begin to close up for the night and the restaurants, ”trattorie”, cafès and nightclubs start to open. Facing onto the square itself there quite a few places with varying themes (formal, causal, rustic, elegant), many of which have terraces, patios and covered tables outside where you can sit and eat, nurse a cold beer or a glass of Chianti.

Piazza Santo Spirito was founded in the second half of the 1200’s. It was built to welcome the faithful that came to pray together with the Augustinian friars who had built a convent with a church dedicated to «Santa Maria d'Ognissanti e allo Santo Spirito» This church eventually became known simply as “Chiesa di Santo Spirito”, for which the square is named. 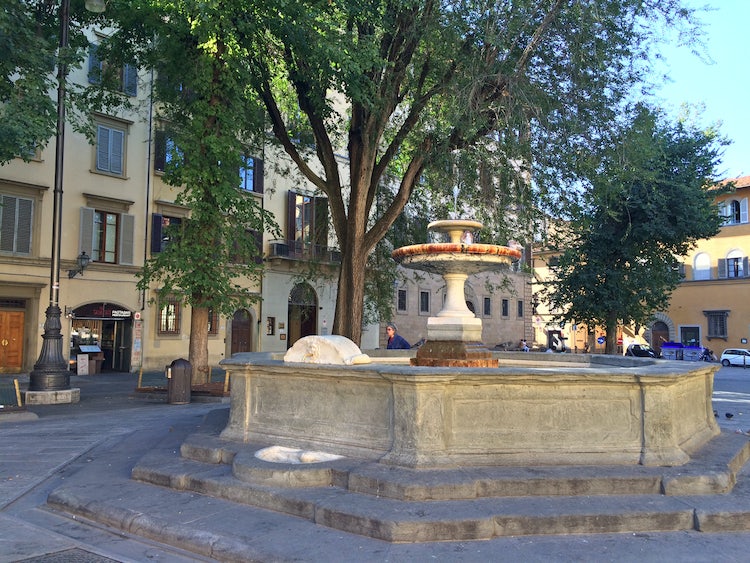 In the center of the Square is a large octagonal shaped fountain in pietra serena, (soft sandstone) which houses a marble decoration in the center. 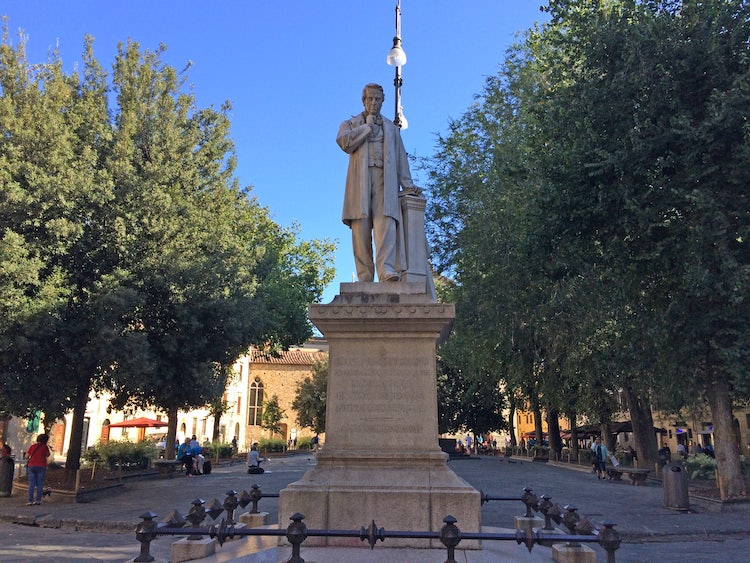 At the end of the Piazza, opposite the Basilica, you will find a monument to Cosimo Ridolfi, agronomist and founder of l’Accademia dei Georgofili.  This historic Florentine institution promotes the "art of Tuscan cultivation", in other words the study of agrarian agronomy, economy and geography in Tuscany.

Join a unique 2 hour walking tour of authentic Florence in the cool Oltrarno district to discover local artisan workshops and both the Piazza and Church of Santo Spirito, where you’ll admire one of Michelangelo's first works, a wooden crucifix.

The Basilica and "Cenacolo" or Last Supper in Santo Spirito

It is impossible to miss the splendid Basilica di Santo Spirito as you enter into the square. Built on a design by Filippo Brunelleschi in 1444, the Basilica was the last masterpiece by this celebrated architect. At the time of his death the project was passed over to Antonio Manetti, Giovanni da Gaiole and Salvi d’Andrea, who finished the church by the end of the 1400’s. 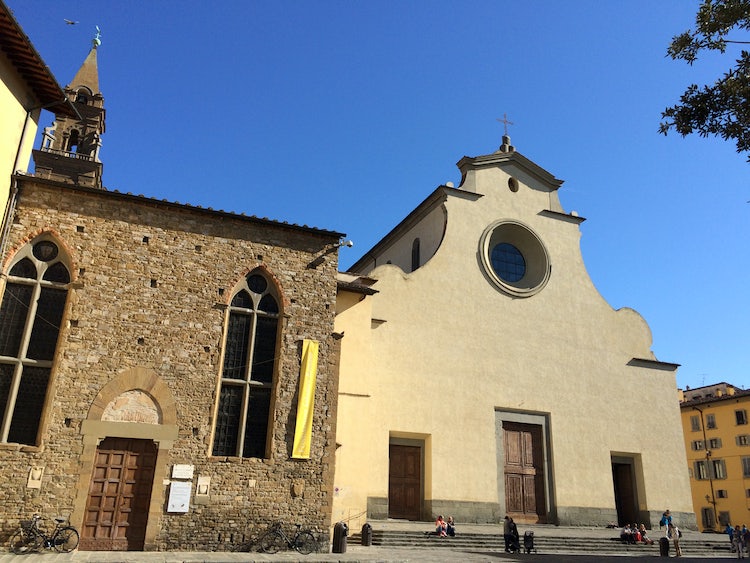 The façade of the church was never finished and  the present front face is deprived of any type of decoration. But don’t let the simplicity of the façade fool you, inside there are several noteworthy pieces of artwork from artists like that of Filippino Lippi, Bernardo Rossellino, Maso di Banco and a wooden crucifix attributed to Michelangelo Buonarroti. 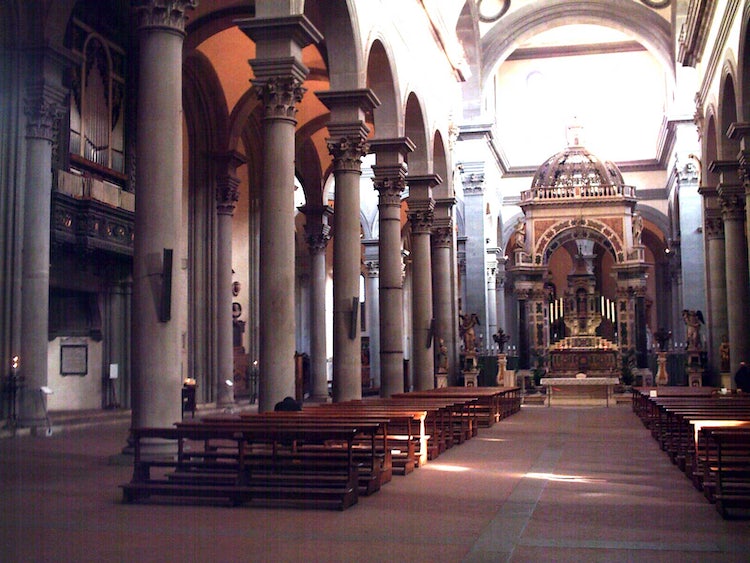 To the left of the church you can enter the ”Museo della Fondazione Romano” where you will find the beautiful Cenacolo di Santo Spirito, a true masterpiece by Andrea Orcagna.

The Cenacolo (meaning a depiction of the Last Supper) is exhibited in the refectory in the historic Augustinian convent.  This area was not originally in the project by Brunelleschi, and thus it has a different look about it: more of a late-Gothic charm. The Cenacolo was painted by Andrea Orcagna who also included Maria with a group of holy women painted over the Last Supper. Unfortunately over the centuries the affresco or fresco has been irredeemably ruined and only parts of it are visible today. Read more about the Cenacolo di Santo Spirito in this article.

It is always useful to know that in Piazza Santo Spirito, to the left of the building that houses the Cenacolo, you can find public bathrooms.

Several “palazzo” and buildings from 1400’s face onto the square, many of which were inhabited in the Renaissance by noble families and rich merchants. 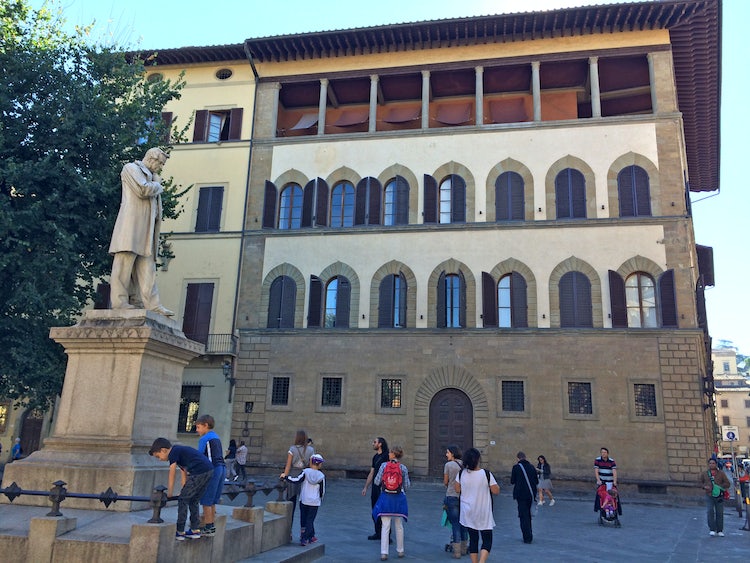 Among these buildings you will find the elegant Palazzo Guadagni, also called “Palazzo Dei”, named after the family responsible for the construction of the building in the 1500’s. The palace has a characteristic loggia on the upper level, where the Florentine aristocrats that lived in the palazzo had a chance to spend time "outdoors" without heading out.

Piazza Santo Spirito regularly hosts many markets and fairs, all of which contribute to its reputation of a lively and “happening” place.

Every weekday, you will find stands for local artisans while on weekends there are stands filled with vintage objects and food products. On the 2nd Sunday of every month, except in July and August, you will find local and ethnic handcrafts at the “Mercato Arti e Mestieri d’Oltrarno.”  The 3rd Sunday of the month is dedicated to the Fierucolina di Santo Spirito with a mix of food products, organic producers and local agricultural.

PLACES TO VISIT NEARBY

Situated inside the Church of Santa Maria del Carmine (in Piazza del Carmine).  This little chapel has a marvelous series of frescos painted by Masaccio, Filippino Lippi and Masolino da Panicale.

Constructed on a project by Brunelleschi, was the residence of the Medici Family, then of the Lorena family and finally that of the Savoia family when Florence was the capitol of Italy.  Inside you will find the Palatina Gallery, the Modern Art Gallery, the Costum Gallery, the Silver Museum and the Porcilan Museum.

The monumental park and perhaps one of the mot beautiful in the city, where you will find splendid scuptures and artwork by Buontalenti e Giambologna (to name just a few).

This building was the stage for the tormented love story between Francesco I de' Medici and Bianca Cappello, who was first his lover and later his wife. Unfortunately, the union was never truly accepted by the Medici family and both died under mysterious circumstances (a poisoning was suspected). The residence has a beautiful front facade with frescoes and is nestled among other buildings on via Maggio 26.

In the suburb of Santo Spirito in Florence you...