The Christmas season in Florence, and across Italy, starts in early December. During the first days of the month, in fact, storekeepers decorate their shop windows for the holidays and the city of Florence begins to place public decorative lights along all the city streets. 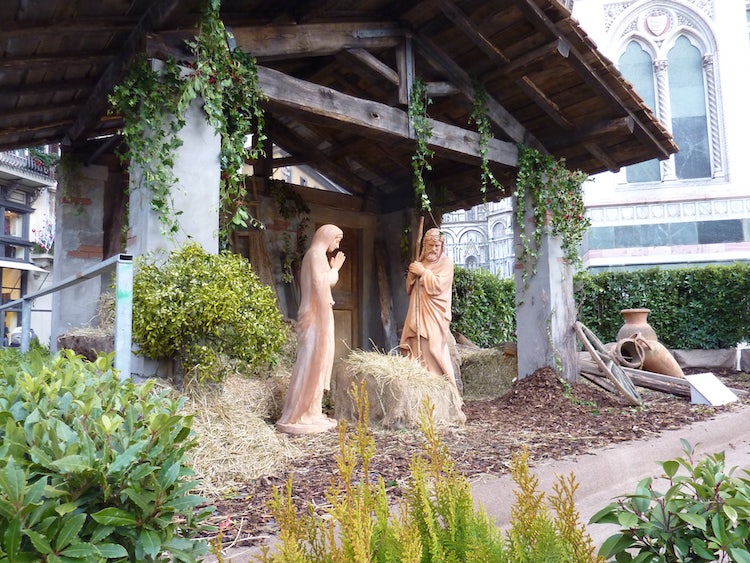 FEAST OF THE IMMACOLATA - DECEMBER 8

December 8 in Italy is a National holiday that celebrates the Immaculate Conception. This day of festivity unofficially starts the countdown to Christmas as many families traditionally use this day to set up and decorate their Christmas tree and Nativity scene in their homes, although that tradition is changing.

The last two years, the large Christmas tree set up in the magnificent setting of Piazza del Duomo is turned on on December 7th, instead of the 8th. We believe it is to draw less crowds to the piazza. The lighting up of the Christmas tree is accompanied by an official public ceremony with the participation of Florence's mayor and other events, such as concerts and entertainment.

Also in Piazza del Duomo you'll find the Nativity scene set up in front of the Cathedral of Santa Maria del Fiore. The Nativity has life-size beautiful statues made in terracotta by an artisan of Impruneta, a small town outside of Florence famous for their production of terracotta home and garden items. The baby Jesus is only placed on Christmas Day, of course.

Both the Christmas tree and the Nativity scene are up until January 6, the day of the Epiphany.

The Uffizi and Accademia Gallery are generally open on December 8.

THE FESTIVAL OF LIGHTS: Green Line 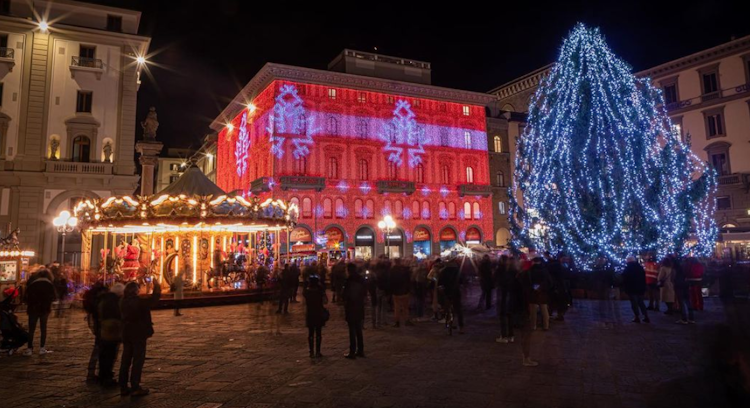 The Festival of Lights this year becomes the Green Line, dedicated to the 4 natural elements of life: air, water, earth and fire. From December 7th through January 8th, the light festival takes off with the lighting of the Christmas trees placed in front of the Duomo, inside Palazzo Vecchio, Piazzale Michelangelo, Palazzo Medici Riccardi and Piazza San Firenze. Then, for an entire month, the city's monuments and piazzas in Florence are illuminated with video-mapping, projections and other "light" games as part of a holiday event that has become quite important for its type across Europe.

Everyday from 5.30pm to midnight, the city is lit up thanks to many artistic light projects. This includes a video-mapping on Ponte Vecchio, as well as Palazzo Vecchio, the courtyard in the Palazzo Medici Riccardi and, this year, within the Sala d'Arme in Palazzo Vecchio (entrance behind the Neptune Fountain) an exhibition called "WONDERFUL!" showcasing the works of two young modern artists, Camilla Alberti and Anouk Chambaz.

There are many monuments and locations across the center of Florence that are part of the festival, from the Marino Marini Museum (also offering a temporary exhibit in the crypt area) to the Museo del Novecento, from the Chamber of Commerice to the towers and old gates of the city and to the suburbs.

There are over 200 trees covered with over 60km of LED Christmas lights across the city, from the "viali di circonvallazione" to the streets in the outer residential neighborhoods.

Many Christmas markets take place in Florence and the surroundings in the weeks before Christmas (especially during the weekends). Here you'll find gifts of various kinds, from furnishings, food, and wine. 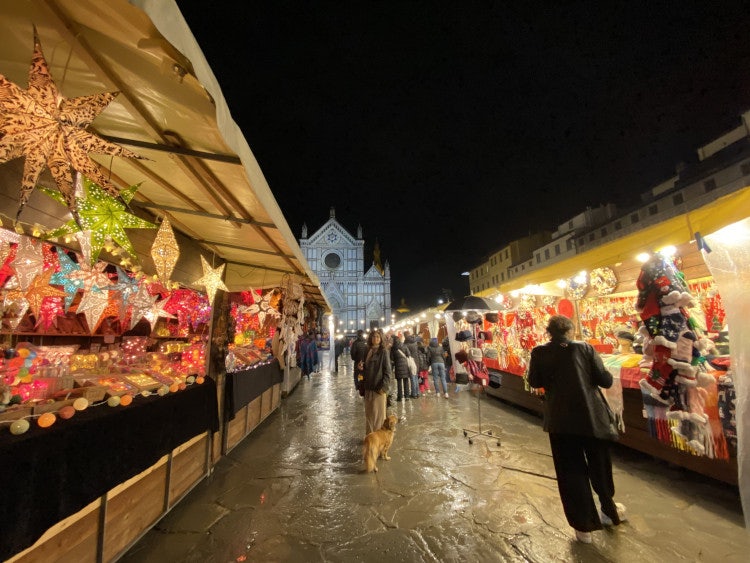 The biggest Christmas market in Florence is located in Piazza Santa Croce, and generally goes from the second part of November to a few days before Christmas. It draws on the tradition of German Christmas markets, with the traditional small wooden houses serving as stands, and offers different items from crafts to food products, small pieces of furniture and Christmas decorations. There are both foreign and Italian exhibitors.

Those that love walking the streets and shopping will find shops open every day until Christmas, both in the historical center and in the outskirts.

Among the traditional markets of the period, you can visit the Fierucola dell'Immacolata (Small Fair of the Immaculate) organized in Piazza SS Annunziata on the 8th of December.

You will also find many smaller Christmas markets in the different neighborhoods of the historical center, mainly organized on the weekends.

If you're going to visit the surroundings of Florence, you'll find many smaller Christmas markets and fairs in the Mugello area, but also in many towns across Chianti and in Fiesole. Read our article on Christmas markets in Florence and Tuscany for a more complete list. 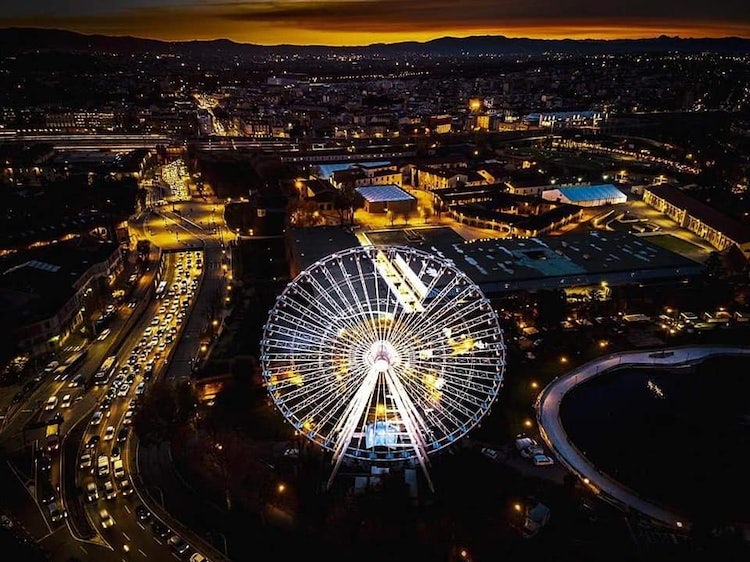 This year the heart of these activities are centerer around the Piazza da Basso where you will find the Florence Ice Village with a colorful, bright and 55 meter high Ferris wheel and the longest skating rink in Europe (300 meters). In the area all around the gardens you will find the Christmas village with food and other stands offering lots of ideas for gifts. You can find more daily information on their Facebook page.

The ice skating track is open every day from December 3rd to January 15th from 10am to midnight, while the village is open from 10am to 8pm Saturday and Sunday and 3pm to 8pm Monday to Friday. Paid entrance to the rink and Ferris wheel, skates can be rented on site.

In Piazza della Signoria and Piazza San Firenze you can enjoy Christmas music offered by the Andrea Bocelli Foundation from December 7 through January 6.

In Piazza della Repubblica, from December 10 through the 24th, you can find the "Christmas House" operated by the Meyer Children's Hospital to raise funds for charitable activities.

On Sunday, December 11 at 11am head to Piaza della Signoria to witness nine elves and Santa Claus descend from the top of Palazzo Vecchio and unroll a 12x2 meter long banner and land on the front of Palazzo Vecchio (show offered by Confcommercio and Edilizia Acrobatica).

On December 15, Mayor Nardella will preside over the traditional holiday ceremony from the city, from the Salone dei Cinquecento in Palazzo Vecchio at 6 pm, with the performance of the ReMuto rhythmic symphonic orchestra and the Corteo Storico of the Florentine Republic.

On Sunday, December 11, you can head to the Hard Rock Cafe in Florence where you can find an entertaining afternoon for the entire family! From 4-6pm. 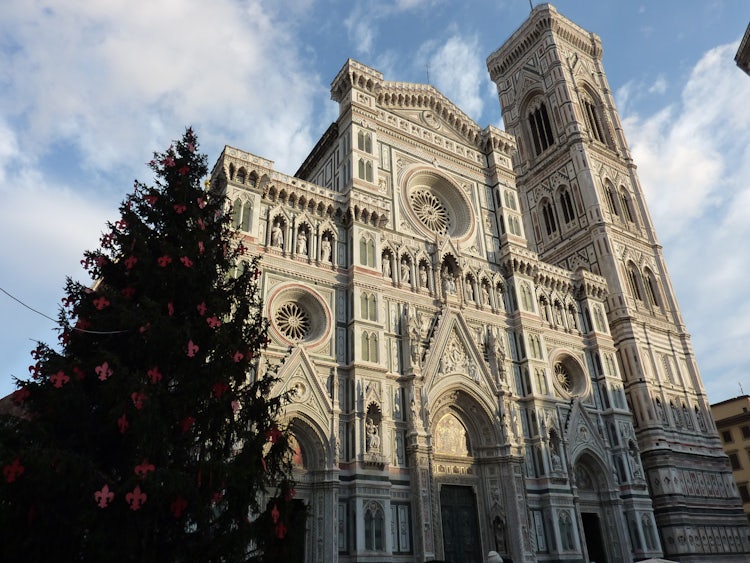 Those who wish to attend Mass on Christmas Eve and Day may find celebrations in most of the churches of Florence and beyond. 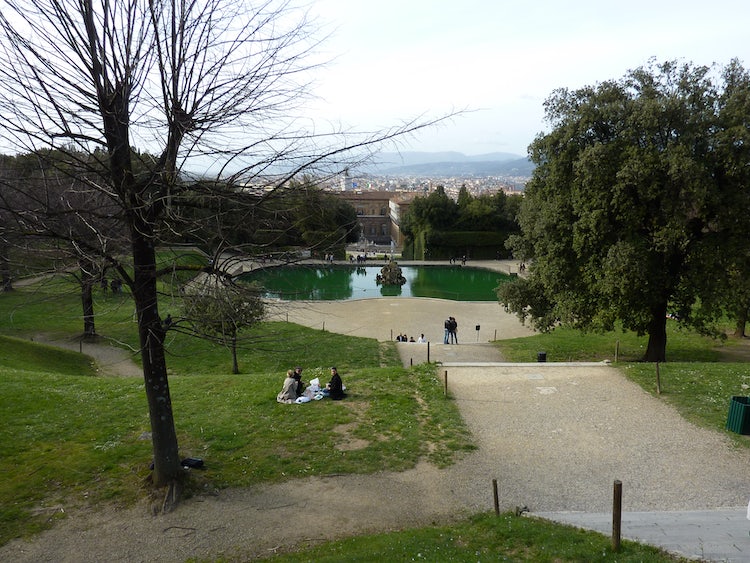 Museums in Florence are generally only closed on December 25th and January 1st, although this year a few city museums will be open on Christmas Day: Palazzo Vecchio, the basilica of Santa Maria Novella, the Museo degli Innocenti. Palazzo Strozzi with its current exhibition on Olafur Eliasson is open all day. This year, the Uffizi Gallery will open on Monday, December 26 with a special opening.

You can find additional information on the planned openings of Florence's major museums during the Christmas holidays here. 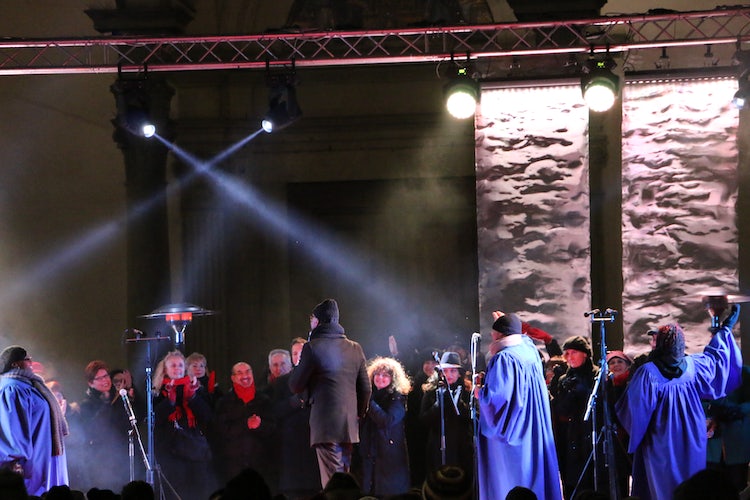 New Year's Eve in Florence is generally celebrated across several of the main squares of the city with concerts of various kinds, from classical music to Gospel and other events in other piazzas.

For this year's New Year's eve, there will be NO big concert in the city as was the case for last year but many events in across Florence to celebrate 2023.

The program is to include musical concerts, circus shows and other entertainment for the entire family, including children: the events will spread across the historical center and the suburbs. After the cancellations of the last two years, the city has announced the return this year of New Year's Eve events.

The program includes concerts in 4 piazzas in the historical center. Piazza Signoria will have acrobatic circus shows, light shows on the Palazzo Vecchio facade, projections and music starting at 9pm and running until 1am, while Piazza Santissima Annunziata will host, as is tradition, a Gospel musical concert. Starting at 9.30pm and continuing through midnight.

Piazza San Lorenzo will host the concert of classical music, from 10.15pm to 1am, with the Orchestra Toscana Classica in collaboration with the Philharmonic Orchestra of Kharkiv.

Three marching bands will enliven the evening in the Oltrarno area by moving around the streets of the Oltrarno starting at 9.30pm, with a stop in Piazza del Carmine at midnight to welcome the new year.

There are other events taking place on the 31st across the city, which include the return to the city of the Medrano Circus at the Mandela Forum: no animals, just spectacular acrobatics and dance exhibitions. On the 31st, their performances start at 9.30pm, tickets cost 30-80 euro.

Instabile, along at the eastern end of the Arno on the right bank, will offer a total party for families with kids, starting with dinner at 8.30pm accompanied with acrobatic performances to continue on with music until midnight. Dinner starts at 50 euro (less for kids) but it is also possible to just show up after dinner to enjoy the music and welcome the new year celebrating with others.

The Hard Rock Cafe also hosts a mega New Year's Eve party that starts with dinner followed with both live music concert by Suzy Q and a DJ set un until midnight. Starts at 8.30pm, you can check out the special menu, program and book online here. 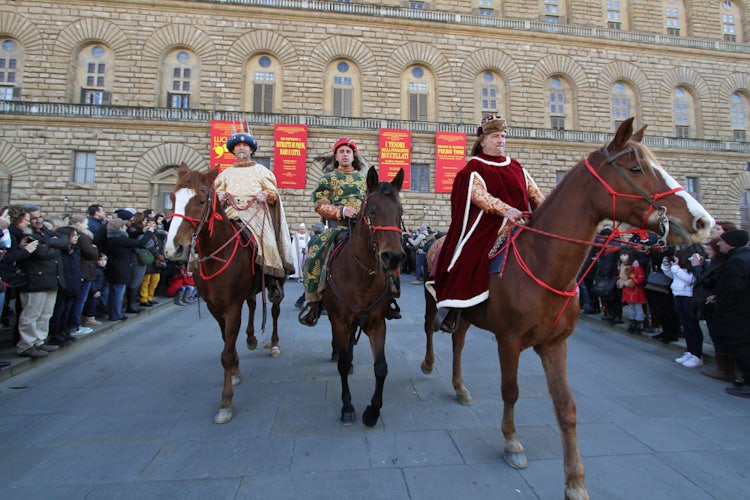 On January 6, the day of the Epiphany, the Catholic Church celebrates the arrival of the Magi to Bethlehem and the delivery of their gifts to baby Jesus. In Italy, it is a feast day and most shops are closed.

Florence celebrates the Epiphany with the "Cavalcade of the Magi", a grand parade in the historical center which evokes the journey of the Magi and the delivery of the gifts to baby Jesus, arriving to the Nativity scene set up in front of the Duomo in Piazza del Duomo. The reenactment, in magnificent costume, involves many people from all over Italy and is a traditional and special event we recommend you see if you are in town. You can find more information and beautiful photos of the event in the Cavalcade of the Magi here.

Also on the 6th at 11am, you can head to piazza della Repubblica to see the Befane descend from both the arc and the Rinascente store, a show offered by Confcommercio and Edilizia Acrobatica. If you don't know who the Befana is, head there and check it out!

If you're in Florence during the Christmas holidays, you should also visit the marvelous Chapel of the Magi frescoed by Benozzo Gozzoli inside Palazzo Medici Riccardi. It is a small, precious frescoed chapel in the palazzo which traces the journey of the Three Wise Men. It is, of course, open all year, but in this season it is a must-see considering the theme!

We make every effort to offer correct and up to date information, but please double check on the official websites we link to before finalizing your visit to ensure there haven't been any changes in the meantime!

Did you find an error? Let us know so we can correct it, thank you!