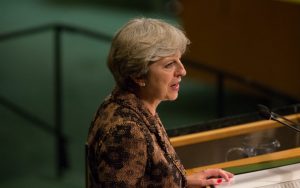 Last week, completely by surprise, the press office of Downing Street announced UK’s Prime Minister Theresa May will be in Florence on September 22 to deliver a key speech on the negotiations for Brexit. Why was Florence chosen? Officially, because Florence is the “heart of Europe” and the selection has left many scratching their heads. Why Florence instead of Rome? Why not another country such as France or Germany?

As many might know, the negotiations for Britain’s exit from the European Union are not going exactly as planned. Progress seems stalled, with many wondering whether they are stalled completely. Could the UK be rethinking its position?

Just two weeks from the annual conservative congress, the risk is growing that the Tory leader might lose its backing and have to step down. So the meeting in Florence is seen as an “opportunity” to update everyone on the status of negotiations and underline the strong desire for a special relationship with the EU even after their exit. Downing Street’s press office says a symbolic place is needed to transmit this message. We have yet to find out where the speech is taking place (not at the European Union Institute in Fiesole, for sure) nor who she is meeting with. All we know for now is that it is to be a major speech to break any impasse in the Brexit negotiations.

Florence might just be the perfect symbolic setting for such a speech. It is an inspirational setting, one that has served as a backdrop for history, politicians and writers of the past. From the ruling Medici family that ruled the city for centuries to the political writings of Dante Alighieri and Niccolò Macchiavelli to E.M. Forster’s Room with a View, the city has played host to important historical events. Under the Medici, a banking family, Florence became the “cradle of the Renaissance” as the family drew power from its money lending practices. Until a UK prince failed to pay its debt to Florence. Many expect May to outline the plan for the UK’s “divorce bill”. We have just to wait a few more hours to find out exactly what she’s willing to propose.