These are the main recurring annual events that take place in Florence every year. Try to include one of them if you're in Florence at the right time.... or plan your dates to coincide with one of them! 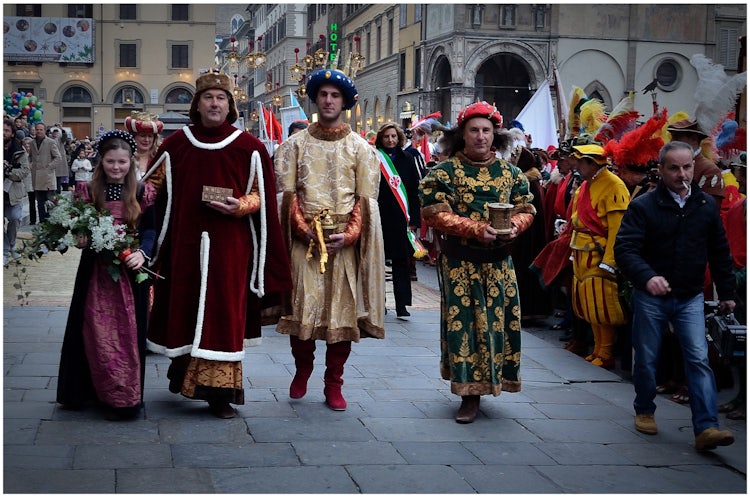 Also a legal holiday in Italy (banks, stores and offices are closed), Epiphany commemorates the arrival of the Three Kings in Bethlehem. It also marks La Befana, Italy's traditional day of gift giving. The Befana is an old, witch-like woman who, like Santa Claus, knows whether children have been good or bad. Stockings are hung out on the night of the fifth, waiting to be filled by the Befana with sweets for the good and coal for naughty kids. This is also a day when all of Italy is glued to the television for the national lottery drawing (a modest 5 million euros).

In celebration of the Epiphany, a "Cavalcade of the Three Kings" takes place in downtown Florence on the afternoon of January 6. The event is a commemoration of an ancient celebration taking place in the city as far back as 1417 of the arrival of the three kings to the manger where Jesus was born. On this special occasion, a parade in beautiful Renaissance costumes starts from Palazzo Pitti and winds its way through the city... Read all of the details in our article »

With a grand parade of small floats through the city, including an enormous puppet dragon, the Florence carnival highlights diverse world cultures.

Local tradition is represented as well with colourfully dressed characters and musicians in Renaissance costume, riders on horseback, bands and dancers. The entire program for each edition is designed by the local city council along with representatives of all foreign communities who live in Florence, with the goal of celebrating the city's ethnic diversity. Countries participating include: Brazil, Peru, Sweden, Bangladesh, Senegal, the Ivory Coast, China, Mexico, Germany, and the United States. The parade begins in Piazza Ognissanti and continues through the rest of the city, from Lungarno Vespucci and Lungarno Corsini, to via Tornabuoni, via Strozzi, Piazza della Repubblica, via Roma, Piazza Duomo, and via Calzaiuoli. It will end in Piazza della Signoria, where prizes will be awarded to the most original costumes and where the Piccolo Melograno Choir will perform.

The traditional Florentine New Year, on the feast of the Annunciation, begins in the Palazzo Vecchio with a morning parade filling the streets with elaborate medieval dress and music. The celebration continues at the Piazza SS Annunziata where Florentines and visitors alike feast upon Italian cuisine at an outdoor market (9 am - 5 pm), enjoy an evening concert (9 pm), and observe the frescoes of the Annunciation featured in the church. From 1250 to 1750 the people of Florence gathered in the SS Annunziata to welcome the arrival of spring and to officially celebrate the Annunciation, when the Angel Gabriel told Mary that she would be the mother of Christ. Located in the Santissima Annunziata (the Most Holy Annunciation) church, a medieval fresco of the Annunciation was the centerpiece of the New Year festivities. It can still be viewed on the inner wall to the left of the entrance.

Legend says the artist commissioned to paint the Annunciation fell asleep after completing all but the face of the Virgin Mary. Upon his awakening, he found a completed, beautiful blonde Madonna - angelic masters had finished the fresco for him. Florentines have communed on March 25 in the presence of this holy image for centuries, and in fact were so devoted to the Madonna that for 168 years, until 1750, they refused to accept the Gregorian calendar year that begins on January 1. This devotion remains a part of their culture, so New Year is still unofficially observed on March 25, the feast of the Annunciation, exactly nine months before Christmas and the birth of Christ.

A play of the Passion of Christ, takes place on Good Friday in Grassina, a town 15-minutes south of Florence by car or bus 31. Admissions: 15 euro (bleacher seats), 10 euro (standing). The Florence area has its own special Easter traditions, like the rest of Italy. One of these is the annual Passion Play where four hundred town residents participate in the play which faithfully recreates New Testament episodes, culminating in the Crucifixion. Many more spend time the preceding year sewing the necessary costumes, preparing the lighting, painting backdrops and taping the classical music aimed at creating the appropriate atmosphere. The Passion Play begins in two different locations: while a procession of people dressed like the Galileans and Romans of 2,000 years ago winds its way along the streets of Grassina, a succession of scenes from the life of Christ, accompanied by narration and classical music, takes place on a nearby hill. The crowd arrives there just in time to witness Christ condemned to death to become part of the drama which unfolds before the spectators. This deeply-moving ritual has been re-enacted in Grassina on and off for the past 300 years.

A major event in Florence, the Scoppio del Carro, or the "explosion of the cart", dates back almost 400 years. An elaborate wagon built in 1622 and standing two to three stories high is dragged through Florence behind a fleet of white oxen decorated in garlands to the square between the Baptistry and Cathedral. The cart, properly rigged with a suitable arsenal of fireworks, awaits a dove-shaped rocket (symbolising the Holy Spirit) from the Cathedral altar which sets off a ferocious dance of fire on impact. In old tradition, a big bang meant a good harvest. Watch our video of the Scoppio del Carro and read our article for more details! 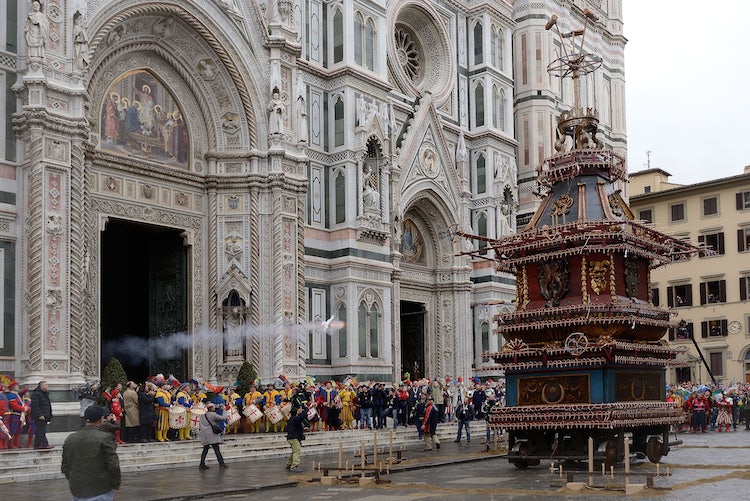 From late April through June, the Florence Maggio Musicale, May Music Festival, is a series of internationally acclaimed classical music concerts and recitals, opera and ballet in venues across the city. Tickets can be hard to come by, so check the online schedule and purchase tickets in advance.

June is Florence's golden month, with several things going on.

Fabulous fireworks on June 24 conclude Florence's celebrations to St. John the Baptist, the patron saint of the city. In the late afternoon, the historical football match - Calcio Storico - is played in Piazza Santa Croce, preceded by a parade through the historical center from piazza Santa Maria Novella to piazza Santa Croce. The Calcio Storico commemorates a similar match played by a soldier trapped in the city in 1530. This Renaissance soccer game is played by teams from four neighborhoods in Florence: Santa Croce (blue), Santo Spirito (white), Santa Maria Novella (red), and San Giovanni (green). The game is a combination of soccer, rugby, and big time wrestling, all played while wearing 16th century costumes. 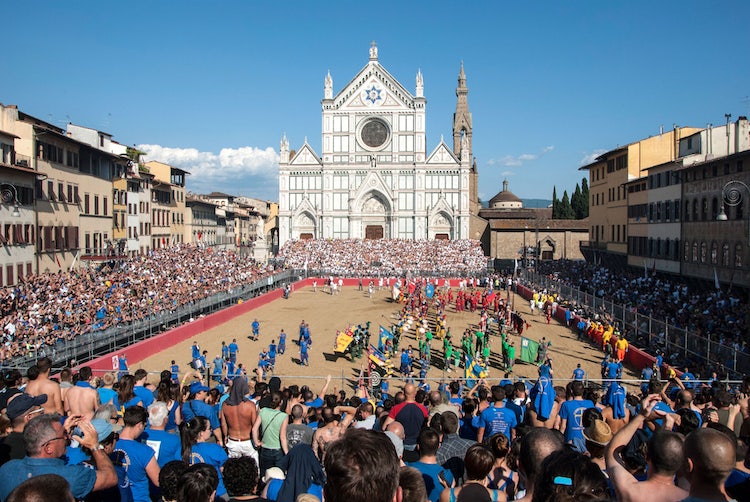 Every summer, the Florence Dance Festival takes place (from June through end of July) at the Teatro Romano in Fiesole, as part of the wider Estate Fiesolana program of music, poetry and cinema. It is really a magnificent experience to enjoy a concert in a Roman amphitheatre thinking of the thousands, if not millions, who have shared in the experience over the course of the past centuries.

For the feast day of San Lorenzo, Piazza San Lorenzo hosts an outdoor celebration with live music and free lasagna and watermelon for all visitors. The event begins around 7 p.m. (after a celebratory Mass inside the San Lorenzo at 6 p.m.) when the market stalls that line the streets of the square during the daytime are finally rolled away, making room for the festivities. The food is served at 9 p.m.

On the eve of the feast of the Nativity of the Virgin Mary, Florentines walk through the city carrying paper lanterns illuminated by candles from within. This tradition dates back to the Renaissance, when pilgrims bearing lanterns would gather in front of the Church of the Most Holy Annunciation (Santissima Annunziata), a Marian sanctuary, on that date. Many would arrive from outside of the city after sunset so needed a lantern to light the way.

Today the main events of the Rificolona, including a speech by Florence’s Cardinal, are held in Piazza Santissima Annunziata. The main procession, however, starts in Piazza Santa Croce at around 8 pm, and passes through Piazza della Signoria and Piazza del Duomo then through Via dei Servi to arrive into the Piazza S.S. Annunziata. 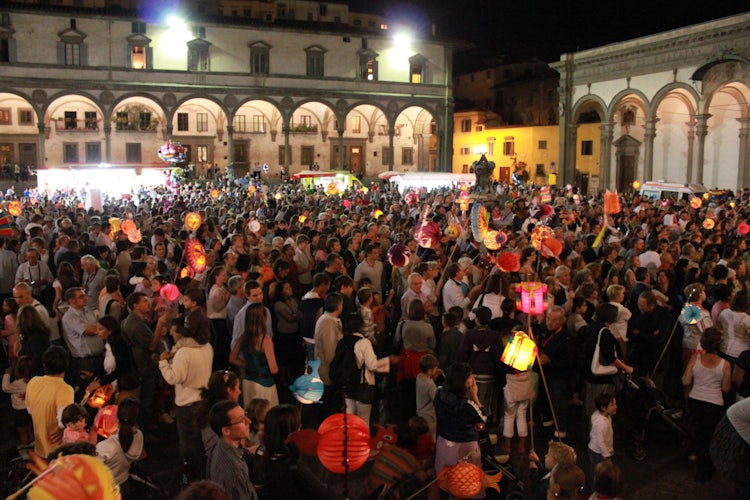 Florence's Cathedral, or Duomo, Santa Maria del Fiore (St. Mary of the Flower), is dedicated to the Virgin Mary. The cornerstone of the present Cathedral was laid on Sept. 8, 1296, the feast of the Nativity of the Virgin Mary. In her honor, the terrace around the base of the Cathedral's cupola is open to visitors who are free to walk around and get a 270° view of Florence's rooftops and surrounding hills.

Only a waist-high wall separates the viewers from the view. The pink, green and white geometrically-designed marble facade and lacy Gothic windows of the Bell Tower are just 25 ft. away. You can see the concentric circles in which the city is architecturally organized, the most ancient section, Roman and medieval, innermost. To the south is Santa Croce, the Orsanmichele, the Bargello, Badia and Palazzo Vecchio.

Beyond that, across the Arno, San Miniato, Porta San Niccolò, Forte Belvedere and the Pitti Palace come into sight. The eastern part of the terrace faces the Baptistery with its gold copies Ghiberti's "Gates of Paradise" (the original is in the Cathedral museum) and San Lorenzo. You come into direct contact with the materials the city is made from: stone, marble and terra-cotta and an unexpected glimpse of rooftop gardens, not visible from the ground. Fiesole and San Marco are visible to the northwest. The entire vision of Florence seems to be protected by hills, and crowned - right behind you - with a golden sphere topped by a golden cross, silhouetted against the clouds. 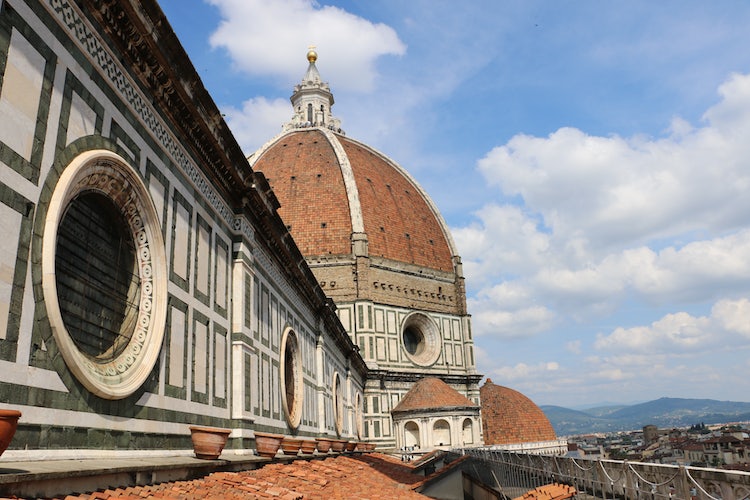 Santa Reparata was Florence's ancient cathedral built on the site where Santa Maria del Fiore is located today. Thanks to archaeological digs carried out from 1971 to 1972, experts have been able to reconstruct the original floor plan, which can be visited. Generally, celebrations include guided visits of 'Roman Florence' and conferences on Roman Florence in the first centuries of the Christian era. A historical parade honoring the Florentine Republic is followed by a ceremony in Santa Reparata's crypt in the evening.