The Calcio Storico Fiorentino in Florence

June is one of the best months to find yourself in Florence, as it can be a lot of fun to watch the semi-final games for the Calcio Storico or the final match played on June 24, on Florence's patron saint's feast day for St. John the Baptist. For those that can't see it in person, the viewing rights have been given to an international network so that the match can be viewed across the world. Details further down this page...

What is Calcio Storico?

The Calcio Storico Fiorentino is a combination of soccer, rugby and big time wrestling originated in 16th century Florence and played today in historical costume. The four teams of the historical neighborhoods of the city play against each other, first in two semi-finals and then the final match to determine the winner.

Piazza Santa Croce, located directly in front of the church Santa Croce,  has always been the home to this game, known as “giuoco del calcio fiorentino” or more simply just as Calcio (which means “kick” in Italian). The square is covered in dirt to "return" to those times when it was just a dirt square (today it is covered in stone) and recreate the setting. Of course, today bleachers are also set up so that spectators can better enjoy the game. 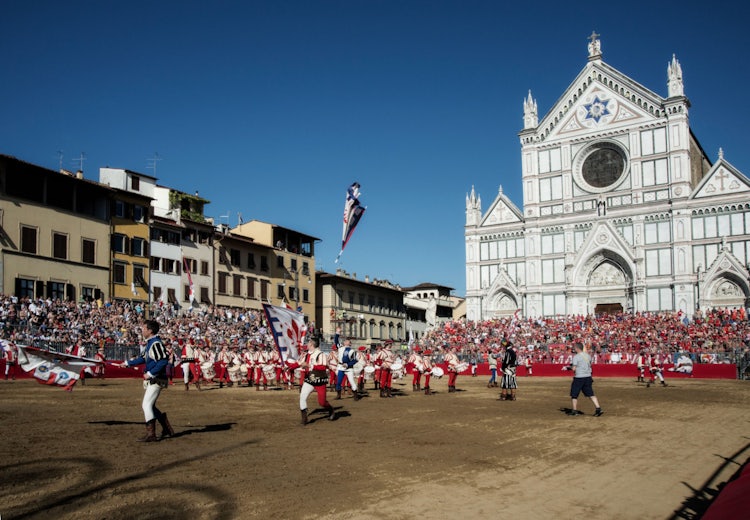 The official rules of the Calcio Storico were first published in 1580 by Giovanni de’ Bardi, a Florentine count. Invented by rich aristocreats, Calcio was originally just played by just the higher social class and took place every night between Epiphany and Lent. Just like Roman harpastum, it was played in teams of 27 and both feet and hands were used. Goals can be scored by throwing the ball over a designated spot on the perimeter of the field with another goal running the width of the short ends. There is a main referee, six linesmen and a field master. Each game is played out for 50 minutes with the winner being the team with the most points or “cacce” scored.

Want to know what the game means for a "calciante" or Calcio player? Read my interview of Fabrizio Vallero, a "calciante" for the Bianchi of Santo Spirito to find out.

The prize for the winning team? A Chianina calf!!

Who plays who for the semi-finals? The teams are decided on Easter Sunday by drawing painted balls, see photo below. 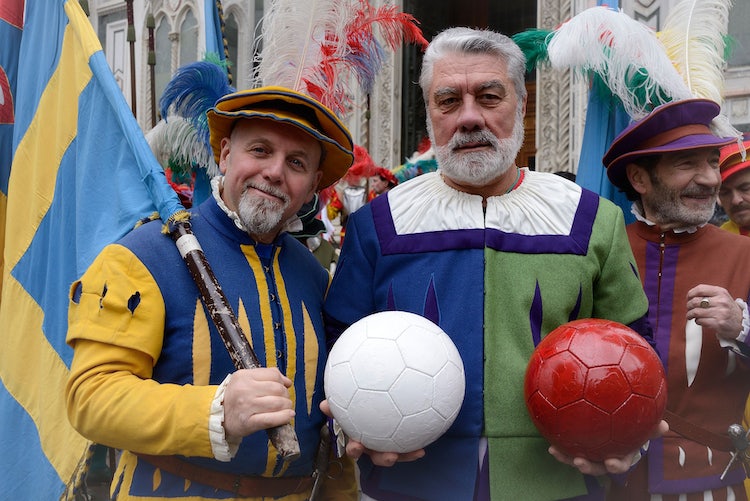 Over a weekend in early June, the two semifinals are played between the four teams. The two winners will then play against each other in the final match, which is always played on June 24th (at 5pm) in grand style on Florence’s feast day for its patron saint, St. John the Baptist. On this day, a splendid parade in historical costume starts in Piazza Santa Maria Novella and heads through the center on its way to Piazza Santa Croce. Each of the four districts is in the parade, you’ll see the players going by as they go to play the final, even those that won’t be playing the last match. The parade starts roughly around 4pm since the final should start around 5pm. Just head downtown, you’ll run into the fun!

The day ends with a spectacular fireworks show launched from Piazzale Michelangelo that can be watched along the Arno's banks. Of course, 2020 and 2021 meant no fireworks because of the pandemic but we are hopeful as the date draws near that the fireworks will be confirmed for 2022. 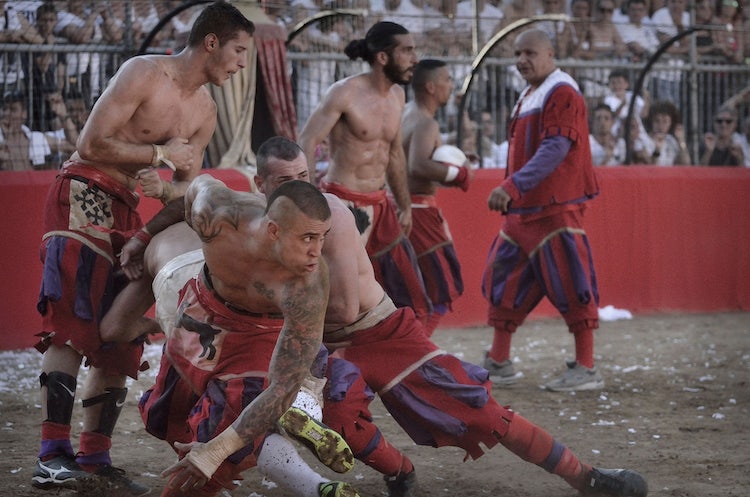 On Easter Sunday during the Scoppio del Carro event, the draw for Calcio Storico was held to decide who plays against whom on the semi-final dates. In 2022, the Calcio Storico games will once again be held with an in-person public, after a year with no tournament and another with only one game where only a select public was allowed.

The dates of the semi-final matches are to be June 10 and 11th, due to a national referendum election being held on Sunday the 12th. Local government and the association decided it was better to move the semi-final games to Friday and Saturday.

Just remember that the final is always on June 24th, between whoever wins each of the two semi-finals!

Tickets start being sold on June 6 at the headquarters of BoxOffice Toscana on via delle Vecchie Carceri, 1. These are the hours:

For the final game, tickets will be sold from June 17 at Box Office Toscana Murate headquarters office (Via delle Vecchie Carceri 1) from 2-8pm. The office will be open from 9am to hand out queue numbers. Tickets need to be paid by electronic cards (debit or credit cards, no Amex accepted). Tickets are not yet being sold on TicketOne, ONLY if they don't sell out in person. Cost of tickets is the same as above, for the semi-finals.

Watch on internet or TV

Once again this year, anyone can get a front row seat to the Calcio Storico games by watching online (pay-per-view) or on TV (locally on Toscana TV, channel 18). For global audiences, you can stream the game on DAZN from 5.30pm. Here is the link for the FINAL. While watching online or on TV isn't the same thing as being at the game in person, you can enjoy Calcio Storico Fiorentino from the comfort of your own home if you can't make it to Florence this June.