Florence is divided into 4 historical neighborhoods: Santa Croce, San Giovanni, Santa Maria Novella and Santo Spirito. Each quarter takes the name from a place of worship located within its area.

Today we’d like to present the Santa Croce area in Florence, found along the eastern end of Florence’s historical center and running along the right bank of the Tuscan river Arno. It’s a great area to explore and visit with its churches, markets, numerous restaurants, nightlife and shops.

The name of the square and the quarter comes from the main church it hosts, the Basilica of Santa Croce, well known for the numerous graves or funeral monuments of important Italian historical characters placed within: you can visit the graves or monuments of Galileo Galilei, Michelangelo Buonarroti, Macchiavelli, Rossellini, Ugo Foscolo and many more.

The Basilica of Santa Croce was designed by Arnolfo da Cambio who worked on the church between 1294-1295 for the Franciscan order. The facade presents a neo-Gothic style and was created with polychrome marble by the architect Niccolò Matas between 1853 and 1863. 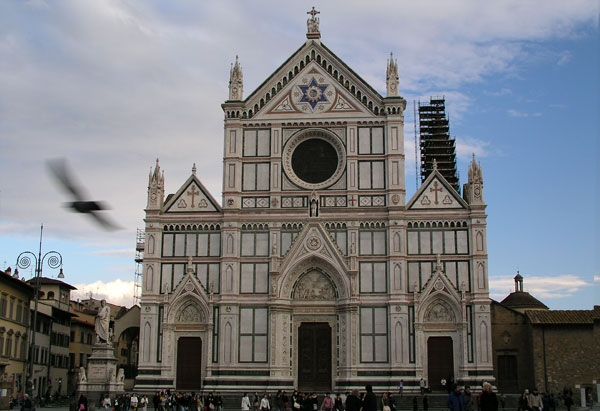 The Museum of Santa Croce

In the church and then passing into its cloister, you will find the Museum of the Opera of Santa Croce containing many splendid artworks: the Cappella dei Pazzi by Filippo Brunelleschi, the Crucifixion by Cimabue, the frescoes by Taddeo Gaddi and more.

The square on which the church overlooks is rectangular-shaped, perfect for hosting one of the most important events in Florence every year: the Calcio Storico Fiorentino. Here, the 4 neighborhoods of Florence challenge each other to win a Palio, an entire beef of Chianina (an Italian breed of cattle of central Italy from which the Bistecca alla Fiorentina has to be made of) and the honor of the win, of course!

All throughout the year, the square hosts several other fairs and festivals, from the Christmas market in December to the Chocolate fair in February.

More about the square

Looking at the church,  you will see on the left of the church the statue of one of the most important Tuscans in the world: Dante Alighieri. The statues was made by Enrico Pazzi in 1865.

All around the square’s perimeter, a series of beautiful palaces adorn the square including the Antella Palace, famous for its protruding floors and frescoed decorations. 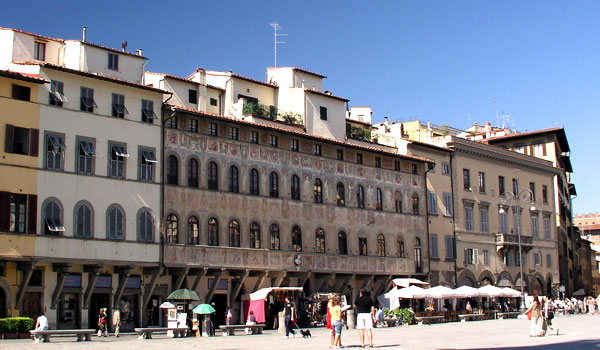 During the day, the area is full of life – there are many leather shops around the square and nearby streets, with the Sant’Ambrogio market acting as a main draw for residents and tourists alike as it offers fresh local produce, meats, cheeses and more every morning. The streets around the market offer various places to eat a quick and budget-friendly lunch, with many pizzerias and restaurants on the nearby Via de’ Macci and Borgo La Croce.

Once evening falls, the area around the Santa Croce square and most of the neighborhood come alive as the restaurants, cafes and clubs fill up with people enjoying an evening out. There are many restaurants in the area, offering both traditional Tuscan cuisine as well as more modern re visitations as well as ethnic options. At the corner of Via Verdi and Via Ghibellina you’ll find Theater Verdi which hosts a rich calendar of plays, operas, ballets and concerts from October through May. See their program online here: http://www.teatroverdionline.it/

With all this busy activity around, the Santa Croce square turns into a meeting place for many of Florence’s young and old people alike.

Santa Croce is a lovely and lively area in which to spend a vacation in Florence. All of the historical sights in Florence are within walking distance and reachable in less than 10 minutes, from the Uffizi Gallery and Ponte Vecchio, Palazzo Vecchio and the Duomo. If you are looking for an accommodation in this quarter, take a look here at the offerings within the Santa Croce district at FlorenceAccommodation.com.