Celebrate the holidays and new year at the Uffizi with a visit to a unique exhibit in the brand new temporary exhibition spaces open just this last Monday.

Have you ever considered how art has been used to celebrate power? Or as an object of conquest? From Napoleon to Hitler and right up to the mafias of today’s world, art has been an expression of the status of the conquerors that have sought to posses them, when they weren’t theirs to own. Sometimes to destroy a people, other times to celebrate it.

Sometimes artworks that were stolen or taken were respected – consider, for instance, the great modern innovation of the Louvre in Paris, a museum that today guards many such works – but often many works were just stolen and mutilated, where possession was more important than conservation.

Here is where the new exhibition, this year’s expression of the holiday “I Mai Visti” exhibition the Uffizi organizes every December, “La Tutela Tricolore: Custodians of a Cultural Identity“, comes in. 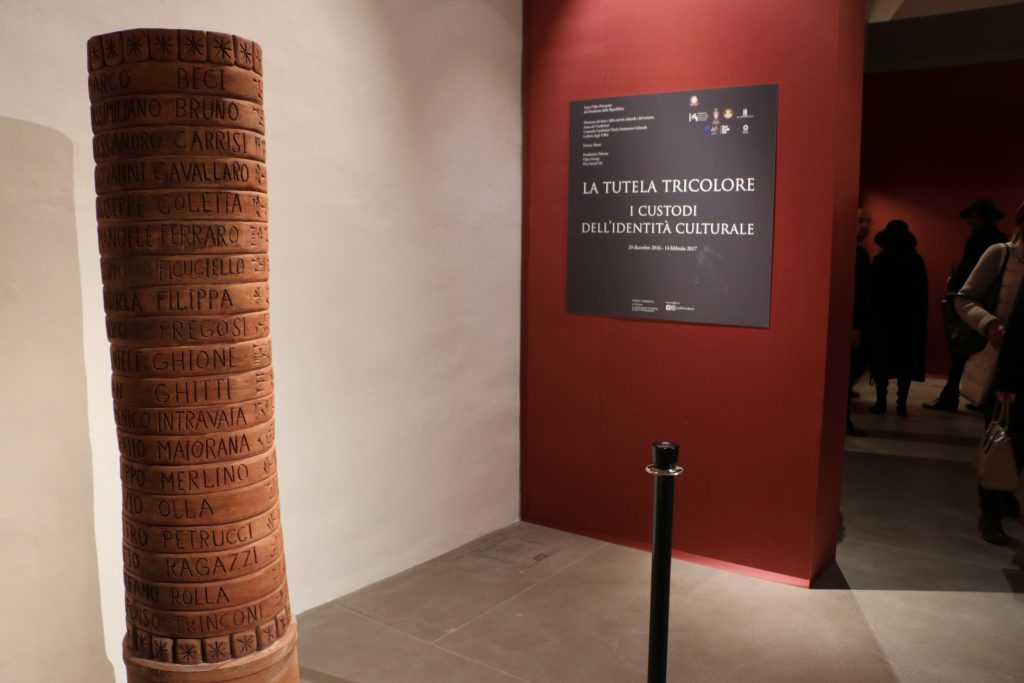 The exhibition, generally held in the Reali Poste area which is now in the New Uffizi renovation phase, inaugurated a newly restored eastern section of the Uffizi which will host from now on the Uffizi’s temporary exhibitions.

“La Tutela Tricolore” highlights and honors the work of the special police forces dedicated to recovering stolen and missing artworks from Italy. Over the past 50 years, the Comando Tutela Patrimonio Culturale dell’Arma dei Carabinieri in Italy has recovered over 1 million pieces of archeological pieces and over 750,000 paintings.

The exhibit is divided over several sections that illustrate the importance of art and history in our cultural identity as well as how their possession or destruction is used as a force to destroy people. Going through each room you will be able to see various facets of their recovery, as well as works of art that can now be admired thanks to the work of these special forces dedicated to protecting and recovering artistic patrimony.

I have to be honest and say that before stepping into this exhibit I hadn’t ever really considered art in this context. I have also learned of the many facets this can take. Take, for example, how crime against art can be committed. From war and human conflict to natural disasters to planned robbery and illegal digs for export. Terrorist acts such as the bombing of the Uffizi itself in May 1993 by the Italian mafia. The exhibit, however, while pointing out all of the instances where art can be harmed, is focused on those who would protect it. As an important part of any nation’s cultural heritage, but especially important for Italy’s, you’ll learn of Rudolfo Siviero, an Italian minister who during World War 2 created a list of all of the artwork that was taken by Nazi Germany or disappeared from churches, museums, and private collections. Siviero went on diplomatic missions to Germany to obtain recognition of those works, reaching agreements to have parts returned. That list continues today to be in use by the special forces, following traces and clues to their recovery. On exhibit, you’ll see such pieces such as the Domus Virginia from Lastra a Signa recovered only in 2014 as well as several pieces of the “La Carica dei Bersaglieri”, a work stolen in WW2 and cut up into pieces in order to make it easier to sell.

On display are also items from archeological sites, stolen and exported illegally to be sold on the black market, often to complicit buyers. Just in 2001, the US and Italy signed an agreement that permitted the return of several such items from Boston, Los Angeles and Ohio.

A section of the exhibit shows works that have never been on display before in Italy, having only recently been recovered by the Carabinieri dell’Arte. This includes the Carro of Eretum recently returned from Copenhagen, a jade dagger belonging to the Stibbert collection in Florence, the illustrated pages of a chant book from the Santa Verdiana church in Castelfiorentino in Tuscany.

Today, there are those who still see such marvels and beauty and covet to have them in their possession. Consider the magnificent Castellani jewelry collection donated to the National Etruscan Museum of Villa Giulia in Rome. A wealthy Russian woman wished to have them in her hands and commissioned a robbery of the jewels you’ll see on display. They are truly beautiful, but any woman today might simply commission a copy inspired on those jewels. Not this lady: the originals had to be stolen, but luckily the robbery was interrupted and the jewels recovered. This all in the very recent 2013.

Lastly, consider again wars and the ongoing conflict in Syria and other parts of the Middle East. Either artistic sites are sacked on purpose and items sold to obtain funds for continued purchase of arms or just destroyed. What role do we play in making sure this is not encouraged, that it does not happen? Italy once again is at the top of international forces, forming the unit “Unite4Heritage” this past February 2016 to help UNESCO and any member states identify the real threat to these sites and go in and protect and preserve in crisis situations the heritage of not just one state but of the world’s cultural heritage and identity. This also works in cases of natural disasters, such as earthquakes. Central Italy was hit by several earthquakes since this past August and the unit went it to salvage and recover what items could be recovered. You can see some of these artworks in Siena from now until October 2017 in the just opened documental exhibit “La Bellezza Ferita” which we went to see this past weekend (and which we will write up a review soon).

Take a moment this holiday season or up until February 14, 2017 to stop by this very special exhibit at the Uffizi that will open a new door into the appreciation of the importance of art in our identity and history.

La Tutela Tricolore: The Custodians of Cultural Identity
December 20, 2016 – February 14, 2017
Open Tuesday – Sunday from 10am to 5pm
Closed Mondays
Entrance is FREE – enter through entrance 2 at the Uffizi, turn right past the first bookshop, then left to enter the exhibit.