The Accademia Gallery: Beyond The World's Most Famous Silhouette

If you're thinking of visiting the Galleria dell’Accademia, you're most likely target are the magnificent giant marble sculptures created by Michelangelo, and above all, the glorious David. If you explore the museum with a bit more time, the Accademia will offer you much more in the less crowded halls, satisfying any curiosity for botany, music, art symbols and painting techniques.

The Hall of the Colossus 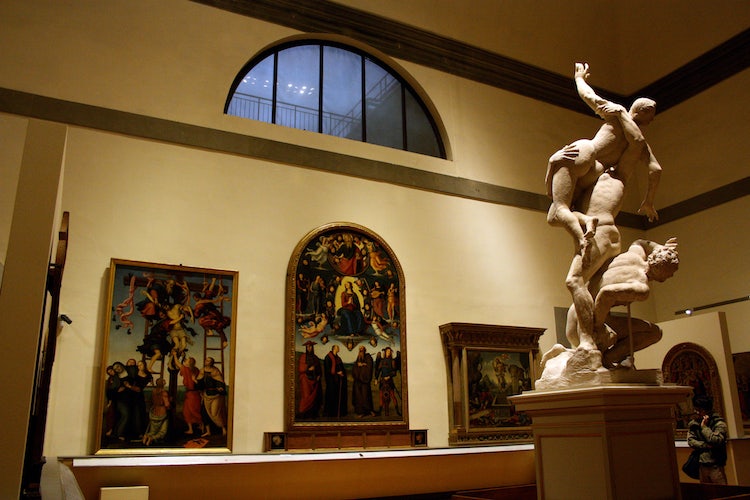 The Accademia welcomes the visitor in the Hall of the Colossus, name taken from the huge models of the Dioscuri of Montecavallo which were displayed in this large hall in the 19th century. It now hosts in the center the plaster model for the stunning marble sculpture of Giambologna’s Rape of the Sabine Women. Giambologna prepared the model as an exercise in creating a tightly-knit group of three figures from just one large block of marble. He did not actually name the sculpture, it was meant to be as a “simple” exercise of skill and it became the first example of such magnificent talent. 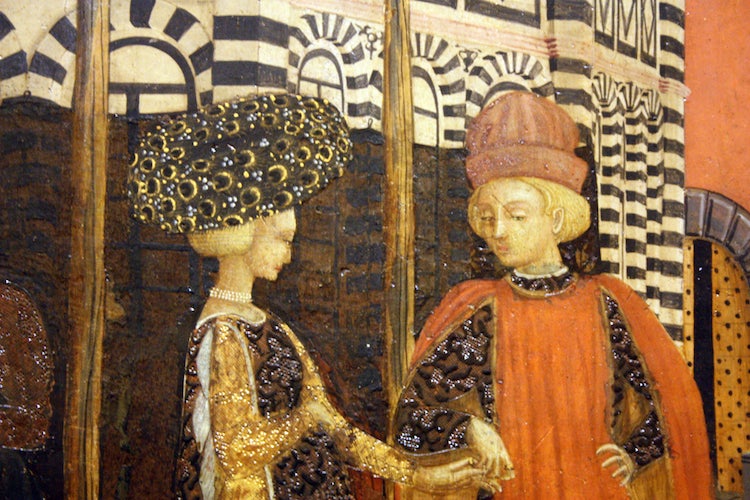 Your glance will land upon the large number of panel paintings hanging on the four walls, such as works by Perugino, Filippino Lippi, Pontormo, Domenico Ghirlandaio and Bronzino. You might feel overwhelmed  at first sight but if you take a seat around Giambologna’s plaster, you may comfortably enjoy this rich Renaissance collection and recognize two of the most important works. Next to the entrance on the right you’ll clearly pinpoint a narrow rectangular chest (Cassone Adimari). It is the front panel of a wedding chest belonging to the Adimari family, depicting a typical Florentine Renaissance wedding feast and portraying medieval streets, monuments (Baptistery on the left) and precious brocade garments witnessing the customs and wealth of the noble families of the 1450s.

The Galleria museum, as Florence's second most popular museum, also often has a long line. Despite the slightly higher cost of entrance, you could reserve your tickets online.

Left to the  chest, you cannot miss a small shaped panel by Botticelli, the Madonna of the Sea. It owes its name to the dim seascape in the background and its charm is preserved in the gold fine details and symbols defining the two characters. The pomegranate held by baby Jesus, symbol of Christ passion and the star “Stella Maris”, glittering on Mary’s dark blue robe. 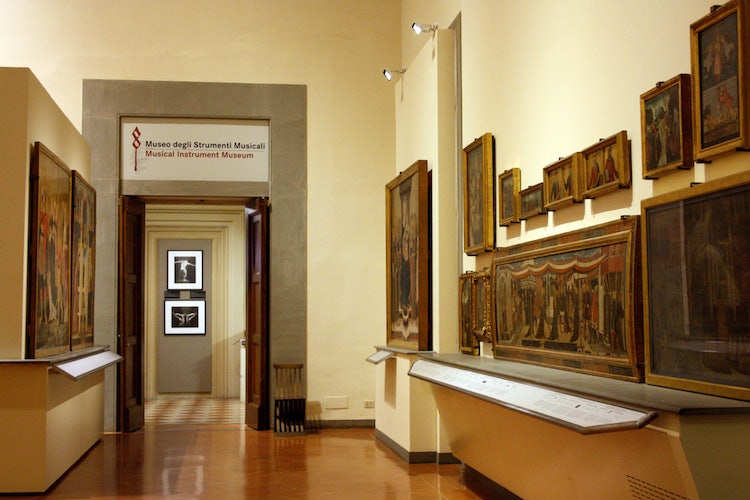 If you go crazy for opera, theater and classic music, the Accademia is one of the best places you should visit. It hosts in fact the Grand Ducal collection of forty instruments exposed in the museum wing belonging to the Luigi Cherubini Conservatory. The collection unveils that music played a primary role in the official celebrations of the Medicean Court. Discover the roots of the invention of the Piano, created by Bartolomeo Cristofori for the Medici and explore the collection of Harpsichords, violins, violoncellos an wind instruments. Not to miss the original handmade Antonio Stradivari red spruce and maple wood “Medici violin” besides the multimedia explanation of the grandiose festivals arranged in town by the Medici in villas or theaters expressing proudly the richness of the fine cultural atmosphere of the 17th century.

Hall of the Prisoners and the Tribune: Michelangelo's David and the Slaves 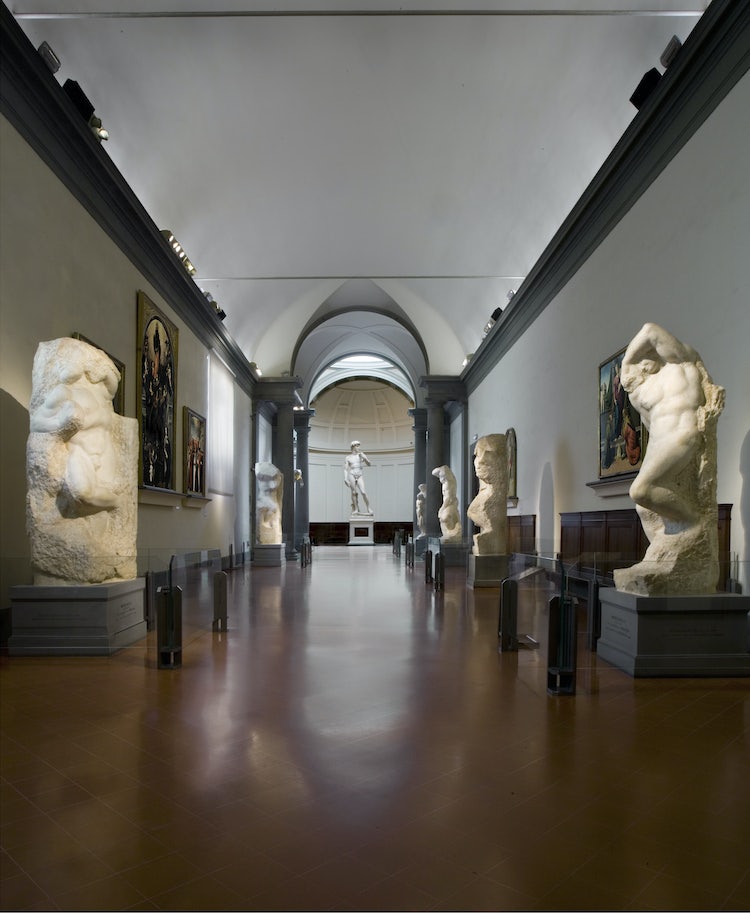 The most famous section of the Galleria is surely the Hall of the Prisoners, displaying Michelangelo’s unfinished “Slaves”. Today the arrangements of the Prisoners along the corridor is a growing crescendo of emotions to the feet of David, exposed under a circular skylight. Next to the Tribuna of David you’ll find a series of paintings by Alessandro Allori which are a delightful vocabulary of the symbolism of flowers. Chase the key for explaining hidden messages among a triumph of botanical species like tulips, daisies, lilies, lilies of the valley, citrus and forget-me-nots are displayed a few steps from David. 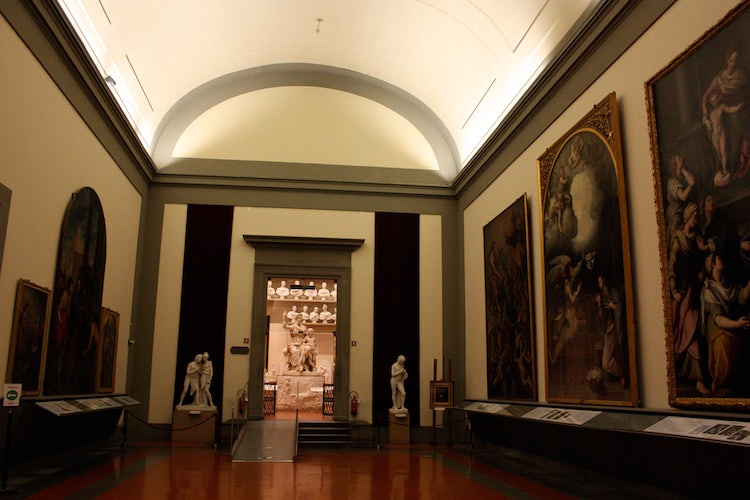 Next to the Allori large panels you’ll find the antic roots of the museum, the ancient core of the hospital which now is part of the Galleria dell’Accademia. In 1784, the Grand Duke of Tuscany, Pietro Leopoldo, converted the friary hospital of San Matthew and the convent of San Niccolò di Cafaggio to house the Gallery so students in the adjoining Accademia delle Belle Arti (Fine Arts Academy) could study the greatest works of the past. Exactly in the “Gipsoteca Bartolini” you’ll find traces of the 19th century plaster casts by Lorenzo Bartolini, one of the greatest sculptors and brilliant professors of the Academy. 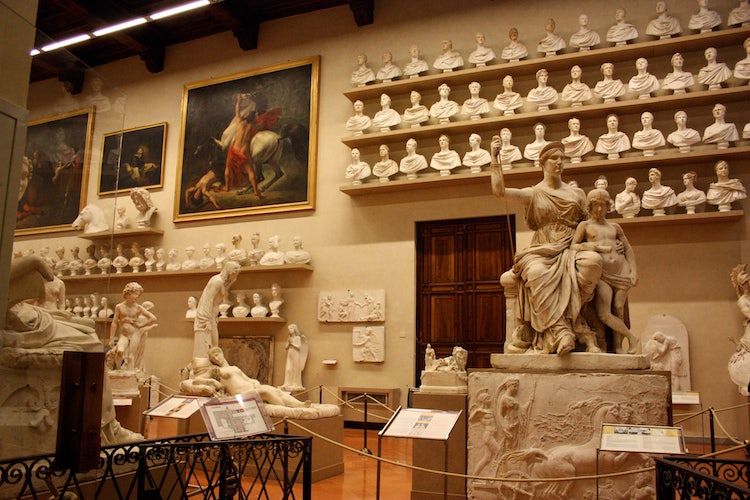 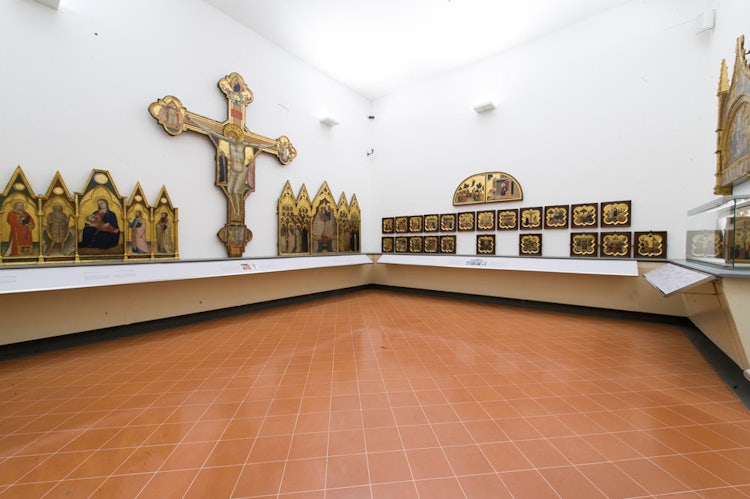 The last section of the gallery downstairs is dedicated to Florentine Gothic painting. Gold backed altarpieces by Giotto and his followers like Bernardo Daddi and Orcagna constitute an invaluable art collection coming from the most important Florentine churches and antic suppressed convents. Brilliant colors of the recent restorations will introduce you to the fashion style and hairstyles of the Florentines of the Middle ages and Renaissance! 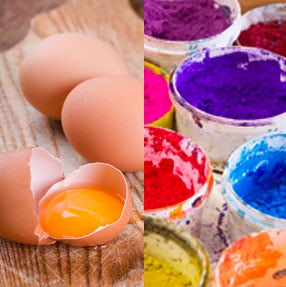 Even if most visitors get out from the museum after these last rooms, I do encourage you not to miss the first floor of the Accademia, which is the definitely less crowded but very involving and informative (Giovanni da Milano & the Late 14th century rooms). It will give you the chance to learn how the altarpieces were prepared carefully starting by the selection of every poplar wood central vein. A video focusing on egg tempera painting shows clearly how the drawing was created on the wood altarpiece, carefully decorated first with gold-leaf application and eventually painted with a mixture of natural pigments and egg yolk. You’ll be fascinated by this antic technique described by the Renaissance painter and illuminator of manuscripts Cennino Cennini. These antic techniques are sill alive in Florence in the fascinating art craft laboratories of the restorers! 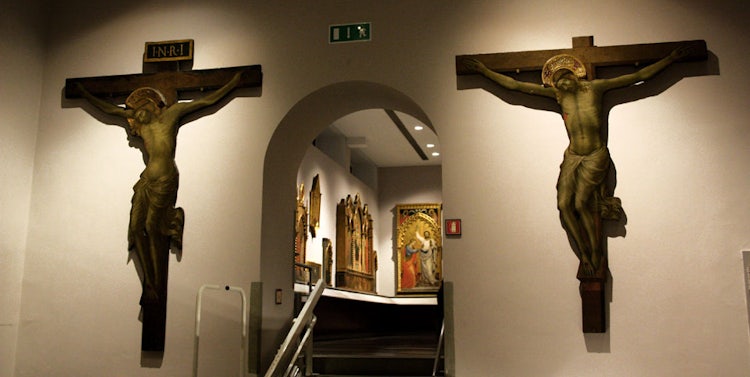 I adore the Accademia above all late in the afternoon when the museum is surely more enjoyable. The museum offers late openings in the summertime and exploring it with calm allows to meditate on the value of “time” at the age of Michelangelo and the skillful Florentine artisans…slow living, talented enlightened minds and creative patience.

+ € 4 prebooking fee + online commissions depending on where you book online

We enjoyed our guided tour of the Accademia...