Bardini Gardens in the Center of Florence

Be Prepared to be Wowed

A city like Florence, well known for its amazing art collections, monumental architecture and rich historic past can sometimes have you forget about the natural beauty that abounds in the form of well maintained gardens and parks. And then, when you do think about them, it is places like Boboli Gardens, the colorful Iris and Rose gardens, and even the Botanical Garden in the city center that come to mind first.

The magical silence and stunning architecture in the Bardini Gardens seem to get lost in the crowd of places to visit while in Florence. 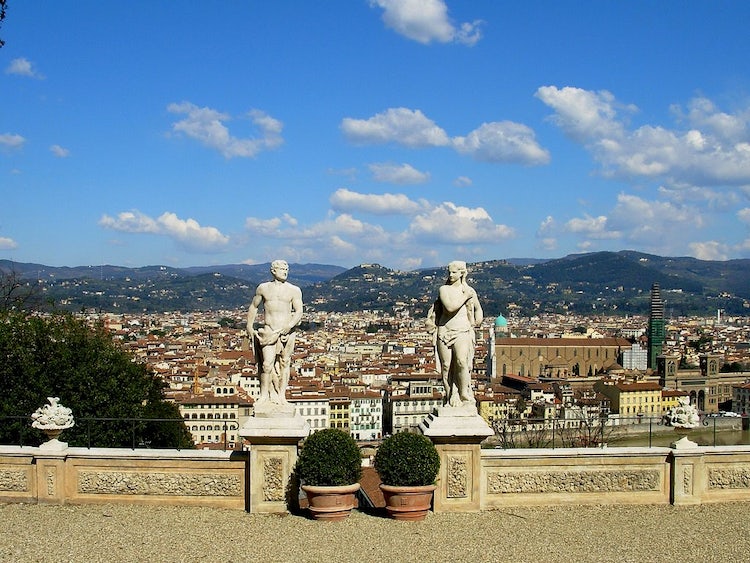 Not many local people really know of this gem, and at moments it isn't that crowded (not while the wisteria is in bloom, though). The 4-hectare garden was restored in 2006 to part of its original glory and is slowly being discovered by locals and visitors to the city of Florence. First time visitors to the Renaissance city just might not have time to fit it into their already full itinerary; however, those who are coming back to Florence again (and again and again) should really find time to walk the grounds. In an hour you can stroll the entire garden easily and calmly, and that is what this garden deserves: time for a short stroll that will soothe your soul. If you have a book in hand, then head here and add an extra hour to just hang out and enjoy the views and your book.

My first visit to the garden couldn’t have been more impressive. I arrived shortly after it opened one warm, sunny April morning. The terraced position over the Arno River, and just above the awakening city, formed a sort of cocoon, where only the chattering birds and occasional butterfly kept me company. You should aim to enter through the Via dei Bardi entrance near the Arno, and slowly make your way up (but if you're already at the top of the Boboli gardens, near the Forte Belvedere, and the gate is open, you could decide to head to the Bardini gardens which are already included in your entrance ticket and enter from the Costa San Giorgio entrance, at the top of the hill, then make your way down). 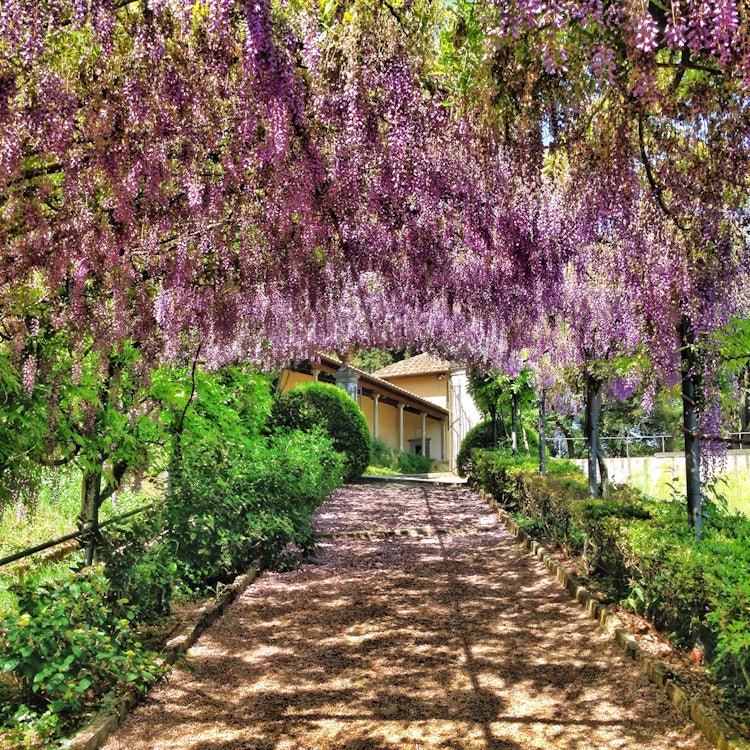 The first round of blooms were already decorating the gardens and the wisteria tunnel was in the beginning of its spectacular show (which occurs in mid April - beginning of May, more of what you see in the photo above). It was the perfect moment to admire the Baroque style stairwell and the mini-gardens on each terrace.

The baroque flight of steps is the most picturesque part of the garden, with its viewpoint over the city and the six fountains with their multi-material mosaic bottoms.

If you turn around at this point, the skyline of Florence will spread from left to right. You will be close enough to admire the detail on the major monuments, but the distance creates a buffer for the daily noise of the city. Each time you move up to a new level, surprising views opened up over Florence, framed by the various trees in the garden that were in bloom. The panoramic views are decidedly a winning feature of the gardens. 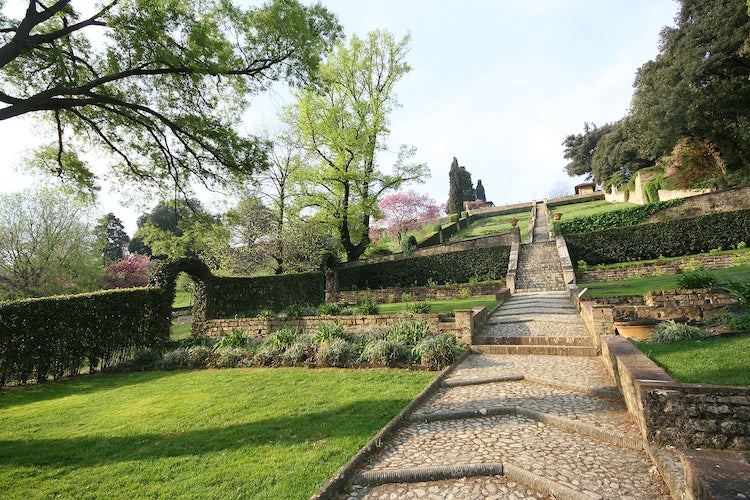 Gardens as Florence's Back Door

You will need to venture to the “Oltrarno” to find the Giardino Bardini. There are two entrances, as mentioned above: one at Via dei Bardi 1r, close to the Stefano Bardini Museum and the Ponte alle Grazie. You might find yourself looking for a green area or a picturesque garden gate; however, when you enter from here you go first into a stone building where you will find the ticket office. From here you will take some stairs up to the gardens (there's also an elevator if you happen to have a stroller). The entrance walk into the gardens will have Florence to your back, and if you turn around you will have a view over the red terracotta rooftops and the Arno River.

The second entrance is from Costa San Giorgio 2, right next to the Fortezza Belvedere, along the medieval walls that surrounded Florence and an exit of the Boboli Gardens. This is where you also enter to the Villa Bardini itself where a variety of temporary cultural and artistic exhibits take place during the year, but to visit that you have to pay a separate ticket. 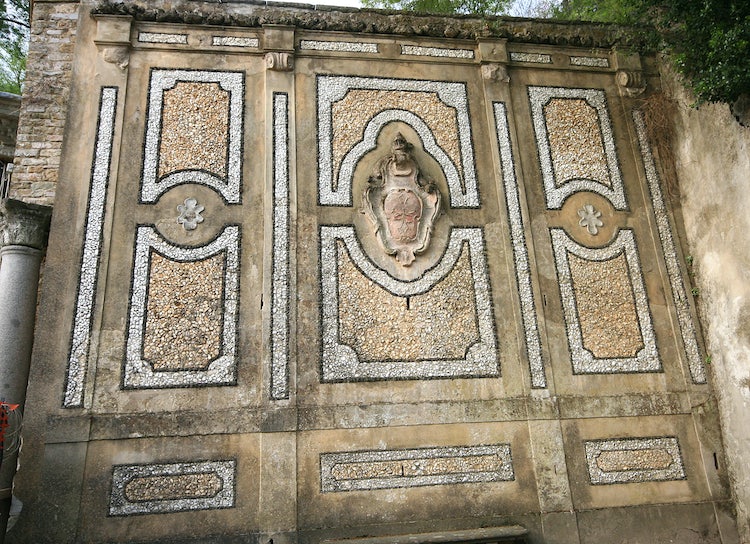 or buy your ticket now.

All of this area was a fruit orchard. Today you can find apple and pear trees along the way as you climb up. In medieval times, gardens were nice but they also usually had a practical goal. The position just outside the city walls was fundamental for supplying the family with food. The land for the garden and much of the hillside belonged to the Mozzi family, with documents showing it to be already a “garden” as far back as 1259.

The Mozzi family lost their property and then gained it back again in the late 1500’s. They managed to keep it in the family until 1880, when the family died out. During their possession, they continued to modify the gardens adding statues and flowers. They even purchased adjoining properties which added part of the Kaffeehaus along with it’s “grotta” (a man-made cave). After the last Mozzi passed away, everything was bought by Carolath Benten, and the garden took on various “Victorian” aspects.

It wasn’t until Stefano Bardini, the namesake of the gardens, came into possession of the land and villa that it began to take on its present shape. Unfortunately, in doing so, the medieval aspects have been lost, but one must certainly admire the changes he made which have left us with a unique masterpiece. It is this strange mix of styles which create an enchanting garden to explore. 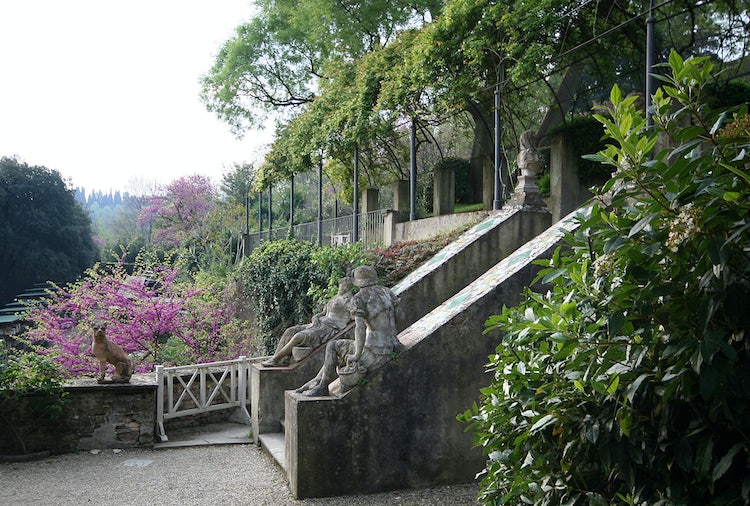 The gardens were left to his son, who then passed them over to the city of Florence upon his death. They remained untouched, overgrown and in horrible condition until the year 2000 when a massive restoration project brought them back to life again.

Highlights in the Garden

Reopened to the public in 2006, only a few years after a massive restoration project, the garden flashes brightly colored azaleas, viburnums, camellias, roses, irises and 60 varieties of hydrangea next to a more “functional” garden with a wide collection of apple, pear and olive fruit trees.

Undoubtedly, the most scenic part of the garden remains the great Baroque staircase and the wisteria tunnel, both of which lead to the Kaffeehaus and restaurant. The staircase built in the seventeenth century was enriched with statues and fountains at the end of the eighteenth century by Giulio Mozzi. From the panoramic terrace, in front of the restaurant, you can enjoy a spectacular view of the city. Nearby, there are six fountains decorated with mosaics and a wide range of roses and iris flowers, as well as hydrangea and other decorative plants.

The Belvedere loggia was also a creation of Stefano Bardini’s: by enlarging the two small Kaffeehaus buildings in the eighteenth century and linking them using sandstone pillars from Pistoia, he created a grandiose finale to the scene of the stairway.

At the top of the garden and to the right, you will find the Fontana del Drago, part of the Anglo-Chinese garden with a canal running along the one side. This area is part of the acquired land and its building was started by Jacques Louis Le Blanc at the beginning of the nineteenth century. It was designed to surround the seventeenth-century villa Manadora (now part of Villa Bardini). 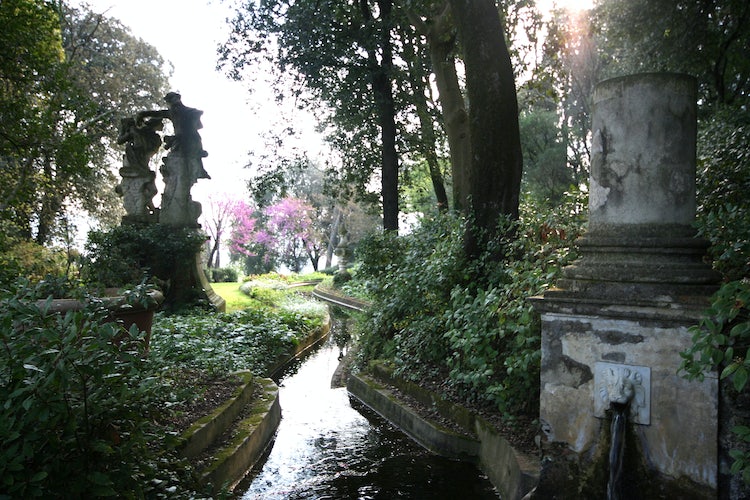 The “dragon” feeds the canal which was excavated and restored before the reopening of the gardens; it borders the grassy English style yard dotted with statues and blooming plants. The presence of a canal is quite unique in Florence's gardens and is considered one of its distinguishing characteristics. The Villa Bardini borders the other side of this garden, and the paths open to a panoramic position over the garden, Baroque stairs and Wisteria display.

The third garden within the Bardini Gardens is that of the fruit-trees, including several varieties of pears, plums, peaches and cherries.

a collection of ancient fruit trees common in Tuscan gardens together with four examples of fruit tree cultivation were introduced: espaliered, cordoned, “free range” and dwarf

The European Garden Heritage Network (also known as EGHN) have included "Giardino Bardini" in their selected gardens to visit in Europe and their webpage offers a very detailed description for those who are passionate about Renaissance gardens. 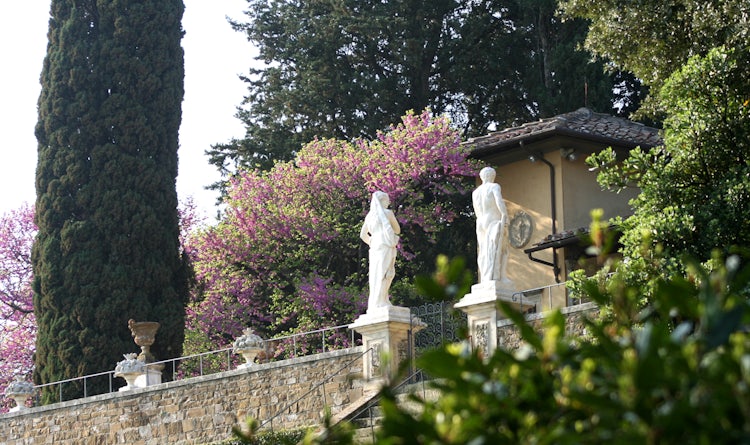 While you tour the stone and mortar jungle in Florence's center, if you ever feel the need to get away into a secluded yet panoramic green corner where you can relax, remember the Bardini gardens. The garden is inviting and spectacular all year long, yet Spring is when it truly shines with most of the greenery blooming in one form or another, with many colors. Plan a visit at any time of the year, because the green is the border that frames the splendid views of the Renaissance city below.

2 entrances, one at the bottom and one at the top of the gardens (on a hill):
- Via dei Bardi 1/r (bottom)
- Costa San Giorgio 2 (top, perfect for those visiting the Boboli Gardens first and then exiting through the exit right by the Belvedere Fortress)

Free entrance every first Sunday of the month, every day for residents of Florence.

(entrance into the museum requires a separate ticket)

Hours are seasonal:
The garden is open every day from 10am to 7pm
Closed on the first and the last Monday of each month, New Year’s Day and Christmas Day.

Useful information and an itinerary with Luca della Robbia, Greek...