More than just a garden, it is a place of historical importance for Florence

More than a garden, more than just a “green lung” in Florence, the Boboli Gardens are one of the greatest open-air museums in Florence that embraces another site of culture in Florence, the Pitti Palace. The park hosts centuries-old oak trees, sculptures, fountains and offers peaceful shelter from the warm Florentine sun in summer, the beautiful colors of the changing foliage in the fall and smells of blooming flowers in the spring.

The Boboli gardens are a spectacular example of "green architecture" decorated with sculptures and the prototype which inspired many European Royal gardens, in particular, Versailles.

Check the box on the right → to view all useful details needed to plan your visit to the Boboli Gardens!

Guided tour of the gardens

If you'd like to enjoy a short 1.5hr tour of the gardens with an expert guide, we recommend a guided tour. This one is perfect for families and takes you to see the beautiful statues, grottos, and more while learning of its history.

Its creation and development spans four hundred years, from the 15th and 19th centuries. The original fields and gardens were laid out behind Santa Felicita in the Oltrarno by the Borgolo family, the name from which Boboli is thought to derive, and were bought in 1418 by Messer Luca Pitti. In 1549, the property was purchased by Cosimo I's wife Eleonora di Toledo, and was greatly enlarged to became the Medici family's new city residence.

The original plan at that time was drawn by Niccolò Tribolo, although the complete works were completed only after his death in 1550 by other court architects, including Giorgio Vasari, Bartolomeo Ammannati and Bernardo Buontalenti under the reign of Francis I, who succeeded his father Cosimo.  The Medici and the Lorraine families continued to enrich and enlarge the garden in the 17th, 18th and 19th centuries generating an outdoor museum, the scenic  setting to exhibit both Roman and Renaissance statues.  Along your walk, you will discover the highlights of the gardens, in particular the Amphitheatre, the “Viottolone”, the Garden of the Cavaliere, the Koffeehouse and the Grotta Grande. 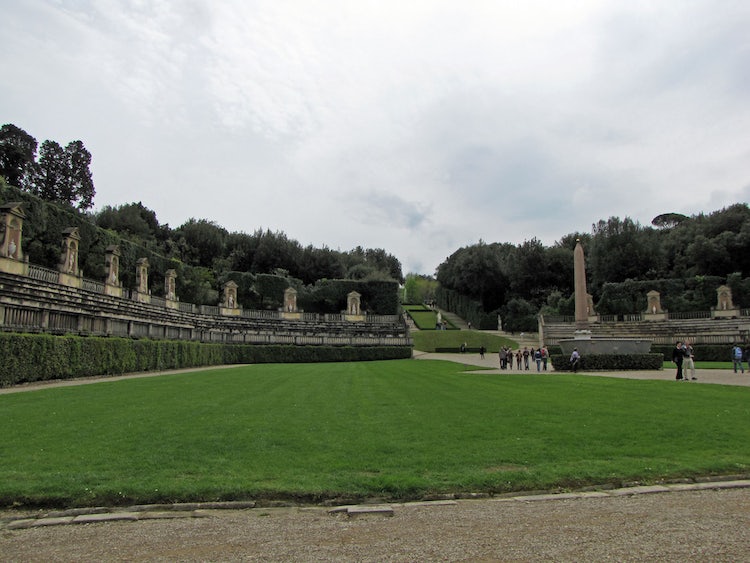 Do you want to visit other gardens while you're in Florence? Take a look at our list which includes some with wonderful views!

If you want to visit the Boboli Gardens and the Bardini Gardens with a private guide, then this 3 hour tour (mornings or afternoons) is ideal to explore them both!

At the start of your visit, after crossing the Pitti Palace's courtyard known as the “Cortile dell’Ammannati”, a first staircase leads up to the “artichoke” fountain whose large octagonal basin is decorated with numerous statues and crowned by a bronze lily. Because of its shape, the fountain was nicknamed artichoke by the Floretines, as they can sometimes be quite harsh in their judgements. From here, the sight opens up on to the large "amphitheatre" adjoined to the hill behind the palace. The area was initially created because stone was excavated from the hillside for the palace itself, but it's shaped proved to be perfect for an amphitheater. The hedges and evergreen meadows were only later on decorated with statues based on Roman myths. The shape of this area reminds one of half the shape of a classical hippodrome. The Egyptian Obelisk standing in the center was actually brought from Luxor and placed in this precise location in 1789. 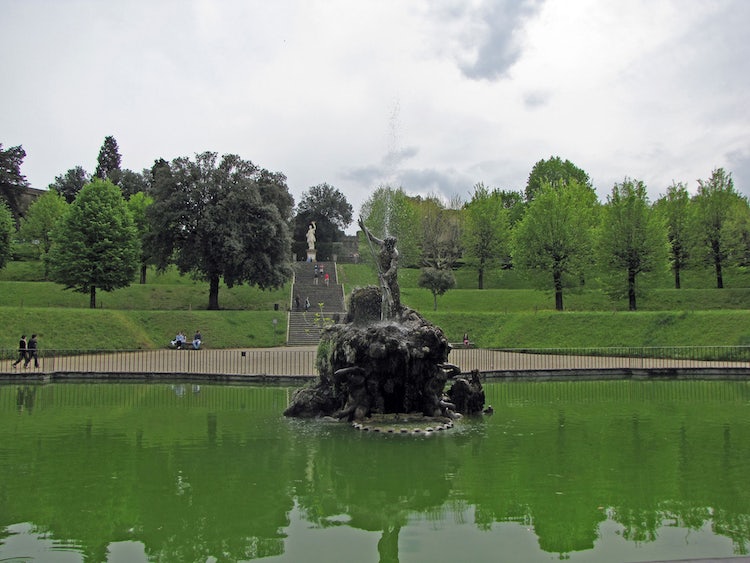 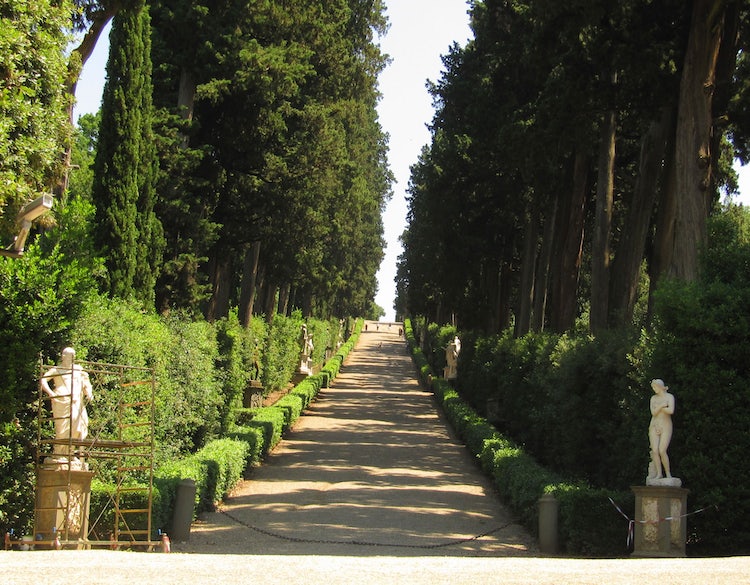 A steep sloping avenue heads back down the hill toward Porta Romana, with a series of terraces and tunnels formed by the trees and foliage offering shade and hidden corners to sit down and enjoy a good book or conversation. The "Viottolone”, or a large avenue, is flanked by cypresses and statuettes that then lead all the way down to the "Isolotto", the large pond begun in 1618. In the centre of the pond, you can admire the fountain called "Ocean" created by Giambologna on the island, surrounded by three sculptures representing the Great rivers of the Nile, Gange and Euphrates. Emerging from the water surrounding the island are the marble groups of Perseus on horseback and of Andromeda, whose ankles are chained to the rock. 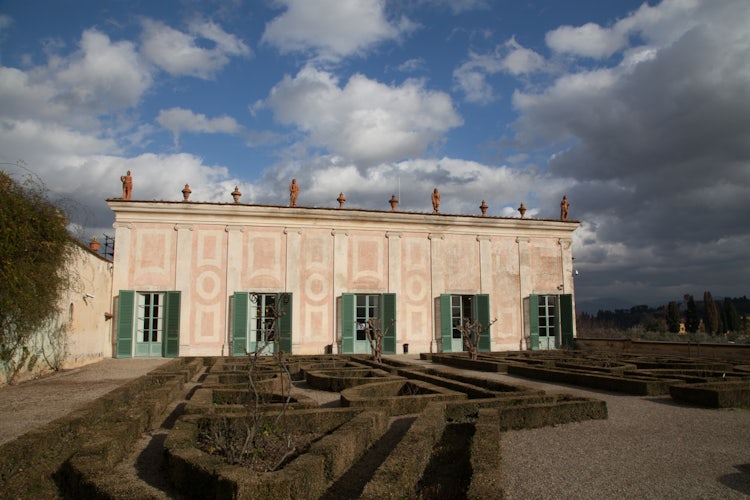 On the cavaliere, or rampart of the walls built by Michelangelo in 1529, stands the Giardino del Cavaliere, reached by a double staircase, at either side of which stand two statues of the Muses. From this colorful meadow, rich with blossoming roses in May, you may enjoy a wonderful view of the Torre al Gallo and elegant private Florentine manors nearly hidden inside the lavish vegetation of the hills. Next to this garden is the building that houses the Porcelain museum of the Pitti Palace while underneath the building is a large water storage area known as the "trout reservoir", from which the pipes that supply water to the entire garden lead off. 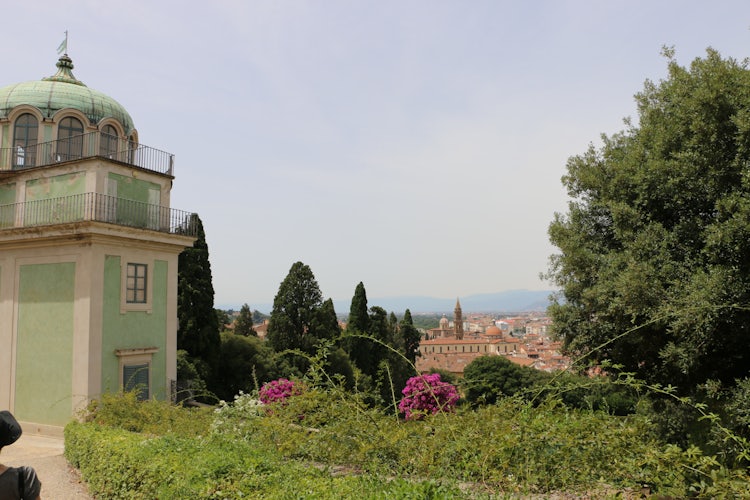 Private Tour of Pitti and Boboli

If your time is limited, I highly recommend a private 3 hour family-friendly tour of the main museum in the Pitti Palace, the Palatine Gallery, and of the Boboli Gardens to see the highlights. Runs year-round, from 8.30am to 3.30 pm every half hour.

The Lorraine family made further additions in the 18th century, including the green "Kaffeehaus" with its glazed dome, and the "Lemon House" designed by Zanobi del Rosso. In the same period, the Lorraine’s entrusted the building of the Neoclassical Palazzina della Meridiana (or Sun-Dial) next to Palazzo Pitti to Gaspare Maria Paoletti (1778) which today hosts the Costume Gallery within the Pitti Palace. The Prato della Meridiana in front of this building is a large, steeply-sloping lawn, from which smaller avenues dotted with statues lead off.

The view from this corner of the gardens is great! 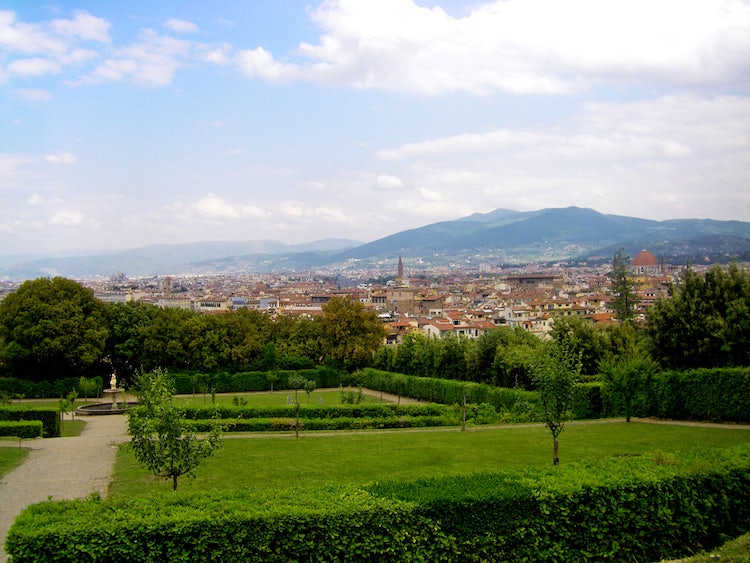 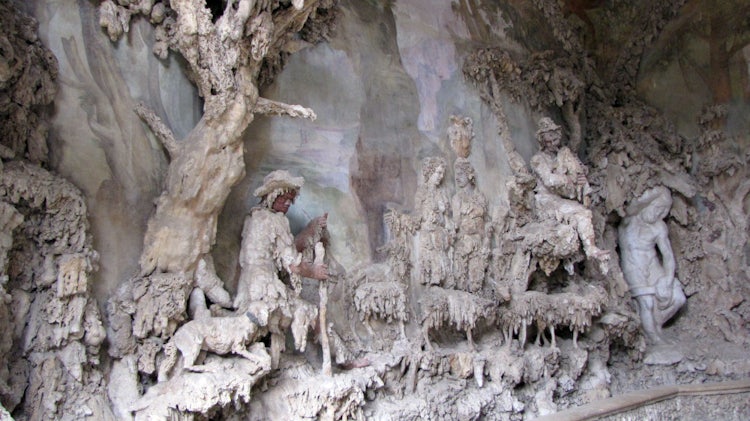 Decorated internally and externally with stalactites and originally equipped with waterworks and luxuriant vegetation, the Large Grotto is divided into three sections decorated with remarkable examples of Mannerist sculptures. The first one was frescoed to create the illusion of a natural grotto, a natural refuge for shepherds to protect themselves from wild animals. It originally housed The Prisoners by Michelangelo which are now in the Accademia Gallery. The third and furthest hall in the grotto contains Giambologna's famous Bathing Venus and the second section contains Paris and Helen by Vincenzo de' Rossi. These last two chambers were created as the perfect setting for the secretive, amorous meetings of the Duke Francesco I de’ Medici. 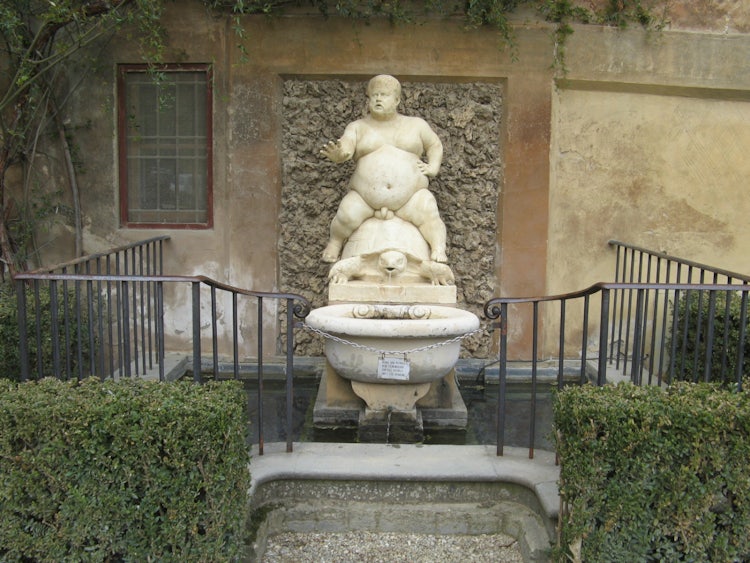 For those trying to escape the warm summer days in town, the Boboli Gardens offer the perfect antidote. My favorite area is the Koffeehouse which has been recently reopened to the public and the enchanting side avenues off the Viottolone, whose pergolas of helm-oaks and welcoming low stone seats offer the perfect spots to relax and enjoy the silence of the gardens.

At the end of your walk as you exit near the Palazzo Pitti, don’t forget to wave “bye” to the court dwarf Morgante who rides a tortoise!

Every first Sunday of the month entrance is free for everyone! Local residents of Florence can enter free any day of the year, but through a different entrance on Via Romana.

Closed on the 1st and last Monday of each month (except between June and October), January 1 and December 25.

It is possible that the schedule can change or temporary closings take effect if the weather does not permit a safe visit for people inside the gardens.