A home to pay homage to the family genius

Rumors suggest that Michelangelo never lived at this address, but there are documents that demonstrate during the time he worked at the Medici Chapels that he did in fact live here with his nephew Leonardo (spelled as Lionardo in documents).

Though the name of the museums may suggest this to be the great artist's home or where he was born, the building which you see before you now was started in 1612 and took 30 years to build, furnish and decorate. This is therefore 48 years after his death.

Casa Buonarroti does however incorporate two designs by Michelangelo himself. The building which stands at via Ghibellina 70 is organized on three floors and is actually the joining together of several pre-existing properties - and one of these properties is where Michelangelo did in fact live before being called to live closer to San Lorenzo during his work on the the sacristy. 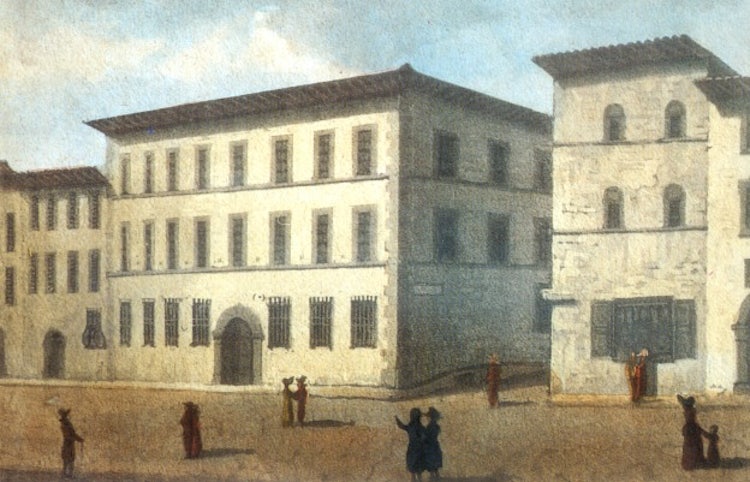 In Memory of the Buonarroti Family

The collection that you see before you was intended at an early stage by the surviving family members to honor Michelangelo and his work, as well as the family "Buonarroti", by collecting and documenting their greatest achievements. The building and monument managed to stay in the family with a few interesting episodes and mostly due to Leonardo's (Michelangelo's nephew) final will and testament imposing particularly "coercive clauses relating to the loss of firstborn rights and family allowances in the event of a change in the destination of the rooms, alienation, dispersion, concession and any other non-improving modification"!

Michelangelo the Younger, Leonardo Buonarotti's son, is responsible for creation of the 4 monumental halls on the first floor as well as a room where he collected numerous pieces, both ancient and modern, for his private collections.

At the beginning of the eighteenth century, the property was inherited by Filippo Buonarroti, not because of the rights of the firstborn, but rather because of his reputation as president of the Etruscan Academy of Cortona, member of the Academy of Crusca, scholar and worthy archaeologist. This passage of inheritance was responsible for the size-able and notable collection of artifacts within the museum. 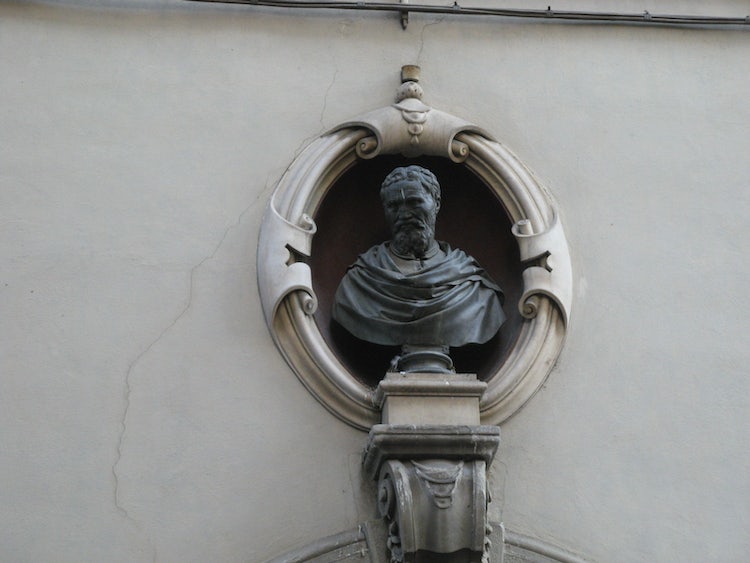 It is presumed that Filippo’s revolutionary activity marked the property for seizure and, in 1799, the Austrian presidium governing the city of Florence decreed the confiscation of the Buonarroti heritage, which was then assigned to the Santa Maria Nuova Hospital. It was later given back to the Buonarroti family, in deplorable condition, to the last living male heir, Cosimo. In 1858, after the expiration of the Buonarroti male bloodline, the palazzo and its contents were turned over to the state.

The museum has a collection of exhibits featuring rare art, paintings, sculptures, majolica ceramics and archaeological findings. There is also a substantial number of designs and drawings by Michelangelo, which are available for viewing on an academic level (upon request only), cultural exchanges and a select few on a rotating basis are always on display for the public.

The ground floor is comprised of an exhibition area where the museum prides itself in presenting special shows during the course of the year. There is also an archaeological collection, as mentioned above; the nucleus consists of about one hundred and fifty pieces encompassing very different dimensions civilizations, epochs, typologies, and techniques.

Of the several rooms to visit, one of the highlights is "The Gallery". The objective of this hall, created between 1613 and 1635, is to praise Michelangelo through a ” singular biography of images” painted by some the more important artists working in Florence in the early 1600’s. As you study the walls, you will note they tell the story of his life by exalting his public works, his private actions and finally on the ceiling his virtues. 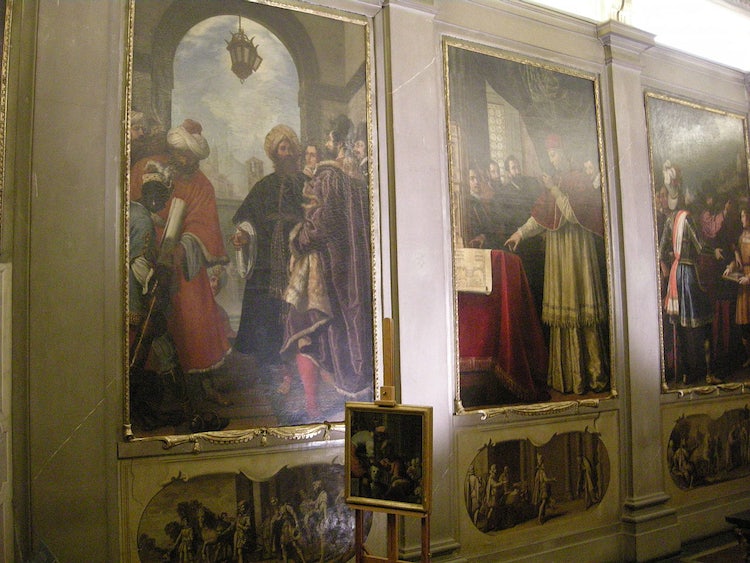 Some of Michelangelo's recognized masterpieces include finished statues and paintings and some are projections or dreams, like that of the facade of the Basilica San Lorenzo church. It was his idea to transform the rough stone front, and it is thought that he looked towards Rome for inspiration.

After craftily getting rid of the competition, he used his genius to resolve the problem that the architects of the Renaissance times had when trying to apply the classical orders to the irregular façades of the basilica churches: “hiding and forgetting the church's external structure behind the layman of a beautiful private palace”.

The unfinished facade is apparently destined to remain this way. When the supporter of this initiative died, Leo X, it was then supported by Clement VII, also a Medici, who more than tried to resume the works of the facade. Only his death (1534) signaled the end. There have been some attempts in more recently history, for example, for the 500 year anniversary of Michelangelo - but the Florentines protested.

If you are curious as to how it might have looked, then you can see the original model made in 1518. 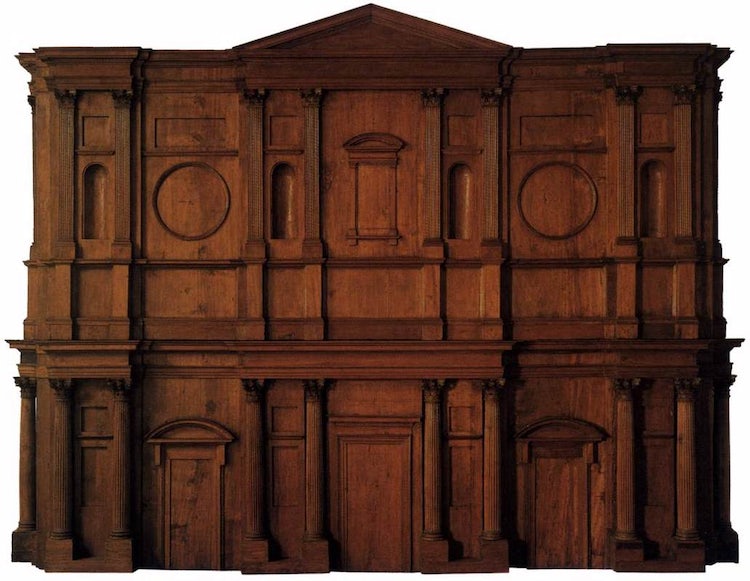 Stiacciato relief: a flat, low relief carving that is especially associated with the 15th-century sculptors Donatello and Desiderio da Settignano. The design is partly drawn with finely engraved chisel lines and partly carved in relief.

The museum houses two of Michelangelo’s first two recognized works of art, which both seem to tell a bit of the story of his artistic development.

a testimony of the passionate study of Donatello

Just imagine at only 17 years old, Michelangelo was already making his mark in the world of art. As you admire this bas-relief display, notice the the detail in the muscle of the mother who is holding the baby child, her large hands and the drape of the robe. 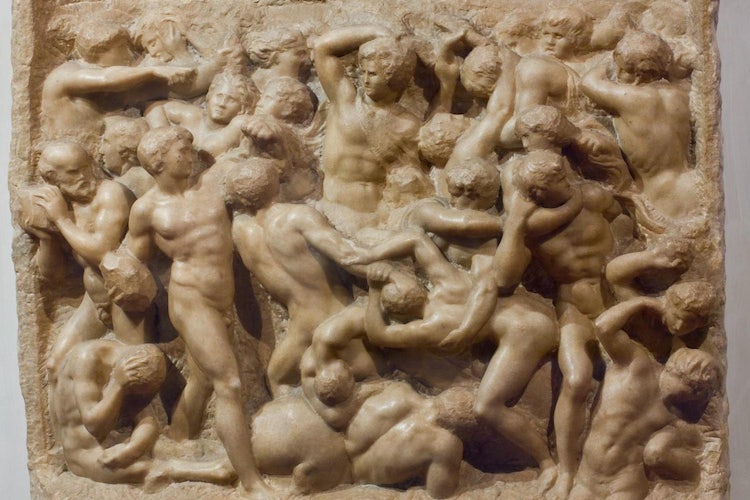 Battle of the Centaurs

a never-ending love for classical art

It was the last work Michelangelo created (yet never finished), while under the patronage of Lorenzo de' Medici, making this the first of several “non finito” sculptures. Michelangelo had departed from the then current practice of working on a flat surface to work multi-dimensionally and bring things alive. This beautiful marble slab depicts the mythic battle between the Lapiths and the Centaurs, a popular subject of art in ancient Greece.

The common theory is that Michelangelo left many sculptures incomplete because he was unsatisfied with the development...Read More about Michelangelo

A Glimpse in Time

Though considered “minor” in comparison with the many great museums that exist in Florence, the size in no way undercuts the importance of the work held within. It is especially of interest for those who look to deepen their knowledge of the man behind the genius and the times in which he lived. The museum also frequently organizes temporary, yet internationally recognized, exhibits which highlight other important aspects of Florentine life.

As you walk through the various halls, you will walk through the story of the Buonarroti family which includes not only Michelangelo and his artistic mastery but also those family members who followed after him who have contributed to the artistic and historic patrimony of the city and Italy.