The final resting place of the Medici family

The Medici Chapels form part of the monumental complex of San Lorenzo. The church of San Lorenzo was the official church of the Medici from their period as private residents in their palace in Via Larga (now via Cavour), becoming their mausoleum which houses most of the family.

Giovanni de' Bicci de' Medici (died 1429) was the first who wished to be buried there with his wife Piccarda in Brunelleschi's small Sacristy.

Later, his son Cosimo the Elder, was buried in the crossing of the church.

The project for a family tomb was conceived in 1520 when Michelangelo began work on the New Sacristy, corresponding to the Old Sacristy by Brunelleschi on the other side of the church. It was above all Cardinal Giulio de' Medici, future Pope Clement VII, who wished to erect a mausoleum for certain members of his family, his uncle Lorenzo the Magnificent, Lorenzo's grandson Lorenzo, Duke of Urbino (1492-1519) and Lorenzo's youngest son, Giuliano, Duke of Nemours (1479-1516). 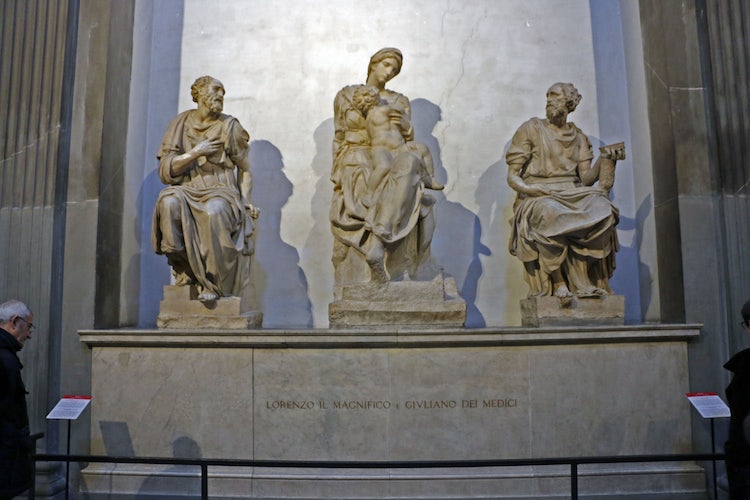 The architecture was complete by 1524, its white walls and pietra serena interior based on Brunelleschi's designs. Entered through the back of the San Lorenzo Church, the chapels are divided into three distinct parts: the crypt, the Cappella dei Principi (Chapel of the Princes) and the New Sacristy.

The crypt is the part where minor members of the dynasty were unceremoniously laid to rest. In the 19th century it was tidied up and now includes numerous tomb slabs.

The Chapel of the Princes has a huge dome designed by Buontalenti and begun in 1604 but not completed until the 20th century. Six of the Medici Grand Dukes are buried here.

The New Sacristy was built by Michelangelo between 1520 and 1534 and is a reminder that the Medici were enlightened patrons. Michelangelo worked on the sculptures of the sarcophagi, but the only ones actually completed were the statues of the Dukes Lorenzo and Giuliano, the allegories of Dawn and Dusk, Night and Day and the group of Madonna and Child placed above the sarcophagus of the two "magnifici" and flanked by Saints Cosmas and Damian. The latter were executed by Montorsoli and Baccio di Montelupo, pupils of Michelangelo.

As a result of the complex history of the chapel and its elaborate symbolism, many interpretations have been made of its sculptures in the New Sacristy. The figure of Night is regarded as one of Michelangelo's finest works. In 1976, numerous drawings and sketches executed on walls were discovered in a small space beneath the apse and sacristies of the church. These drawings, fifty-six in all, show legs, feet, heads and masks, and may be related to the statues and architecture of the sacristy. 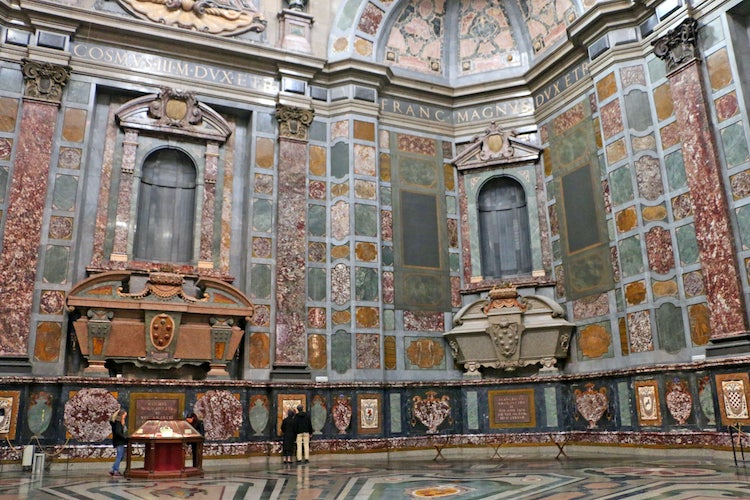 The Chapel of the Princes

The Chapel of the Princes was built by the architect Matteo Nigetti (1560-1649) in 1604-1640 to the designs of Don Giovanni de' Medici, a member of the family who practiced architecture in a semi-professional way. The mausoleum is a rare example in Florence of the Baroque style, and its huge cupola and lavish interior were conceived as monuments to the greatness of the Medici.

Its sumptuous octagonal interior was conceived to hold the grand ducal tombs and is completely covered with hard stones or marble, mainly of foreign origin; the princely sarcophagi are completed with bronze statues of the Grand Dukes set into niches. The execution of the inlay in hard stones lasted for three centuries; the process of covering the walls, mainly carried out in the seventeenth and eighteenth centuries, was fraught with problems on account of the difficulties of working the materials and their very high cost. 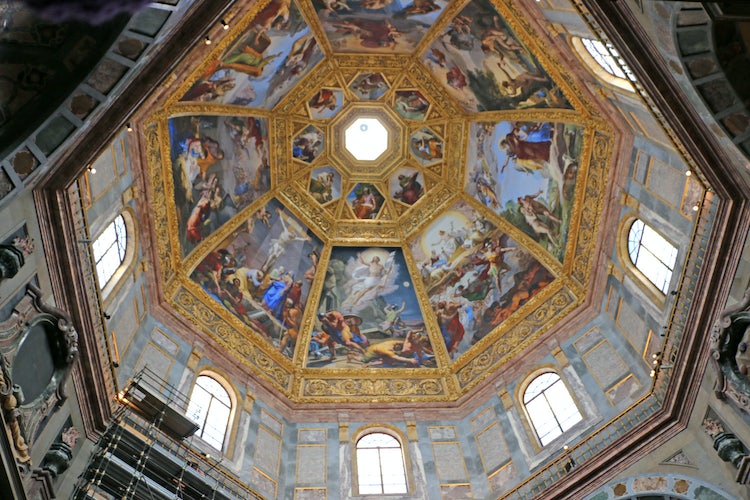 The cupola should originally have had an internal covering of lapis lazuli, but was left incomplete at the end of the Medici period and was frescoed in 1828 by Pietro Benvenuti with scenes from the Old and New Testaments at the command of the reigning house of Lorraine.

Piazza Madonna degli Aldobrandini 6, at the back of the Basilica of San Lorenzo

The Museum adheres to free entry for all visitors on the first Sunday of every month between October and March.