An Experience to be Lived in Person Step by Step

I adore the panoramic view: when I find myself in a city, I can’t resist the temptation to climb to the top of any tower, palazzo, terrace or anything that will give me the possibility to admire the urban skyline from above. Not that I am a modern day Spider Man and can climb my way up the walls! Actually most historic buildings are open to the public, and I take advantage of the stairs (and when possible the elevator) to enjoy the vista - even in my hometown of Florence.

So if you are moderately in shape and heights don’t make your head spin, then I say: Prepare yourself for some breath taking experiences (and I don’t mean just for the climb). Making your way to the top of Giotto’s Campanile (an unmistakable symbol of Florence), will certainly be one of these memorable moments. From the lofty heights of the bell tower of the Cathedral Santa Maria del Fiore, you will find several glimpses of a suggestive landscape. Be prepared to sweat just a bit, because there 414 steps to reach the very top! 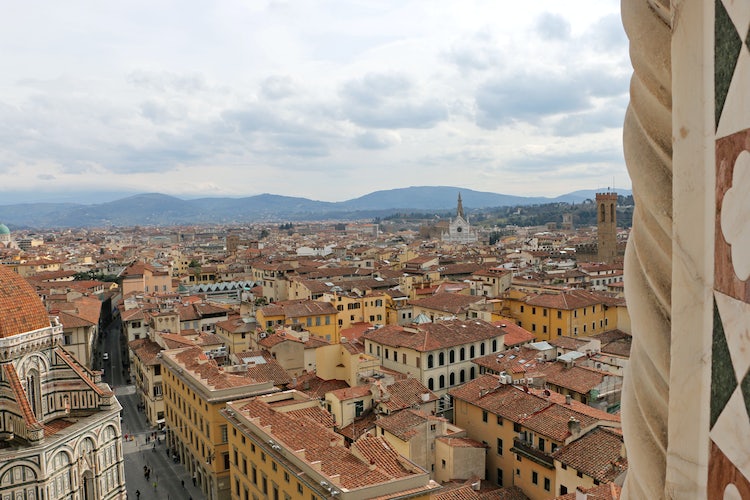 There are no elevators or other shortcuts that could help you out. In fact, the climb is not for those who suffer from heart problems, vertigo and claustrophobia.

For everyone else it is a workout, but if you set a calm pace and make use of the various terraces where you can stop, take photos, rest your legs and catch your breath.

At the top of the Tower a marvelous panoramic view of the city and the surrounding hills awaits you, not to mention a totally unique perspective from which you can admire the Cathedral and the Cupola of Brunelleschi. 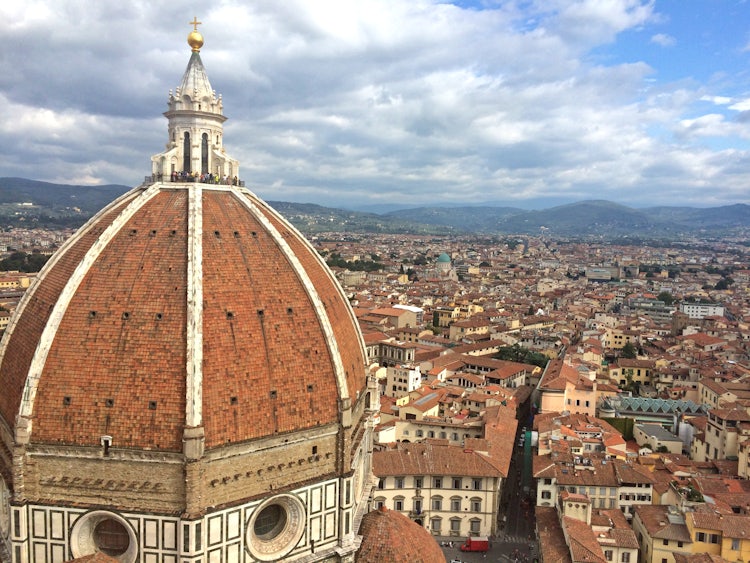 Are you still unsure if you want to visit the Bell Tower? Well, it’s good to know that the the ticket for the Museum for the Duomo gives you access to all of the monuments connected to the Duomo (Cathedral, Cupola, Baptistery, Bell Tower, Crypt and the Museum) and it is valid for 72 hours once you make your first entrance.

Book Online for the Bell Tower and the Cathedral

More than 6 Centuries of History & 84 Meters in Height

The Campanile is a splendid example of Florentine Gothic architecture from the 1300’s.

It was started in 1334 when Giotto, one of the principle artists and architects of the time, began to build the bell tower for the church, placing it next to the church. Even though the bell tower is named after Giotto, he actually only worked on it for three years before his death.

Another famous bell tower you can visit in Tuscany is:

The Leaning Tower of Pisa

Learn More about the Tower of Pisa.

After the death of Giotto, the next person to work on the tower was Andrea Pisano, who following the original design, finished the first two floors and then it was completed in 1359 by Francesco Talenti, after the Black Plague interrupted the work done by Andrea. The rooftop terrace and the highest point where one can reach was actually an idea of Talenti.

The square base is approximately 15 meters. The tower reaches 84,70 meters in height and stands next to the Duomo, with which it shares a similar facade made of red, white and green marble inlay.

The sculpted decorations on the outside of the tower are extremely rich in detail, in the form of a hexagon or a rhombus or diamond shape with bas relief carvings and life size statues. 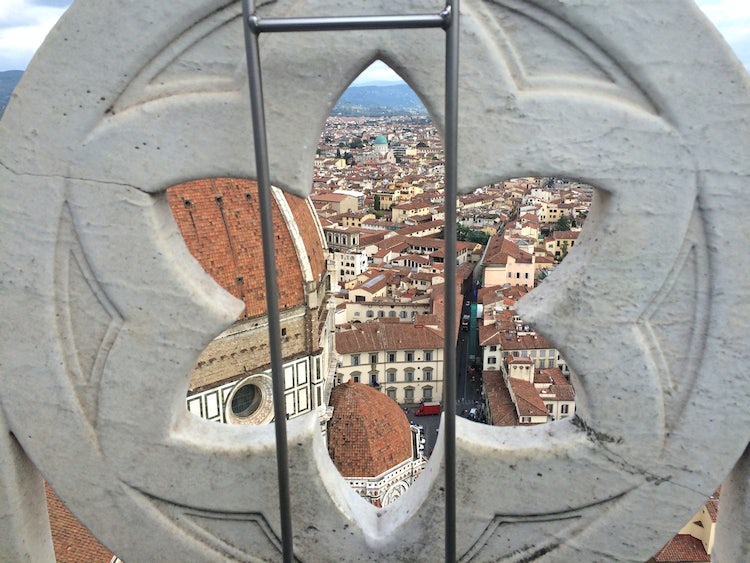 The lozenges shaped carvings represent the concept of Universal order and the story of Redemption, while the relief carvings narrate the “Creation of Man” and the influence of the Planets upon Man's life, Man’s virtues and the they reflect the Liberal Arts and the Sacraments. There are also 16 life size statutes placed in various niches which are the composite work of several artists from the 1300 and 1400’s, including Andrea Pisano and Donatello.

Over time, these masterpieces have been substituted by copies, but the originals are on view at the Museo dell’Opera del Duomo and we suggest that you don’t miss the opportunity to admire them up close! 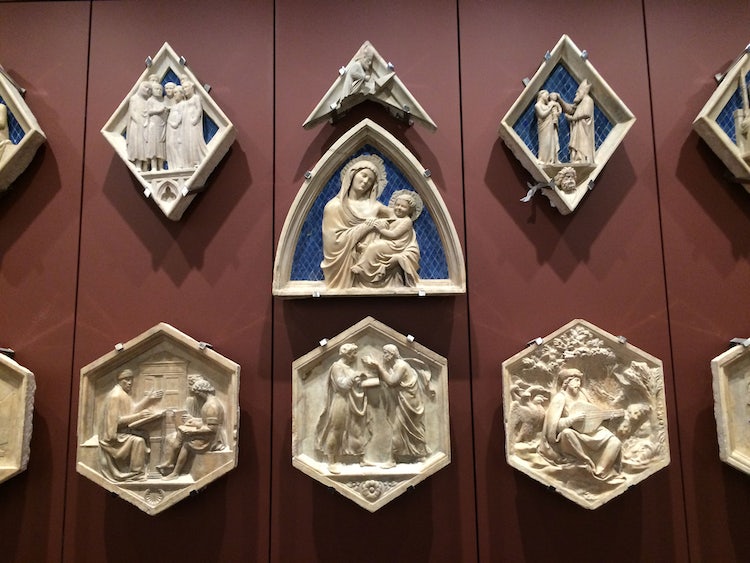 The Campanile has seven (7) bells. The largest of which is called Santa Reparata, in honor of the saint to which the original church was dedicated. The others are called: Misericordia, Apostolica (seen in the photo below), the Assunta, the Mater Dei, the Annunziata and the Immacolata, all these names are in some way tied to the Blessed Mother, and the dedication of the church named: Cattedrale di Santa Maria del Fiore. 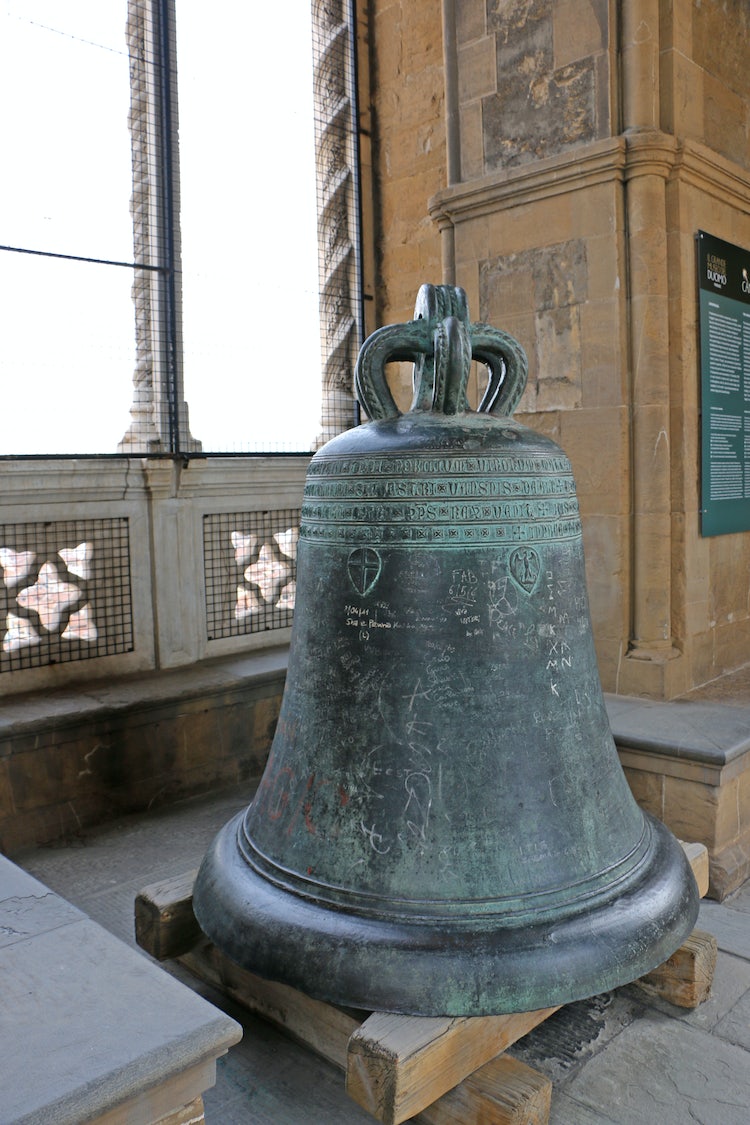 Do you love the panoramic views too? Then Discover the other views you can visit in Florence.

OPA Pass € 18 (one ticket for Baptistery of San Giovanni, Santa Reparata, Giotto's Bell Tower, Brunelleschi's Dome and the Museo dell'Opera del Duomo).
The ticket allows the holder to visit all the monuments within 72 hours of visiting the first one. Each monument may be visited only once with the ticket.
Reservations required for the climb on the Dome, recommended for climb up the Bell Tower and the Museum. Reservations are free and not mandatory for the last two.

The 414 steps at the bell tower is not advisable for persons with heart problems, vertigo and claustrophobia. No elevators.