When you think about the Baptistery of St. John in Florence it's easy to remember Dante's words in the Divine Comedy describing it as "my beautiful San Giovanni". Located in Piazza del Duomo, right in front of the Cathedral of Santa Maria del Fiore, it is one of the most important monuments in Florence.

The oldest religious site in all of Florence

Its origins are unknown although it is believed that it was built over the ruins of a Roman temple dedicated to Mars dating back to the 4th-5th century A.D. It was first described in 897 as a minor basilica. In 1128, it was consacrated as the Baptistery of Florence and as such is the oldest religious monument in Florence. Up until the end of the 19th century, all catholics in Florence were baptized within its doors. Today, young children can still be baptized here on the first Sunday of the month, but as they only have space and time for 4, you have to make the request with ample time.

The Baptistery, dedicated to Florence's patron saint, has an octagonal plan and an octagonal lantern with a cupola. Outside it is clad in geometrically patterned colored marble, white Carrara marble and green Prato marble that is typical of Florentine Romanesque architecture. 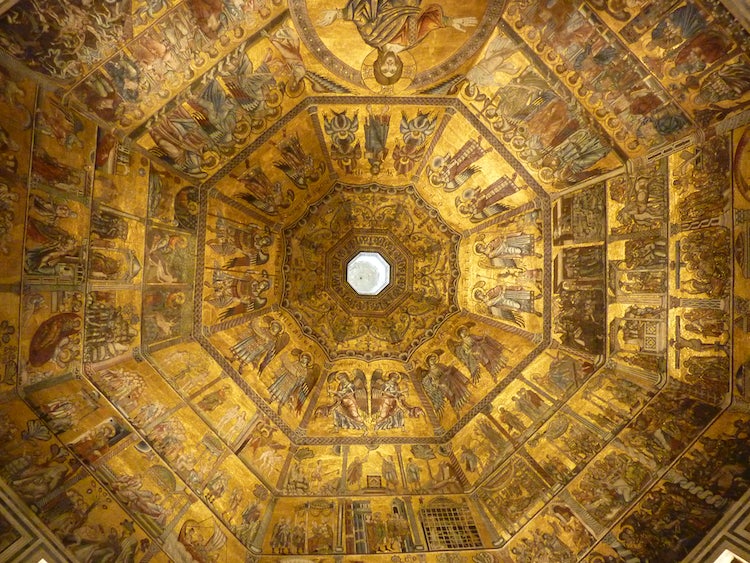 The doors of the Baptistery

On three of the four sides there are three large doors famous for their decorations. The most important door has always been considered the eastern doors, the ones that lead to the Duomo. All of the doors have been originally located on the Eastern side before being moved.

The oldest pair of doors are the bronze doors presently found on the South side of the baptistery. Made by Andrea Pisano around 1330, the doors consist of 28 quatrefoil panels depicting scenes from St. John's life. They have now been moved to the Museum Opera del Duomo for restoration (April 2016). It was possible to still see traces of gold on some of the panels, while the bright spots are oxidized bronze from the patina of millions of hands that have touched sections.

Today's Northern Doors are by Lorenzo Ghiberti (1403-1424) and depict Stories of the Life and Passion of Christ taken from the New Testament. The original doors are now on display in the Museum behind the Duomo, and copies are on display at the Baptistery. 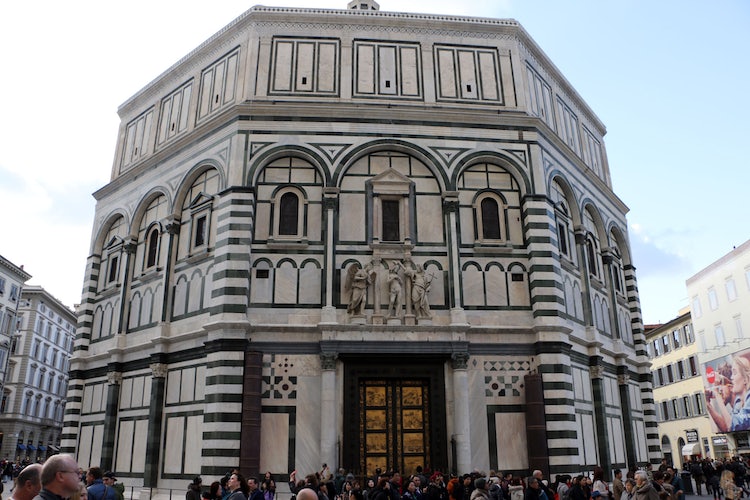 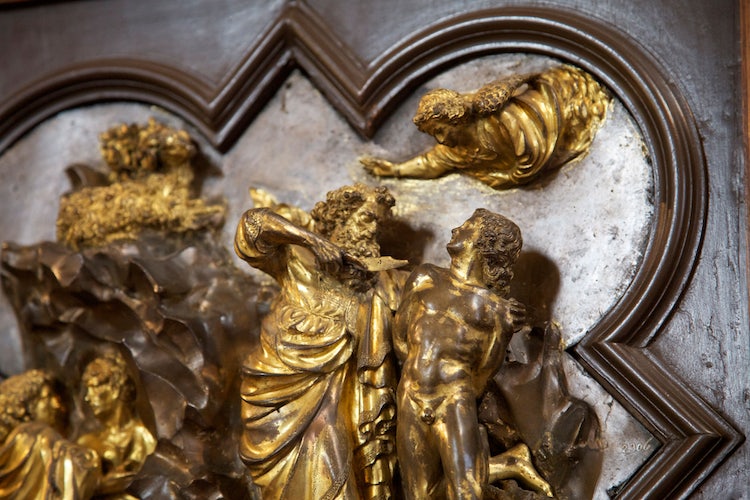 At the beginning of the 15th century, the Arte of Calimala (the Wool Merchants' Guild) announced a public competition to design the Baptistery's northern doors. Many famous artists participated in this competition including Ghiberti and Brunelleschi. Every artist had to design a quatrefoil panel depicting the Binding of Isaac using the lowest quantity of bronze. Ghiberti created a balanced and carefully detailed panel, thanks to his skills as a goldsmith.

Brunelleschi's work was completely different from both a technical and artistic point of view: Isaac writhes in pain and all the figures are so realistic they seem to come out of the panel. The new relationship between space and the human body already foreshadow Brunelleschi's achievement in perspective. His panel, however, was heavier than Ghiberti's and the bronze casting was not so perfect.

Ghiberti won the hearts of the judges (though he was already the favorite, since he had already created the doors that were facing the Duomo) and was awarded the commission to create the northern doors. The “cradle of the Renaissance” was not yet ready to “understand” Brunelleschi's revolution and preferred the traditional gothic aesthetics, still vibrant and lively at that time.

These last doors were so magnificent, it was quickly decided they were even better than the previous doors Ghiberti had designed and were to take place of honor, facing the Duomo. These golden Eastern Doors are most famously known as the Gates of Paradise after a famous quotation by Michelangelo. The panels depict scenes from the Old Testament. 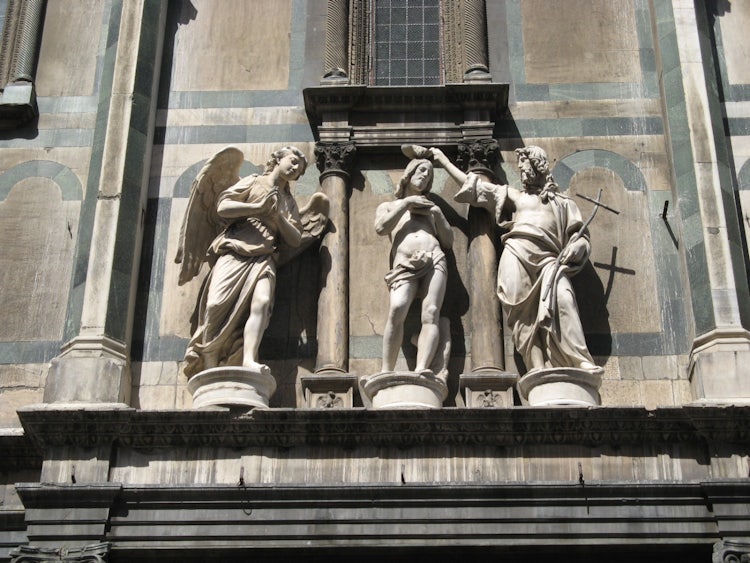 Above the doors stood three different groups of statues. Over the southern doors, the famous bronzes depicting the Beheading of St. John by Vincenzo Danti stood until they were restored in 2008 - the original is in the Museum Opera del Duomo. Above the northern doors stood the bronze group by Giovanni Francesco Rustici depicting St. John the Baptist Teaching between the Pharisee and the Levite modeled between 1504 and 1509. Above the Gates of Paradise stood the Baptism of Christ by Andrea Sansovino and an Angel by Innocenzo Spinazzi, added in 1792.

These are all beautiful statues that we highly recommend you view at the Opera del Duomo Musem where all of the originals are conserved; the statues found on the Baptistery today are copies but most of them unfortunately have not been yet replaced. 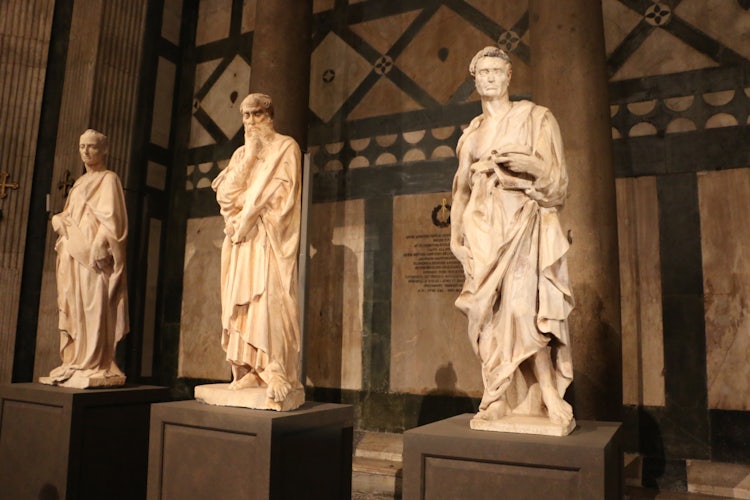 Its interior deserves a special visit to view the beautiful 13th century mosaics on the inside of the cupola, the spectacular mosaic marble pavement with geometrical patterns and oriental zodiac motifs. There is also the monumental tomb of Baladassare Cossa - Antipope John XXIII - created by Donatello and Michelozzo between 1422 and 1428.

The Gates of Paradise 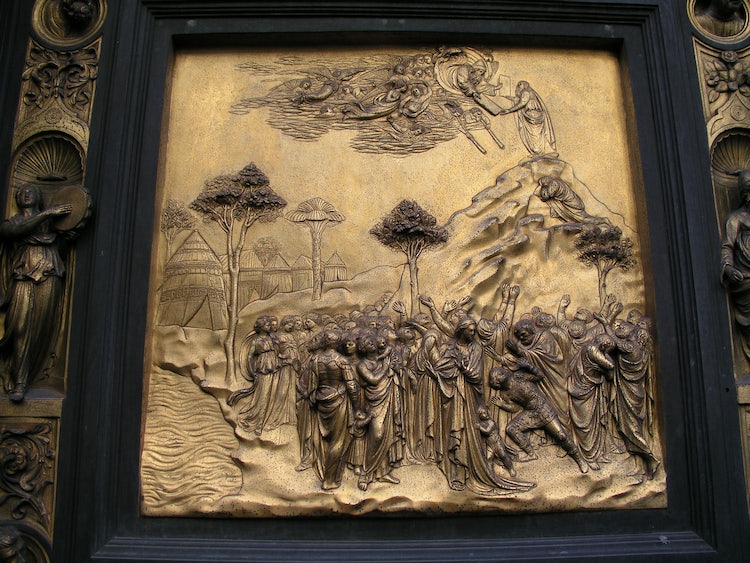 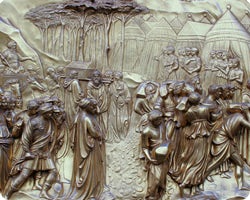 The Gates of Paradise received their name by Michelangelo who is believed to have exclaimed: "they are so beautiful that they would be perfect for the gates of paradise".

The doors consist of 10 rectangular panels, displayed in two lines. They depict scenes of the Old Testament from left to right and from top to bottom.

In each panel, Ghiberti described more than one scene so that there are over fifty scenes depicted.

All around the frame of the doors Ghiberti added 24 small bronze busts of famous Florentines, including his own self-portratit.

The original panels of the Gates of Paradise are now displayed at the Opera del Duomo Museum, the ones in situ are copies.

View more photos of the Baptistery »

Piazza San Giovanni, right in front of the cathedral

NEW PASSES starting April 2022 valid for 3 days.
The Baptistery is included in all 3 passes, which cost from €15-30, depending on whether you want to visit 3, 4 or all 5 monuments. More info on all the passes on our blog post.

Every day 9am - 7:45pm.
Hours are subject to change at any time, as this is a religious building and used for religious services

Please check the official website to double check hours for the day you want to visit: https://duomo.firenze.it/