OPA has over 700 years of serving Florence’s Cathedral

The Opera del Duomo, also known as the "OPA", is the the Cathedral Workshop or "works commission" and was founded by the Republic of Florence in 1296 to oversee the construction of the new Cathedral and its bell tower.

In 1436, the Cathedral was finally finished with the completion of Brunelleschi's dome and its consecration. 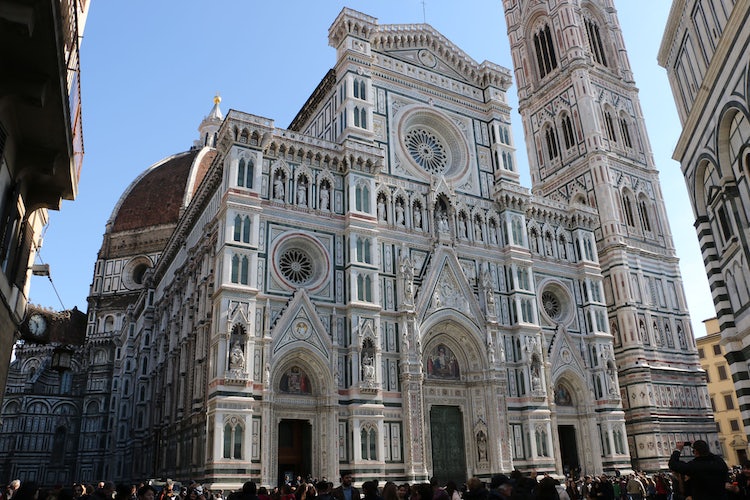 Since then, the main task for the Opera del Duomo has been to conserve these monuments - including the Baptistery of San Giovanni. In 1891, the Museum was founded to house the works of art which, through the course of the centuries, had been removed from the Duomo and the Baptistery.

The museum serves as a refuge from pollution for many of the outside sculptures of the cathedral.

The numbers give us just an “inkling” of what is really behind these monuments: 6,000 sq. mt of showroom space, over a 1000 years standing in Florence, more than 750 works of art, a little more than 720 years of service by the commission, set in 25 rooms with floor plan on 3 levels. The recent restructuring of the museum was organized so that the guest could live the past and the present of the cathedral exploring how it has changed over the years. 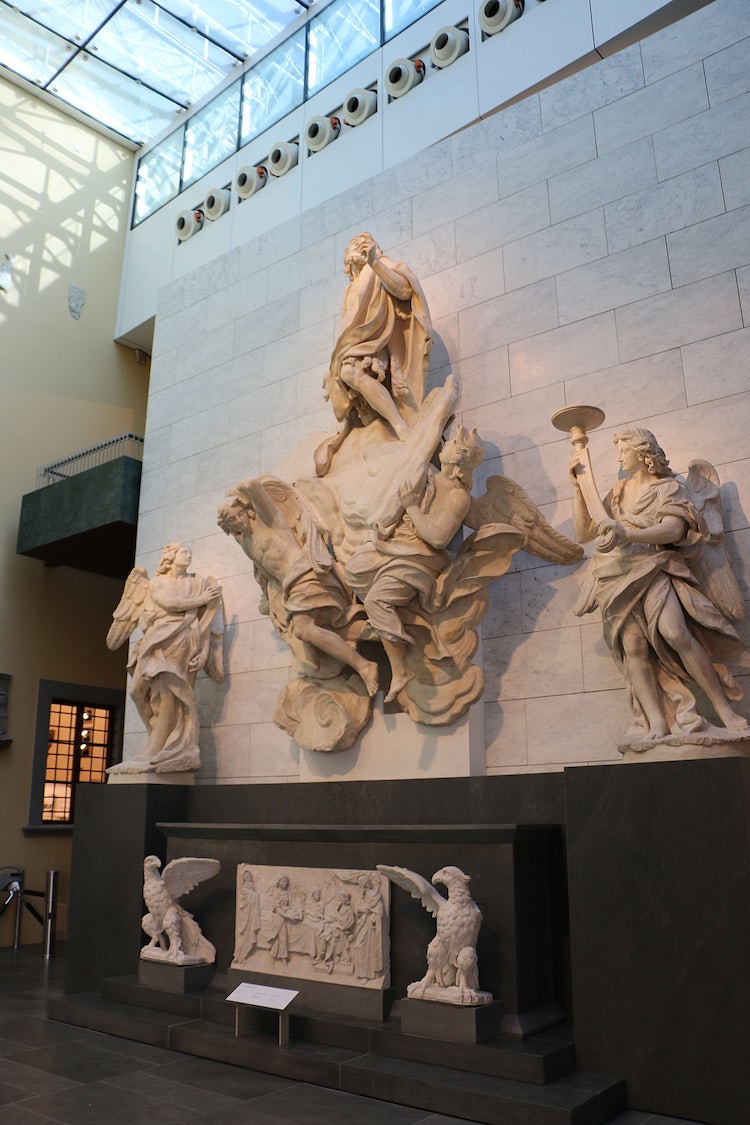 For the very first time, a spectacular new design hosts the museum's unique masterpieces in a setting reflecting the environment for which they were originally designed, creating a museum within a museum ...*

Even just the highlights of this museum could send you in an overdose of information, however this article tries to synthesis everything so you walk through the museum like a pro.

Check sidebar on the right for info on museum hours, the cost of the single ticket and more

The light and space are stunning.

You are immediately greeted by one of the colossal pieces of art that once graced the interior of the Baptistery. The main altar by Girolamo Ticciati (1676-1745) which was completed in 1732: Saint John in Glory and candle-bearing angels. It was taken out of the building so that the medieval altar could be restored to its original position. 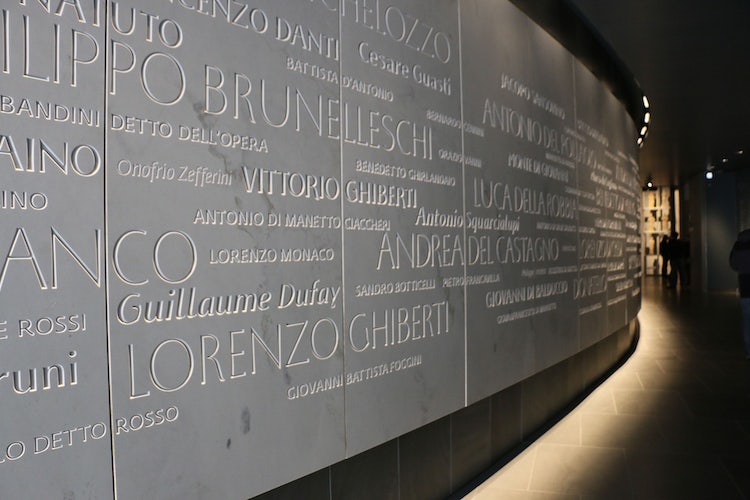 Perhaps the profound importance the Cathedral had on the people of Florence is found written on this wall, naming but a few of the 1000’s of people who contributed to its building, growth, expansion, decoration and preservation, including architects, artists, musicians, humanists, artisans and workmen. As you walk by you will years worth of names who have worked in the duomo of Florence.

A church that had an abundance of sculpture decorations was a sign of wealth and God’s blessings, and the Sculpture Gallery testifies to Florence’s growing importance in being able to keep pace with the other monumental churches. Especially the cathedrals being built throughout Europe which boast a wide collection of many Gothic sculptures. In this room you can also admire the rarely seen reverse side of the Baptistery doors. 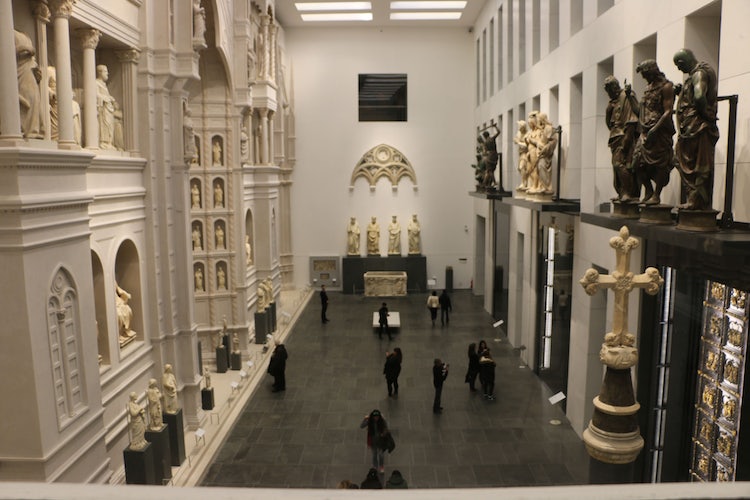 The name of this room comes from the literal recreation of the old cathedral facade and the baptistery. Coming out of the Sculpture Gallery you are faced with a life size model of the cathedrals first front face, aligning statues and artwork.

Following ancient tradition, Christians call the area between a baptistery and its related church a Paradiso (“Paradise”), evoking the joy of those who, after receiving baptism, cross that space to participate in the Eucharist for the first time.**

As you walk around the museum and the upper floors you will be able to admire from all angles the carvings and sculptures. The central courtyard also displays Ghiberti's original Gates of Paradise from the Baptistery just recently restored and cleaned: these were the original doors facing the Duomo and can be admired in their magnificent golden splendor up close.

This room is aptly named after the principle work of art which is in the center of the room, fully protected after its restoration by a sealed case, Donatello’s Penitent Saint Mary Magdalene, an amazing and thought-provoking wooden sculpture.

Attached to this room is the Cappella delle Reliquie which highlights (just) a portion of the churches collection of relics consisting of more than six hundred pieces of various types. These objects where an important part of the devotional life of the church, especially in the early stages of its growth and their coffers were often elaborate and ornate. 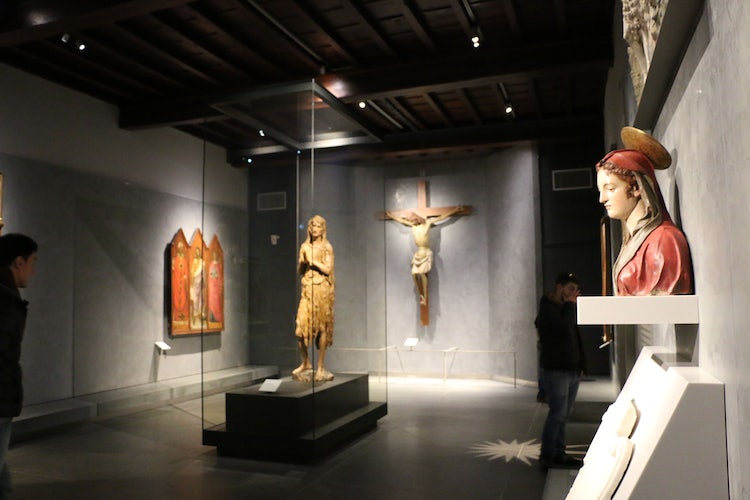 In a room of quiet isolation is Michelangelo's Pietà (begun around 1550) which once stood in the Duomo. It is widely believed that he intended it for his own tomb; the hooded figure of Nicodemus is often interpreted as a self-portrait. The damage to Christ's left leg and arm is believed to have been inflicted by Michelangelo himself in frustration at his failing skills. 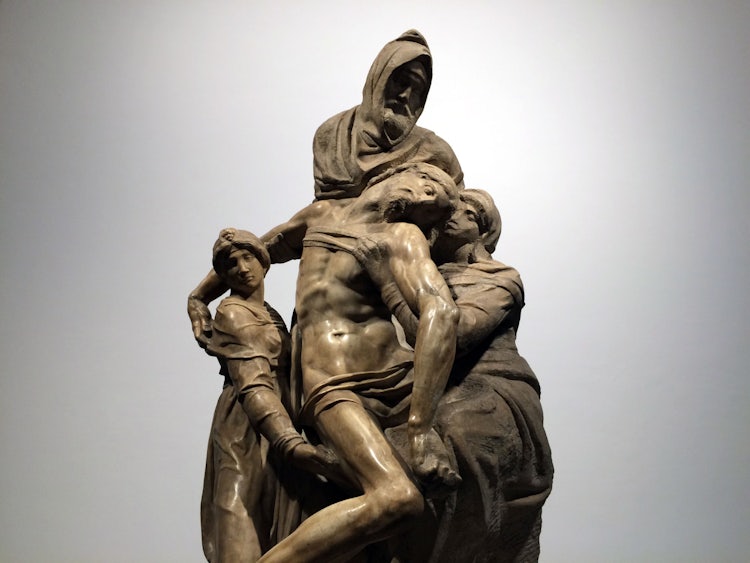 Moving to the First Floor

The expert skill of a sculptor was to carve a statue that when seen from the ground, would appear “normal”. Many times the gazer can not even distinguish the adjustments & distortions the artist made so that the hand looked proportionate to the nose and to the foot - both seen at different heights and distances. The various windows on the first and second floors allows the viewer to examine these masterpieces looking for their perfections and imperfections.

This room holds some of the artwork from the bell tower, once again it is evident that sculpture was the means of communication with the sixteen larger-than-life statues and fifty-four reliefs.

The reliefs are shown in their original order, beginning on west front of the Bell Tower and moving to the south, the east, and finally the north. The hexagonal scenes of professional activities are arranged beneath the diamond-shaped ones that illustrate the “systems” structuring human life.*** 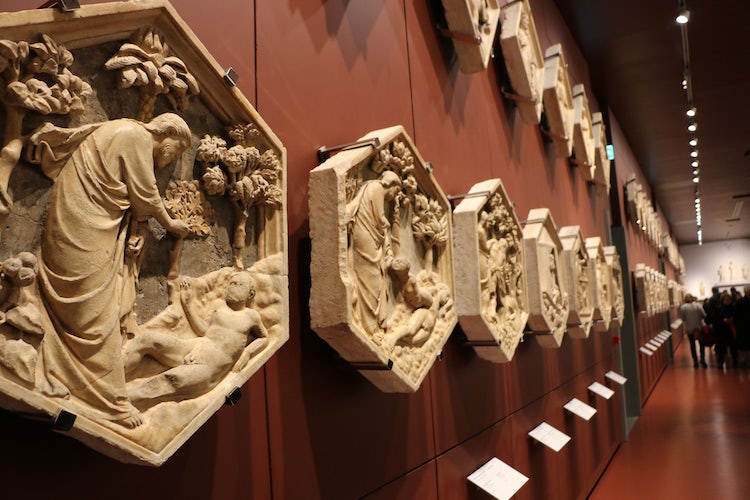 Perhaps one of the more fascinating rooms in the museum centers on the architectural masterpiece of Brunelleschi, the Cupola. This room brings together the construction with a brief film, the tools “invented” for the purpose of reaching these once dizzying heights, designs of the decorations & windows that grace the interior, even three large tree trunks that are a subtle reminder of where the wooden beams came from to build this (almost) impossible dream: The Casentino Forests.

Here you will find side by side two choir lofts that once stood in the Duomo: one sculpted by Luca della Robbia (1431-38), the other by Donatello (1433-39). This is a valuable opportunity to compare two of the great artists of the Renaissance: della Robbia's infants are smooth, their movements lyrical; Donatello's convey a more immediate vigor. 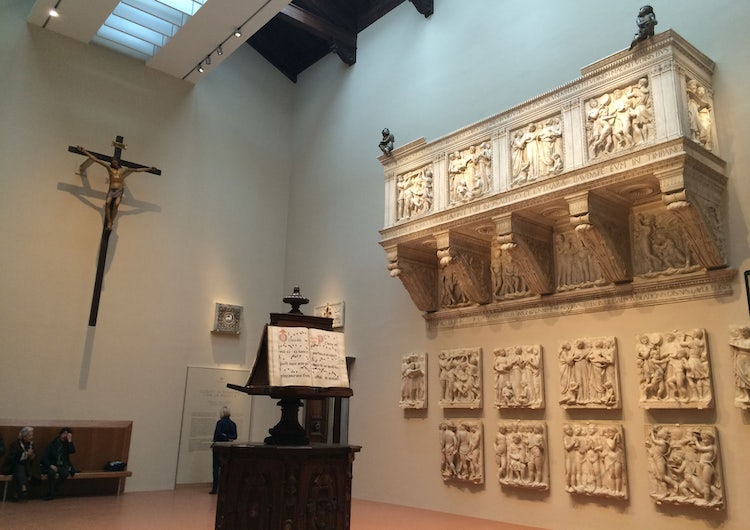 This room is dedicated to Baccio Bandinelli, who was commissioned by Cosimo I de’Medici for his artistic skill with marble. He started in 1547 eighty-six reliefs, together with his assistants, to be used to decorate the choir enclosure. This room puts on display 24 of these panels, as well as a selection of vestments from the 16th, 17th and 18th centuries.

Climbing to the Second Floor

There are several sets of stairs throughout the first floor which will take you to the next level, I must admit I had the faint sensation that they changed direction (like the magical steps in Harry Potter) and frequently led me to a dead end, but just in case you need it there is an elevator at the end of the Galleria della Cupola and another to the left of the stairs after either the Salone del Paradiso or Galleria del Campanile.

Why are they Copies?

The originals can be seen with the Rooftop terrace tour. Where the guide revealed the secret behind this mystery.

The original statues were so large they couldn’t get them out of the Duomo without damaging them or the Duomo!

Just as the name suggests, this gallery houses the models submitted for the new façade. There are seven large wood models illustrating proposals for a Renaissance façade in place of the medieval one which was demolished in 1587. In addition, there are two paintings for the wedding of Grand Duke Ferdinand I to the French princess Christine of Lorraine, along with copies of three of the colossal statues that adorned the Duomo on that occasion. 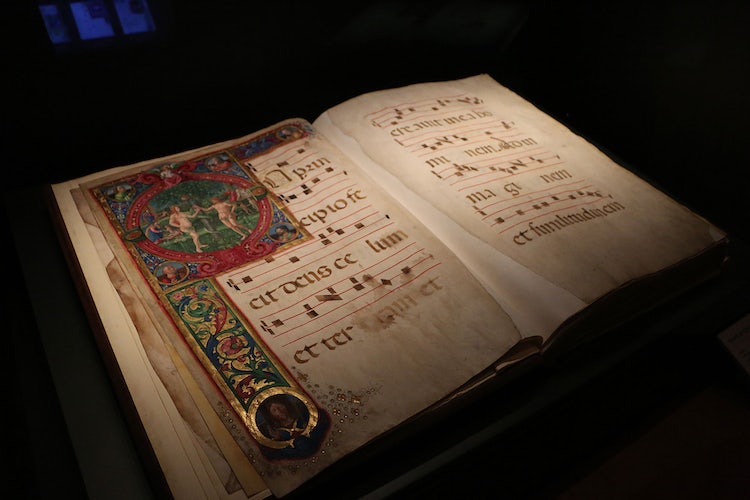 One of my favorite areas include the room with a skylight facing the cupola and the outdoor terrace, once again facing the cupola. These little treats bring the dome even closer for your inspection, where you can appreciate some of the smaller details in its construction...or even just the miracle of it. 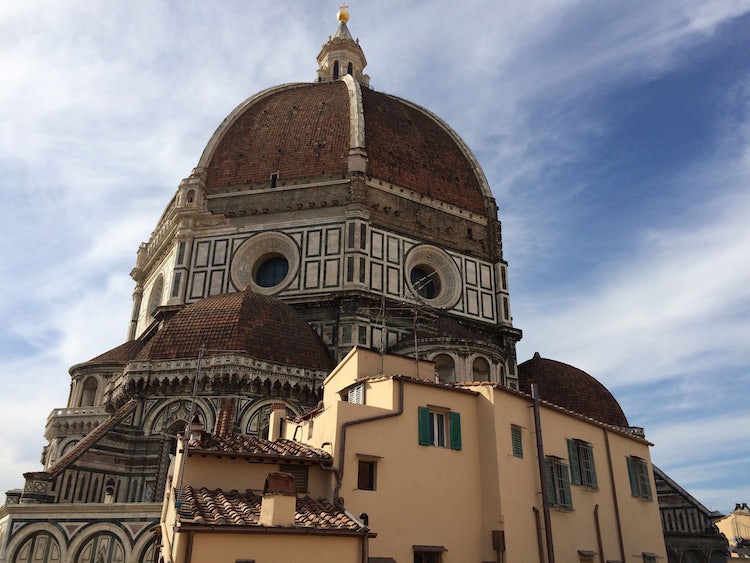 The Last of the Recent Changes

On the ground floor you will find a fully furnished book shop with many titles and ideas for adults and children to continue your education on the details, artists and designs of the Duomo. There is a small cafe, with the same luminous decor overlooking the back side of the cathedral, and its fabulous colored marble covering. 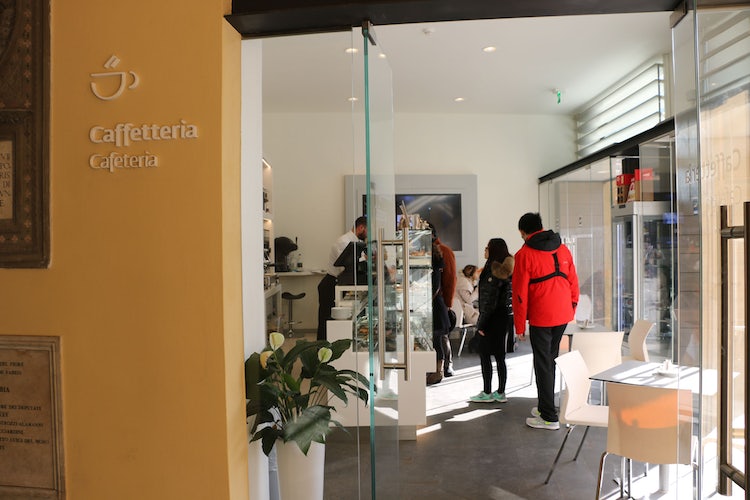 The museum organizes new events and tours constantly, highlighting new aspects, discoveries or even a classical review of what we already know. Check out guided tours that include the Duomo and Opera del Duomo museum.

Another great selling point for the Museum is that there is a single ticket for entrance into all monuments connected to the Duomo (see side bar). The ticket allows the holder to visit all the monuments within 72 hours of visiting the first one. Each monument may be visited only once with the ticket. You can also carve out just the right amount of time, because reservations are required for the climb on the Dome and recommended for the Bell Tower and Museum. Extra nice to know, the service is free and not mandatory!

When you consider the great wealth of information stuffed into this building, it is overwhelming. It is intriguing and it is truly a valuable lesson in the spirit and history of Florence, its politics and its artists.

NEW PASSES starting April 2022 valid for 3 days.
The museum is included in all 3 passes, which vary in cost from €15-30, depending on whether you want to visit 3, 4 or all 5 monuments.

More info on all the passes on our blog post.

Every day 9am-7.45pm. Closed every first Tuesday of the month.

Please check the official website to double check hours and buy tickets ahead of time: https://duomo.firenze.it/