Exploring the glory of masterpieces from the past

Like a very precious treasure chest, the Uffizi Gallery will grant itself to visitors just a little bit at a time: from the initial uncertainty on where to get tickets, getting through lines to get inside and at the metal detector, then taking two flights of Renaissance-era stairs before you arrive at the actual entrance to the museum. Finally, the Gallery unveils its stunning frescoed ceilings and the start of its collections.

The museum is organized as a long labyrinth of rooms with amazing works of art displayed roughly in chronological order along a U-shaped Renaissance building which was never created to be a  museum. Cosimo de’ Medici had entrusted his favorite architect Giorgio Vasari to create a grandiose building right next to Palazzo Vecchio, the seat of power, to host the magistrates, the seats of the Florentine Guilds, a vast theatre and judiciary offices (hence the name “Uffizi” which means offices in Italian). 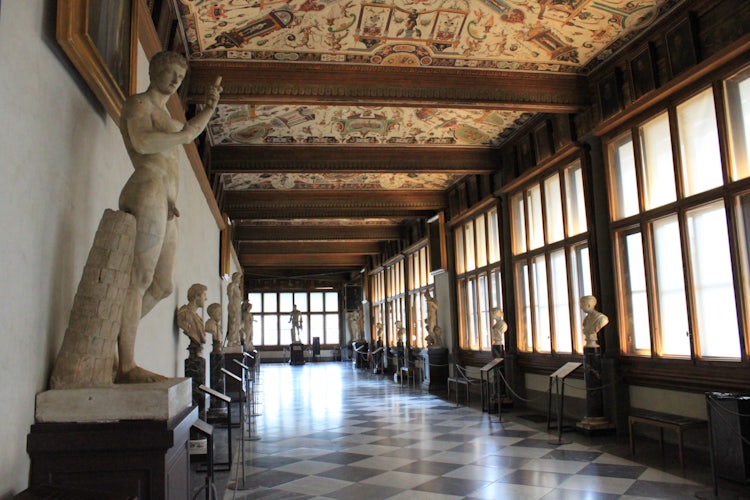 Check the box on the right → for opening hours and admission cost to better plan your visit to the Uffizi!

This is so you understand that these spaces were not "born" as a museum nor intended to welcome up to an average of 10.000 people a day, which they do now. The halls of the top floor of the Uffizi at first were only accessible to the Grand Ducal family, servants and only a few select guests where the family started to place the many pieces of their personal private collections. Guests were welcomed on the top floor to admire the grandiose collection of Roman sculptures the Medici loved to collect.

The art-fond Medici family also collected manuscripts, gems, coins and cameos over the centuries. With Francesco I, there is the first private room dedicated to items that were “any kind of wonder” which they thought were interesting objects.

As of March 1, 2018 you can visit the National Archaeological museum (MAF) for free when you buy a ticket for the Uffizi!

Buontalenti created for Francesco I an octagonal shaped Tribune to host his favorite works of art and jewels: the Tribune is considered the most ancient and precious heart of the Uffizi, still maintaining its original shape from its construction in 1584.

The concept of “museum” will be developed much later by Peter Leopold of the Lorraines in 1769, when he opens the Uffizi Gallery and its treasures to the public. He would have never imagined that it would become one of the most frequented museums in the world. Serious art lovers should visit the Uffizi at least twice to see all of it! 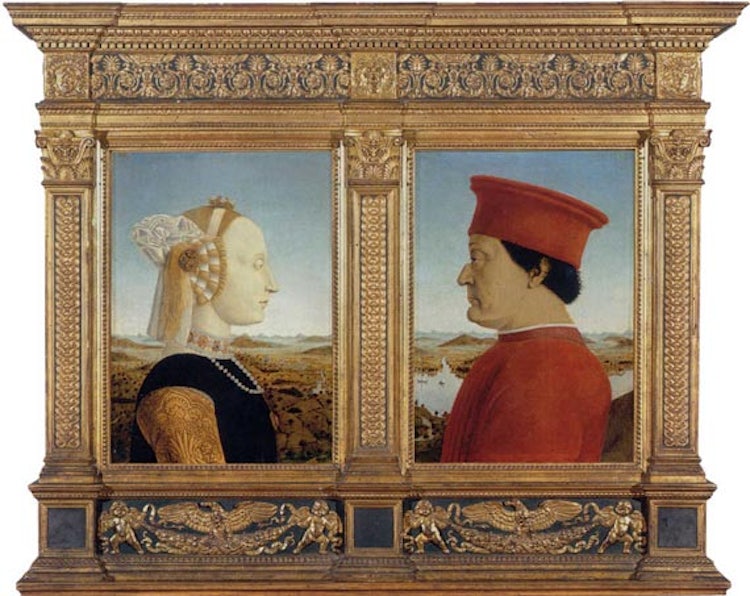 Portraits of the Dukes of Urbino by Piero della Francesca

A walk through the Collections

Absolute Must See's at the Uffizi

Start from the Gothic painters which include Giotto and Cimabue, who left us some of the largest altarpieces. The magic of the first hall (actually Hall 3) is the sensation of being welcomed inside an ancient church, with low lighting reminding us of candle lights. Enjoy a walk through the Hall of Early Renaissance painters (Hall 8 and 9) like Paolo Uccello and Masaccio and a special stop in front of the unmistakable Portraits of the Dukes of Urbino, by Piero della Francesca. The profile of Federico da Montefeltro is one of the most impressive portraits of the Renaissance.

A few steps from the diptych you’ll find the largest hall of the museum, housing the most stunning and breathtaking paintings by Sandro Botticelli (Halls 10-14). Stop for a few minutes to simply admire in silence the large panel of the Allegory of Spring and the canvas of the Birth of Venus. The newly reopened and renovated halls now have a double ceiling with softer but better lighting to really enjoy these masterpieces. Enjoy the many other Botticelli works of art in these rooms. 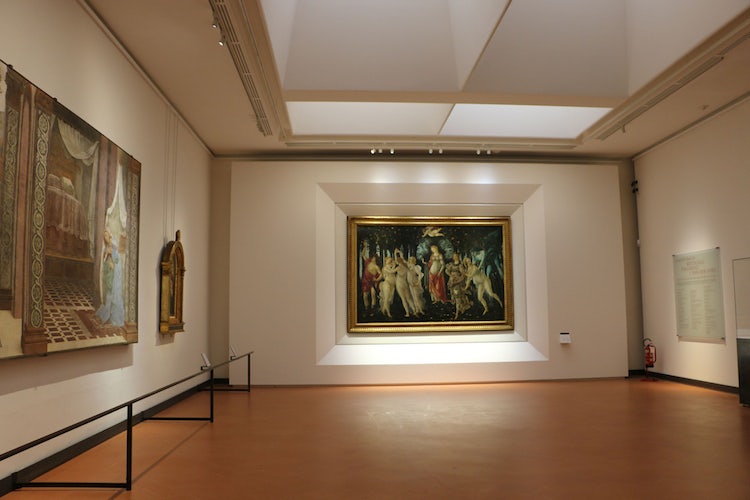 The Tondo Doni by Michelangelo and Raphael’s portraits (now in halls 35 and 66), and Leonardo da Vinci's one and only completed panel painting, The Annunciation, are considered the height of Renaissance works, described by Vasari as “The School of the World” for any painter. 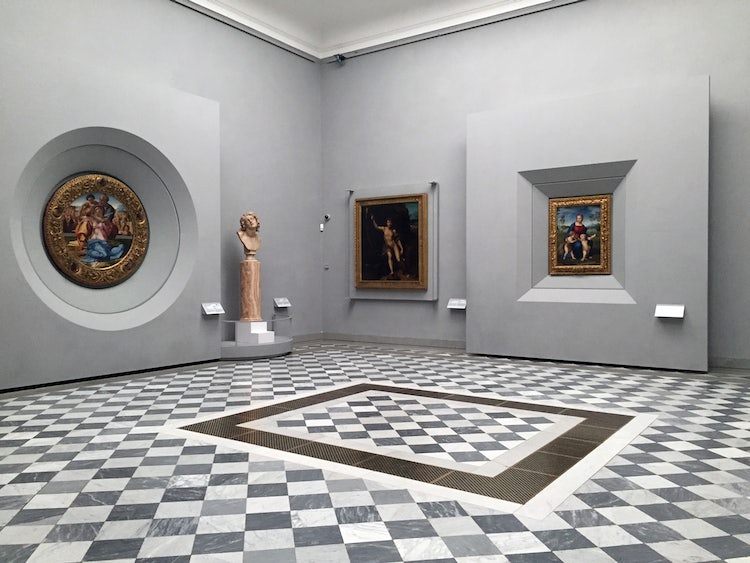 From the far end of the corridors, enjoy the great view to see San Miniato Church and the Bardini Gardens across the Arno and, last but not least, the Ponte Vecchio over the Arno river. By this time you will have just seen one fourth of the museum… you still have three long corridors to walk along before the book shop and exit!

Touring the Uffizi is surely one of the highlights of visiting Florence. The best part of the day to visit is doubtless in the afternoon; better after 4pm once large groups have left the museum. Take your time, enjoy glancing at the portraits, the views over the hills, the unforgettable priviledge of walking through “the Medici offices” with patience and respect for timeless treasures. 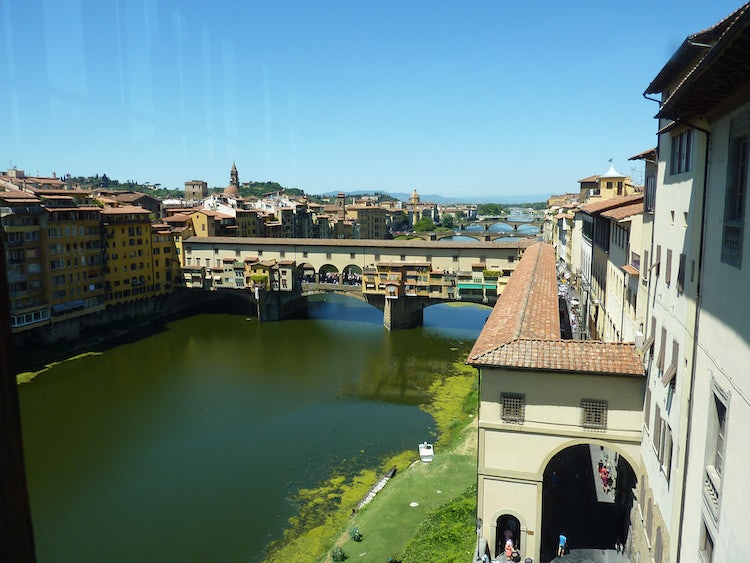 For a special visit to the Uffizi, make sure to visit with a guide! The personal tour will take you to the main masterpieces at the Uffizi so you won't miss any of them, check out our review of this guided tour we did.

The Uffizi Gallery museum is among the most visited in Italy, with over 1.5 million visitors each year, so long lines are inevitable. Weekends, Tuesdays and mornings are the busiest times. Despite the slightly higher cost of entrance (extra booking fees), it is better to buy your Uffizi tickets ahead of time to skip the long line and spend more time in the museum. 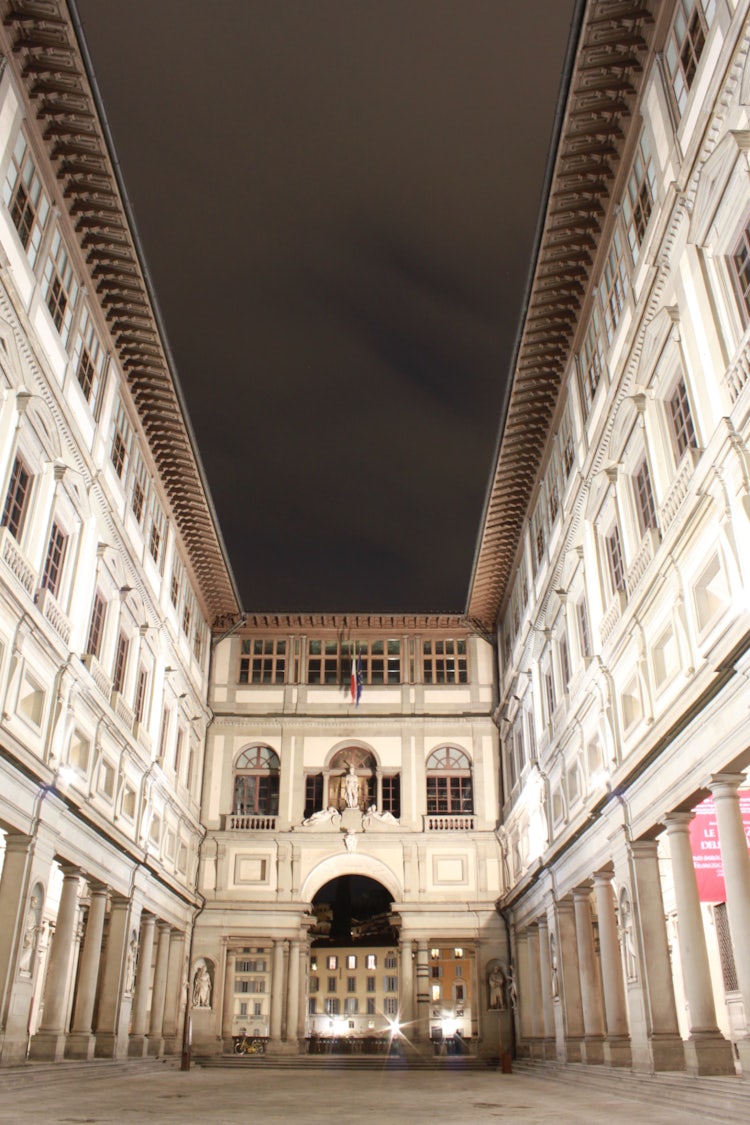 View our photo gallery dedicated to the Uffizi! » 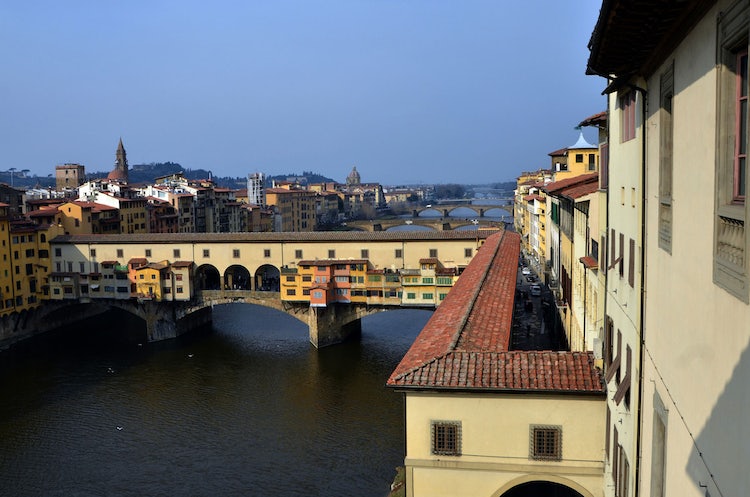 Visitors to the Uffizi may also visit the famous Vasari Corridor linking Palazzo Vecchio and the Uffizi to the Pitti Palace on the other side of the Arno. Over 1km long, the passage way was commissioned in 1565 by Cosimo I to celebrate the marriage of his son Francesco to Joanna of Austria and was completed in only 6 months. The private corridor enabled the Medici to move freely between the seat of government and their private residence without having an escort and without walking among the commoners on the street. Apart from the delightful views of the city through the corridor's circular windows, its entire length contains a selection of 17th and 18th century paintings, including a unique self-portrait collection of painters.

A visit to the corridor is NOT POSSIBLE AT THIS TIME as it is closed for renovations. Planned reopening is for 2021, read our blog post for the latest updates.

Read the full article on the Vasari Corridor »

To these prices, add € 4 if you pre-book tickets by phone or online, plus any online commissions which vary depending on vendor (there are many official vendors of tickets)

Annual Pass: Visit the Uffizi Gallery as many times as you want for a year from purchase! Cost is € 50 (valid 365 days after first use), read this post for more info. With your Uffizi ticket, you have free entrance to the MAF museum, read more details.

Every first Sunday of the month between October and March, entrance is free for everyone! You CANNOT pre-book tickets for this day. There are other free days during the year, check out our blog post for the 2019 dates here.

Closed on Mondays, January 1, May 1 and December 25