As you walk through the spacious and contemporary-styled halls of MAF, the National Archaeological Museum in Florence, you would hardly recognize that it is one of the oldest museums in Italy.

Not only, but this collection of artifacts, art and history is responsible for a European phenomenon: “the birth of museums as state institutions linked to the formation of modern nations.”

The original museum, which was housed in the same area as the "Cenacolo di Foligno" in via Faenza, was inaugurated by King Vittorio Emanuele II on March 12, 1871.

The collection is composed of the original Etruscan Museum, several Greek and Roman antiquities from the Medici and Lorena collections and, at the core of the collection, is the Egyptian Museum a gathering of artifacts second only to the collection in Turin, Italy. 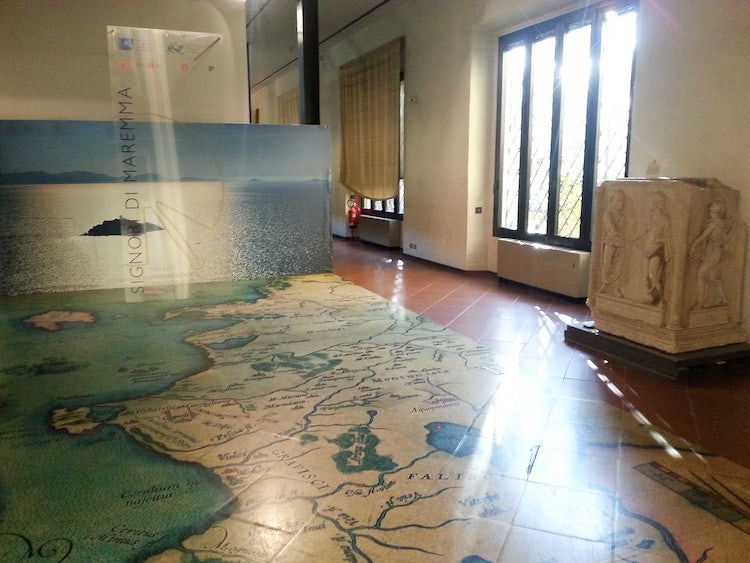 As of March 1, 2018 you can see this museum for free when you buy a ticket for the Uffizi! Check out our blog post

The museum also has many exhibits of other cultures such as the Paleoveneti, Villanoviani, Anatolia, High Middle Ages and Renaissance. However, there are a few sections which are the highlights of the museum which truly merit your undivided attention. If you go through each section attentively, you will find that in an hour and a half - two hours, you will be able to see it all.

The People who Populated the Maremma

Recently restored, in the year 2000, this area of the museum has displays in both English and Italian as well as several exhibits that bring the story of the Etruscans to life, exceptional for the young visitors just learning about this epoch. The Etruscans were of particular interest to the Medici family, and the Grand Duke Cosimo I was responsible for a major part of the existing collection.

There are several pieces that highlight the incredible workmanship and artistic skill of this population but perhaps the most famous is the Chimera - a find from 1533 of a bronze fire-breathing female monster with a lion's head, a goat's body, and a serpent's tail. This piece has been duplicated so that the visually impaired and curious hands can explore the minute details on the original statue. The copy is located at the entrance of the museum. 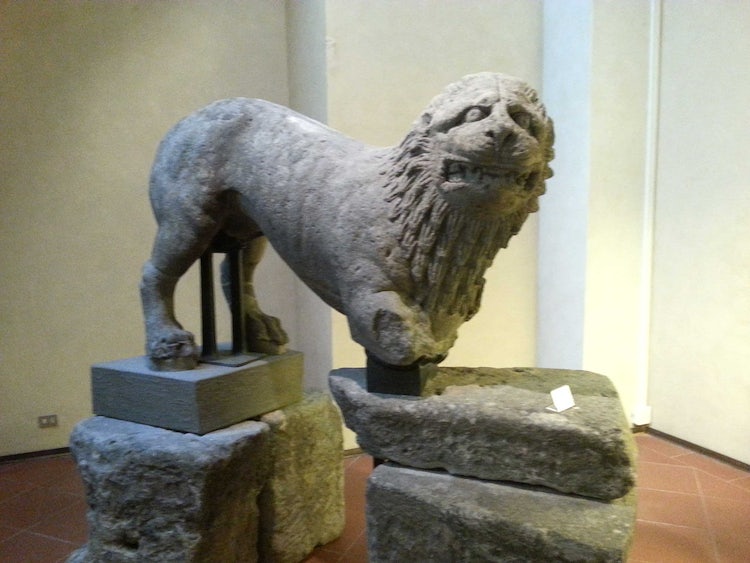 Another piece which is truly mesmerizing is the Orator (L'Arringatore), a bronze sculpture which has been classified as a Romano-Etruscan work from the late second century or early first century BC. You can feel his passion as he raises his right arm and speaks to the public.

This part is organized on two floors, the modern decor uses the ample natural light to illuminate many of the exhibitions which have been created in a way to tell the story of this mostly unknown civilization.

The museum, since its reorganization, has put quite a bit of effort in making it enjoyable and educational for all ages and all levels of interest. One of these areas is the garden of the Museum, called "ameno"; it is one of the historic gardens of the Florentine Medici palaces. Just think, that as far back as 1902 the garden already took on a didactic slant. 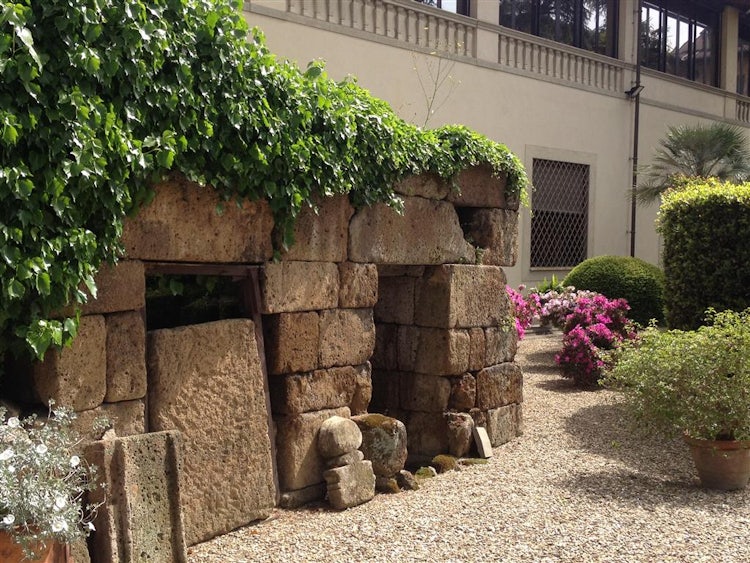 However, today not only does it attract attention from the other side of the ornamental wrought iron gate for its various seasons blossoms (magnolia, roses and many other colors) but also for its “garden decor” - which in a word is “unique”. It includes a range of Etruscan tumulus tombs and simple sarcophagi in what can be described as a kind of en-plein-air museum.

Some tombs were literally dismantled in the necropolis of origin (in places often difficult to reach and at the time afflicted by malaria) and reassembled in Florence; others were rebuilt ex-novo, such as the Inghirami tomb of Volterra.

The garden is visible from the first floor gallery over the Etruscan exhibit and is open to the public (with an extra entrance fee) only on Saturday mornings. Every hour starting at 9:30 am till 12:30 pm there is a guided tour of the garden area and its historic treasures.

This area of the museum, furnished with good lighting and spacious show rooms, is home to several beautiful artifacts from the Roman period. These discoveries are both small and large detailing moments of the life in Roman times. The statue Idolino, or Idolino of Pesaro was unearthed in 1530 in a Roman villa in Pesaro and came into the possession of Francesco Maria I della Rovere, the Duke of Urbino. Though it would eventually call Florence it’s home, it moved around for quite a years before returning to the MAF museum. 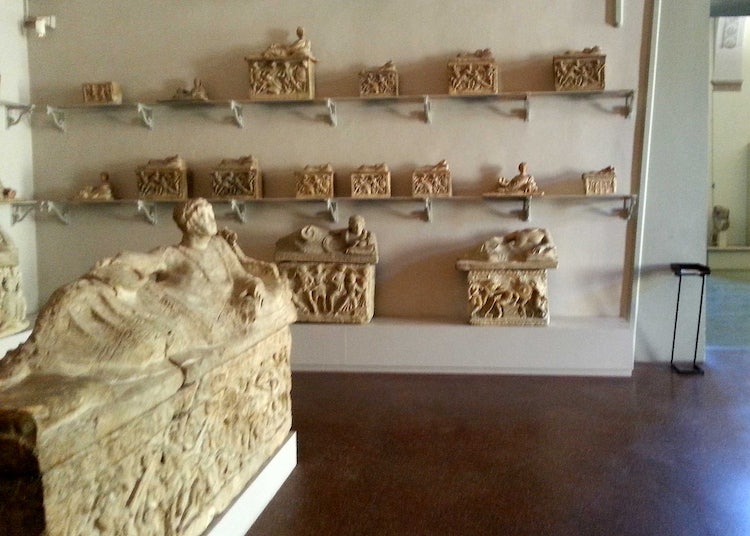 The many Etruscan tombs in the area often were filled with reminders of cultural and mercantile exchange with Greece, especially in the period between the 4th century BC. This section holds many of these beautiful Greek artifacts to admire.

As you stroll through the halls with the Greek collection, you will admire an athlete's torso from the 5th century BC carved from stone with fine details. Particularly fascinating is the large Hellenistic horse's head, also known as the Medici Riccardi head since it was first displayed at the Medici Riccardi Palace.

It is said that this statue inspired Donatello and Verrocchio in two famous equestrian monuments in Padua & Venice.

The most important of the vases is a large black figure krater, a large vase in Ancient Greece believed to be used for watering down wine, from c. 570 BC. The design is fascinating and, if one looks carefully, you will find both the signature of the potter, Ergotimos, and the painter, Kleitias. This krater is named the "François vase" after the archaeologist who found it in 1844. 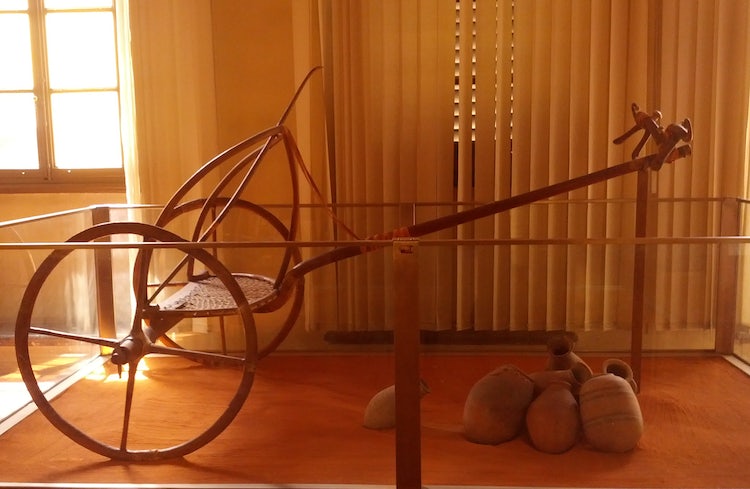 The Egyptian Museum at MAF consists one of the largest collection of Egyptian artifacts in Italy, second only to that of the Museo Egizio in Turin. The first piece you will encounter, deep within the museum, is an authentic Egyptian war chariot made from bone and wood - and it's almost completely intact, together with a bow and arrow (2017-presently under restoration).

The collection comprises material that extends from the pre-historical era right through to the Coptic Age. There are remarkable collections of stele, mummies, ushabti, amulets and bronze statuettes of several eras. Today, the Museum exhibits over 14,000 pieces displayed in nine rooms and two warehouses. The exhibition rooms have been totally renewed. The old layout has now been replaced with a new one that arranges, when possible, everything according to chronological and topographic order. 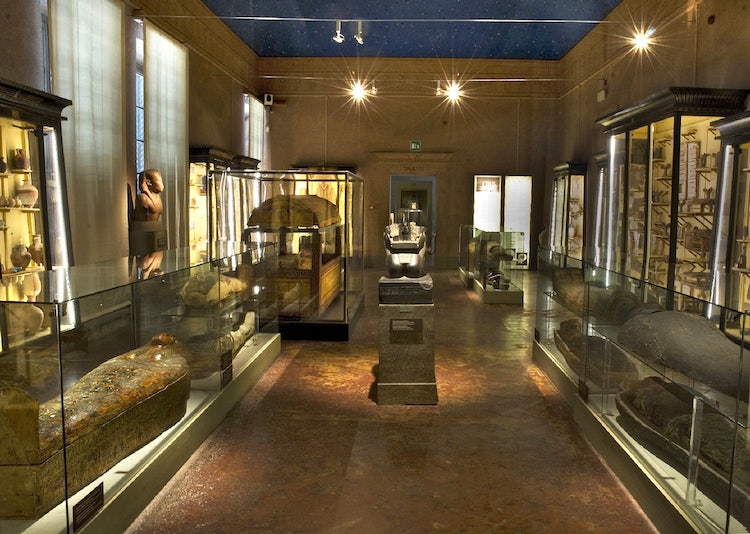 In a city that is well known for its Renaissance artwork and Medieval architecture, it is hard to imagine that there was so much other history that surrounded the area in the earliest times, considering Florence was then born as a roman settlement. This museum ties together the past of Florence, Tuscany and reaches beyond to display some of the marvels of ancient Egypt. It is especially suited for families with kids on a rainy day when you need something to capture their imagination. Enjoy exploring into the past at Florence's archeological museum!