The Church of San Marco

The 18th century facade of the San Marco church dominates the all but tranquil square; buses, students, tourists and locals cross this piazza in droves from early morning until late at night. However, all that hustle outside the doors of the church does not infiltrate the tranquility nor besmirch the beauty behind those large wooden doors. 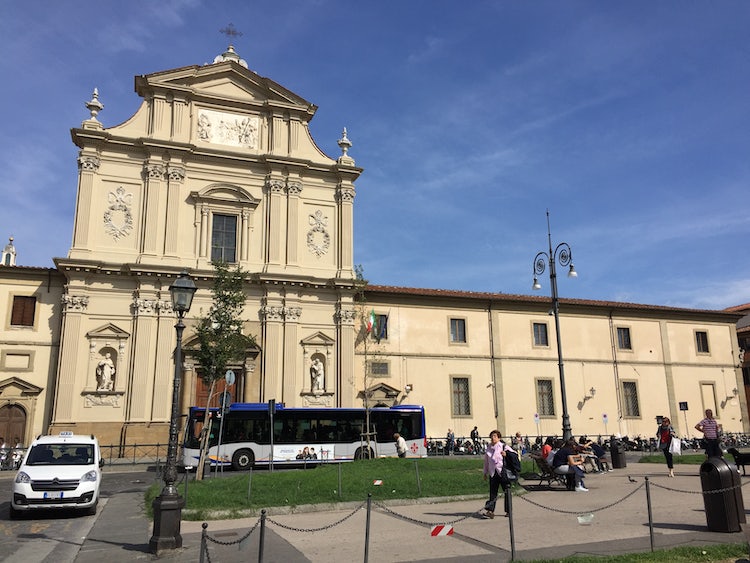 San Marco was founded in 1267 by the Silverstrine monks, an Order of the Benedictine Reformed. Over the following 150 years, Florentines became disillusioned with the monks's less than proper religious conduct and, in 1418, pleaded with the Pope to remove the monks from the monastery (which he did). It was only until 1437 that with Cosimo il Vecchio's intervention and persuasion that the Pope finally sent an invitation to the Dominican monks of Fiesole to move into the vacated convent.

The new inhabitants found the structure in deplorable conditions partly because the disgruntled Silverstrine monks striped the church and convent of all its worldly goods, and in part, due to a fire years earlier which destroyed sections of the structure. This was the first of many restorations and “redecorating” the church was to undergo over the coming years.

The first to work on the structure was Michelozzo, who was not only Cosimo’s favorite architect but also an artist faithful to the Renaissance innovations created by Brunelleschi. His work consisted of structural interventions: the chapel was extended with the addition of a new apse and a redistribution of the interior spaces, while in the aisle walls were constructed which would eventually support two altars (one for Saint Thomas Aquinas, and another for the Holy Cross.) 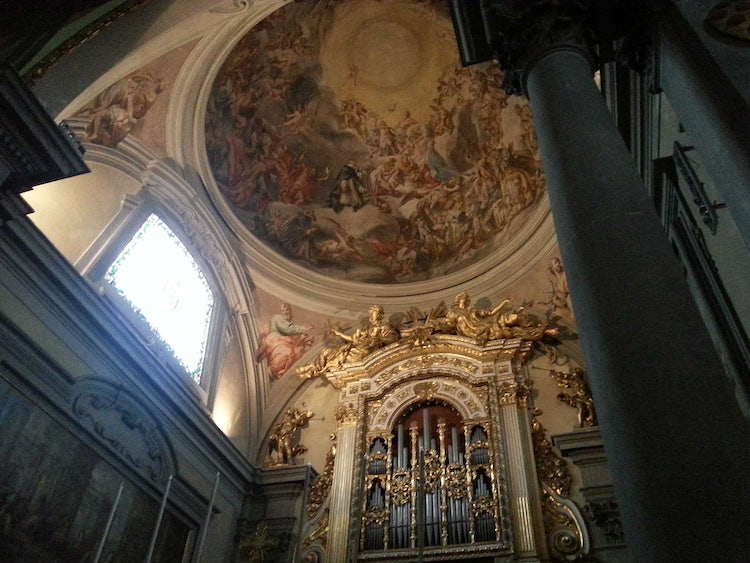 Why the Medici sponsored the arts?

Cosimo, with his successful banking operation, is said to have been motivated to finance the structural changes by his guilt for having made so much money from banking but we also known that the Dominicans were useful allies. Ironically, Savonarola, who denounced the decadence of the Medici at the end of the 15th century, came to prominence as the Dominican priory of San Marco.

The church seems to then have been in constant renovations and restoration for the next two centuries. Some of the changes include:

Not to mention the continuous work on the wooden beams that support the church’s roof - which became "heavier" with the new carved ceiling. Even the façade, in Neo-Classical style, was built in a much later addition in 1777–1778. 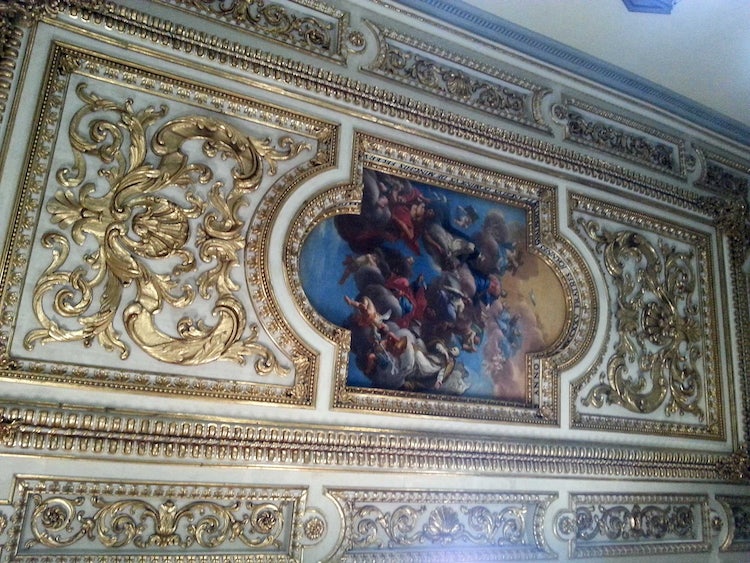 Highlights within the Church

After coming in from the wide open space of Piazza San Marco, the church gives you two immediate impressions: 1) gray and full of shadows and 2) not as deep as one expects. But despite that, the subtle Gregorian chants that play in the background do much to cover the noise of the traffic outside and create an inviting atmosphere.

Formerly the walls were covered with 14th-century frescoes which have been lost or covered with plaster. However, as you walk down the side aisles today, you can still see traces of these frescoes in between the chapels. Much of the artwork that adorns the interior of the church dates after the 16th century, but there are a few interesting earlier pieces that grace the church walls.

As you enter to the right, the first altar on the right is decorated with the “Pala di Santi”, by Santi di Tito (1593). Another of his works, S. Tommaso in Preghiera (circa 1594) sits over the altar. This Florentine artist guided the shift from the counter-reform to Mannerism to Baroque.

The second altar features a “Madonna with Saints” by Fra Bartolomeo, a painter turned monk after listening to the Savonarola message. He gave up painting, but was later instructed to continue creating for the good of his brothers.

The third is a bit of a surprise: a large mosaic of the Virgin which once stood in the ancient Basilica of St. Peter in the Vatican from the year c. 750. It arrived in Florence around 1596, when the altar was built. The carved wooden box underneath accented in gold this holds some of the churches relics. 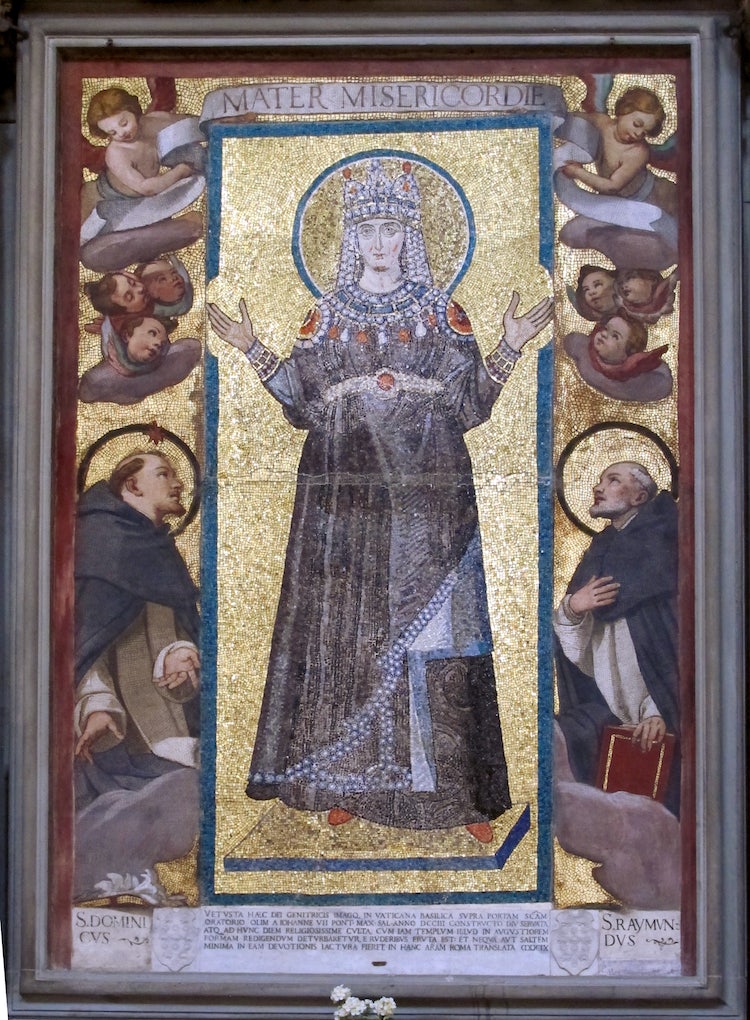 Cappella Salviati and the Cappella del Sacramento (accessed only from the museum) located in the Basilica are two highlights among the chapels created by Giambologna, a Flemish sculptor and architect who was much celebrated for his marble and bronze statuary in a late Renaissance or Mannerist style. You can see more of his work in Piazza della Signoria.

The Mannerist and one of the Florentine “reformers,” Bernardino Poccetti, painted the dome with frescoes. Those on the wallks right before the chapel were executed by Domenico Passignano, a painter from the late 1500’s - early 1600’s. His technique was described as “clarity in formal order and legibility in content”, practically the essence of the counter-reform which asked for strong images in a structured setting that were easy to read and interpret by all viewers.

The walls of the “Cappella del Sacramento” (accessed only from the museum) was also frescoed by Bernardino Poccetti. Many of the pieces inside were executed by 16 and 17th century Tuscan artists such as Santi di Tito, Jacopo da Empoli, Daniele Crespi (Milanese), Francesco Curradi and Francesco Morandini. 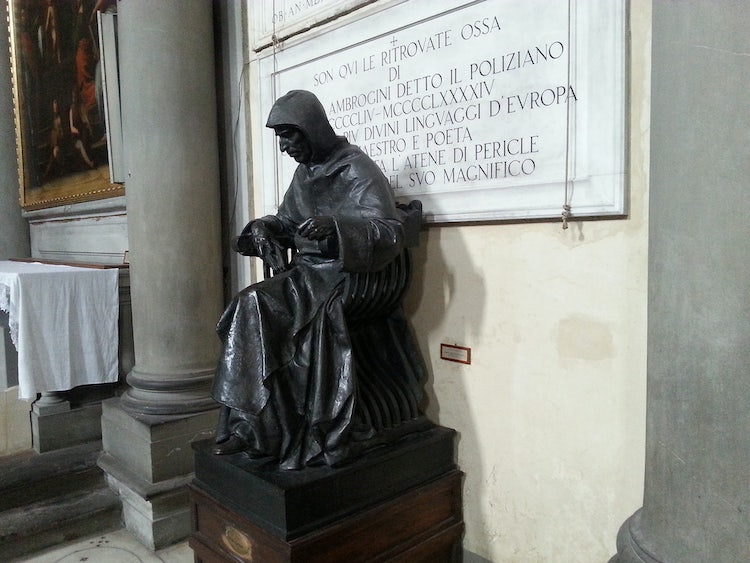 The statue that you see is of a man who, at least for a limited time, changed the destiny of Florence: Savonarola (1498) was an Italian Dominican friar and preacher active in Renaissance Florence. He was known for his prophecies of civic glory, the destruction of secular art and culture, and his calls for Christian renewal. PS. Notice how he is sandwiched in between some of those original frescoes mentioned above.

The last piece to look for is the "Presepe", a nativity scene composed of an interesting mix of pieces. The Christ child is from Donatello's workshop whule the Virgin Mary, Joseph and other pieces are by Giovanni della Robbia. Almost life-sized, this touching family scene graces the church year long. 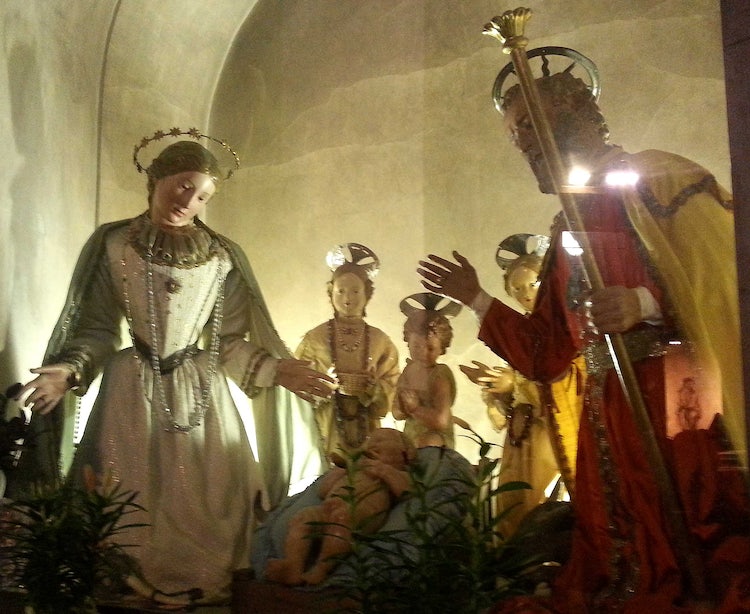 The Museum of San Marco

Next door to the Church is the Chiostro di Sant'Antonino, decorated with faded frescoes by Fra Angelico and other Florentine artists. In the Ospizio dei Pellegrini, where pilgrims were cared for, there is a superb collection of free-standing paintings by Fra Angelico and his followers. At the top of the staircase on the way to the dormitories is Fra Angelico's Annunciation (1440), an image of great tenderness and grace. Read more about and plan your visit to the San Marco museum.