Parades, Calcio Storico & Fireworks are part of the celebrations

On June 24, Florence celebrates the feast day for its patron saint, St. John the Baptist, considered the "symbol of moral rectitude and political correctness"* on whom medieval Florence aspired to build its economic fortune and good government of the Republic. The image of the saint was even stamped on the city's currency, the florin.

Consider that many shops and offices close in the afternoon, if not the entire day in Florence, for feast day celebrations.

Every year for St. John, the city organizes several cultural and folkloric events that end with the magnificent fireworks show, called i fochi di San Giovanni by Florentines. After two years of the traditional fireworks display being canceled because of Covid, we finally will have them again this June 24, 2022! 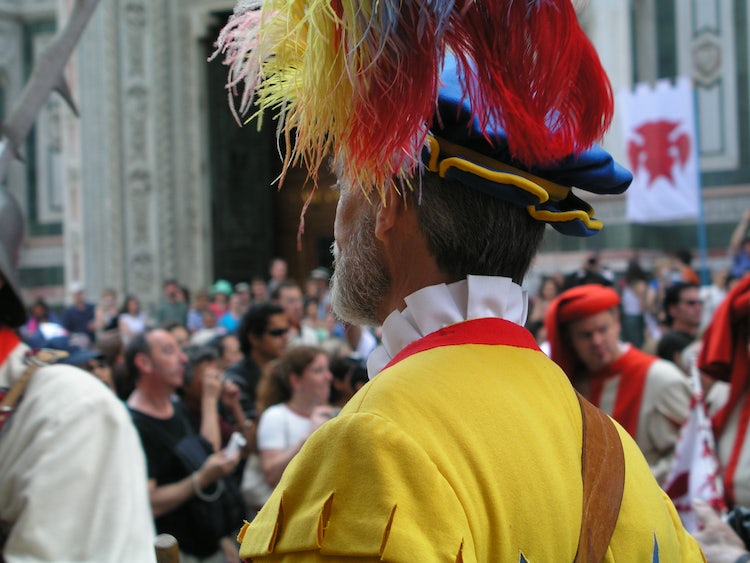 The celebration feast of St. John has ancient origins: nobles and lords would celebrate the patron saint of the city by donating large "candles" or votive offerings called ceri in Italian to the churches, consider back when there was no electricity and this was the only way to light an interior. Churches needed lots of candles, it was a large expense.

With the growth in the city's importance as well as the lords, the candles became larger, more beautifully decorated and valuable. Some were made especially for the Baptistery (which is dedicated to the saint) and others were made especially to be sold. All funds were donated to the Church. You can read more about this history of past traditions on the Duomo's page dedicated to San Giovanni.

In the morning: civic parade and mass 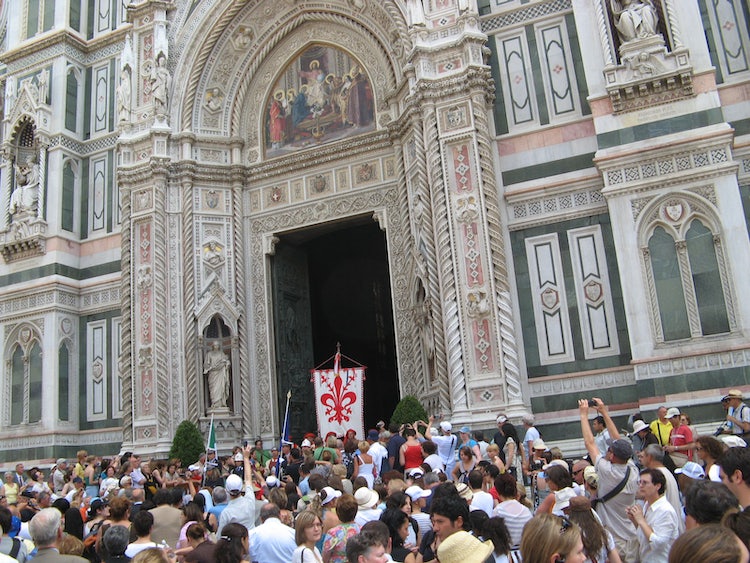 Even today, the morning of June 24 sees a small civic parade starting at 9am that includes the city's major and other political officers, following the city standard from Palazzo Vecchio, the center of civic power in the city, and symbolically takes the offering of candles to the Baptistery in Piazza Duomo, the religious center in Florence. There, the Archbishop of Florence receives the offering and all follow into the Cathedral to celebrate Holy Mass (around 10:30am).

For non-religious celebrations, at 6pm the mayor of Florence will present 10 gold Florins to 10 people who have distinguished themselves for their work in a social, civil or cultural area.

Among the events planned for this year is free entrance to the Museo del Duomo for all residents of Florence and province during the entire day of June 24th. The Opera di Santa Maria del Fiore is offering this gift to local residents for the celebrations of the patron saint as we all await the Baptistery to reopen after its current works of restoration (the Baptistery is dedicated to St. John the Baptist). To enter the museum with free admission, you need to show up at the ticket office in piazza Duomo 14 and show an ID card. Entrance will be allowed every 15 minutes to a maximum of 50 people at a time, with the first entrance at 10.15am and the last one at 3.30pm, with the museum closing at 5pm.

Reopening of the San Niccolò Tower

June 24 is also used to mark the opening of the San Niccolò Tower by the Arno river. One of the oldest towers that lines the ancient walls that surrounded Florence, the tower was restored and opens to the public only during the summer period.The top of the tower offers a unique panoramic view over the city as well as the Ramps by Poggi that lead up to Piazzale Michelangelo.

The tower can be visited until September 30th, open every day from 5 to 8pm (until August 31st, then from 4 to 7pm from Sept . 1st). Small groups go up at a time, with a guide to learn the history of the fortified tower. Entrance costs 6 euro, free for those that have the Card of the Fiorentino. For more details and to book (required), you have to contact Mus.e - Palazzo Vecchio at +39 055-2768224 or info@musefirenze.it. From June 25, the other towers: Torre della Zecca, Porta Romana and  Bastione di San Giorgio will also be open with guided visits.

Some events start a bit earlier than the 24th, like the annual "NOTTURNA DI SAN GIOVANNI" will held on Saturday, June 18, 2022. It is a fun 10K race run around the city's main monuments, the only one done at night. Read more details on the official website. 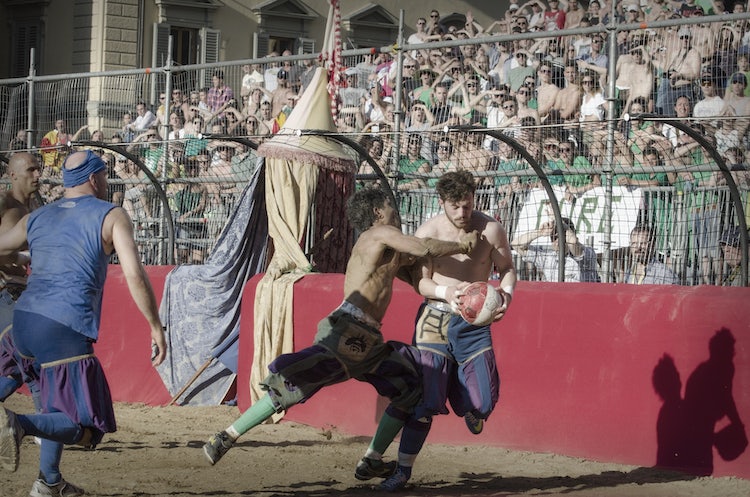 It is tradition that on June 24, the final match for Calcio Storico Fiorentino is played. The fascinating game, born in the 16th century in Renaissance Florence, is a mix of soccer, rugby and wrestling. It generally gets quite aggressive. The two teams that won the two semi-final matches among the four teams - the teams are by neighborhood and are Santa Croce (blue), Santo Spirito (whites), Santa Maria Novella (reds) and San Giovanni (green) - play on June 24th at 5pm on the special field set up on Piazza Santa Croce for the entertainment of both residents and visitors alike.

Before the match, around 4pm, a historical parade starts from Piazza Santa Maria Novella and winds its way through the city center to arrive in Piazza Santa Croce. This year, 2022, the games will return to normal! For more details and dates, check out this article.

The "fochi di San Giovanni" or fireworks of St. John 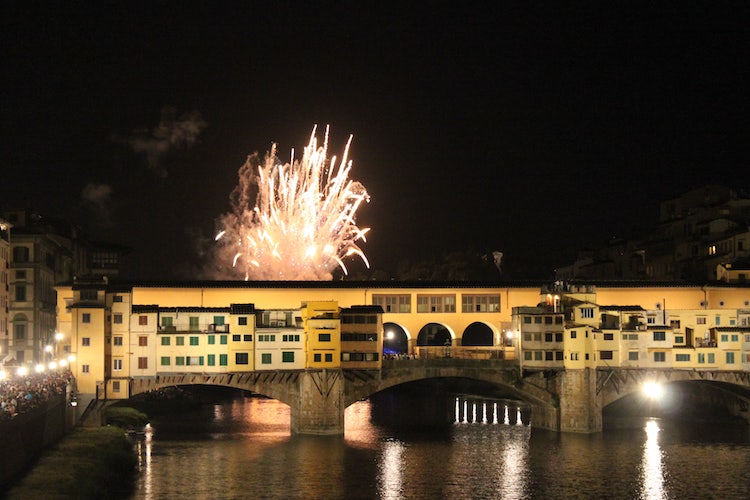 The long day of celebration for Florence's patron saint end with a spectacular fireworks show.After 2 years without, we are happy to report they are back this 2022!

The fireworks take place sometime between 10 and 11pm and are set off from dal Piazzale Michelangelo, an elevated positing that makes it possible to see them from various places across the city.

For the occasion, many Florentines and visitors spend the evening out, stopping at one of the many "strategic" points from which to admire the show of lights over the city.

Some choose to admire the show directly from Piazzale Michelangelo but many more from the streets along the Arno called "lungarni" where there are also many areas offering refreshments and seats, such as the beach on Lungarno Serristori (right below Piazza Poggi).

In the historical center, many hotels, villas and restaurants that have a terrace with a view organize special evenings with cocktails, dinners and entertainment before the fireworks show (for example, the Grand Hotel Cavour and Villa Bardini).

Starting in the late afternoon, Piazzale Michelangelo and the streets nearby start being closed and alternate routes are enforced. Some of the streets along the Arno are also closed so it is best to move on foot or to park far from the area and then walk to the riverside.

Enjoy the day and evening fireworks! See you there!