A place where time stands still

The Stibbert Museum is siturated in the beautiful Villa di Montughi, built by Frederick Stibbert, a collectionist and Anglo-Italian businessman from the 1800’s who was resided in the villa.

The house-museum hosts a curious and large collection of weapons, armor, clothing and objects from different epochs and backgrounds, collected by Federick during the course of his life.  At the time of his death,  the villa and the collection were donated to the city of Florence.

The Stibbert Museum offers an original and unique experience, a journey back in time to an ancient dwelling far from usual: furnished and decorated with antiques from around the world. 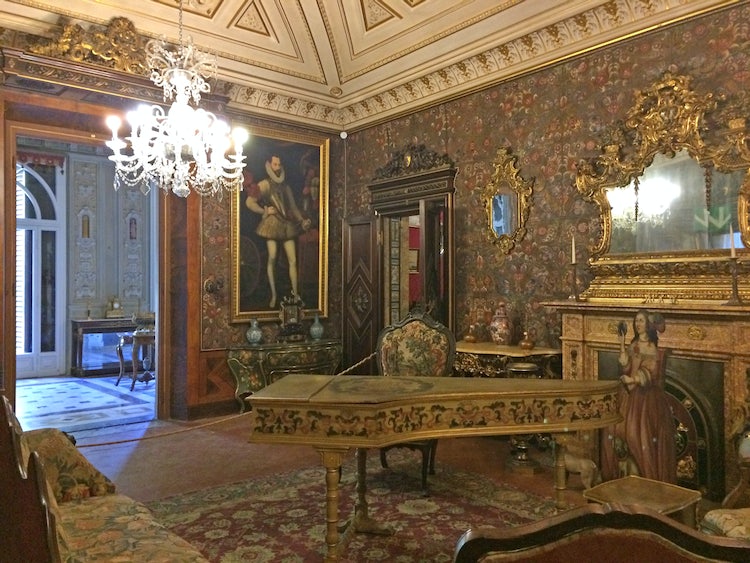 A tour of the museum winds its way through the various rooms of the villa, which are warm and friendly, where we can almost imagine Frederick Stibbert in person sipping a cup of tea or studying one of his many books and in the other rooms, we pass through the displays of his collection, organized in a very orderly and precise manner.  The rooms are so full that one can easily lose themselves in the contemplation of it all. 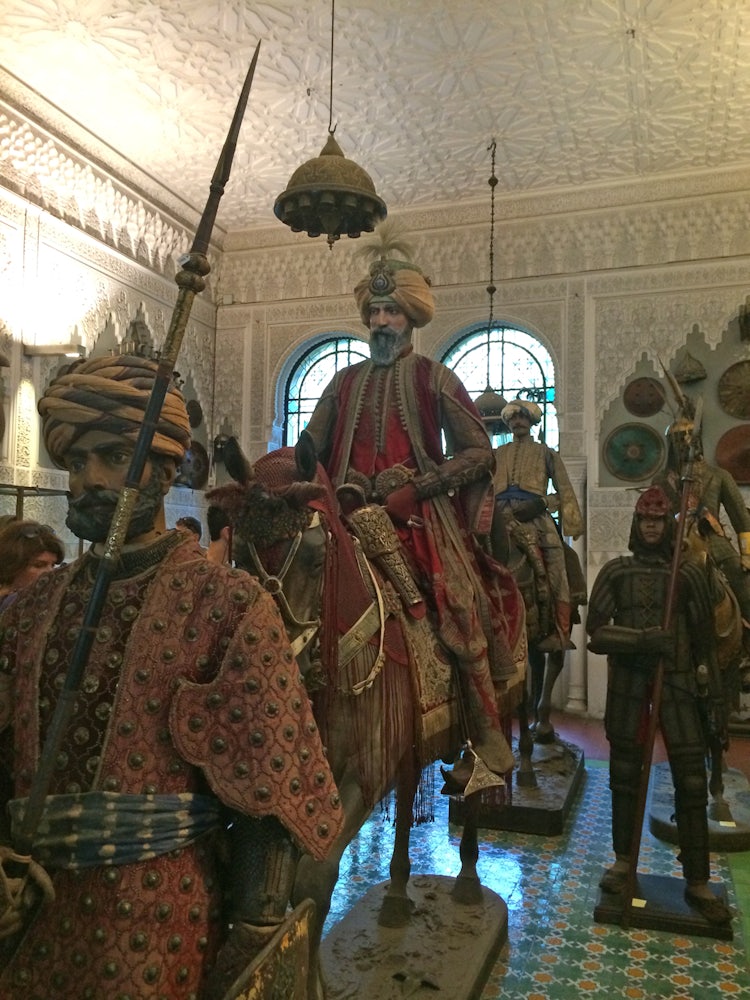 There are almost 50,000 pieces in the collection at the Stibbert Museum, most of which was not only collected, but also arranged on display by Stibbert himself. A small portion of the objects available for viewing were purchased after his death through donations to the museum.

Villa Montughi is surrounded by a beautiful park set up in a romantic English style, projected by architect Giuseppe Poggi. As you walk among ancient trees, your focus can not not fail to fall on the eccentric Egyptian temple overlooking the lake, built by Stibbert himself who was passionate about, among other things, Egypt.

Located just outside of the city center (the museum is easily reached by bus from the Santa Maria Novella train station), the Stibbert Museum is among the more popular and visited in Florence. Suitable for the young and the more mature; ideal for the avid collectionists of weapons and armour, but also perfect for those who are simply naturally curious.

Just a bit of History

The son of an English military man and Italian mother, Frederick Stibbert was brought up with a classical education at Cambridge, but Italy always was close to his heart. Upon the death of his father, he took possession of a large inheritance and went to live in Florence at Villa di Montughi, which now hosts the Museum. He pursued his dream to create a museum that would bring together his collection, his passion for antiques and of his travels from around the world.

Since he had no heirs, Stibbert decided that upon his death the Villa-Museum would become a true and proper museum open to the public. Therefore he donated it to the City of Florence, with the clause that they preserve the environment and the collection.

The museum layout took form over time, following the passions and curiosities of the Stibbert himself and creating a criteria that grew hand in hand with the number of pieces in the collection.

There are numerous pieces of weapons and suits of armour, an interest surely tied to his family's military career, first his grandfather, then his father who a participation in the campaign of Trentino.

A large portion of exhibition pieces are European, especially Italian but there are several pieces which represent the English, German and French traditions. A major part of the pieces come from the sixteenth century, however there are also pieces from the 1300’s. 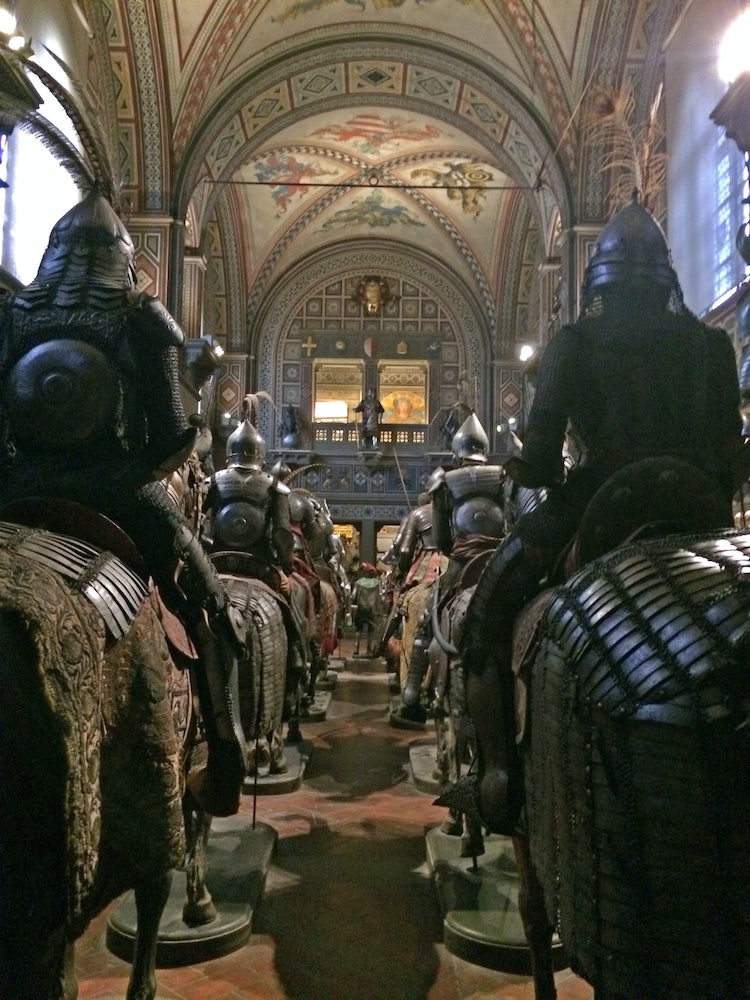 Many of the armory are exhibited in the beautiful and suggestive Sala della Cavalcata, where you will find a life size representation of soldiers and horses dressed for war and pagentry.

There are two rooms in the museum that are dedicated to Islamic armory, which come from his travels to the Near and Middle East areas.

There are three rooms which exhibit Japanese armory with almost 100 complete suites of armor and various other pieces, thus making this one of the most exhaustive collections outside of Japan. This section of the museum is open only upon request with a reservation.  Available times are on Friday at 3pm, Saturday at 11an and on Sunday at 12 noon and 3pm. To make reservations send an email to: biglietteria@museostibbert.it

The Stibbert collection includes several pieces of artwork (among these is a painting by Botticelli), porcelain, Oriental and European clothing.

When you visit the museum, you will be accompanied (but not with a guided tour) by the custodians. The visit starts approximately every hour for a maximum of 25 persons per tour. It is possible to reserve a particular timeframe, with a guided tour by one of the curators (cost is 150 Euro) plus the entrance fee for each participant. You can reserve your visit by writing an email to direzione@museostibbert.it.

The Park that Surrounds the Villa

Stibbert entrusted the renovation of the villa and park Montughi to the architect Giuseppe Poggi - the very same person who was responsible for demolishing the city walls and creating the Viale dei Colli leading to Piazzale Michelangelo. Giuseppe Poggi created an “English park” with a pond, fountains, temples and caves. 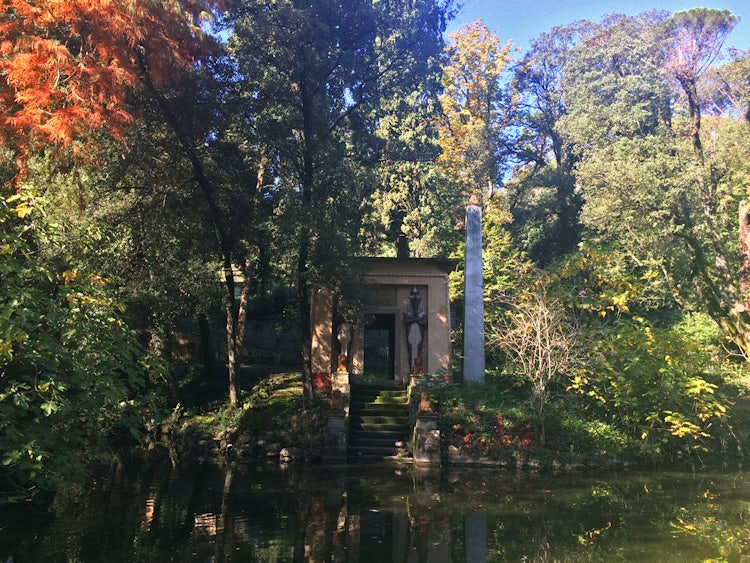 The Egyptian temple is one of the least expected constructions to find while walking the gardens dating from the 1800’s. It features a masonry entrance that leads down to the pond below, and is decorated with reliefs and statues of sphinx-shaped sarcophagi.

And yet, in the garden there is room for another surprise, the romantic, circular Hellenistic temple topped with a dome decorated with colorful tiles.

Inside the park grounds there is a stable, since both Stibbert and his mother were enthusiastic equestrians. There is also a greenhouse for the lemon trees, as known as a “Limonaia” where to day the Museum can organize events.

The Stibbert Gardens: has free entrance to the gardens with the following times
From April to October 8.00-19.00.
From November to March 8.00-17-00.
Closed every Thursday, 1st of January, Easter Sunday, May 1st, August 15th and December 25th.