The Church of Sant'Ambrogio in Florence

Sant'Ambrogio is a Roman Catholic church in Florence named in honor of Saint Ambrose, bishop of Milan. The church is in the Santa Croce area of the historical center of Florence, and the surrounding streets are simply known as Sant'Ambrogio, including the daily market nearby. The church doesn't generate crowds of tourists like the nearby basilica of Santa Croce does, but it does include several treasures inside that merit a walk around the area and a visit inside.

It is said the church is built on the site where the saint spent the night when he was visiting Florence in 393. While documents can trace the church's origins back to the year 998, it is likely that it could be older and on the location of a chapel along a female convent founded precisely in memory of the saint's passage. At that time, this area was outside of the city walls in the countryside. It was only with the last circle of city walls, built between 1284-1310 by Arnolfo di Cambio, that the church found itself within the walls and part of the city of Florence.

A tabernacle in painted terracotta by Giovanni della Robbia on one side of the piazza represents the saint blessing all those that, quite unaware these days, pass right by below. 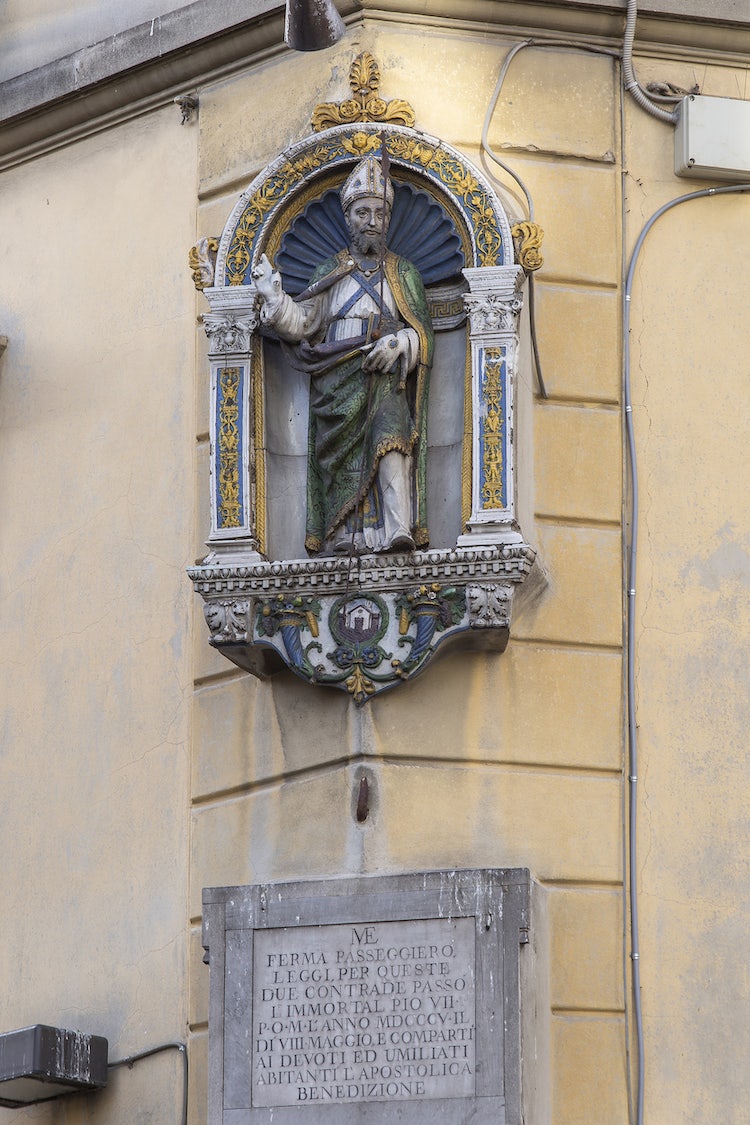 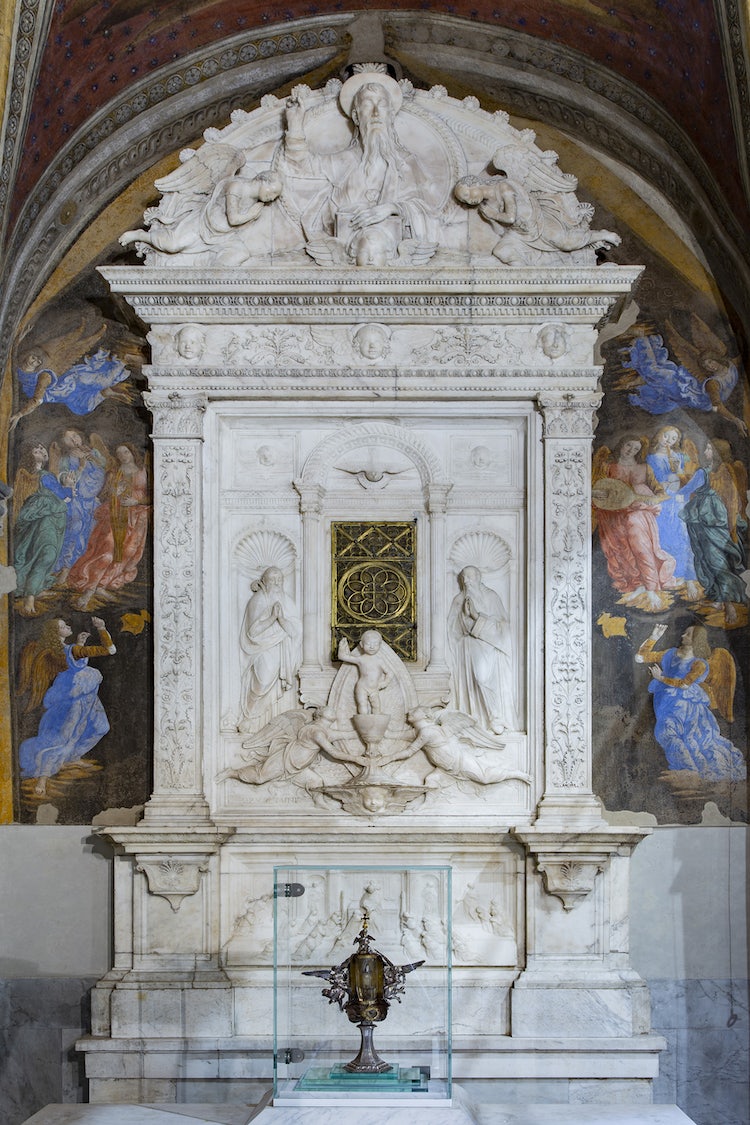 A legend says that on December 30, 1230, the parish priest named Uguccione celebrated mass and forgot to clean out the chalice used during services. The following day, the chalice was dirty but not with the wine used but with blood. The blood, said to be the fruit of divine incarnation, was placed into a crystal ampoule and this Eucharistic miracle transformed the church into a place of pilgrimage in the city.

The ampoule is still today conserved in the church within the chapel dedicated to it, the Chapel of the Miracle of the Sacrament, to the left of the main altar. The chapel contains a marble tabernacle by Mino da Fiesole and frescoes by Cosimo Rosselli which depict the events surrounding the miracle. The frescoes were renovated in 2017. 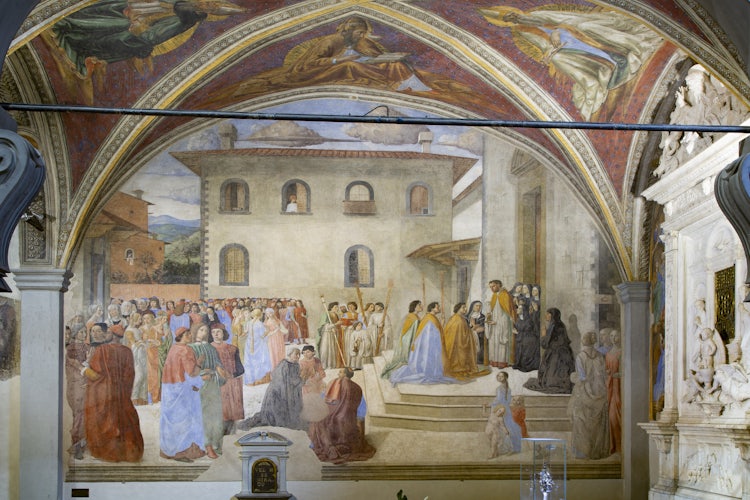 More detailed info on the chapel can be found on Wikipedia but alas only in Italian.

In 1595 there was a second miracle at Sant'Ambrogio: on Holy Friday a fire broke out in the side chapel next to the main altar. While the fire was contained quickly, in the frantic happenings pieces of a blessed host fell on the ground. After the fire, the fragments of the broken host showed no signs of them having been burned despite being in the area of the fire. After many years, the pieces were again examined and determined to be another Eucharistic miracle. They are also conserved in the church as a reliquary.

The church of Sant'Ambrogio is the final resting place for several important Renaissance artists and sculptors, including:

The art within is a well-kept secret 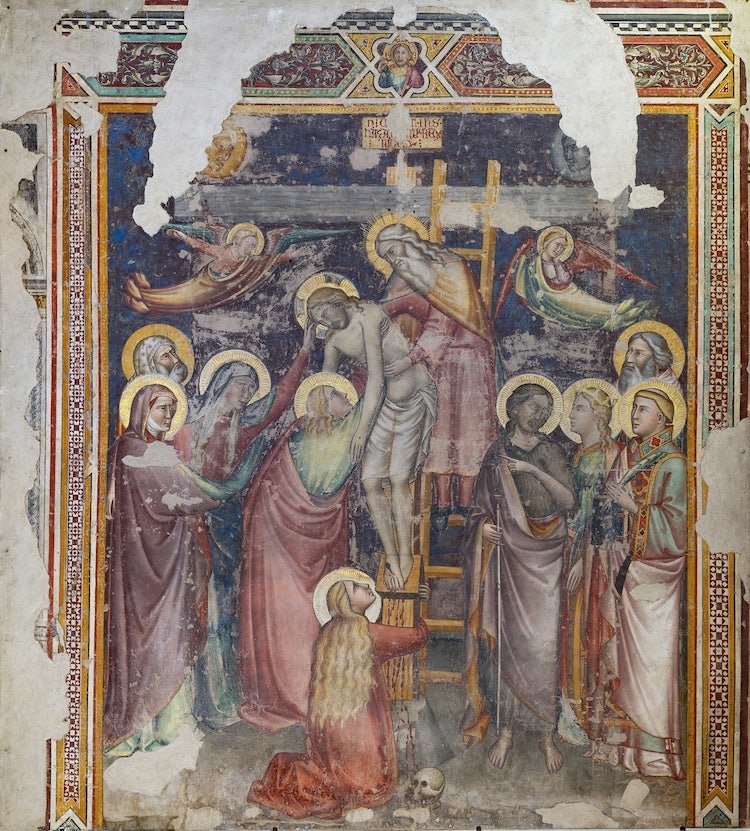 The church no longer maintains its more important works, since Filippo Lippi's "Incoronation of the Virgin", which was created for the church's main altar in 1441-1447 is now well-guarded at the Uffizi Gallery. But among the works you can still admire in the church are Leonardo del Tasso's magnificent "St. Sebastian", a wooden sculpture from the 1500s that a few years ago was part of a temporary exhibition at the Uffizi dedicated to wooden art of the 1400s. You can check out my itinerary across Florence of wooden sculptures that complemented that exhibition that today remain in Florence. 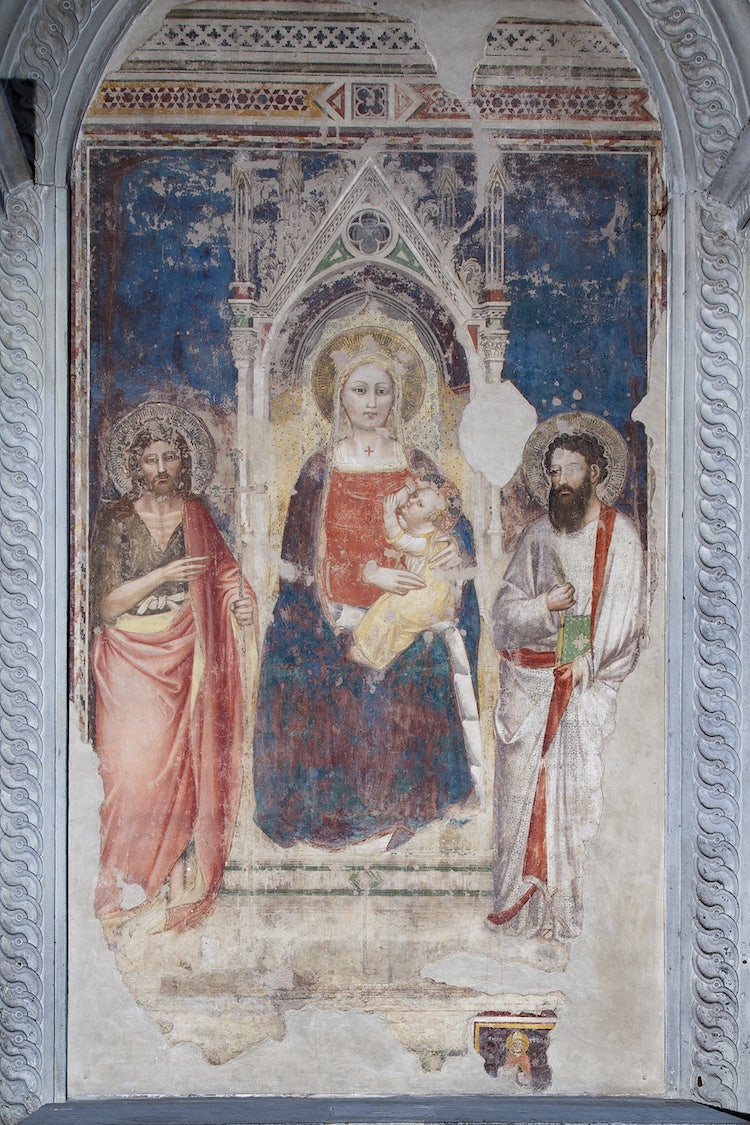 In the chapel Rinuccini, there is an affresco called the Madonna "del Latte" (1365-1370) with no specific attribution, aside from a Maestro from Andrea Orcagna's Workshop. She is called the Madonna of the Milk because she is portrayed breastfeeding baby Jesus and this sort of depiction, while not rare, is certainly not common. If you're interested in seeing another uncommon depiction of the Madonna, where she's pregnant, I would recommend you head to the Parish Church of San Lorenzo di Montefiesole in the countryside over Pontassieve. The painting there, called the Madonna del Parto, has a Virgin sitting down on a pillow with a pregnant stomach. The painting is attributed to Antonio Veneziano. I am partial to this church and this painting as I got married in this church ;-). You can find the most famous pregnant Madonna depiction of all in southern Tuscany in Monterchi, painted by Piero della Francesca with the main difference being that the Virgin is standing in that depiction.

At Sant'Ambrogio, I suggest you wander in and around the church to see the artwork around the church by the likes of Andrea Orcagna and Lorenzo di Bicci, among others, as part of your day exploring around Florence.