Some churches were built to be monumental

The Duomo or the Santa Maria Novella are excellent examples of churches built to impress the people. And then some churches became monumental after their conception, as is the case with the Basilica Santissima Annunziata.

History tells of a small oratory, back in 1081, built in fulfillment of a vow thanking the Virgin Mary for saving the city after the siege by Enrico IV. It was eventually abandoned and left in a state of disrepair just outside the city walls. In the mid-1200’s a group of seven men banded together to form the Order of Servite, dedicated to serving and honoring the Virgin Mary. When their responsibilities and numbers grew, they requested the use of the uninhabited oratory as a point of reference for their vigil outside the city gates in the hills surrounding Florence.

In se, this was nothing more than normal religious business.

It took a Miracle

In 1252, the friars decided to beautify the building with artwork dedicated to the Glorious Virgin during the Annunciation. According to the legend, the painter Friar Bartolomeo despaired over details in painting the face of the Virgin Mary. Distraught that he could not do her justice he finally fell asleep, exhausted from his attempts. He awoke to find that an “angel’s hand” had finished painting the details of her face, and it has since been called the “Miraculous Annunciation.” Even Michelangelo claimed it a divine piece of work. 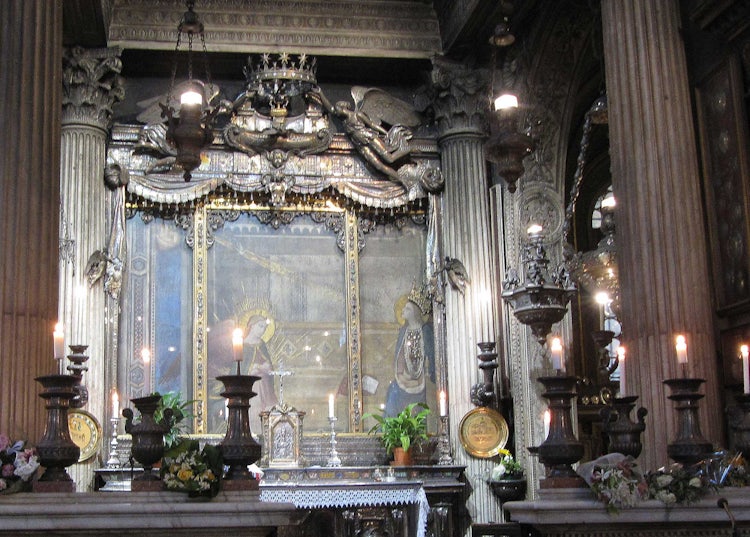 Due to this "miracle", the painting became the object of devotion and prayer for the people of Florence. It drew pilgrims from all over who would often leave votives at the church in the form of wax, plaster and wood sculptures, some of which were life-size and included the nobleman and his horse. As the church grew in importance, so did the size and grandeur of the church. What you can admire today, is years of reconstructions and additions to beautify the church. 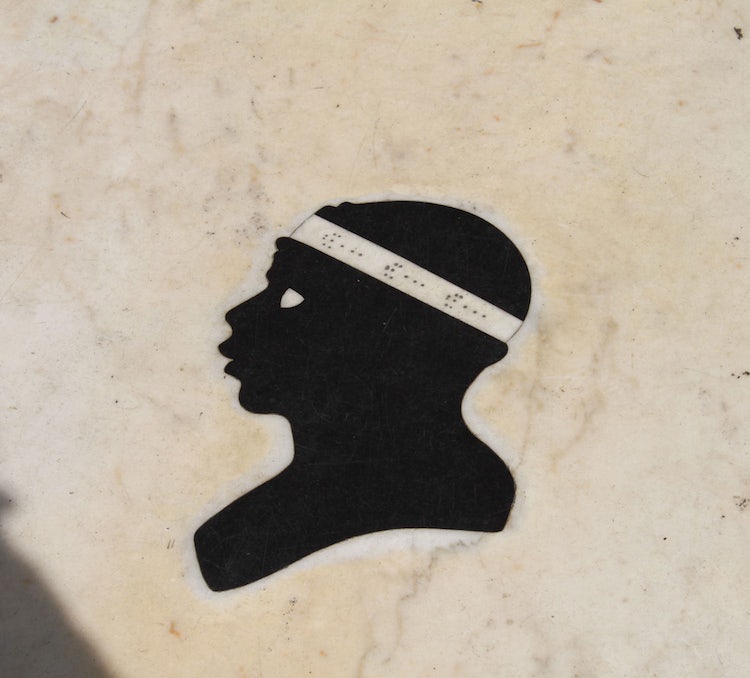 Designed by Michelozzi, the donation is signed on the strip above the columns and if you look underneath the marble steps before the front door you will see that this too bears the attribution to the beneficiary, Roberto Pucci.

The Cloister of the Votivi

During the pilgrimage to the image of the Virgin Mary, the devotees would often leave votive offerings, in fact over 600 items eventually filled this area. The collection became so large that in 1516, the idea of the cloister came about in the form of an atrium to store the offerings. It now is a unique showcase for the up and coming artists of the 1400’s (and recently restored collection of frescos) such as Pontormo, Rosso Fiorentino, and Andrea del Sarto. 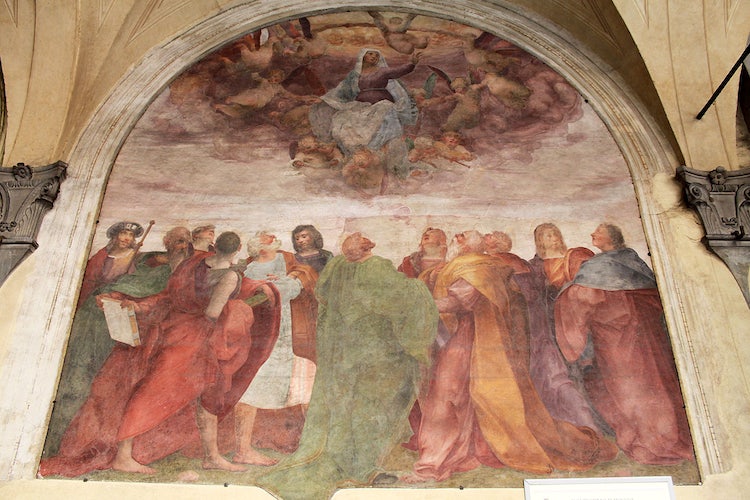 To the left of the Portico is the door to the Oratorio di S. Sebastiano, erected by the Pucci family in 1452 which gives access to one of the two doors opened for the Jubilee in Florence, the other being at the Duomo.

The Chapel of the SS Annunziata (to your left)

As you walk into the main door, the church seems a bit off kilter with the huge chapel on the left side, it offsets the symmetry of the main nave. However, that might not be what you first notice: my guess is you will take note of the rich baroque decorations on the ceiling, the marble coverings and more…  This is so very different from the other main churches that you have visited already, namely the Duomo, Santa Croce, Santa Maria Novella even San Miniato (and if you have not yet visited them...put them on your list to do.)

In 1447 the friars of Servi di Maria, with the help of Piero di Cosimo dei Medici, decided to create a “temple” based on the design of Michelozzo to preserve the painting of the Virgin. Rich with marble from Carrara, bronze designs, ceramics (most probably from the della Robbia workshop) and many other intricate pieces of art. The enhancement around the painting clearly demonstrates how the miracle was revered by the people. 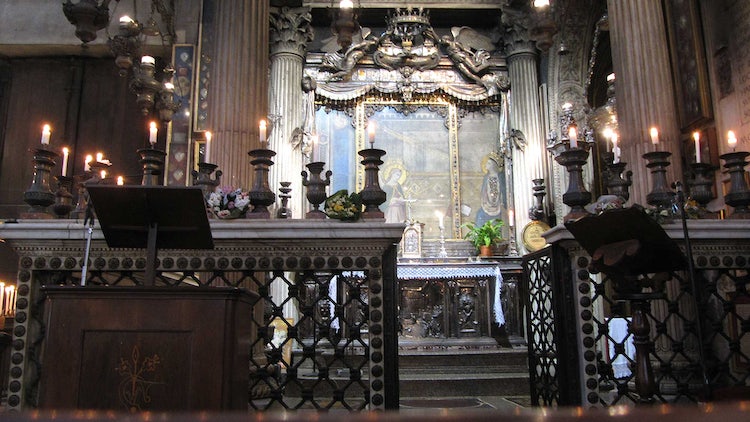 The body of the church is best admired by stepping away from the individual artists, many of which are lost in dark colors, shadows, and almost totally eclipsed by the dramatic decorations.  Try to simply admire the overall impression of the church. There are many contrasts with the neighboring churches, the floor here is a simple black and white checkered pattern as opposed to the intricate marble inlay in the many other locations. The side chapels and the altar are excessive in the decoration - however, elegant and attractive they will capture the eye with their flourishes, gold colors and heavy marble accents.

In the transept to the left of the altar, you can follow the signs for the Sacristy and examine the altar and the dome from up close including the artwork of greats like Giambologna restored and open to the public to admire.

As a side note, you will also find access to a free bathroom behind the sacristy. 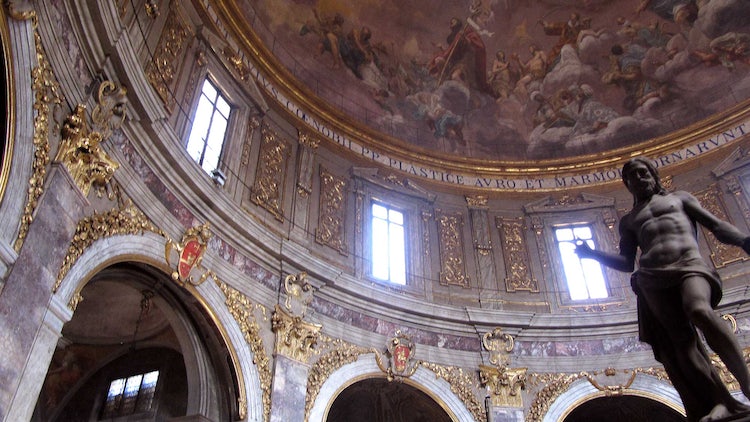 Across from the entrance to the Sacristy, behind the rich red curtain is the doorway which will lead you to a quiet little oasis within the church, which is known as the Cloister Grande or "dei Morti." Though reworked several times over the years, it still reveals a pleasing and harmonious image.

There are 25 “lunette” which have been painted by several different artists. Looking back over the entrance you will see a sarcophagus with the Falconieri family logo, the two falcons, and a ladder, this is the same family who gave the church Saint Giuliana (preserved in glass by the altar) and her uncle, one of the founding seven saints, Alessio Falconieri. The Cappella di San Luca, which opens off the cloister, belongs to the Accademia delle Arti del Disegno and many artists are buried within its vault: Cellini, Pontormo, and others. 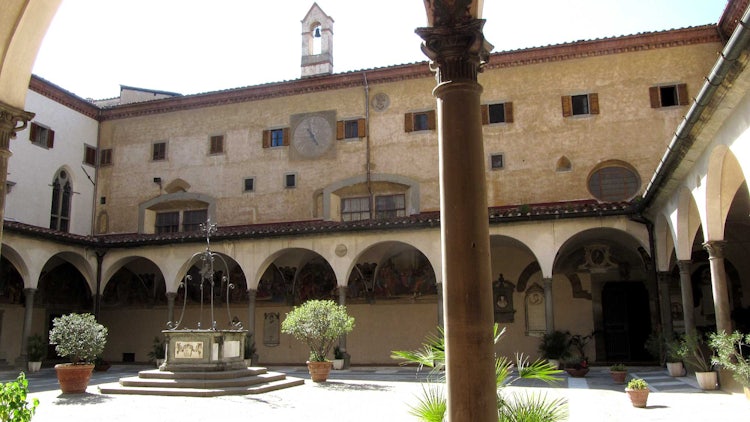 Things Nearby the Santissima Annunziata

As you visit the basilica, there is so much nearby that you can include in your day, start at the steps of the church overlooking the Piazza. This is one of the few spaces in Florence that was purposely built with the Renaissance style, which meant that it embraces the idea of a "Utopian society": ordered and accessible to all men. Overlooking the square is the recently restored is the Museum of the Innocenti.  Born as a "hospital of innocents" as a charitable work of the Silk Guild who commissioned Filippo Brunelleschi as the architect, the institute has seen various changes through the centuries but always maintaining its focus on helping children.

Actually, there are several museums close by, starting with MAF, the national archeological museum. The collection is composed of the original Etruscan Museum, several Greek and Roman antiquities from the Medici and Lorena collections and, at the core of the collection, is the Egyptian Museum a gathering of artifacts second only to the collection in Turin, Italy. With just a short walk you can also visit the Accademia and the statue of David or the small but engaging museum of the Opificio delle Pietre Dure, and the heart of many of the major restoration operations in Florence - and even worldwide.