The Most Beautiful Square

This square is designed to be appreciated for its elegance, its harmonizing colors and its peaceful character. Having said this, one can understand that the approach to the square will make all the difference.

The best way to enter the square is to walk down via dei Servi with the Duomo at your back. For 500 meters you will pass small shops, supermarkets and restaurants, an American style bakery (Sugar & Spice) and the cafè Robiglio dal 1928 (via dei Servi 112/r), which is definitely one of the more enduring cafés in Florence.  They have a yummy display of pastries and serve a frothy hot cappuccino for breakfast (lunch or dinner). 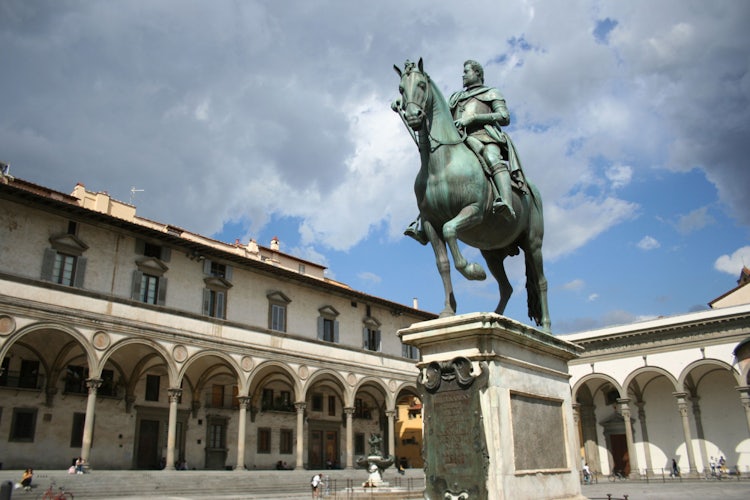 As you stand in front of the cafè, you can begin to view the mammoth statue of Ferdinand I and the white portico of the church SS Annunziata, and if you walk for just a few more meters you will enter into an open and airy space. This is one of the few spaces in Florence that was purposely built with the Renaissance style, which meant that it embraces the idea of a "Utopian society": ordered and accessible to all men.

Who Were The Architects?

The first layout came with the construction of the church (in 1298) for which the square is named, and the design was purely functional. However as the city walls began to expand, and as the church grew in importance due to the miraculous painting inside, it was obvious that the square would need to reflect its growing prestige in the city life.

The tranquil and magical design you see today was projected by Brunelleschi in 1419. Before beginning work on his most famous piece, the cupola for the cathedral, he was busy drawing up plans for the Foundling Hospital located in the square (to the right of the entrance), the first of its kind in Europe. It is here in this very square that he introduces the use of proportions and harmony which would become a trademark of Renaissance architecture.

Another famous architect to start a new trend was Bartolommeo Ammanati who began the construction of Palazzo Grifoni (to the immediate left of the entrance from the Duomo) in 1563, mixing for the first time color with the use of the characteristic “pietra”. The work on the villa was finished by Bernardo Buontalenti, including the gardens and internal courtyard. Palazzo delle Due Fontane (to the immediate right), a rather recent construction, was restored in a manner to be considered a twin to Palazzo Grifoni, in order to maintain the symmetric harmony of the square. 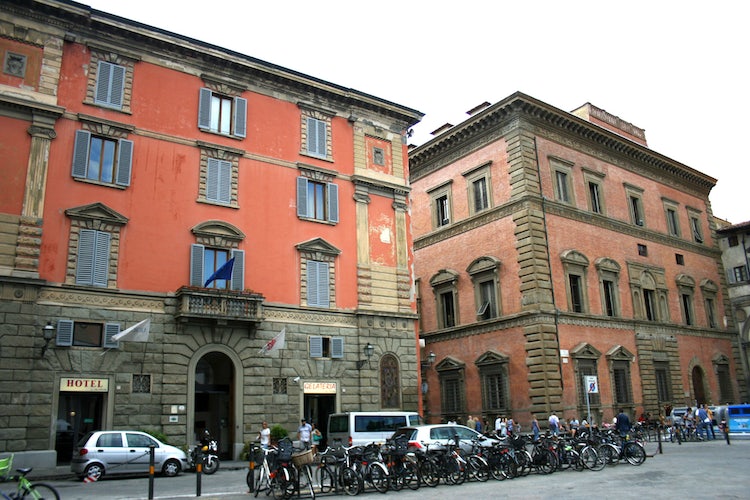 Other than the church itself, which you can read more about in our article, there is the romantic loggia (or portico) next to the Palazzo Grifoni: Loggia dei Servi di Maria. Built between 1516-1525, on a designed created by Baccio d'Agnolo e Antonio da Sangallo il Vecchio, the arches and columns complete the symmetry in the square.

Masterpieces Out in the Open

Though Brunelleschi intended for the circles between the columns on the Loggia for the Hospital to remain empty, Andrea della Robbia was selected in 1490 - long after Brunelleschi’s demise - to decorate the six frontal and 4 lateral concaves. The 10 “tondi” or medallions have the standard light blue backgrounds with white “putti” dressed in swaddling cloth to represent the abandoned children and orphans.

One can’t help but notice the massive statue of Ferdinando I de' Medici astride a stallion. This bronze was executed by Giambologna, who by now had reached international fame for his equestrian statues. The life size statue of Ferdinando I was cast in 1602 using bronze from cannons on Turkish galleys captured in war, and was placed in the square in 1608. 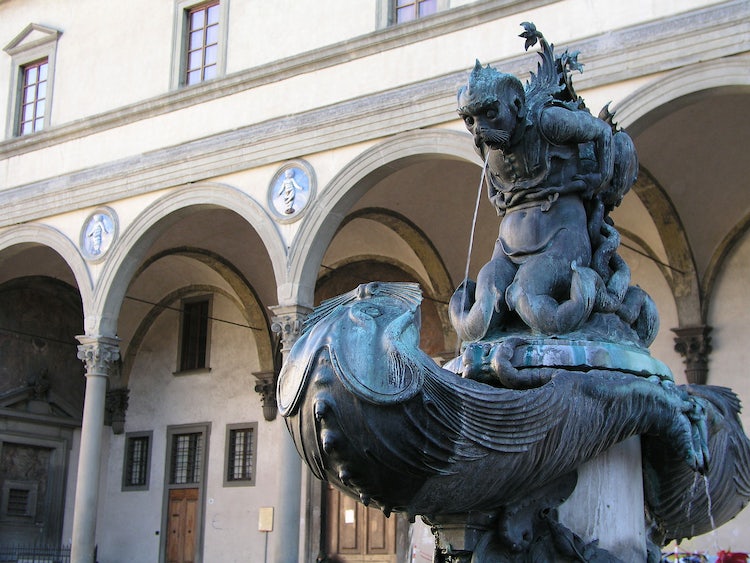 The two fountains were designed and created by Pietro Taccà, a loyal student and successor to Giambologna.  Particularly noteworth are the figures in the fountain.  For some these creatures may conjure up images of the film “Creature from the Black Lagoon”.

The fountains were intended for the Port of Livorno but Ferdinando II, the grandson to Ferdinando I insisted that they remain in Florence in this square. You will find a copy of the fountain in the port of Livorno near the statue of the “Quattro Mori”.

Secrets in the Square

Just a few things to look for as you walk around the square:

The last window on the right hand side of Palazzo Grifoni, on the last floor is always open. Why? The story tells of a newlywed couple from the 1500’s who were tragically separated by war. She waited for his return by this very window, but he never came home. She continued to wait by the window never giving up hope until the day she died. Upon her death, the family carried her body out and closed the window only to find themselves haunted by a frenzy of noise, light and disruptions. From that day forward the window remains open, just in case he comes home.

Some have even suggested that Ferdinando cast his gaze in the same direction, looking for his secret lover at the window mentioned above … but the timeframe doesn’t really work. However, if you look at the statue you will find a swarm of bees (91 to be precise) surrounding a queen bee. This was a clear reference by Ferdinando to his leadership skills and his industrious followers (the people of Florence and Tuscany). 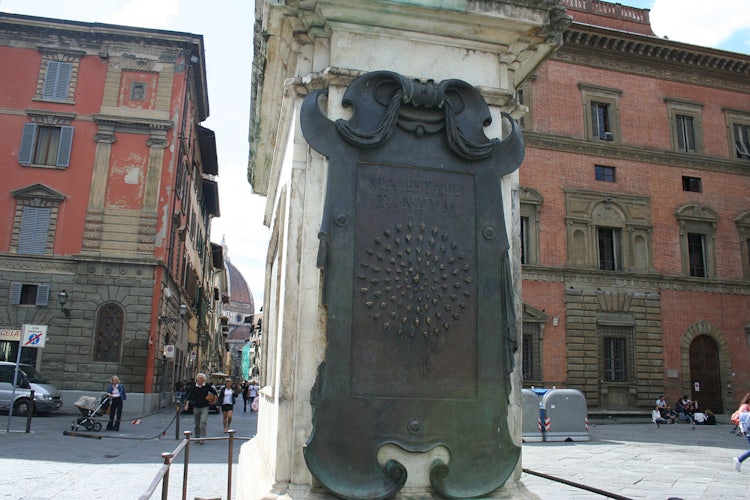 As you make your way down via dei Servi, stop at the corner of via de’ Pucci, where you will see a window that has the frame but has been sealed off. The would-be assassins of Grand Duke Cosimo I planned their attack from this very site. After hanging the attempted murderers sent by Pandolfo Pucci, the Duke ordered the window sealed, to avoid further temptation and as a warning to others.

Events in the Square

With the church of SS Annunziata and the large following for the Virgin, this square has been the scene for those events on the Florentine calendar which honor her. Namely the 8th of September and her birthday when the square lights up with colorful laterns for the Rificolona Festival. The Florentine New Year Celebration was traditionally on the 25th of March, not only coinciding with the beginning of spring but also the “Annunciation” or the announcement to Mary that she was to bear the Son of God. The square was where the Florentines would gather, even today, with feasting, music and games. Every year, as tradition would have it, there is also a large market in the square of SS Annunziata for the 6th of January and the Epifania.

Even if you aren’t here in Florence for one of these dates, you will find that the square is very active with summer concerts, markets for organic products, gelato, and handcrafts all throughout the year. 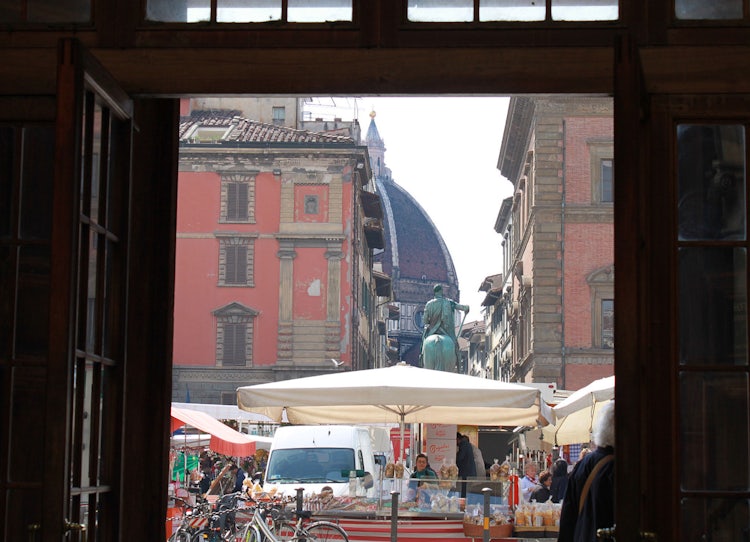 Places to Visit in or Near the Square

Though this square doesn’t find itself on many mainstream itineraries, it was actually the heart of the city for a very long time, and even today for those who live in Florence, Piazza SS Annunziata is a crossroad for going in many directions...be it the train station, the Duomo or Piazza Beccaria.  There are several important structures to visit in addition to the square:

The namesake of the sqaure, this stupendous church is a virtual who’s who when it comes to artists and their masterpieces.  It's true claim to fame comes from the miracolous painting of the Mary as she receives the angel Gabriel and the message that she is to give birth to the Christ child.

Restored and restructured in 2016, this hospital tells the story of Florence from a very touching point of view, those of children who were abandoned or orphaned.

The National Archeology Museum of Florence, also known as MAF, is considered one of the oldest museums of its kind. It was inaugurated by King Vittorio Emanuele II on the 12 of March 1871 and at that time it included the Medici and Lorena collection of Greek and Roman artifacts. Today it has grown to include a section on antique Egypt that rivals that of Torino. 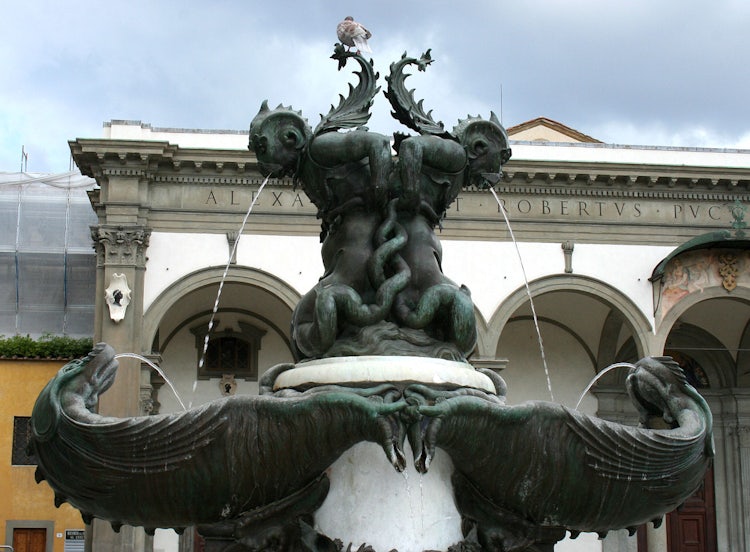