The Palazzo Vecchio Museum and Tower

Is time travel possible? At Palazzo Vecchio it is, with a trip back into history to three eras. Palazzo Vecchio offers Roman ruins, a Medieval fortress and amazing Renaissance chambers and paintings. A microcosm where art and history have been indissolubly bound for centuries. 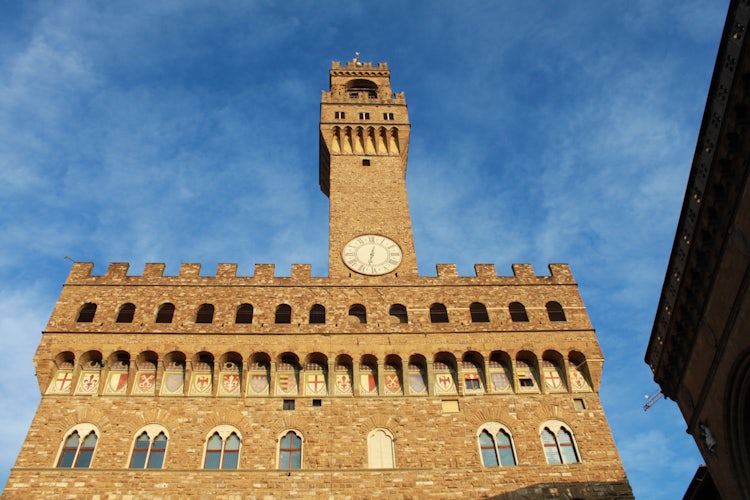 Palazzo Vecchio is the main symbol of civil power for the city of Florence, whose original project is attributed to Arnolfo di Cambio. Construction on the solid fortress began in 1299 above the ruins of the destroyed Uberti Ghibelline towers, testimony of the final victory of the Guelph faction.

The entire construction also rests on top of the ancient theater of the Roman colony of Florentia (dating back to the first century A.D.), whose ruins can be admired in the underground level. This area can be visited with a separate ticket, (4 Euro) or a combination ticket which includes the Palazzo Vecchio Museum and the Archaeological site. The area is suggestive organized with information and an interesting film to help you understand exactly what you are looking at underground. 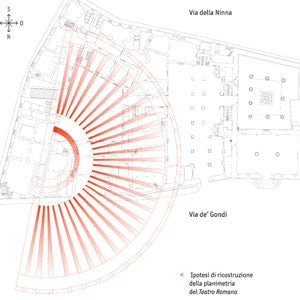 From the very beginning, the main section of Palazzo Vecchio was destined to host the city council which was composed of chief members the Guilds of Florence (the Priori) who governed the Republic of Florence. In 1342, the Duke of Athens, Walter VI of Brienne, enlarged Palazzo della Signoria towards Via della Ninna, giving it the appearance of a fortress and even adding a secret staircase for nightly exits. The severe medieval architecture conceals sumptuous halls and residential apartments.

The Salone dei Cinquecento (Hall of the Five Hundred) was built from 1494 during the Republic of Fra’ (friar) Girolamo Savonarola. The Hall is the largest and most important room in terms of artistic and historical value inside the palace. This impressive hall has a length of 54 meters, a width of 23 and a height of 18 meters. Paneled ceilings and large wall frescoes, golden decorations and imposing sculptures will leave you admiring in marvel. 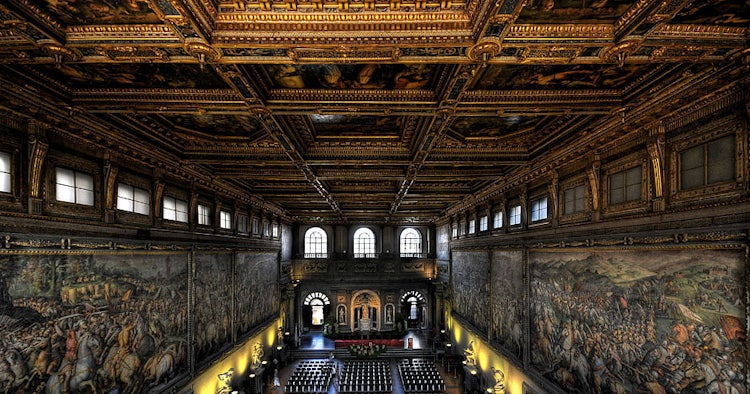 Pier Soderini, who was appointed gonfaloniere for life, selected the two greatest Florentine artists of the time, Leonardo da Vinci and Michelangelo Buonarroti, for the construction of two large murals to decorate the walls of the room, with battle scenes depicting victories of the Republic.

View more images of the treasures in Palazzo Vecchio through the Google Art Project!

Leonardo began to paint the Battle of Anghiari, while Michelangelo used another portion of the wall for the Battle of Cascina. The two geniuses of the Renaissance would have an opportunity to work for a certain period of time face to face, but none of their work was ever completed.

Palazzo Vecchio's current appearance is due largely to great works of renovation and interior decoration that were made around 1540, when Duke Cosimo I de’ Medici and his wife Eleonora of Toledo decided to turn the palace into their residence. The court of the Medici was transferred to Palazzo Vecchio (from Palazzo Medici-Riccardi), which was transformed into a fascinating labyrinth of institutional chambers, apartments, terraces and courtyards. All the rooms (the so-called Quartieri Monumentali) are magnificently decorated by artists such as Michelangelo, Giorgio Vasari and Donatello. 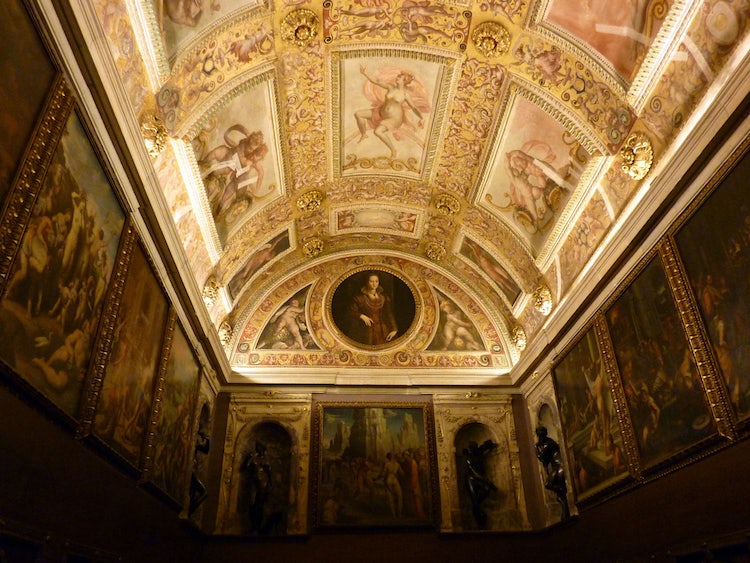 The Studiolo that belonged to Francesco I

Among the chambers, you will also discover secret routes, such as the spectacular private studiolo (studio) belonging to Francesco I, Cosimo’s Tesoretto, and the ceiling trusses that support the ceiling of Salone dei Cinquecento to know the mastery of Renaissance engineers. View entire list of tours at Palazzo Vecchio » 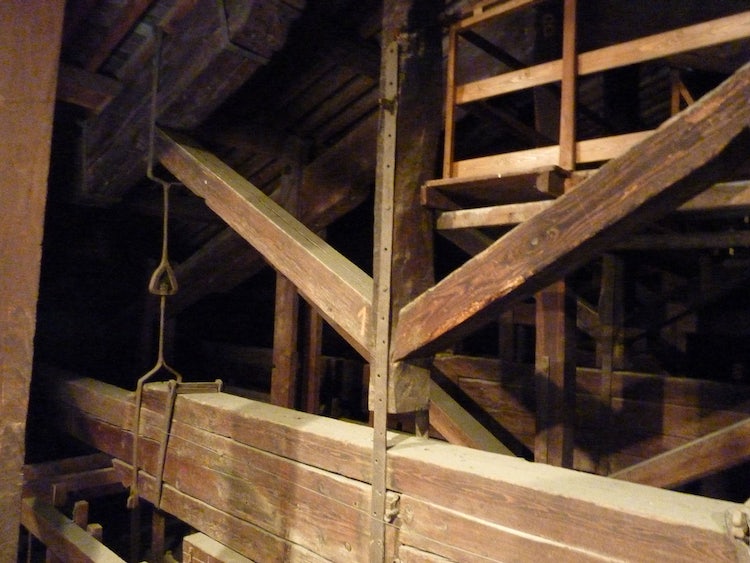 The trusses over Salone dei Cinquecento that support the ceiling

If you're visiting Florence with kids, Palazzo Vecchio is a must-see stop on your itinerary! The museum organizes many guided tours for families that are perfect for introducing history and Florence in a fun way! Check out the full list on their site, as some tours are for younger children (4-7 or 10 years old), some are from 8 and over and yet others only for 12 and over. You should find something that works for your family.

Between the first and the second floor, there is a mezzanine. It was created in 1453 by Michelozzo by lowering the ceilings of some rooms of the first floor. In these rooms Maria Salviati lived, Cosimo I’s mother, and the young princes. Today, the mezzanine houses the Loeser Collection, donated by the American art critic Charles Loeser who died in 1928.

The second floor was the more private section of the palace, featuring the elegant Apartments of the Elements, the Apartments of Eleonora of Toledo, and the original Hall of Priors, along with many small chambers and a chapels frescoed by Bronzino. The most interesting rooms are the private study of the Duchess Bianca Cappello (mistress and afterward second wife of Francesco I de’ Medici) and the Hall of Maps, the original Guardaroba where the most relevant documents were kept together with the Mappa Mundi, a six-foot-tall sphere which had been the largest rotating globe of its era, and dozens of geographic maps painted on leather, showing the world as it was known in 1563. Take time to look at them and see how much men in the Renaissance already knew about our world! 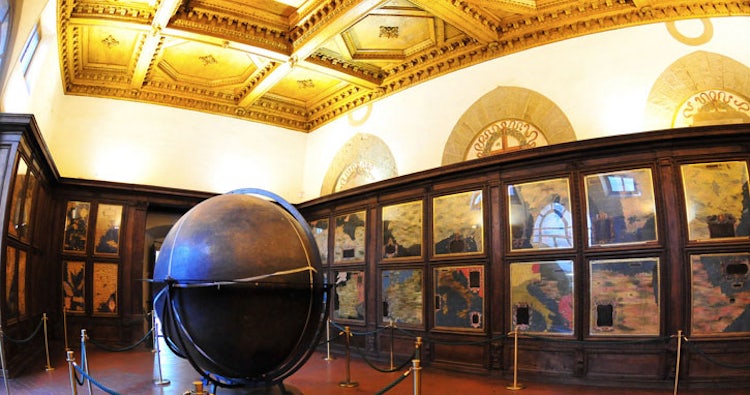 The profile of Palazzo Vecchio is crowned by an austere crenelated battlement, extending upward along the tower called “Torre di Arnolfo” or Arnolfo’s tower. It is one of the most imposing medieval towers remaining in Florence. Its height of 95 meters represents the highest civic symbol in the entire city. If you dare, 416 steps will take you to the very top of the tower to enjoy a breathtaking view of Florence, passing through the guardian passages that also offer spectacular views of the city and entire valley. The tower is open to visits as far as the second crenelated battlement where you can admire the massive pillars which support the prison in which Friar Girolamo Savonarola was held during his last days. The Florentines nicknamed this secret and quite difficult to reach room the “Albergaccio” (or very bad hotel, definitely intended). 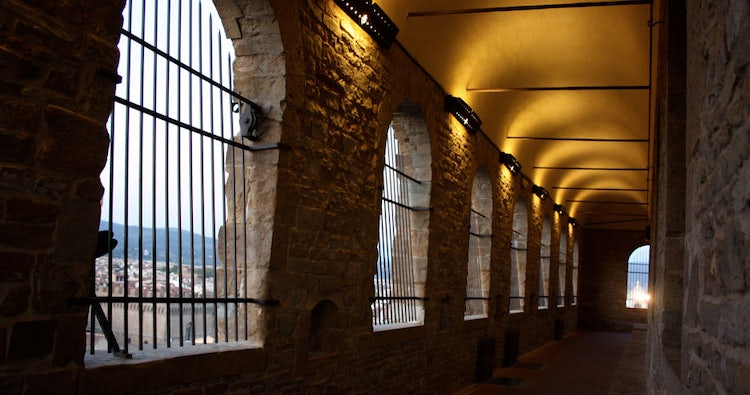 I personally find Palazzo Vecchio one of the most enjoyable museums in Florence. I adore its secret routes, perfectly suitable for visits by families with kids and curious visitors. By the way…the frescoes of the coats of arms and encrypted mottoes are the best setting for a treasure hunt! Chase the images of rhinoceros, weasels and turtles across the palace! I suggest you discover the links with these symbolic animals at sunset, reaching the top of the tower to enjoy an unforgettable view over the red tiled roofs of Florence! Have a fun visit!

Go on a tour in Palazzo Vecchio: choose the best one for you!

» Tour of the Secret Passages - this is where you can go see the trusses of the ceiling over the Salone dei Cinquecento, the studiolo that belonged to Francesco I - we have done it and it was very interesting as you move around the palace following hidden corridors put in place by the Duke of Athens as an escape route out of Palazzo Vecchio!

» Dan Brown: Inferno Tour of Palazzo Vecchio + Secret Passages - visit Palazzo Vecchio following the steps of professor Robert Langdon and his partner Sienna as they seek clues and run from their assailants. You'll get to see the trusses over the Salone dei Cinquecento, a part of the museum normally off the main visiting route, as well as other rooms included in the tour above.

» Palazzo Vecchio + Arnolfo Tower at Sunset with Optional Aperitivo or Dinner - while you can do the museum and tower on your own, going with a guide makes the history of the palace come alive! Truly exceptional considering it is followed by wine or a meal!

» Private Tour: Palazzo Vecchio + Palazzo Pitti + Boboli Gardens - highly recommend this tour if you want to experience the sights connected to the Medici family as a VIP, with a private tour. 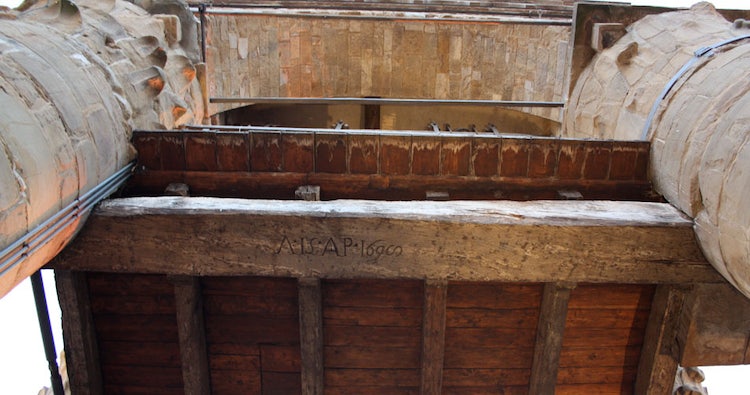 View of the albergaccio, or "very bad hotel", in which the friar Savonarola was held prisoner

** until June 24, 2019, because of the temporary exhibit "Leonardo & Florence, Selected Sheets from the Atlantic Codex", entry tickets that include museum increases by € 6,50 **

Museum: Full € 10 / Reduced € 8
Tower: € 10 / € 8
Museum + Tower: € 14 / € 12
In case of rain, the tower is closed but you can still visit the battlements (+€2)
The tower is closed to anyone under 6 years old and not recommended for anyone with walking difficulties or heart problems or asthma or anyone afraid of heights. Anyone under 18 has to be accompanied by an adult. Kids under 8 years old cannot visit the Roman ruins.

There are several tours of Palazzo Vecchio you can take which include:

» Tour of the Secret Passages

If you're interested in tours that are perfect for families with kids (from 4 and over), check out the offerings by the museum itself here.