The Innocenti Museum in Florence

After 3 years of works, the Innocenti Museum reopened its doors on June 24th, 2016 to the public. The museum is housed within the centuries-old Institute degli Innocenti and allows the public to enter its doors to glimpse its six centuries of history, its architectural spaces created by Brunelleschi and to the masterpieces housed within, which includes works by Botticelli and Domenico Ghirlandaio. 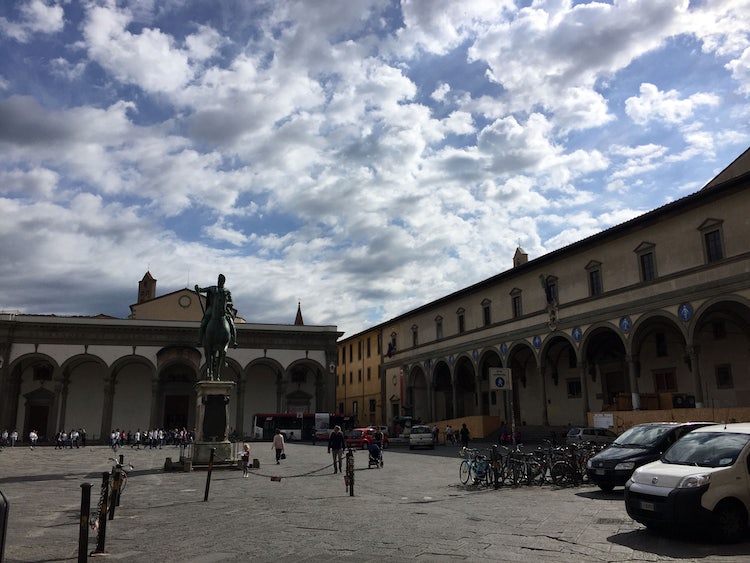 The Institute was born in the 14th century and as such is the oldest public institution in Italy. Since its inception, it has been dedicated exclusively to the hospitality of children, to their education and to protecting their rights. Born as a "hospital of innocents" as a charitable work of the Silk Guild who commissioned Filippo Brunelleschi as architect, the institute has seen various changes through the centuries but always maintaining its focus on helping children. Also known as the orphanage where children could be left anonymously, the Institute in modern times now offers services to children, pregnant mothers in difficult situations and mothers with young children as well as helps promote the rights of children. Within its doors, UNICEF's Research center is also housed.

The museum, in particular, used to consist of a few rooms on the top floor that housed the many important artworks that have been donated and commissioned for the institute through the centuries. I visited several years ago, and let's just say that the lighting was poor and while the artworks were protected, no one knew about the museum so it was practically a hidden gem that I recommended to those that had a bit more time to spend in Florence. Now that the museum has reopened, I hope it will slowly work its way into the itineraries of all those who appreciate art as well as learning more about the history of Florence. 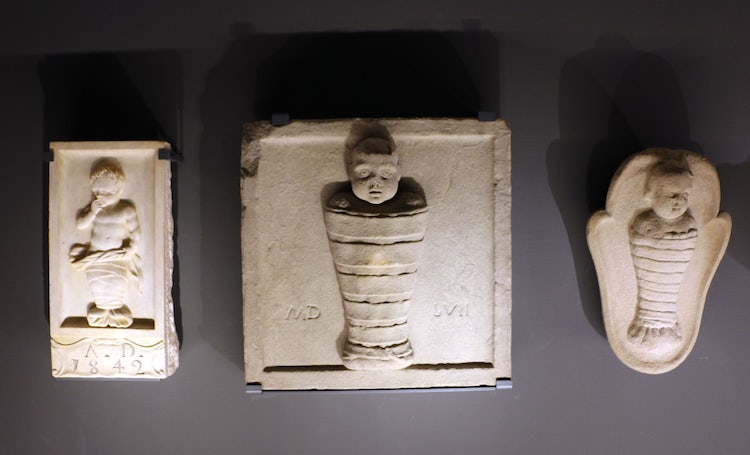 The new museum now spreads out across the entire complex and is divided into 3 "itineraries" or sections: within the basement where the entrance is located, the History of the Institute is presented, the ground floor highlights the Architectural treasures of the complex itself, from Brunelleschi's courtyards to the front Loggia and the first floor is dedicated to the Art housed within a dedicated gallery.

This first historical part highlights both the history of public assistance in Italy as well as to the daily goings on of the Istitute itself. You start the visit with a multimedia presentation which we highly recommend you sit and watch: the exceptional nature of the Institute needs to be understood within the context of 14th century Florence, when for the first time ever assistance was being provided to abandoned children. There used to be a wheel outside in the Loggia where a baby could be dropped off, no questions asked. You also get to see an evolution of the monumental complex through the centuries, in order to unstand the present look of the building.

The history of the Institute can be followed with works of art up until 1875, year in which the anonymous abandonment of children ended. Stories of daily life of the children, called "innocents", their care and entrustment to outside wet nurses for their care. The Historical Archive keeps record of the lives of all of the children that passed through the Institute's doors, a part which is showcased in the small drawers seen below. 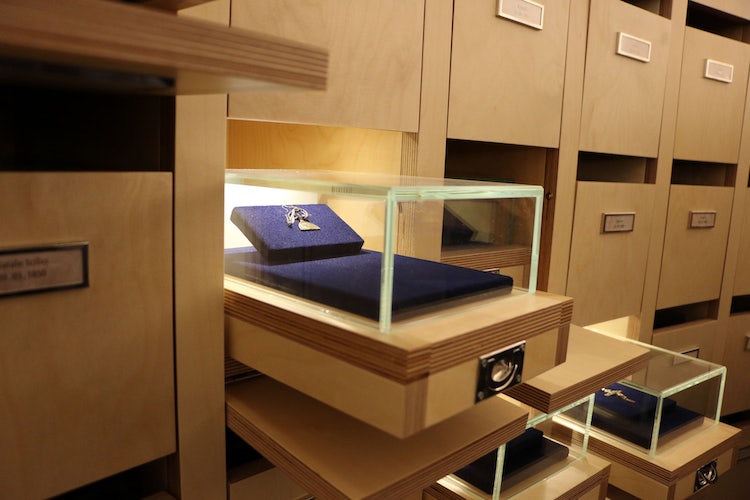 These "marks of recognition" were placed upon the abandoned children by the parents, who often parted with their offstring unwillingly when hardship was difficult to overcome. As a way of recognizing them in the future, they would leave a broken charm divided in half. One piece went with the child, the other with the parent in the hope that one day they could become one again. 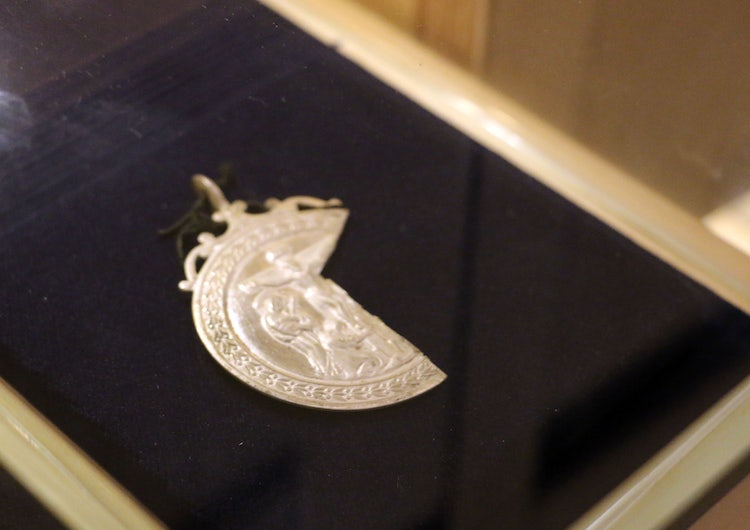 Such marks are quite heartbreaking, if one is a parent and considers that you had for some reason to part with your child.

The history section is not yet fully finished, as the sections arrive to 1875 - by November 2016, a section dedicated to the last century of the Institute should be completed. 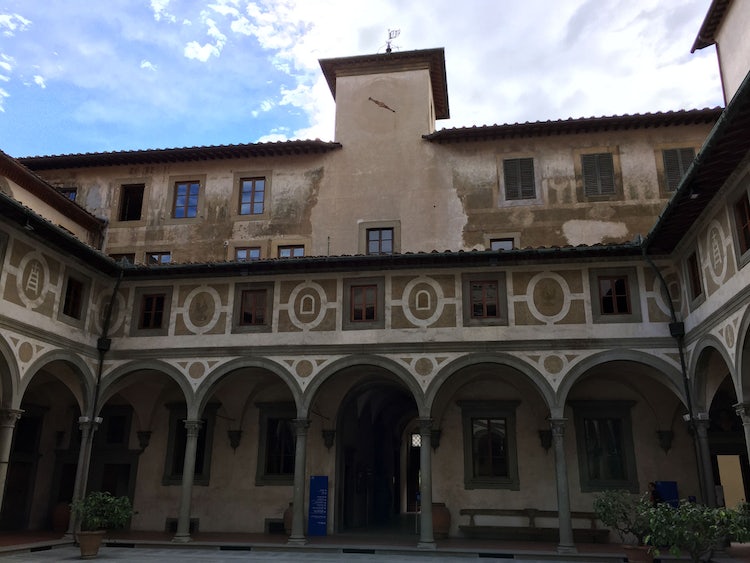 The Loggia on the outside of the complex, the Courtyards of the Men and of the Women are the heart of the Institute. These areas were a part of daily life for the children that lived here and today are recognized as architectural wonders of the Renaissance.

The long history of the Insitute starts in 1419 when Filippo Brunelleschi (the same architect who will remain famous for designing and creating the Duomo of the cathedral down the street) was entrusted with the construction of the hospital. The new, simple austere architecture used by Brunelleschi here eventually came to symbolize Renaissance architecture. The building has columns and arches that recall classical architecture, their mathematical measurements accurately taken and respected. The heart of the institute was the Cortile degli Uomini, the main courtyard that faces onto the piazza SS Annunziata. By 1590, a gallery had been build over the arches and enclosed, creating the loggia along the entire front of the building. This is one of the greatest novelties proposed by Brunelleschi and was so admired to then inspire and influence the look of the entire piazza, as the loggia across the way and in front of the church were added in the 1500s and 1600s. In 1487, the swaddled babies by Andrea della Robbia were added above the columns. 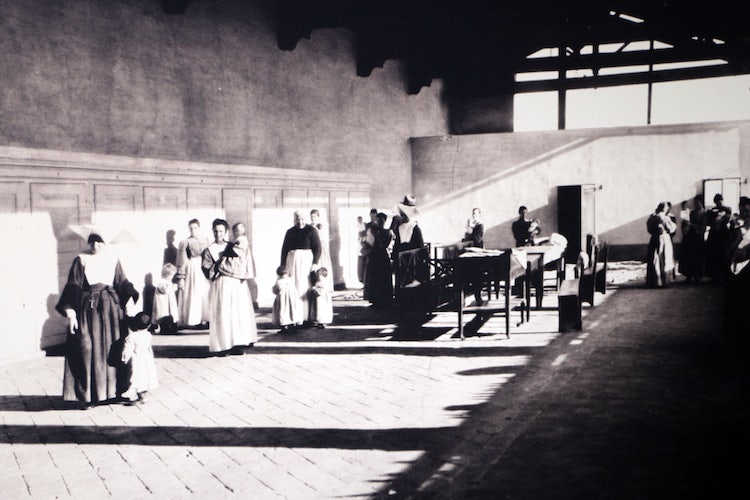 On the top floor, a terrace called Verone was once used by the Institute first as a place to dry freshly washed clothes and then as a place to ahng out and socialize for Institute workers with children. Now, the terrace has been designed as a cafeteria from which everyone - and not just museum visitors - can head to for a coffee and snack and the view! 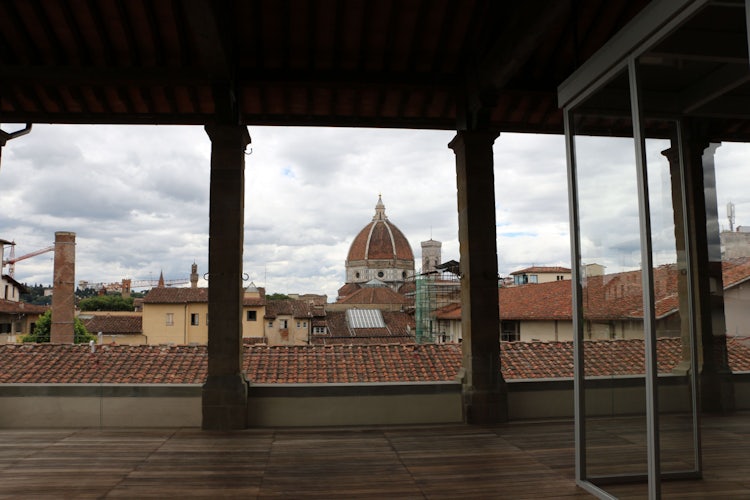 The museum's art gallery starts on the second floor in spaces that once housed the children and their wet nurses, today housing the most important section of the artistic patrimony of the museum. Here, the new setup of the museum is at once appreciated! Large backdrops and better lighting, with the entrance at one end and not in the middle guiding you along the hall. Here are works by Sandro Botticelli, Domenico Ghirlandaio, Piero di Cosimo, Neri di Bicci, Lucca della Robbia and Giovanni del Biondo. 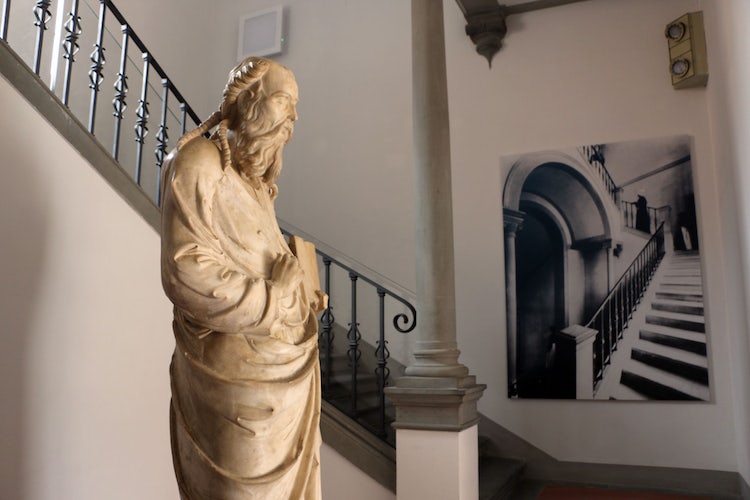 Make your way up to the museum by climbing up the great staircase of the 1800s, where you'll find the great marble statue of St. John the Baptist which was originally placed in one of the tabernacles of Orsanmichele. The great figure is attributed to Simone Talenti, architect and sculptor from the mid-14th century who completed the statue for the tabernacle of the Silk Guild. Admire the intricate curled hair and the expressive facial features of the patron saint of the guild before heading up. 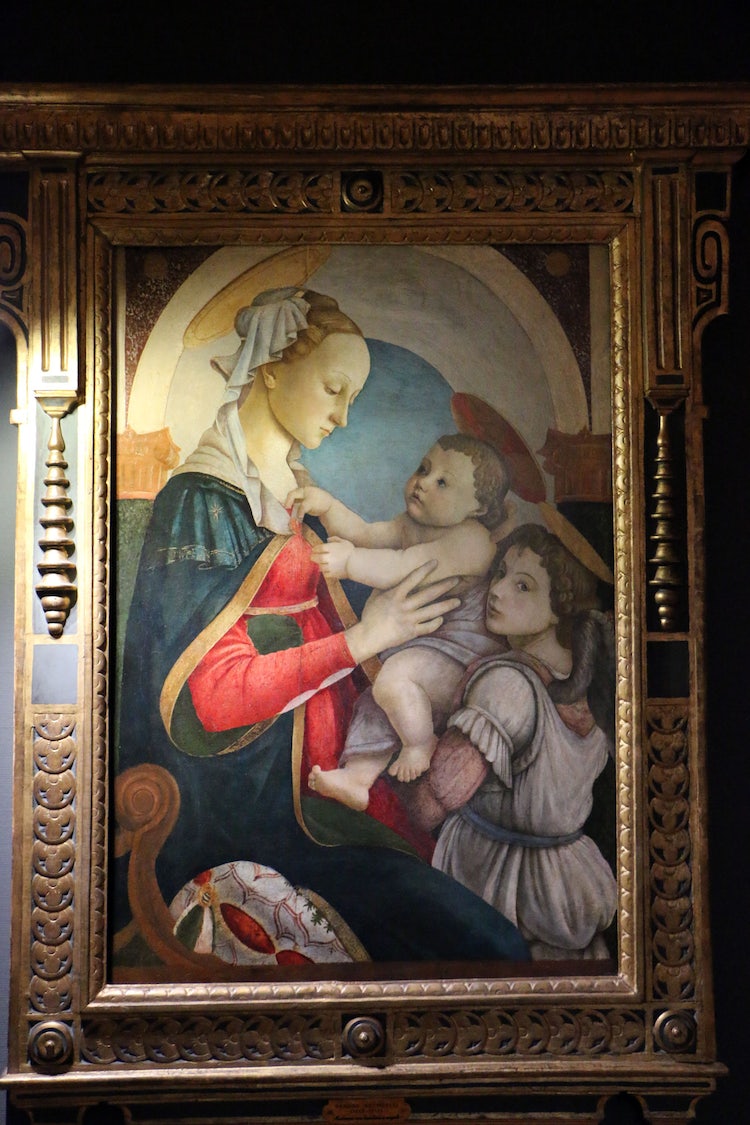 The Madonna with Child and Angel by Sandro Botticelli found midway down the art gallery is one of the most important of the collection and is clearly inspired by Botticelli's master, Filippo Lippi's Madonna and Child found at the Uffizi Gallery. 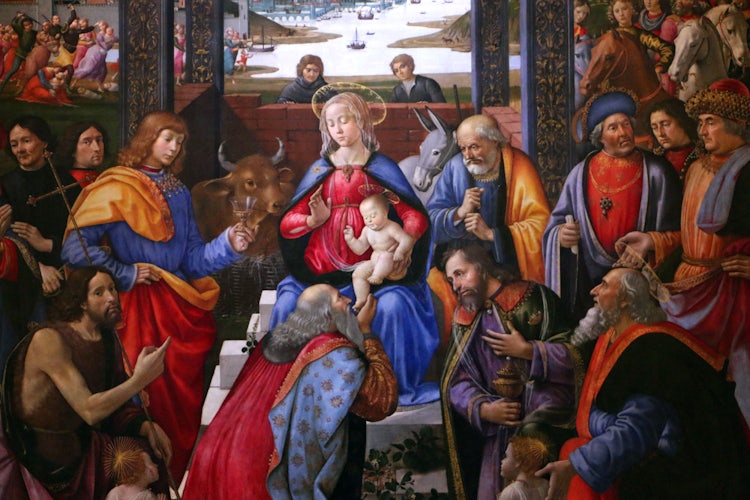 The Adoration of the Magi by Domenico Ghirlandaio, David Ghirlandaio and Bartolomeo di Giovanni at the end of the hall is one of the most beautiful masterpieces housed at the Innocenti museum. Its colors and rich details make it hard to believe it is over 500 years old. Located within the last room at the end of the gallery, you'll find this and the works of Piero di Cosimo and Neri di Bicci, considered by many as the most prestigious works of art within the museum. 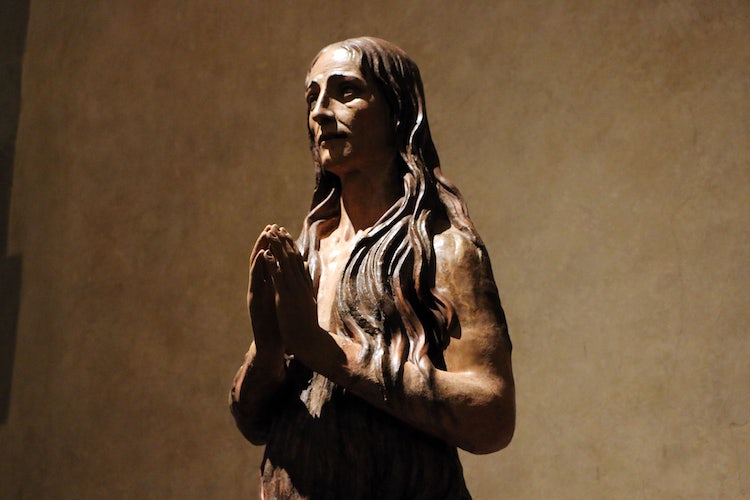 This, however, does not mean you should ignore any of the other artworks. The new museum was the occasion to restore many of the architectural features as well as artwork, many through direct sponsorship of "adopt an artwork" set up by the Istitute. Some works were not on display at all, including a beautiful wooden crucifix by a Florentine sculptor and the marble sculpture of St. John the Baptist at the foot of the stairs and which you can now admire.

As part of the restorations, the Della Robbia swaddled babies from the facade were taken down and restored by the Opificio delle Pietre Dure. They have not yet been put back in place, since the institute thought to offer visitors to the museum a very special opportunity: from now and until fall 2016, you can admire them up close within a room of the art gallery before they get placed back in their original positions high above the ground on the loggia in Piazza SS Annunziata. So make sure to visit the museum soon! 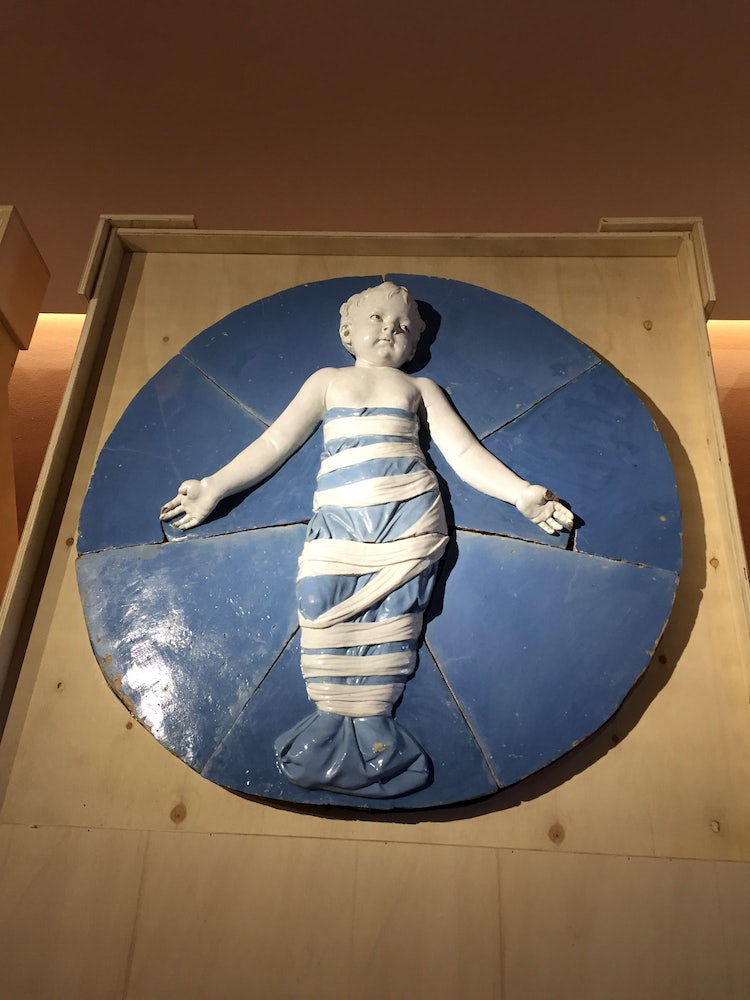 The Verone Cafe and terrace are open during the same hours. You do not need to pay entry ticket to the museum in order to enter the cafe.

Reduced tickets are available for anyone over 65 years old, for children between 12 and 18 years old and for groups with at least 15 people.