Temporary closure.
The Church and the Museum of Orsanmichele are temporarily closed. The reopening is scheduled for December 23, 2019.

Orsanmichele is a rather long name for a church, comprised of three different words all compressed into one. First documented in the year 895, it stood as an oratory in the monastery St. Michael (San Michele). The construction was surrounded by a vegetable garden (orto) belonging to the Benedictine monastery.

It is speculated that in Roman times a temple on this spot was dedicated to the worship of Isis, the Egyptian goddess of fertility. She was worshiped by the Greeks & the Romans who believed her to be the supreme deity who created the world.

Thus the name, a bit modified over the years, became known as: Or - San - Michele.

The austre external portion of the church shows that it is set on three floors, much like an office building, and it is a mix of simple walls in gray stone, intricate Gothic arches and windows, outdoor nichè with various sculptures and, even if you look for it, you won't find a regal formal “front” door. The entrance to the church is around the corner in the back. 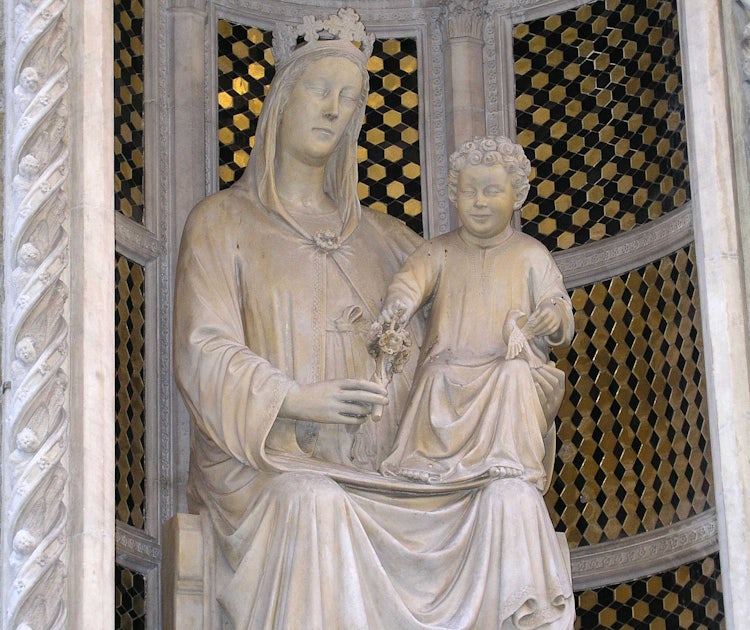 The original structure was destroyed in 1239 and around 1290 Arnolfo di Cambia was hired to build a loggia for the market. This building, made of wood, was again severely damaged in a fire and rebuilt again in 1336 as a market and grain storage area, on commission of the Silk guild (union of silk workers). As you wander around the square floorpan, look up to the frescoed arches and you will notice large metal rings embedded in the ceiling, these were used to load and unload the heavy blocks of grain.

Two of the columns on the right hand side are actually hollow and were used to move the grain between floors; the slots through which the grain passed are still visible. 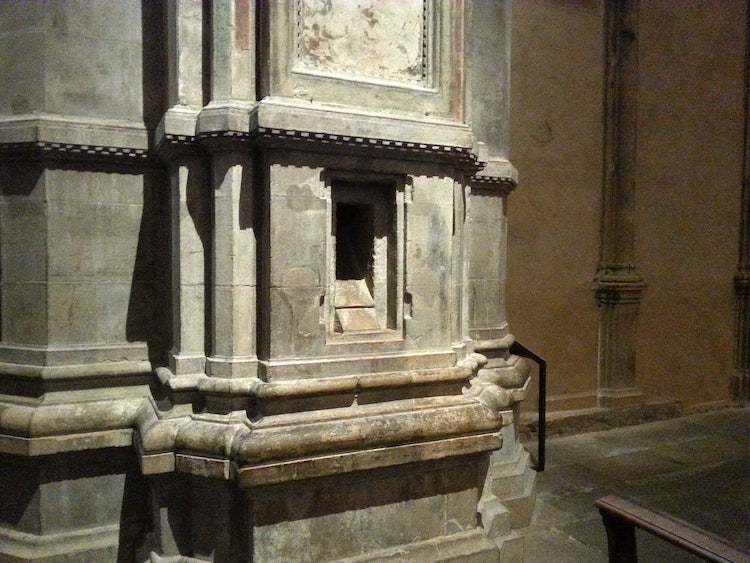 The architecture of the loggia was characterized by large arched openings for the market area where wheat, straw and grain were commerced. The second floor was devoted to offices, while the third floor housed one of the city's municipal grain storehouses, maintained to withstand famine or siege. 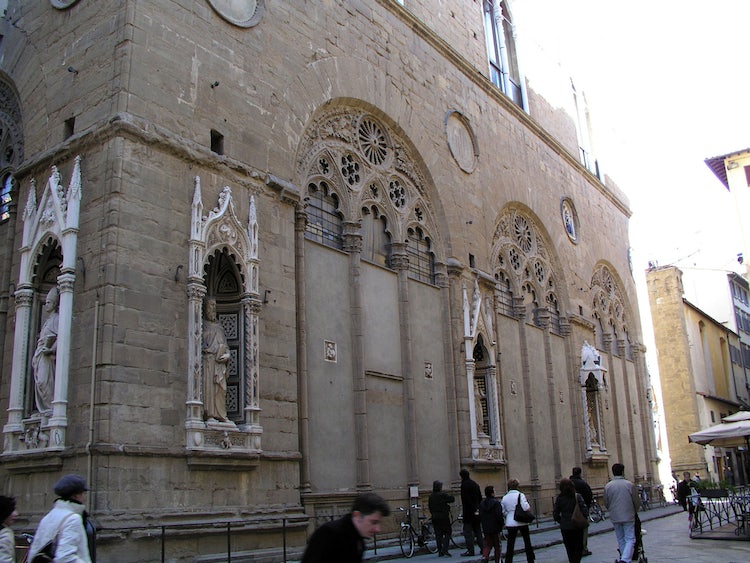 Why did it become a church?

How is it that a grain storage area transformed into a religious house of worship? Within the original structure of the loggia, one of the columns held the image of the Blessed Mother (in Italian: Madonna), which was accredited with several miraculous events. The image was damaged during the fire in the 1200’s - and Bernardo Daddi was commissioned to paint a new image: the "Madonna delle Grazie”.

Over the course of the years, pilgrims poured into the loggia to visit and pray in front of the Madonna and even with the “new & improved” image, there were still even more miracles credited to the fresco especially during the plague of 1348.

At this point, with the steady stream of new worshippers, the loggia could no longer be regarded as a suitable place for a market; it was transformed into a church. 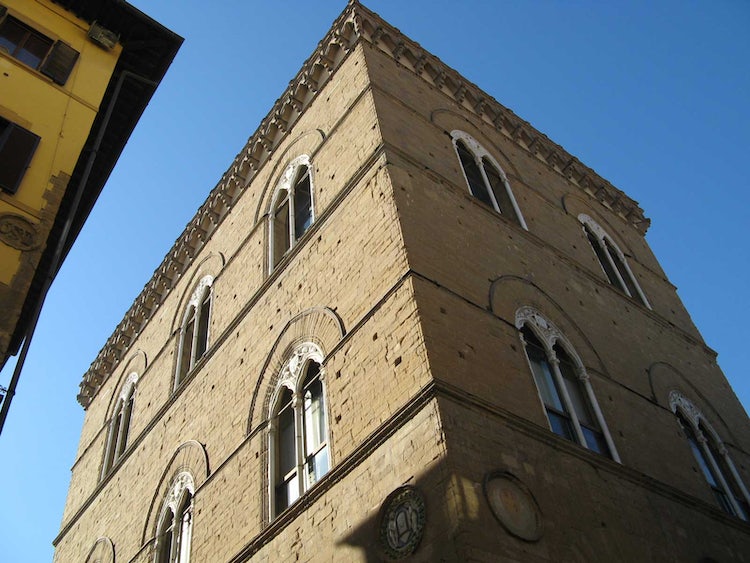 It is a common fact that most churches are noted for their particular and beautiful architecture, and this church is no exception. However, it doesn't uphold the same canons which were well established in church-architecture as seen in other examples throughout Tuscany. In fact, this building stands out a bit as you take a stroll between the government building at Piazza Signoria and the spiritual heart of the city and the Duomo

it was, and still demonstrates, a mix of characteristics of a civic building that has been turned into a religious building.

In 1339 it was decided that each of the major guilds (unions representing various arts and labors in Florence) should provide a statue of their respective patron saint to decorate the exterior of the Orsanmichele Church. By (happy) coincidence, nothing was completed until the Renaissance was in full swing in the 15th century, so the commissions were executed by artists of calibre of Vercocchio, Ghiberti, Donatello, and Luca della Robbia. Most of the niches for the saints are now empty or filled with copies. In the Museo di Orsanmichele, in the upper two stories of this building, you can see many of the sculptures. You can access the museum by the Loggia della Lana, the building directly in front of the church entrance. 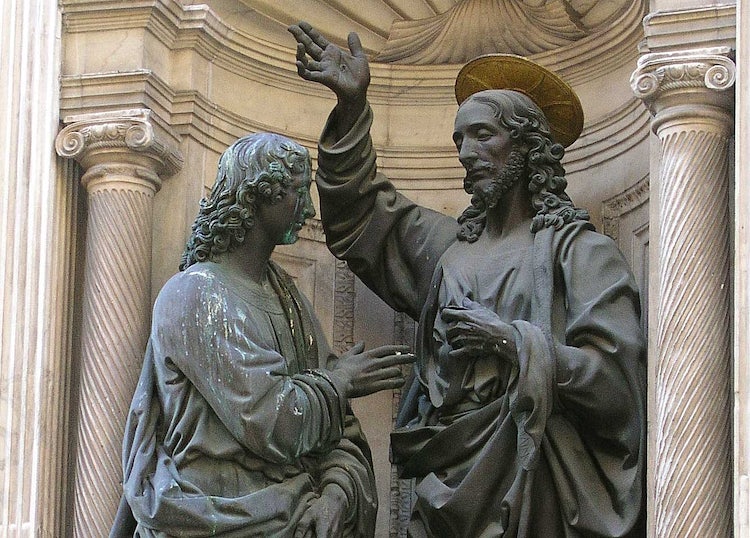 Take a Look Inside

The interior of Orsanmichele presents a rather gloomy atmosphere. There are patchy traces of frescoes on the walls; these, like the statues outside, depict the patron saints of the various guilds. The central feature, however, is the tabernacle (1348-59) by Orcagna, which frames the exquisite painting of miracles by Bernardo Daddi. 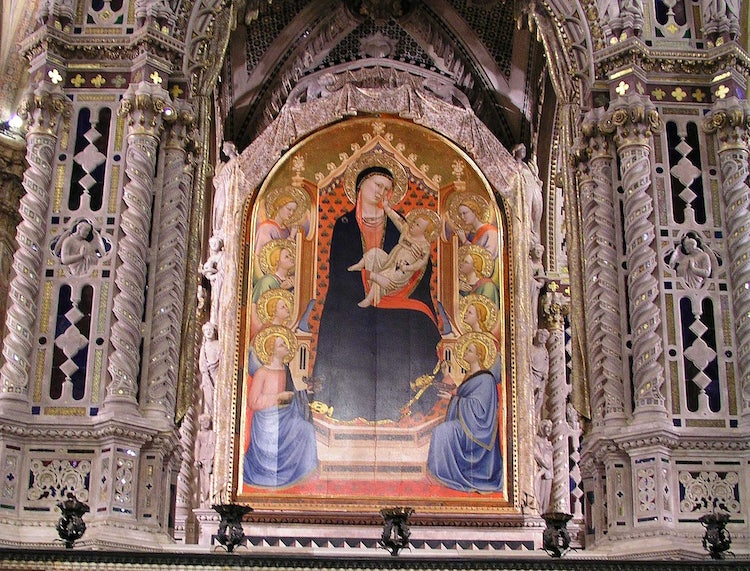 To appreciate the architecture of Orsanmichele, visit the museum: here you can admire the superb vaulting and brickwork and get a true impression of the immense size of the building. The views are also superb, not only of the Florence skyline, but of a wide range of statues and artistic styles of the saints that once decorated the external niches. Especially noteworthy is the composition "Four Crowned Martyers" by Nanni di Banco (1415), the movements are so realistic it seems as if you can participate in their conversation. 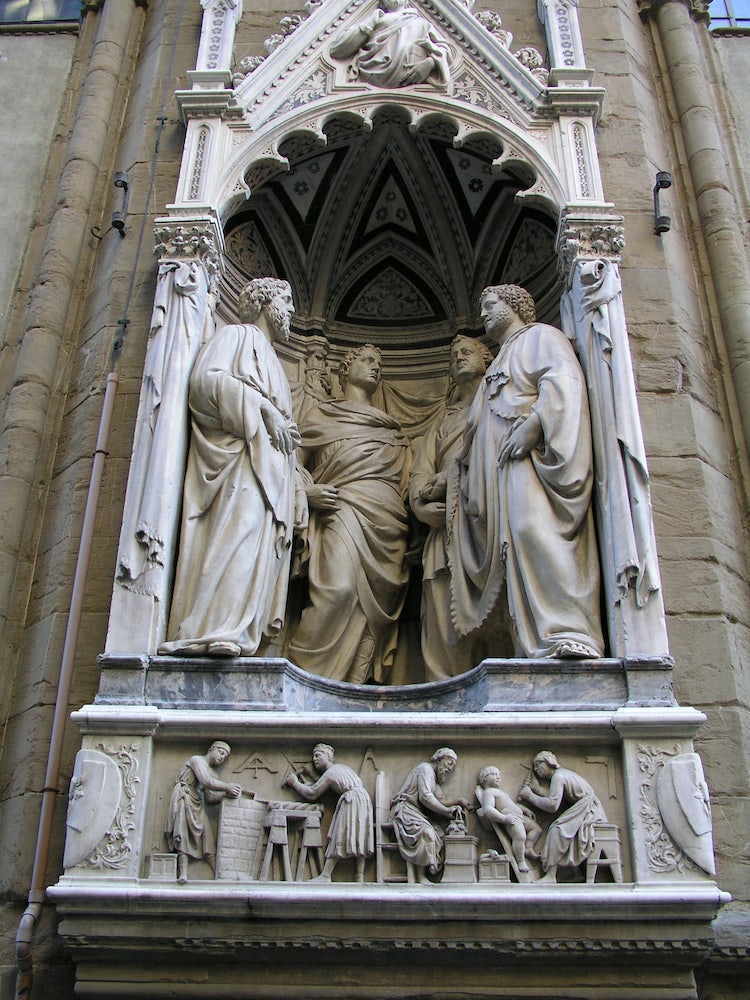 View more pics of the Church of Orsanmichele! »

Address: Via Arte della Lana, corner with Via Calzaiouli, 50122 Firenze

Opening hours: Temporary closure.
The Church and the Museum of Orsanmichele are temporarily closed. The reopening is scheduled for December 23, 2019.