The Last Supper in Santo Spirito

the Gothic wing of Augustine convent

Almost every weekend Santo Spirito Square offers a different event to enjoy in this lively Florentine suburb, full of workshops, food festivals or antic fairs. A few steps away from the facade of the Church you may visit one of the antic hidden gems of Florence: the Cenacolo of Santo Spirito. 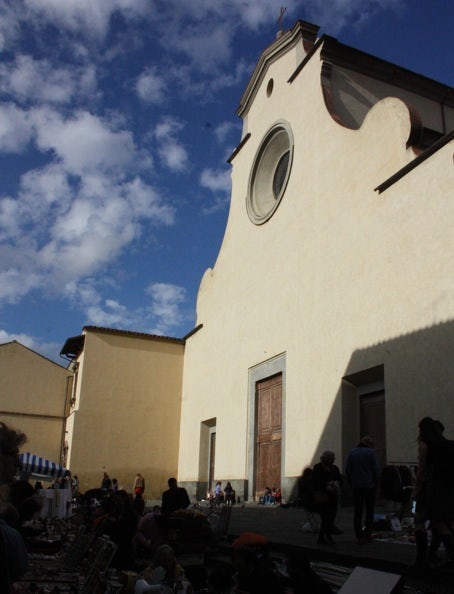 The refectory of Santo Spirito is the only surviving gothic-style wing of the ancient Augustine convent built around the 1350s. The monastic complex was entirely transformed during the Renaissance, when Filippo Brunelleschi started the reconstruction of the Church of Saint Spirit in 1444.

Only the Cenacolo (refectory) preserves its original architecture featuring trusses and two-lighted windows. Florentine patrons, the Cambi’s, covered the expenses for the decoration of the eastern wall depicting a monumental Crucifixion and Last Supper. The commission was assigned between 1360 and 1365 to one of the greatest late gothic masters: Andrea Orcagna, who was most likely helped by his brother Nardo di Cione. 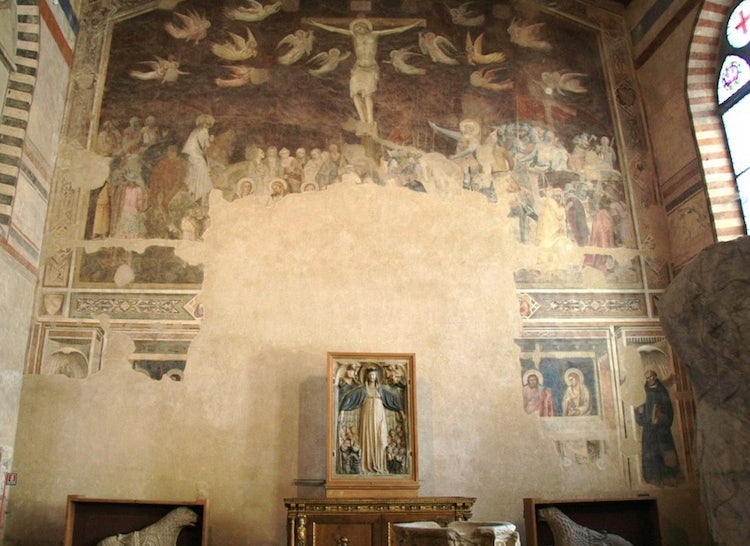 The large wall features the Crucifixion with a multitude of angels sorrounding the cross, portrayed on a dark background. One of the most remarkable aspects is the attention to details in each armour, head coverings, gestures and typical Florentine medieval costumes. Remarkable is the brave gesture of Longinus, the roman soldier, located to the right of Jesus. The centurion was present at the Crucifixion, and testified, "In truth this man was son of God”. 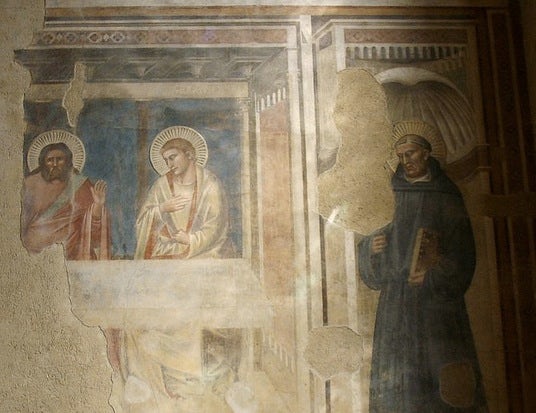 Search out the Details

In the lowest section of the fresco one can see only a few fragments of the Last Supper, alluding to the mystery of the death and resurrection of Christ renewed through the Eucharist. The busts of the evangelists and prophets alternate with the Cambi’s crest along the frieze framing the scene. 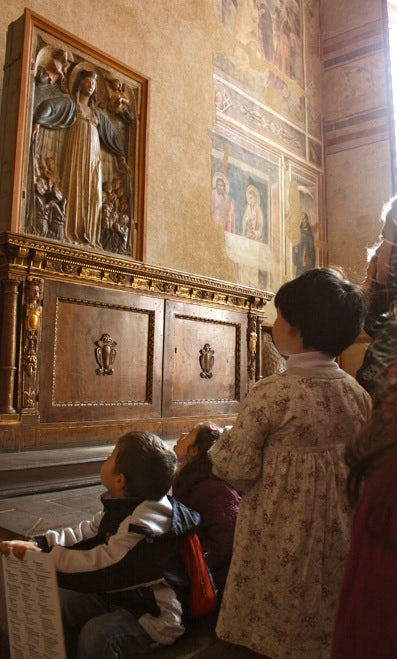 The lower register, almost completely destroyed, shows Christ establishing the Eucharist sacrament with the twelve apostles, a bishop saint and an Augustinian saint at either end. Only two of the Apostles are partially conserved, as well as the Augustinian friar on the right side, presumably identified as Saint Augustine Novello.

In the XIX century the monastic orders were suppressed and the structure underwent a period of abandon. The Cenacolo was even used as a shelter for trams, leading to the complete loss of most part of the original decoration. The refectory was later on used as a studio by sculptor Raffaello Romanelli, before the building and decorations were finally restored between 1938 and 1944.

Today the museum houses a precious collection of gothic sculptures, paintings, decorative artworks and antique pieces of furniture donated to the City Council by collector and antiquarian Salvatore Romano.