The Last Supper at Convitto della Calza in Florence

an emotional scene at the table

Right by the ancient Florentine Gate Porta Romana there is a charming hospitality center which offers medieval charm and modern facilities to host congresses and prestigious events. It is hard to believe that a conference center houses an authentic Renaissance masterpiece which is one of the most amazing (and least known) Florentine “cenacoli”, a Last Supper fresco painting. 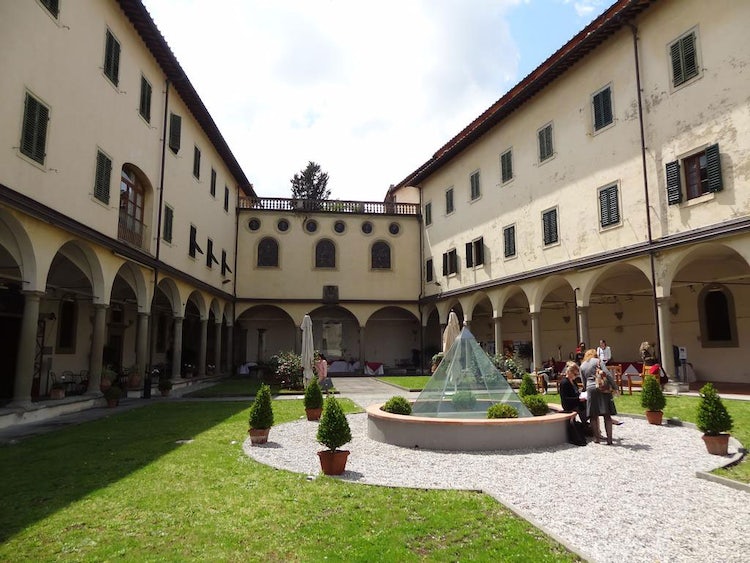 The  Convitto della Calza (literally meaning sock) building owes its name to the long white hood worn over the left shoulder by the Jesuati friars (Apostolic Clerics of Saint Jerome) who occupied the convent in 1529. In the 1300's the convent used to be a hospital run by the Dames of Malta, members of the Sovereign Military Hospitaller Order of St. John of Jerusalem and of Malta.

Never Had the Time to Enjoy

The Dames commissioned Franciabigio to paint the Last Supper fresco in 1514, but then sadly had to leave the hospital during the 1529 siege of Florence.  They were replaced by Jesuati friars (not Jesuits) who changed the dedication of the church from Hospital of Saint John the Baptist (by the Gate of San Pier Gattolino) to San Giusto. The hospital was then used as a charitable hospital for children, ecclesiastic boarding-house and eventually as a seminary.

They Left Their Mark

The finely restaured 13th century building now guarantees an extraordinary location for researchers, scholars and visitors who wish to enjoy a peaceful place and contemplate art treasures. The true hidden gem kept inside is the Cenacolo by Franciabigio, a last supper painting which is still preserved in the ancient refectory.

Mother Superior Antonia de’ Medici entrusted Francesco di Cristofano, called Franciabigio (1482-1525) to portray thespecific scene, during the Last Supper, immediately after the words by Jesus: “Truly I tell you, one of you will betray me.” Franciabigio thus depicts a deep sadness in Jesus’ eyes, Judas’ sudden movement and the confused expressions of the Apostles around the table. One can notice each reaction and recognize each Apostle name painted along the strip which runs above their heads. The painter added here the date A(nno) S(alutis) MDXIIII (A.D. 1514) and his signature through a twisted shortened monogram (FRAC). If you observe the painted floor you can even distinguish the name of the Mother Superior Antonia (SVORA AN), marked on the low left side under the table, between the second and third Apostle. 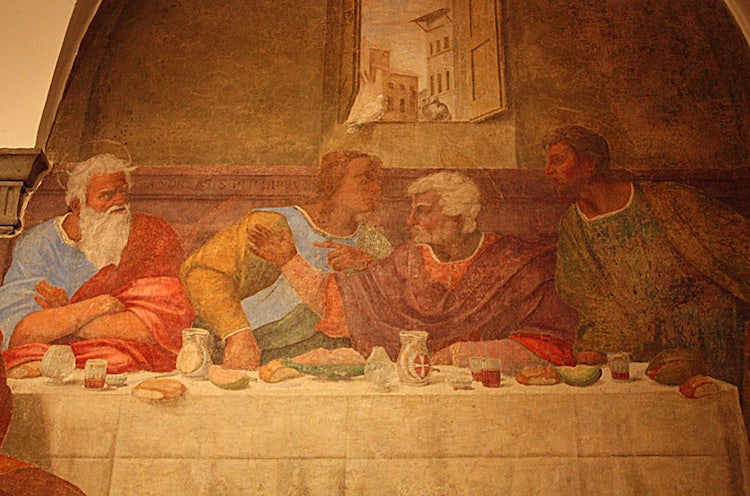 It's the Details that Catch your Attention

Let your eye freely explore each magnificient detail, painted along the fine linen tablecloth: you will find ceramic jugs, rolls, glasses with red wine, sliced water melon. Several jugs feature the typical Medici coat-of-arms (the one with the red spheres) referring to Mother Superior Antonia and the Red Cross of the Order of Knights of Malta whom the nuns (Dames) originally belonged. 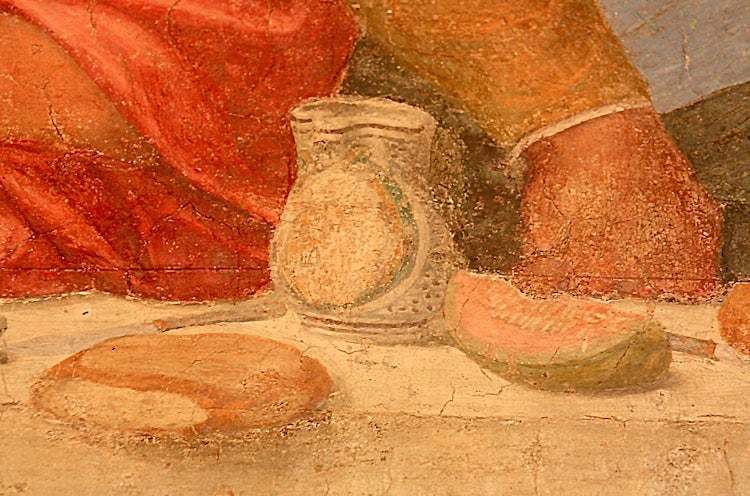 Giorgio Vasari describes in his “Vite” (Lifes of the Most Excellent Painters, Sculptors and Architects) how Franciabigio “was very keen on studies of perspective” and human anatomy, as you can tell by the accurate position of the wooden shutters painted along the wall. A fascinating contrast is given by the dark green wall and the light of the crystal clear sky in the background, where the painter depicted the old Florentine townwalls (the destroyed gate of San Pier Gattolino). 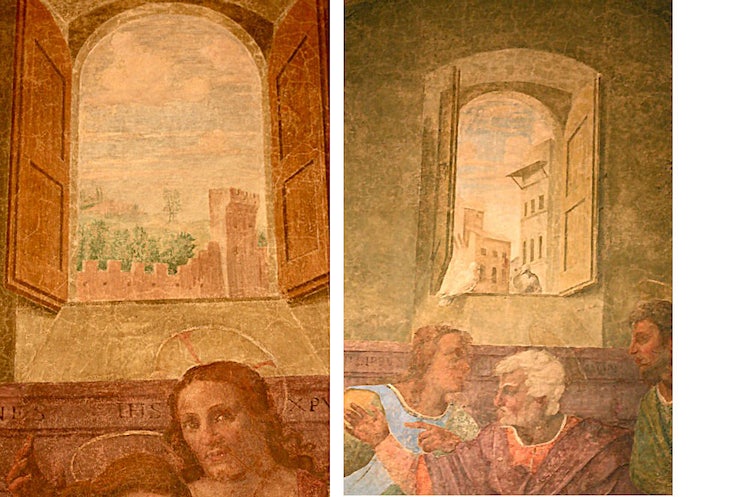 For the Jubilee in 2000 the wallpainting was completely restored and brought back to its original splendor.

The Cenacolo is open to the public for free when the refectory is not booked for private events. Before your visit make sure to contact the Cenacolo to verify its accessibility: 055/222287