On a daily basis, the service at 6pm is in Latin and Gregorian chant, while Sundays it is at 5.30pm.

Built between the 11th and 13th century, the exterior of the Church of San Miniato al Monte (St. Minias on the Mountain) is decorated with green and white marble in geometric patterns similar to the facades of Santa Croce and Santa Maria Novella. A golden mosaic of Christ Pantocrator from the 13th century decorates the facade over a central window.

With your back to the front of the church one can enjoy an impressive view of Florence even higher up than the beautiful Piazzale Michelangelo. From this lofty height, one can see from the Duomo and Palazzo Vecchio to the last standing parts of the medieval walls that once surrounded Florence. 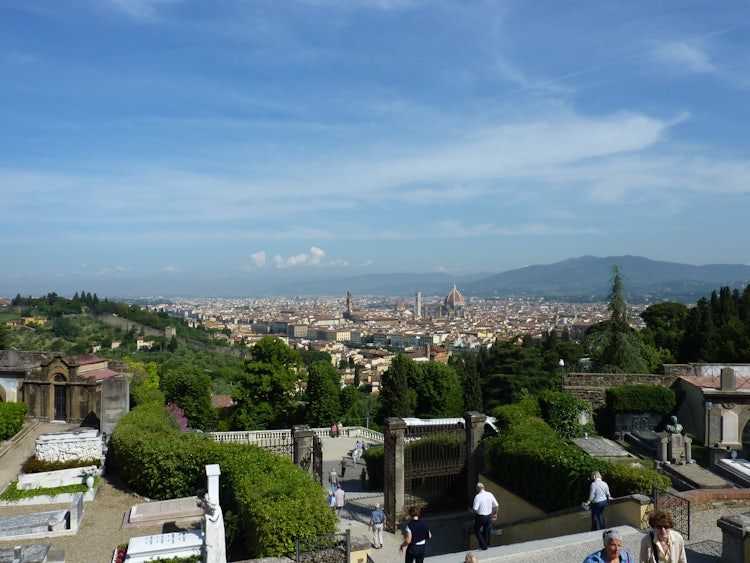 Going into the church, one finds that the interior is Romanesque, with three naves and an elevated presbytery and a crypt. Pay particular attention to the marble pavement in the central aisle dating back to the 13th century. At the end is the beautiful Cappella del Crocefisso by Michelozzo (1448), and behind it is the crypt, whose vaults are decorated with frescoes by Taddeo Gaddi. The crypt supposedly contains the mortal remains of the saint, San Miniato or St. Minias. Above the crypt, the elevated presbytery is enclosed by a marble column fence and contains an impressive 14th century wood choir. On the half round apse over the main altar is a gorgeous golden mosaic of Christ Pantocrator from 1297, the same subject as the one on the facade.

The whole complex is surrounded by defensive walls, originally built hastily by Michelangelo during the siege and in 1553 expanded into a true fortress (fortezza) by Cosimo I de' Medici. The walls now enclose a large ornate monumental cemetery, the Cemetery of the Porte Sante, laid out in 1848 around the church. Buried there are Carlo Collodi (Lorenzini), creator of Pinocchio, politician Giovanni Spadolini, painter Pietro Annigoni, film producer Mario Cecchi Gori, soprano Marietta Piccolomini, the family tomb of the Vespucci, painter Ottone Rosai, stylist Enrico Coveri, Pellegrino Artusi, the Fratelli Alinari and Giovanni Meyer, founder of the Meyer Children's Hospital. John Temple Leader, English politician, also has his final resting place there.

I recommend, if you have the time, to go around the corner of the basilica and visit the cemetery at the back and wander: there are gorgeous statues and chapels to be discovered (hours: weekdays 8am-5pm, holidays and Sundays 8am-1pm). 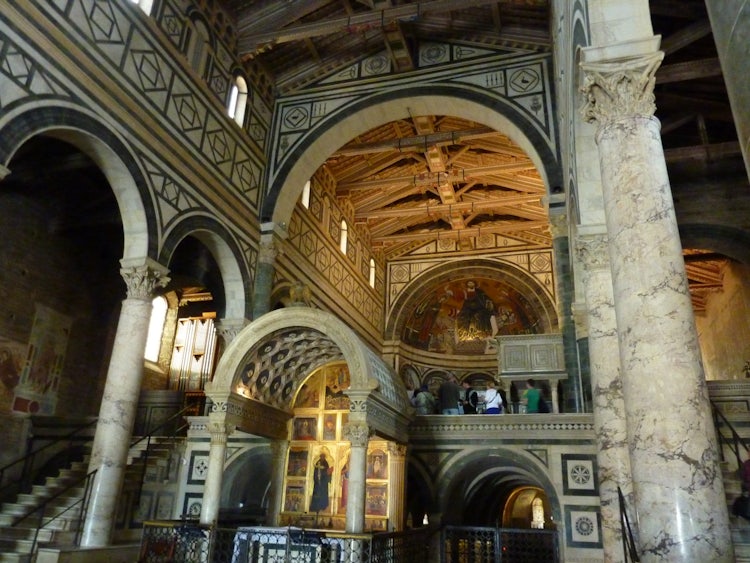 Since the church of San Miniato is located just outside the city walls it takes a bit of planning to reach. It is easily accessible by foot, car, bike (for those who like to climb) and by bus. If you like the idea of a panoramic hike, taking in the green hills that surround Florence and the spectacular views of the skyline, then your best option is to walk up to Piazzale Michelangelo. You can follow several paths from either the Piazzetta of San Miniato or the path behind the Torre di San Niccolò. Once you are at the panoramic terrace, climb the remaining steps to the top of Via delle Porte Sante to arrive at the door of the church.

If you have a car, just follow the signs for Piazzale Michelangiolo and you will find parking either in front of the church or on the street that leads up to the church. Be forewarned it is paid parking from 8am-8pm. Cyclists (and walkers) can follow the same path as the cars, there is a well-kept sidewalk.

You can also catch the ATAF city bus #12 or #13 from the center to get to the church, there is a stop right in front of the stairs that lead up to the church.

» View more photos of the Church of San Miniato »