The Church of Santa Trinita in Florence

Just Outside the Antique City Walls 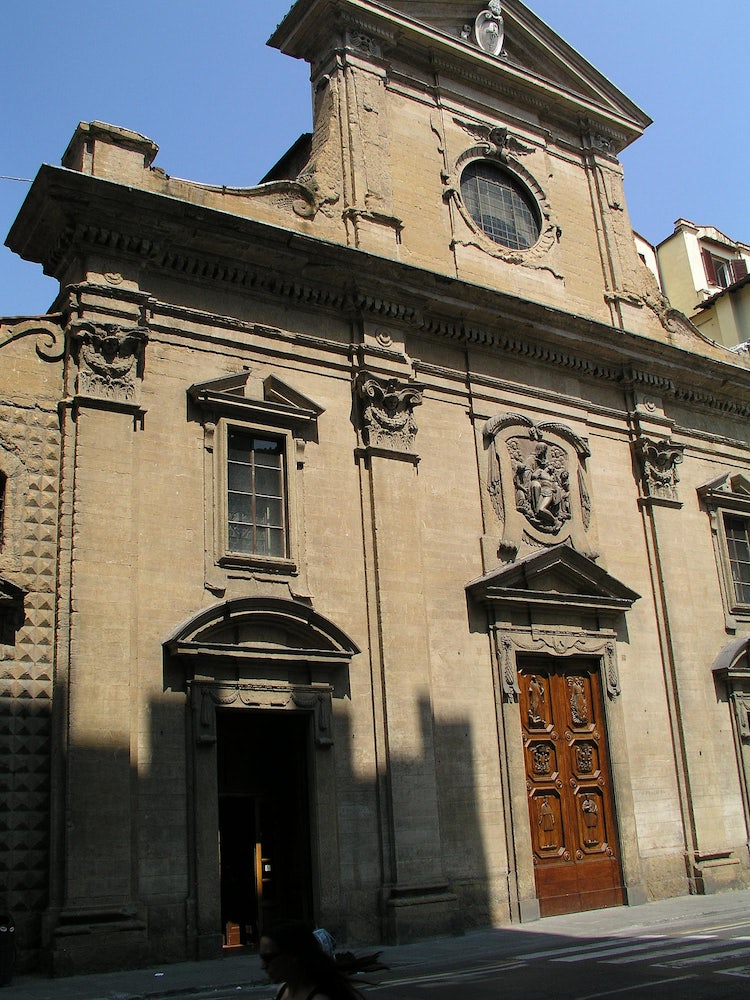 The St. Trinity Church, or Church of Santa Trinità, overlooks the square of the same name and can easily be reached by walking down via de' Tornabuoni, one of the most elegant streets in Florence's city center, down towards the Arno River. A few steps away stands the Santa Trinita bridge over the Arno.

Commissioned by Vallombrosan Benedictine monks, the Santa Trinita Church was founded in the middle of the 11th century. Originally located just off the ancient city walls, the church was incorporated into the city center when the second walls were built in 1172-1173.

Santa Trinita was originally built in a simple Romanesque style respecting the austerity of the Vallombrosan order, but later was enlarged and restored following a Gothic style. The restoration works started at the beginning of the 1300s and went on for the entire century after.

The ancient medieval building is still partially visible inside as you look at the "counter-facade" or back wall of the church's front since it was just covered from the outside. The current facade was designed in 1500 by Bernardo Buontalenti, one of the main Mannierist artists in Tuscany, and displays scuplteres by Giovanni Caccini.

The Church of Santa Trinita belonged to the Strozzi family and then passed to the Medici family.

In 1400 many important painters worked for the church (the Sassetti Chapel by Ghirlandaio was completed between 1483-1486). In 1500 and after the Counter-Reformation (1564), important structural works by Buonatalenti started. Buontalenti worked on the facade and on the Main Chapel (Cappella Maggiore).

A Tour of the Church Interior

See Sidebar for Information on how to visit Santa Trinità

The Church of Santa Trinita is extremely rich in artworks, most of them displayed within its chapels. The Sasseti chapel is the most important but here is a list of the major work starting on the left side as you enter and visiting the church moving on clockwise:

Dedicated to Giuliano Davanzati. Inside the chapel is the Sarcofago del buon pastore (Sarcophagus of the Good Shepherd) by Rossellino (1444) who used an actual Roman sarcophagus to work on. On it, a shepherd is depicted with lambs portrayed in a very dour way; in fact, the shepherd seems to be a monk.
In the chapel, a beautiful Crowned Virgin by Bicci di Lorenzo is displayed.
The chapel also has a fresco portraying Saint John Gualberto (founder of the Vallombrosan Order) by Neri di Bicci (mid 1400) and was moved here from the Church of San Pancrazio. The fresco reminds one of works by Masaccio, but the figures lack movement. There is also an Annunciation by Neri di Bicci. 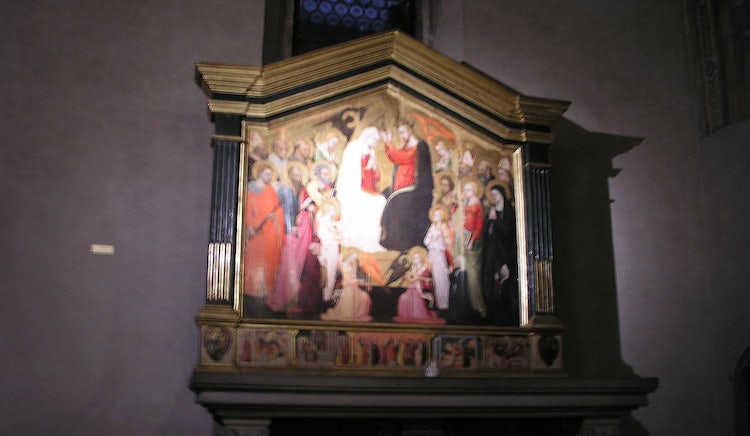 The chapel houses the fresco of the Holy Bishop by Alessio Baldovinetti. In the chapel a wooden statue (almost full size) depicts Magdalene by Desiderio da Settignano that looks very similar to the Magdalene by Donatello found inside the Opera del Duomo in Florence. 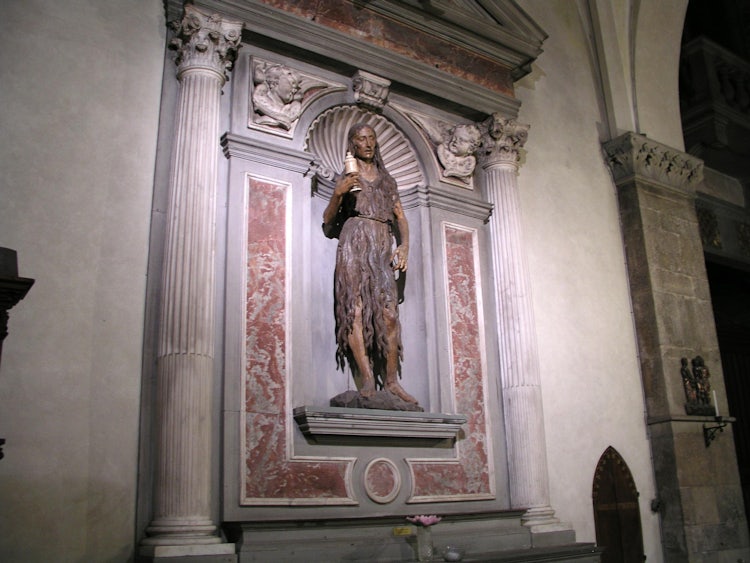 This chapel commemorates the founder of the Vallombrosan Order whose relics are preserved here. It was built as a gift to the church by the monks, and it was designed and created to look like a real yet small casket. The frescoes here were painted by Passignano at the end of the 1500s.

These commemorate Benozzo Federighi, Bishop of Fiesole who died in 1450; the monument was created by Luca della Robbia in 1454. The monument's frame is made of majolica using the "opus sectile" technique: every oval is made of small tiles that create a mosaic (it's one of the first examples of the use of majolica for funerary monuments).

In 1500, the original chancel was taken apart by Buonatalenti, one part was completely removed while another was just moved back. The altar houses a beautiful polyptych: S. Anthony, S. Michael, S. Francis and S. Julian and in the center God and Jesus (in smaller proportion).

The chapel houses a fresco depicting a Blessing Christ by Bicci di Lorenzo. Inside, a crucifix also stands. 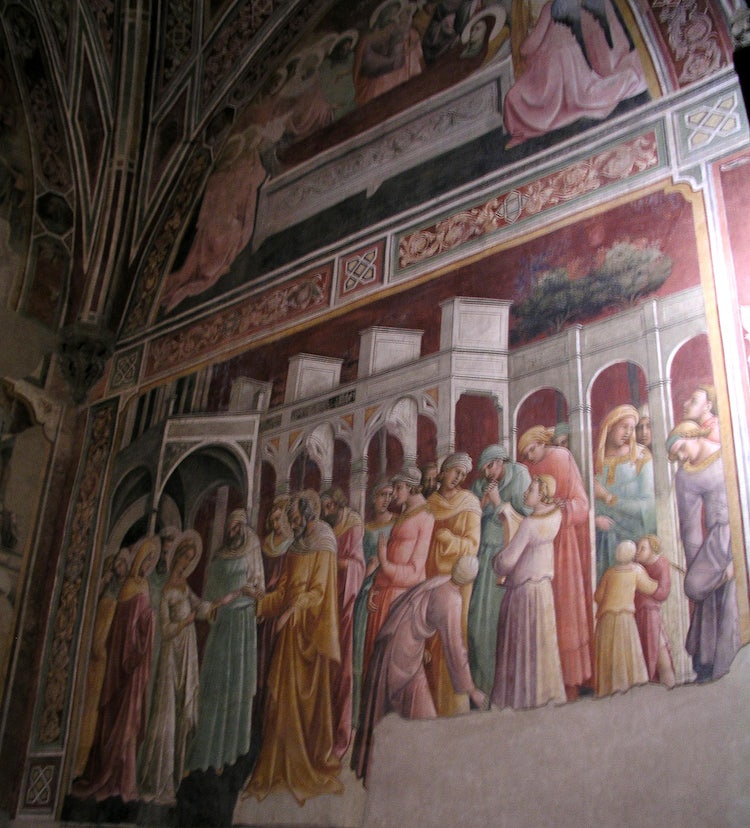 This chapel is one of the most beautiful and rich chapels in the church. In the center is a painting depicting the birth of Jesus "The Adoration by the Shepherds". It dates back to 1585 and is signed by Ghirlandaio, as well as all of the frescoes in the chapel. The members of the Sassetti family who commissioned the work are themselves portrayed within the frescoes, as in Masaccio's Trinita.
The frescoes depicting "Stories of St. Francis" are really beautiful.  These date back to the same period (1500s). In the middle, a miracle attributed to St. Francis is portrayed: it depicts a child that fell down from a window in the Palazzo Spini ("revived child"), the palace right in front of Santa Trinita, an event that horrified the population. Because it happened in Piazza Santa Trinita, the fresco shows how the square looked like at that time (the church in the frescoe does not have the Romanesque facade yet). 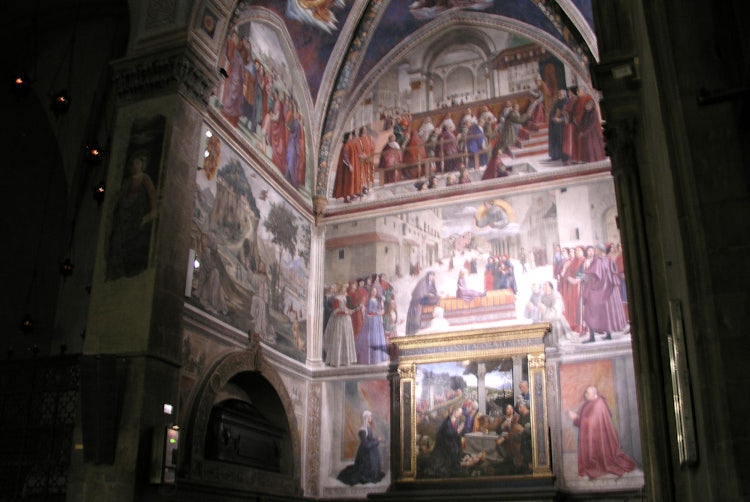 The sacristy entrance stands to the right of the Sassetti Chapel. Originally it was the Strozzi Chapel, designed by Lorenzo Ghiberti and Filippo Brunelleschi. On the altar used to stand the , but this is now displayed at the Uffizi Gallery. Onofrio Strozzi wanted a monument to commemorate Saint Onofrio and Saint Nicholas, which was made by Michelozzo. The chapel also houses also a Pietà by Barbieri.

The last chapel by the entrance on the right is enriched by a valuable cycle of frescoes, Life of the Virgin, a work by Lorenzo Monaco (1420-25). Signed by the same artist is also the beautiful wooden painting of the Annunciation in the same chapel.

We hope you enjoy visiting the Church of Santa Trinita on your own trip to Florence!