The Marino Marini Museum in Florence

Past and Present Together Under One Roof

The Marino Marini Museum located in the ex-church of San Pancrazio in Florence, Italy is a fantastic surprise; combining classic and contemporary/modern art all under one roof.

The architects responsible for showcasing the contemporary work of Marino Marini took the antique structure of the San Pancrazio church and, as the Italians would say, “sposa” (married) it to the concepts of space and light which created a sensorial “piacere” (pleasure). It is a unique interpretation of the ideal setting for both exhibits and perfectly complements the diversity that we find within the stone walls. 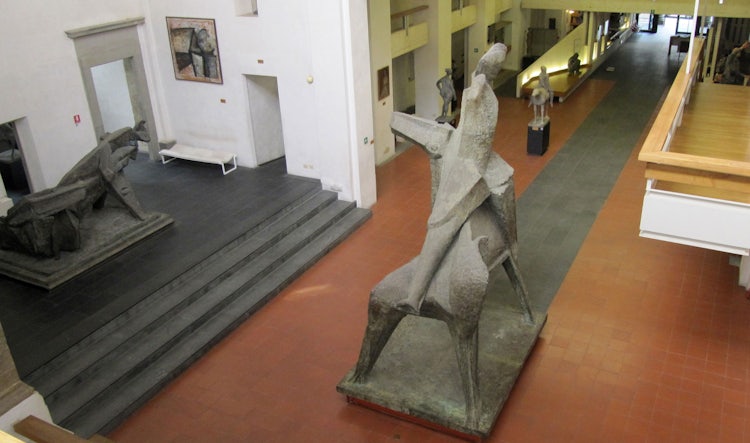 Go for the Art & Architecture

The unusual mix of styles within the museum will satisfy those with a penchant for only antique art and also those who prefer only contemporary art.

Without a doubt, the Marino Marini Museum is an opportunity to feel. You can start by feeling the space dedicated to the artwork. The museum is set on 4 levels, each offering an individual perspective which is not only interesting but necessary to fully appreciate the (sometimes) massive pieces in bronze and plaster.

Each level proposes a new point of view, a new opportunity to pull out the image, the contours and the hidden “modern day hero on a horse” a recurrent theme in the artist and sculptor Marino Marini’s artwork. 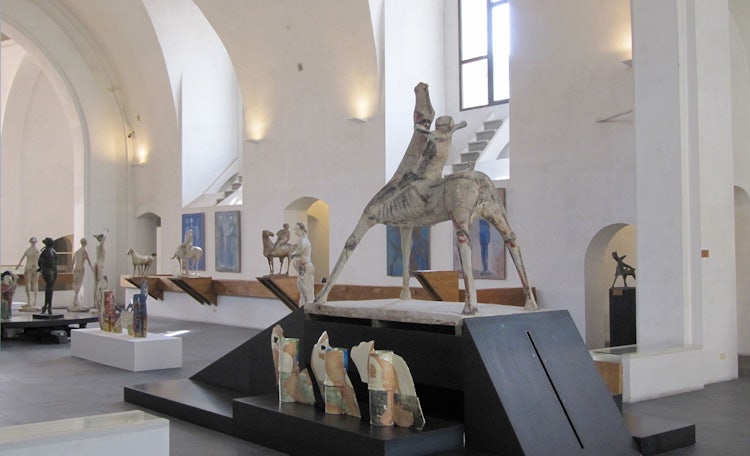 The innovative and modern interior design not only sets the stage for the work of this contemporary artist, but also manages to expose the original architecture of the church interior. From the towering heights of the ceiling to the curious restructuring of the crypt, a stroll through the museum allows for a double appreciation: the past and the present.

A Special Spot in Florence

Tucked away in a small corner between Santa Maria Novella and Palazzo Strozzi, it is most definitely a space you would have skipped right over if no one had pointed it out.

The origins of the church appear to date back to Charlemagne (Charles the Great) and its past has been touched by great artists such as Leon Battista Alberti and Neri di Bicci. Its more recent history, after it was deconsecrated, included activities like housing the city's lottery, a tribunal and even a tobacco factory before becoming the home to some of the important pieces by Marino Marini. 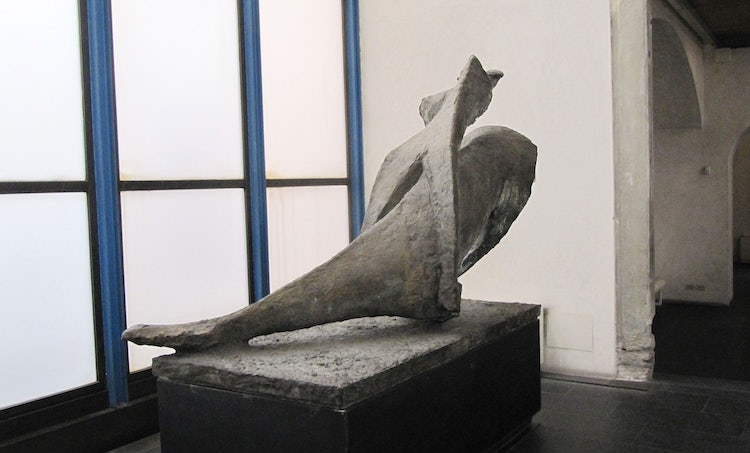 Though the structure is classified as a museum, within the walls of the ex-church stands the Sacellum of the Holy Sepulchre also known as the Rucellai Sepulchre. This corner of San Pancrazio, even if located inside the Museum, still belongs to the Curia of Florence (the church), and is considered a sacred site dedicated to worship. Thus making this half museum and half "church". 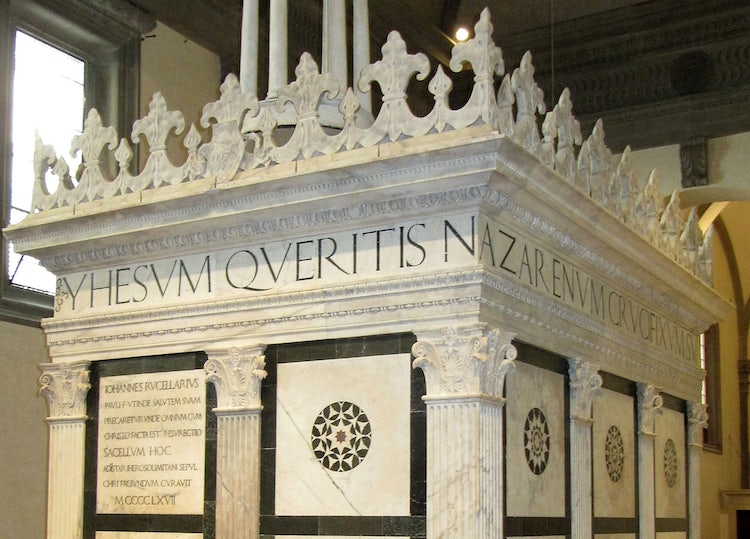 See Sidebar for Details on Opening hours and Entrance Fees

The sepulchre is only accessible through the museum, and it is open to the public during the opening hours of the museum, but you will still need to purchase a ticket to visit it. The interior of the sacellum is composed of a single burial chamber containing a marble slab placed against the southern wall. The exterior is decorated with 30 different marble inlay intarsia set inside framed squares and are inspired by vegetation such as laurel & oak leaves or flowers, while some depict geometrical forms such as the eight or six-pointed star.

Built quite rapidly, and completed in 1467 as stated on the inscription in Latin on the entrance door, the sacellum has always been considered by scholars as one of the many copies of the shrine in Jerusalem that were built in Western Europe during the Middle Ages and Renaissance period to recall the devotion of pilgrims returning from the Holy Land.* 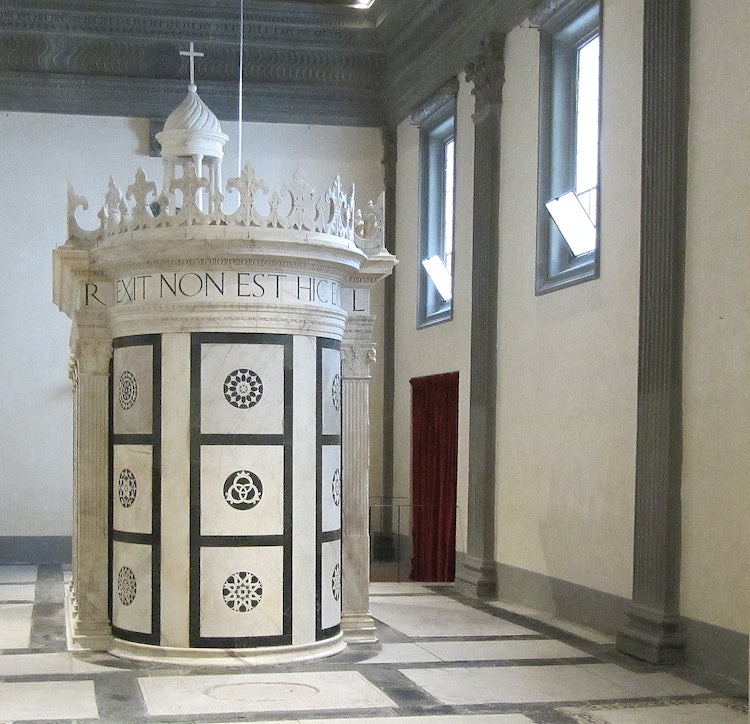 It is interesting to view how these two artists stand side by side, complementing one another even with hundreds of years in between them.

Marino Marini (1901-1980) style and themes goes back to the Etruscans for his inspiration; shapes and forms are used with a personal interpretation to communicate to the audience.

Leon Battista Alberti (1401-1472) uses the artists and architects who lived and worked prior to him and gives new life and dimension to the precise mathematical calculations thus creating his monuments and facades as tribute to those who came before him. 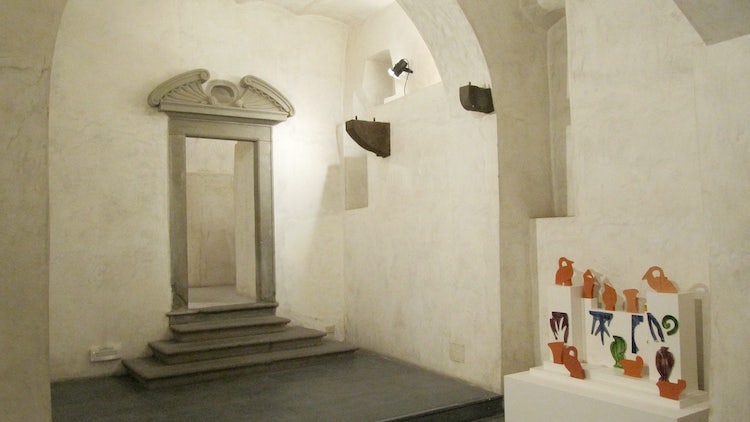 Marino Marini, born in Pistoia where you will find another museum dedicated to the artist with more of his works, spent time all around Europe before coming back to Italy to live his final years in Milan. He studied several different themes: equestrian, Pomonas (nudes), portraits, and circus figures all of which are represented in the museum.

The other artist present in the Museum is Leon Battista Alberti, and his work, the Rucellai Sepulchre, is a small funerary chapel. There is an excellent film inside the museum in two languages which highlights the details of the chapel and speaks of its revolutionary concepts (much like Marini’s work) in that time period. 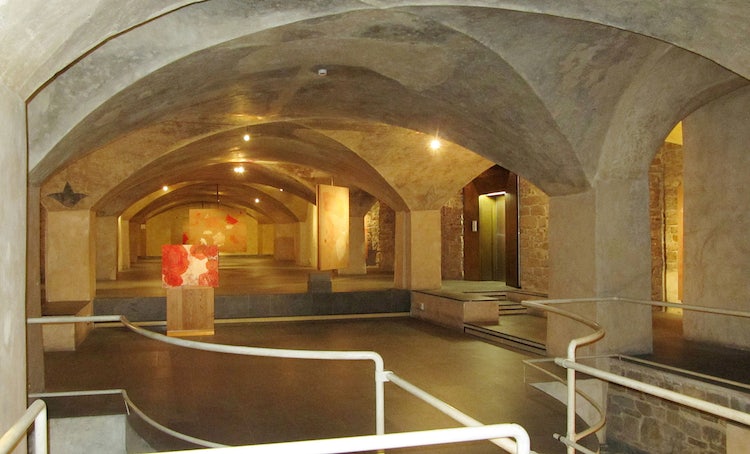 The museum frequently hosts exhibits in the crypt, where creative use of the space allows for educational activities, talks and special showings of young and up & coming artists, modern artists and with themes varying from sculpture, paintings, ceramics or clothing. Even when empty the crypt is a suggestive environment, with modern concepts used to exploit the space and architecture within.

Open Saturday-Sunday-Monday from 10 a.m. to 7 p.m.
Open other days of the week only upon reservations to groups or small family groups or schools.

The permanent collection is FREE, but temporary exhibitions and the Cappella Rucellai require a ticket.

The museum dedicated to the artist Marino...