Dante Alighieri, Inspiration for Romance or Passion even Today

7 places to find Dante in Florence

Born in the year 1265 in the city of Florence, Dante Alighieri has been long considered one of Italy’s first romantic figures and greatest poets. Through his work “Vita Nuove” and his epic poem “The Divine Comedy”, his strong feelings for Beatrice - "the love of his life and inspiration muse", as he defined her - sprang to life and changed literature as we know it today.

Any good Florentine will tell you that Dante was inspired by his unrequited love for Beatrice.

It probably needs to be said that the idea of romance and love, as it was known in the Middle Ages, has no parallel in today's time. Back then it was known as a “courtly love”, a medieval European literary concept that emphasized nobility and chivalry.

Therefore, an unrequited love like that of Dante is most definitely not the same as what we would call "romance" in today's times, but that feeling inside of love and passion for something or someone is similar to what today motivates us into action! So, we thought we would "rouse" you with a romantic and inspiring Dante-themed itinerary to guide you across Florence to explore! 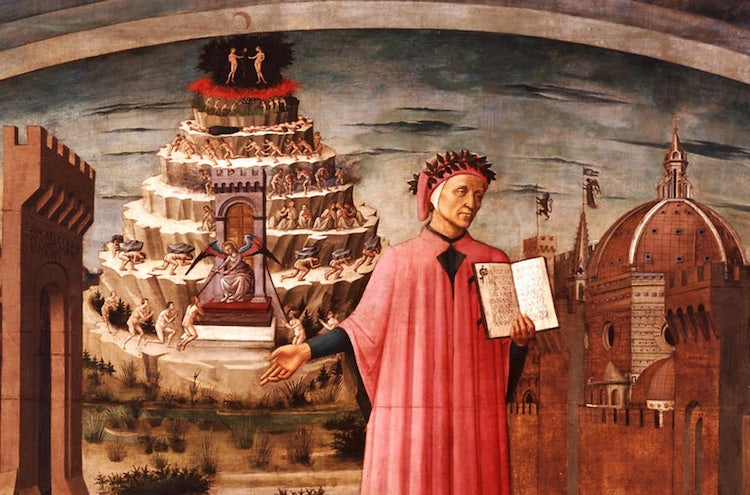 It all began at the tender age of 9

Dante’s "courtly" love affair started with a chance meeting at the age of nine, where he was immediately besotted with the young Beatrice. His feelings for her blossomed over the years and documented history tells us that his next "meeting" with her was nine years after the first! Just think about that: though they met only on three separate occasions in all of his lifetime, his love for her survived her marriage to another man, his marriage to another woman and her death in 1290 at the young age of 24.

These very brief encounters were to be the inspiration for his work “Vita Nuove”, a groundbreaking piece of literature: important for more than just its emotional content but also for its use of the Italian language and the new poetic structure of the prose. Through this poem, Dante claimed that his sighting of Beatrice "woke his sleeping heart" to love:

I felt awoken in my heart
a loving spirit that was sleeping;
and then I saw Love coming from far away
so glad, I could just recognize.

In search of Inspiration

While the face of Helen of Troy “launched a thousand ships”, the muse Beatrice helped Dante put ink to paper and write over 32,000 words in his epic poem “The Divine Comedy.” This poem has been long considered an epic masterpiece in the Italian language and poetic style, and it is here that Dante uses Beatrice as a "worthy soul" to guide him through "Paradise".

Want to help stoke your romantic side or search for inspiration?

We suggest that visiting a few places that hold the ghost of Dante while he resided in Florence may help you find your own muse for romance and passion. Here are 7 spots within the streets of Florence where Dante could have been found contemplating his love and muse and where we hope you will find inspiration, too!

If you are curious about getting a feel of the times when Dante was alive, then you will want to start at the museum dedicated to his childhood home with lots of information to help you imagine life in the Middle Ages.

Besides telling you about the “Somma Poeta”, Dante’s nickname, these three floors are divided into telling the story of politics, economics, and social aspects during his lifetime. This is where it all began for Dante, growing up in the heart of Florence. 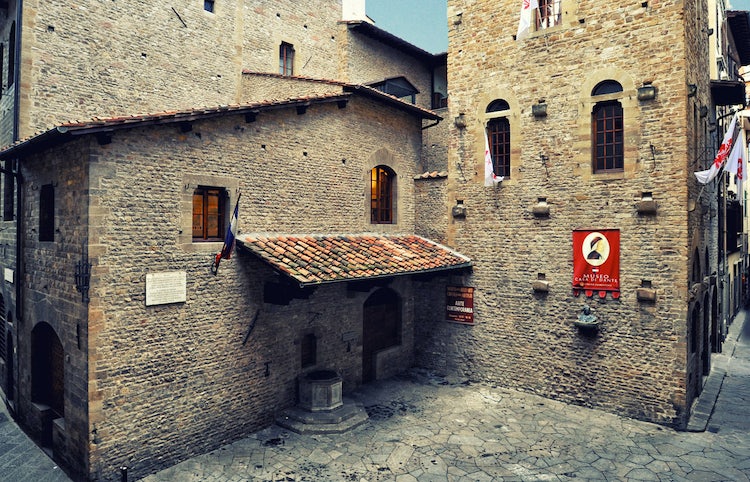 The St. Margaret church, dating as far back as 1032, is located on a small side street down from the Casa di Dante as you head to Via del Corso. They call this Dante’s church because this is where his family attended and where he officialized his arranged marriage with Gemma Donati, however, it actually appears as if Beatrice is the star here.

According to legend, Beatrice's remains can be found here at the family Portinari's tombstone, which sits just to the left of the main entrance. However, researchers suggest that she would have been buried in Santa Croce since that was the church her husband's family belonged to.

Tradition holds that visitors can plead to Beatrice to ask her to fix their love lives, leaving letters in a basket next to her shrine. If you're in need of help with your romance, make sure to make a stop and drop off your note!

As the name suggests, this is supposed to be a copy of Dante's face after he died, it is often referred to as a funeral mask. The tradition actually says it was sculpted at a later time from the effigy on the tomb of Dante, whose remains are in Ravenna. And recent studies, confirm that by suggesting that it was most probably carved in the late 1400’s by Pietro and Tullio Lombardo.

This is over 150 years after Dante’s death.

After having passed from one hand to another, the mask is now on exhibition in Palazzo Vecchio. Displayed here, it has come to symbolize both his political contribution to the city of Florence and his essential role in the development of Italian literature, culture, and civilization.

Gazing upon the closest thing we have to the true likeness of Dante is an intriguing glimpse into the past.

Make sure to visit Palazzo Vecchio 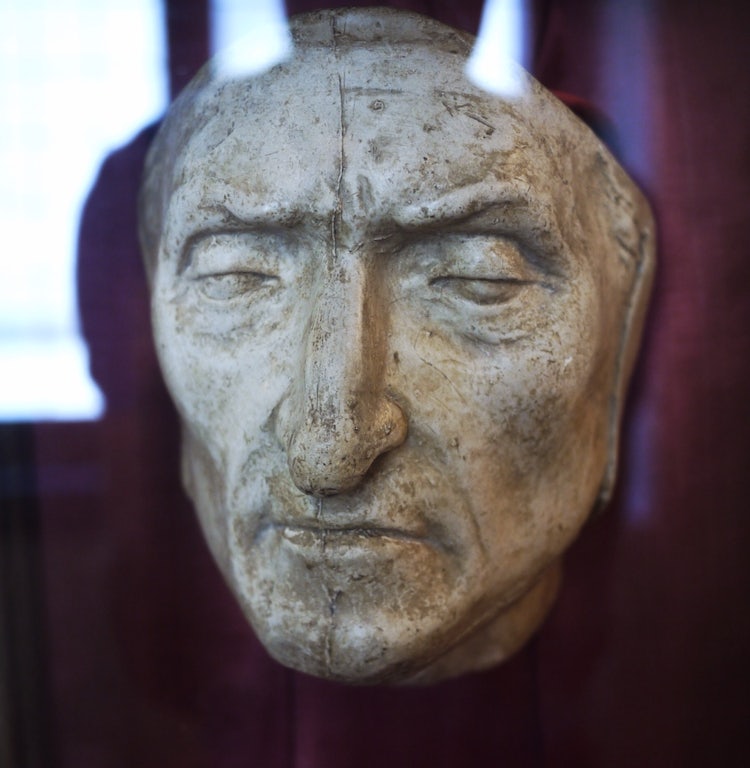 Recently sold to be restructured into luxury apartments, Palazzo Portinari Salviati in via del Corso 6 was once the property of Folco Portinari, Beatrice's father. He was a banker and the founder of the Santa Maria Nuova Ospedale in 1288. Though many times referred to as the house of Beatrice, it was actually her family's home where she grew up but not where she lived after marriage. As you walk by this house right around the corner from the Church of Santa Margherita dei Cerchi, you can try to imagine yourself as Dante would, anxious for a sighting of his adored muse.

There is no recorded history that this bridge is actually where he encountered Beatrice on one of the famous three encounters, yet the noted painting “Dante and Beatrice” dated 1883 by the artist Henry Holiday on display in the Walker Art Gallery in Liverpool, England is a wonderful visual of the colors, clothing, and attitudes of the time. It gives form to the memory of the one meeting where Beatrice supposedly acknowledged Dante and from where the words of "La Vita Nuove" sprang forth.

From here, you can gaze towards Ponte Vecchio and imagine the lovely Beatrice as she glides by Dante, an intense young man furiously composing prose to woo his damsel. 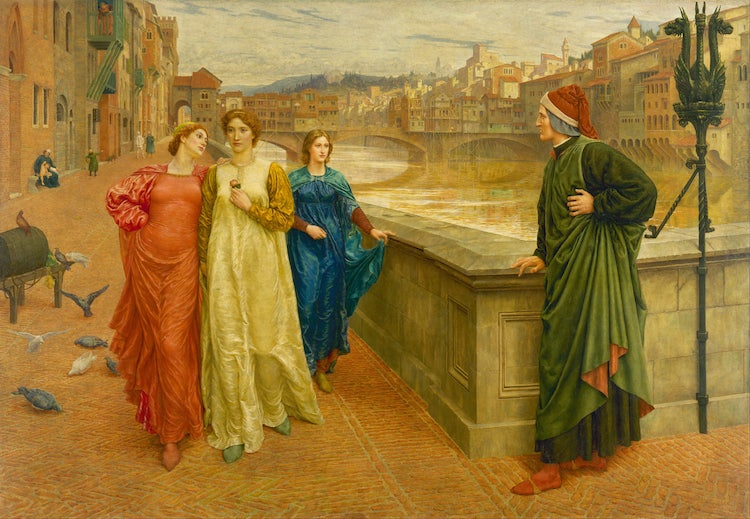 On a building just opposite the right side of the Cathedral (the south side), you will find a large marble plaque engraved with the words: "Sasso di Dante". It is said that Dante frequently could be found sitting on a rock placed at this point, seemingly absorbed in his meditations. A common story told by the locals:

One day a man passed by and asked, "Oh Dante, what do you like to eat?" And without looking up or breaking his train of thought, the poet replied, "Eggs!"

The next year, the same man walked by the same spot and once again saw Dante absorbed in his thoughts. He called out “And how do you like them?” Dante replied without hesitation: “With salt!”

I think that story needs to be taken with a grain of salt, because not far away in Piazza delle Pallottole near Via dello Studio, on the right of the apse of the Duomo, there is a large boulder with a plaque that says "I'vero Sasso di Dante". (The real stone of Dante). Which is the right location?

Outside the Church of Santa Croce stands a grim and scowling marble statue created in 1865 to celebrate the 600th anniversary of the birth of Dante. However, the truth is that he is only a ghost here! The Florentines have long desired that Dante return to their city after his exile, especially after his fame as a poet, even if many  (even today) still find him guilty of treason!

While he died and was buried in Ravenna when in exile, it took a couple of hundred of years after his death before Florentines even decided they wanted their poet back. They went as far as to build a beautiful memorial for his remains for the day he would return. They made several requests to the city of Ravenna to have him returned to Florence but it wasn’t until 1519 with a papal order, which was hard to refuse, that Pope Leo X even managed to get a response from Ravenna.

They were sent an empty coffin. Apparently, the Franciscan monks in charge of Dante’s remains secretly removed them from the tomb and hid them in their monastery. Moral of the story: he still hasn’t returned to his native land but you can still visit Santa Croce to see his memorial inside the church and his statue overlooking the piazza. 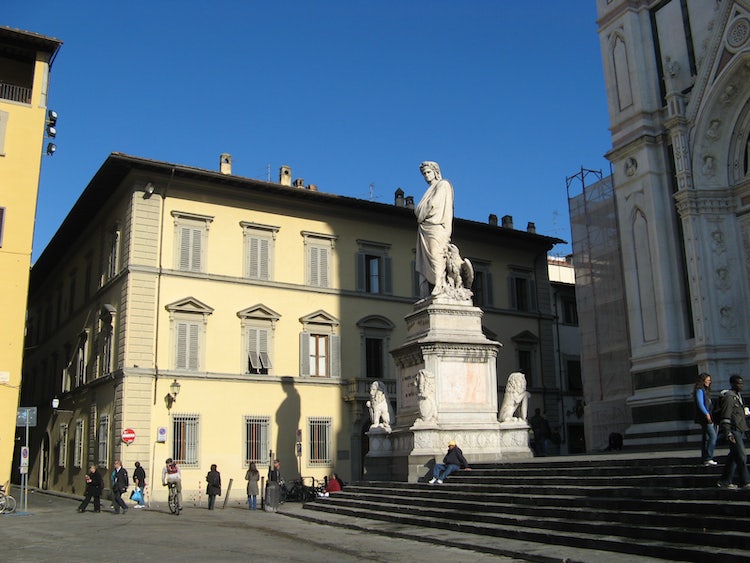 As you wander through Florence visiting these places known to Dante, we hope that you feel some of his poetic inspiration!