Free Entrance & Games for the Kids

Whoever chooses Florence as their final destination while on holidays, definitely has intentions on visiting the artistic and cultural beauty. However, some are fortunate enough to spend more than a few days in the city, finding time for a few other (fun) experiences.

There are those who love to spending time browsing the store windows and doing some shopping, or those who prefer a tour outside of the city, and those who like to indulge in a bit of relax in a spa and those who want to organize a yummy picnic or an afternoon outdoors in the parks and green areas of Florence.

Quite a few of the Florentine gardens lend themselves perfectly to a few hours of fun, especially with the kids.  These areas are comprised ofwide open grassy areas and jungle-gym styled games - if you know where to find them. All of the gardens listed below have free entrance, and a few are always open, but the majority have open and closing hours according to the season.

In the City Center of Florence or pretty close by

The gardens in the historic center of Florence are normally are characterized by a “monumental” status and the larger part of these are not really suited for the "more energetic" members of the family, not to mention a picnic with a plaid spread out on the grass. For example, the Botanical Gardens or that the Boboli Gardens where it is expressly prohibited to have a picnic.

Good thing there are some very valid parks with playgrounds which are easy to reach.

One of the few situated in the heart of the city and just a few steps away from the Santa Croce square, is the Borgo Allegri, a small garden which is just perfect for a short break between museum visits. It is equipped with games and toys for kids and has a small grassy area. 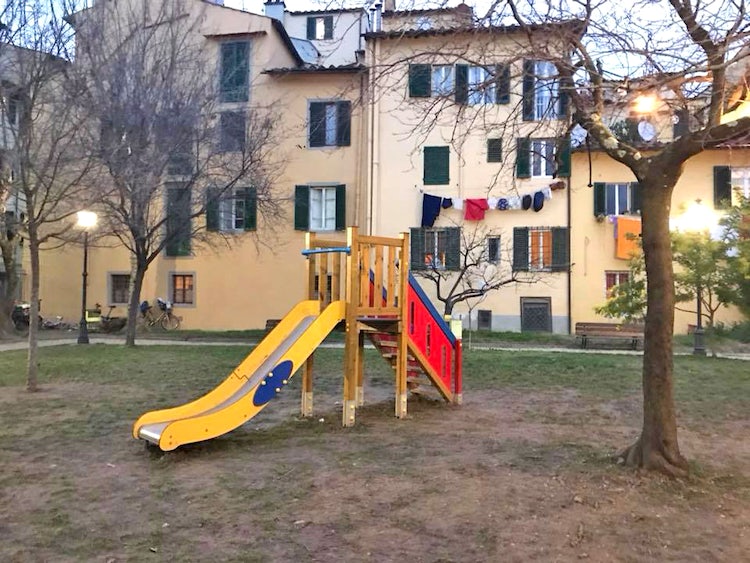 On the other side of the Arno River (Oltrarno) you will find the public gardens called Lungarno Santarosa, which is also furnished with an area dedicated to the kids. Further down the river, near Porta Romana, you will find the Giardino delle Scuderie Reali (The Royal Stables Gardens), located on viale Machiavelli, facing the local high school for art and the Giardino Bobolino (not to be confused with Boboli!); both are just on the outskirts of the historic center, giving you the possibility to move away from the chaos yet giving you an excellent opportunity to enjoy a different view of Florence, including the lovely Piazzale Michelangelo.

Following the road via dell’Erta Canina, between the panoramic square named above and the area known as San Niccolò, you will find the Giardino della Carraia. Not even many Florentines know about this little secret garden since it is a bit hidden in the trees! 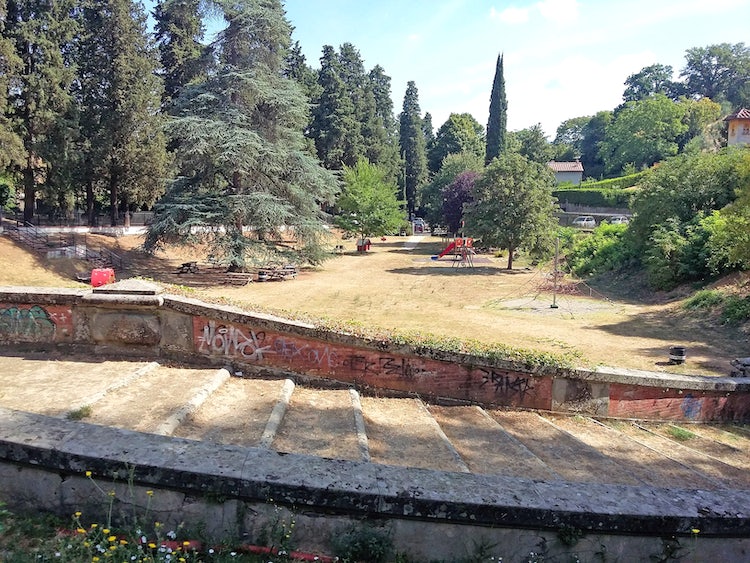 Larger Parks just Outside of Florence

It is pretty easy to deduce that the larger parks are outside of the historic city center. Even though they are a bit further away, they represent a valid green area of the city, and are rather easy to reach either by public transport or by bike (check out the city rental bikes at Mobike). And, if you prefer a good hike, they can be reach on foot.

The Parco delle Cascine is the largest park in Florence, and probably one of the better known. However, a word of caution, since it is a vast space, choose the area where you visit carefully, looking for places that are not too isolated - while avoiding those where you will find boisterous friendly parties, soccer games and BBQs (if you are looking for some tranquility). There are several areas with large shade trees and games for the kids - even a small amusement, which is open during certain times of the year. 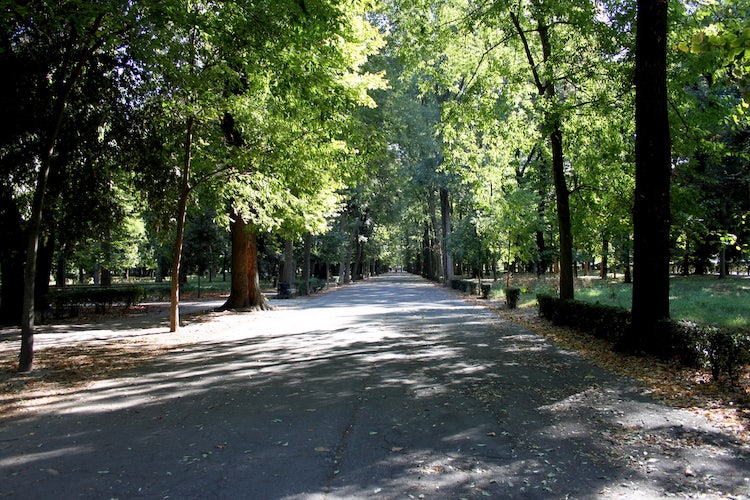 Crossing the Arno River, you will find another park which is suited for a “spur of the moment” picnic and an area dedicated for the kids: Parco del Boschetto, in the Soffiano zone sometimes also called the park of Villa Strozzi.

Remaining outside of the city lines, in the direction of Via Bolognese, there are two other gardens which the locals enjoy on sunny days. The first is the Giardino dell’Orticoltura, featuring large grassy areas and games for the kids. In the summer, you can expect to find a bar for a gelato, drinks or snacks and in the evening, you will often find some kind of musical entertainment.

Just a short distance way there is a splendid park with century-old trees: it is the Stibbert Museum garden (via Stibbert, 26). There is free entrance to the garden when the museum is open (Insider Tip: visit the museum, especially the kids find the exhibits fascinating.) This garden doesn’t have a play area for kids, however it does provide lots of space where you can indulge in a long walk or simply sit and relax. Two more places of note are located fairly close by, the Giardino Baden Powell, and the Parco di Villa Fabbricotti, an extensive public park with an entrance on the road Via Vittorio Emanuele.

Towards the Southern Tip of Florence

Following the Arno towards the south of Florence, there are two garden areas with playgrounds set along the banks of the river: Giardino Lungarno del Tempio and Giardini Caponnetto. At the first garden, in the summer, you will find lots of little places set up with Italian styled street food, at a reasonable price.

On the banks of the Arno River, just after the Verrazzano Bridge, you will find Parco dell'Anconella, with a large area for games, a small amusement park and blow-up toys for the very young. This area is often frequented by the locals, and you will find picnic tables, a scaled version of Brunelleschi’s dome (the very one you see at the Cathedral in the city center!) and the occasional yoga class. 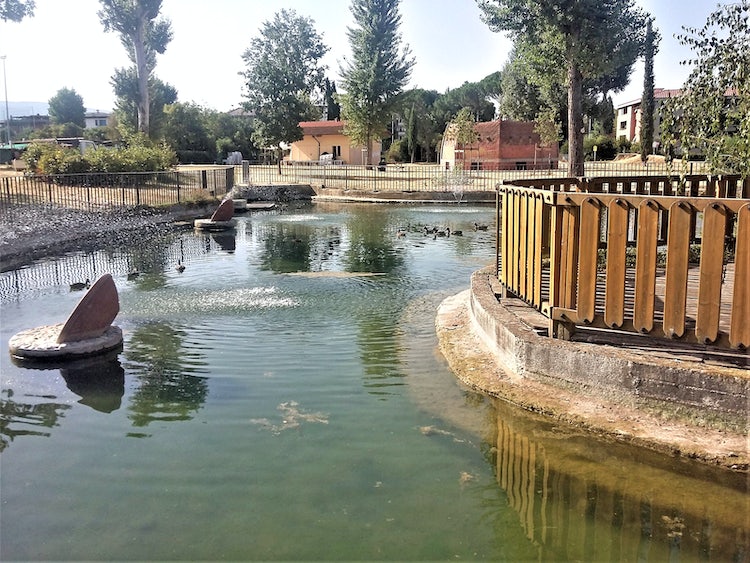 The little lake of the Parco dell'Anconella

Those who want to really escape Florence for a few hours should head over towards Parco di Villa Demidoff in the town of Vaglia, which can be reached with public transport. This park boasts lots of wide open spaces and it is perfect for a picnic, as well as a few hours in the fresh air. 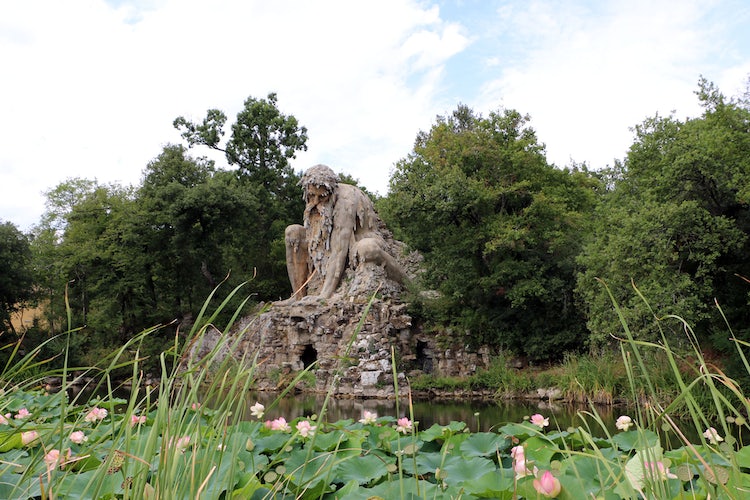 The "Colossus of the Apennines" inside the Park

Inside this garden you will find a café which is well stocked with panini, snacks, gelato and drinks however, just a short distance from the park you will also find shops and cafés where you can by the necessary ingredients to create your own picnic menu. This park is seasonal, and is normally open from Easter to October and on the weekends. Opening hours and other important information can be found in this article.

Enjoy some time outdoors in Florence's...

Visit one of these 6 green parks, adventure...

Museums for Kids in Florence

Love art and history and want to share that...