Following the Medici through Florence

If you’ve been reading about Florence, you have of course by now heard of the Medici family and the important role they played in Florentine history.

What you may not know, however, is that their footprints are still very visibly present in the city’s monuments, piazzas and historic buildings today.

On this unique walking itinerary of downtown Florence, you can join us or maybe even return upon sights you’ve already seen to rediscover them following the footsteps of the famous Medici family, traveling back in time all the way to the fifteenth century.

Below are the stops in the heart of the city of our itinerary:

Our itinerary can’t start anywhere else other than at the Palazzo Medici Riccardi, the Medici’s first home (bought and expanded in 1659 by the Riccardi family).

It was Cosimo il Vecchio who trusted Michelozzo to start work on building it in 1444, which continued until its completion in 1462.

Note the splendid chapel of the magi by Benozzo Gozzoli, apprentice of Beato Angelico. The frescoes found within the small cappella depict some of the most important members of the illustrious Medici family. 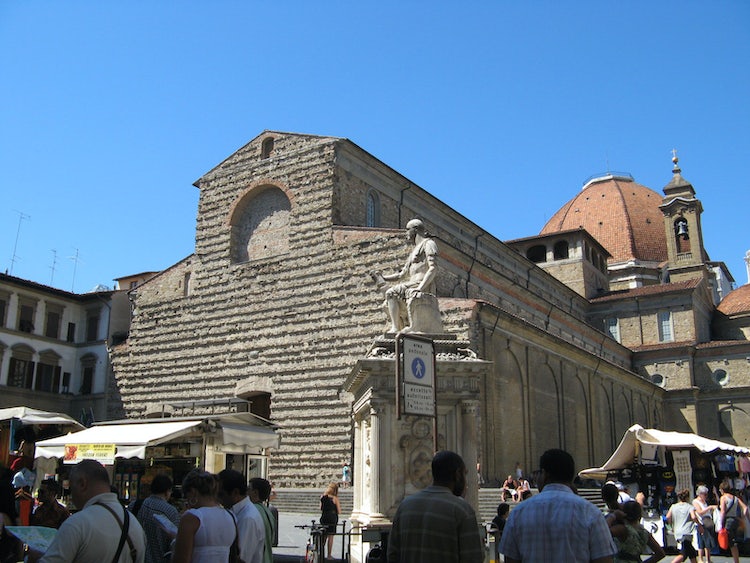 Let’s move onward towards Piazza San Lorenzo, where the old Basilica of San Lorenzo is located.  During the fifteenth century, Cosimo il Vecchio entrusted Filippo Brunelleschi to the grand project to restore the church.

The Basilica of San Lorenzo became the burial place for the Medici family, starting with Cosimo il Vecchio, who was buried in a column under the central altar.

In 1540, Palazzo Vecchio called the Palazzo dei Priori at that time, became the official residence of the Duke Cosimo I of the Medici and of his court. The palazzo went through many changes, the ones commissioned in 1555 to Giorgio Vasari transformed the palace greatly to what we see today.  The palazzo did not take the name “Palazzo Vecchio”, as it is known today, until the ducal residence was moved to Palazzo Pitti. 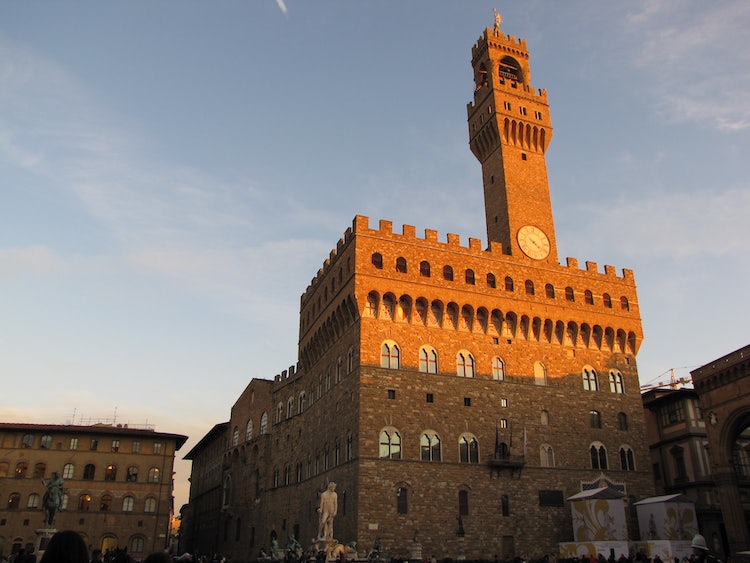 In Piazza della Signoria we pause in front of the monument of Cosimo I, commissioned to Giambologna by Ferdinando, son of Cosimo (who you will later see Piazza Santissima Annunziata).

The Grand Duke of Tuscany on horseback seems proud. On the pedestal that supports the bronze statue are three low reliefs that depict key moments of Cosimo I’s life: his election to Duke, his conquest over Siena and the bestowal of the title of the Grand Duke of Tuscany. Also on the pedestal, note the Medici stem of the Capricorn, which refers to the greatest leaders’ astrological sign.

Our itinerary continues along to the Uffizi Gallery, designed by Vasari. Originally built as offices for the ducal magistrate, they later became a private gallery in 1581.

It was not until 1789, however, thanks to the illuminated Grand Duke Pietro Leopoldo, that the gallery finally opened to the public.

In 1565, in celebration of the marriage of Francesco de’Medici and Giovanna of Austria, an important aboveground passageway was built linking the Uffizi to Palazzi Pitti which allowed the grand dukes to move from the two without having to step outside. This passageway, about 1 km long, is known as the Corridor Vasariano or Vasari Corridor. Following the corridor from outside above Ponte Vecchio, we reach Palazzo Pitti, which is today one of the most important museums in Florence. 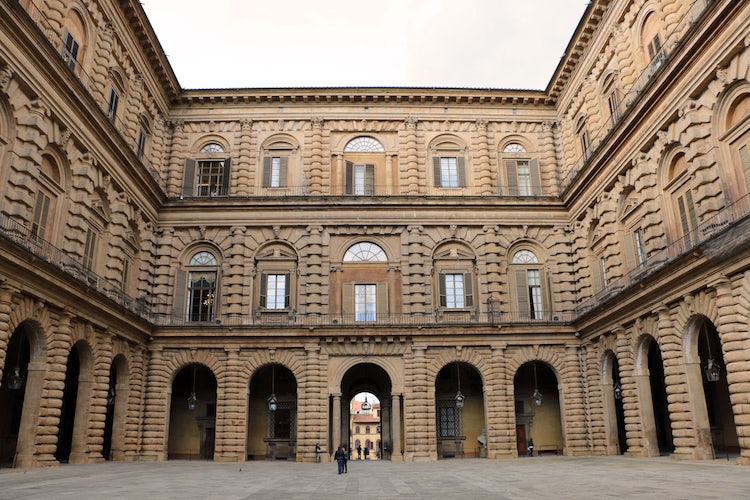 Palazzo Ramirez de Montalvo is located in Borgo degli Albizi, distinguishable by its façade’s precious decoration, known as “a sgraffio”. The palazzo housed Antonio Ramirez de Montalvo, cup bearer for Cosimo I de’ Medici. The role of cup bearer was one of the most important of the court, having the duty of serving drinks (and making sure that they were not poisoned) to the Grand Duke. On the building’s façade, note the Medici stem, decorated with the turtle with a sail on its back (called the Festina Lente) and the Capricorn, both symbols of Cosimo I.

We now proceed in the direction of Piazza Santissima Annunziata. On the way, we pass in front of the Opera del Duomo Museum entrance and we see just above the entrance a small bust of Cosimo I, with the ducal crown and the Medici stem.

We now enter inro via de’ Servi, where we find two other buildings belongings to the "court": Palazzo di Sforza Almeni, who was another cup bearer for Cosimo I, and Palazzo Budini Gattai. This last building was built by Bartolomeo Ammannati and was bought by Cosimo’s secretary, Ugolino di Jacopo Grifoni. It is the only example of a building constructed and left with visible bricks in Florence. 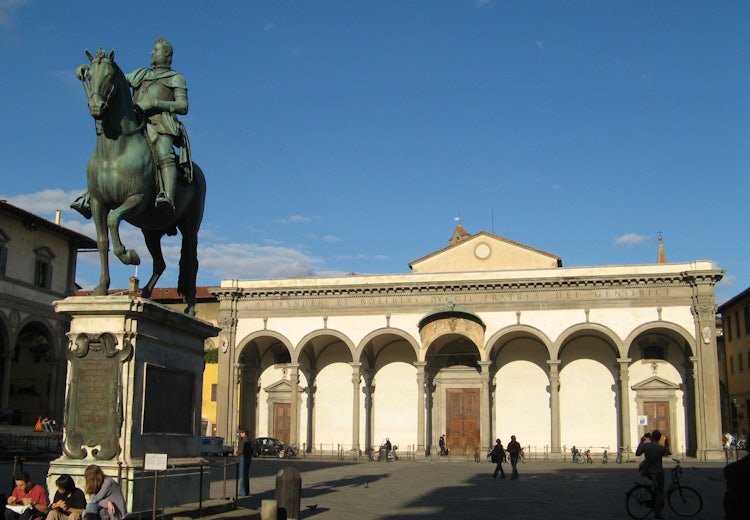 Our journey into 15th century Florence where the Medici family ruled ends in the beautiful Piazza Santissima Annunziata and the church, where the equestrian monument of Ferdinando de’ Medici, son of Cosimo I, stands tall. Interestingly, the Grand Duke is depicted turned towards Palazzo Vecchio (and thus, towards his father’s monument), but also towards Palazzo Budini Gattai, where it is said one of his lovers lived.

Also in the beautiful Piazza SS Annunziata is the Hospital of the Innocents, the first example in Europe of a structure dedicated to helping children in need (it was an orphanage) and one of the first examples of Renaissance architecture, designed by Filippo Brunelleschi.

We hope you have enjoyed this special tour through the streets of Florence discovering some of the most interesting spots connected to the Medici family.