The Last Supper at Ognissanti

Discover the tombs of the famous & secret frescoes 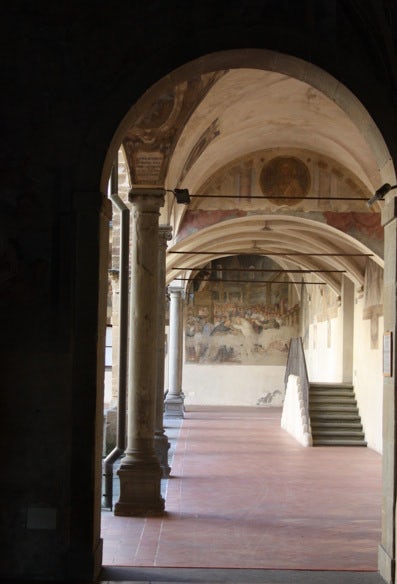 There is a place in Florence that tells a story of saints, poets and navigators. The Convent of Ognissanti (All Saints) jealously guards priceless treasures of paintings, secrets of Florentine nobility and a monumental last supper by Domenico Ghirlandaio, painted in 1480.

You can enter into this mysterious world by walking down the passageway next to the church where you will emerge from dim light into a bright Renaissance cloister. Your curious eyes will find frescoed lunettes on each wall of the entrance of the wide refectory of the convent, founded by the order of Umiliati friars in the thirteenth century.

Thanks to generous donations from wealthy Florentines, such as the Vespucci’s and Lenzi’s, who lived closeby at the "Prato di Ognissanti," the church and the convent were decorated by the greatest Florentine masters of their times: Giotto, Botticelli and Ghirlandaio.

Greatest Artists of His Time

Ghirlandaio received various commissions from Ognissanti: one of his greatest masterpieces is the Last Supper inside the refectory.  I encourage you to look closely near the feet of Christ, where you will see that it is clearly dated 1480. The painter chose an open loggia as the setting, exploiting the architectural elements of the vast hall and extending it with an illusionistic effect depicting a garden in the background. Unlike the other Last Supper frescoes, here you find more naturalistic and symbolic elements that generate a sense of every day life, calm and deep harmony. 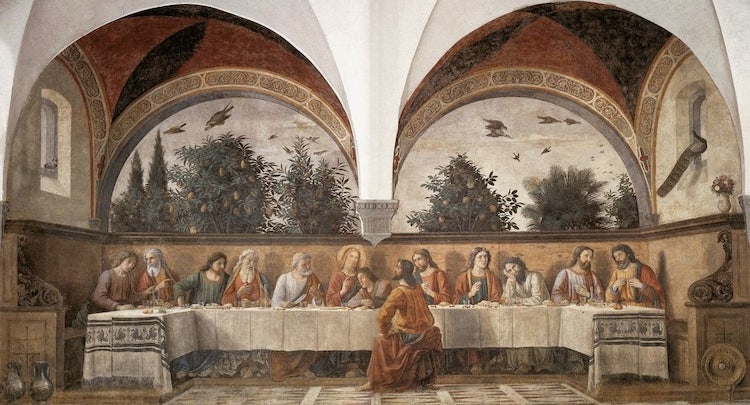 Details offer a Guide to Understanding

The trees allude to precise Christian symbols: the orange and cedar trees evoke the beauty of Paradise, the palm tree and the cypress foreshadow the martyrdom and death. The other natural elements such as birds in flight or sitting within the two windows have other symbolic values.  The hawk on the right, which is chasing the duck, is thought to be an emblem of the struggle of good versus evil, or a symbol of sacrifice for the salvation of the flock, metaphor of Christ, redeeming mankind. Notice the elegant and colorful peacock's tail depicted on the left: for its renewal of the plumage in spring it often symbolizes immortality and rebirth. 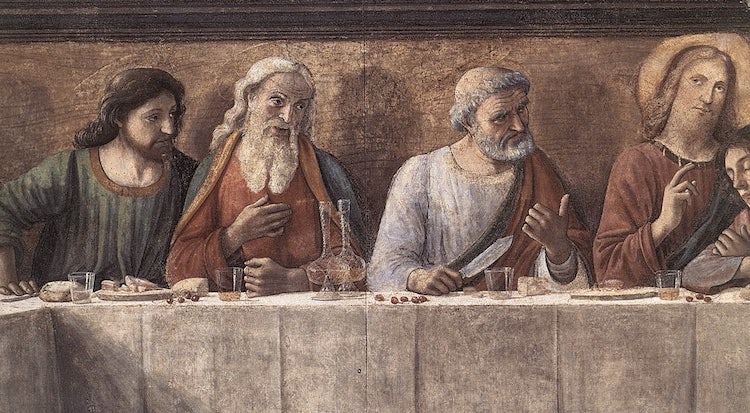 Crystal clear water jugs and fruits are well defined along the table, set up with an elegant preciousness in each detail. Even the bright tablecloth is finely embroidered, featuring dragons along the edges. I love each touch of color of the scene: the ripe apricots as a symbol of sin, the simplicity of lettuce, symbol of penance, lush red cherries and pomegranate, allusion to the sacrifice of Christ, who occupies the central position in the scene.

Right in middle, he is surrounded by the Apostles, announcing that one is going to betray him. The figure of Judas is easily recognizable by his separated position, holding the bag with the reward of his betrayal. Like in Andrea del Castagno’s Last Supper, Judas is sitting on a stool on a lower level than all the other characters. Peter holds firmly the knife in his left hand, while John, the young apostle is tenderly asleep by the right arm of Jesus. Every gesture is measured, creating a balanced atmosphere, lacking of dramatic expressivity.

At either edge of the bench and on the vase of flowers you will find a curious detail: the monogram of the friars of Ognissanti. Their old coat of arms consists of a double cross,  featuring the letters OSSC, plus a small "i" within the C: in short “OMNES SANCTI” (All Saints). 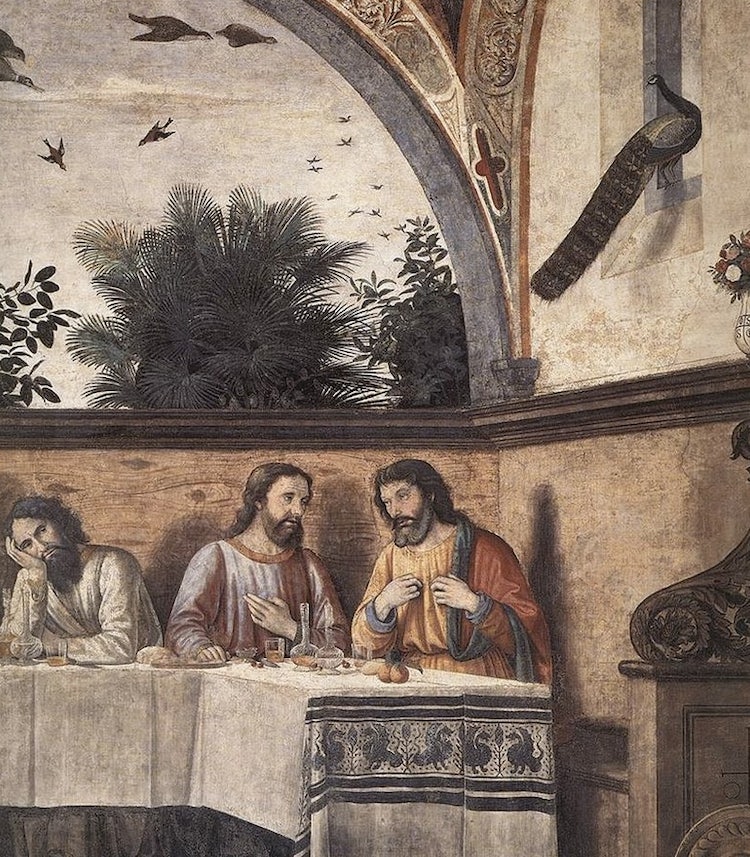 After the flood of 1966, the fresco was detached and restored. On that occasion, the sinopia was discovered underneath, and displayed aside: thanks to this preparatory sketch you can notice that the original expression of Christ looked very different. The face that we see today is in fact due to a restoration of the XVII century, when the painter Carlo Maratta repained the head completely, modifying it.

Remarkable and well defined are the shadows of the characters, depicted with care thanks to a careful study of natural light coming from the windows on the left wall.

After the completition of this masterpiece, Ghirlandaio left for Rome, where he participated in one of the most prestigious artistic challenges of Renaissance art: the decoration of the Sistine Chapel.

Visit all 7 Last Supper in Florence