No more eating street food in the streets

Were you craving one of those delicious panini and schiacciata found along the via de’Neri? Word to the wise, remember to eat while walking because it is now against the law to sit and eat along the roadside or in certain public areas.

As of September 4th a new law is on the books by the Comune of Florence which prohibits anyone from stopping to eat in the streets or on the steps of monuments and churches during mealtimes in the areas frequented by tourists (even more precisely) via dei Neri, Piazzale degli Uffizi, Piazza del Grano and Via della Ninna.

This news has given rise to a bit of classical Florentine irony and has become the butt of many jokes, not to mention a few problems along the way, especially since hundreds of people every day chose to get something to eat in the area around Piazza della Signoria, forming long lines for a tasty panino. Since most of these places don’t offer seating, it isn’t unusual to see these consumers eat their “street food” in the street, in other words, sitting on the curb in front of stores, palazzos, and monuments.

The local government has decided that enough is enough and that this new trend, which they call “bivacco”, needs to be curtailed and they have issued new regulations with fines up to 500 Euro for those who insist on not heeding the warnings.

At the moment in the areas subjected to the laws, you will find not only warning signs but also the municipal police who are “inviting” guests to the city to respect the new laws.

This new law is a direct result of numerous complaints by the businesses in the affected areas and one rather extreme case of violence last summer when a business owner was attacked after having asked a young man to move when he sat down to feast upon his panino in front of the entrance to his shop.

In the meantime, it will be interesting to see if this new regulation will be enough to bring back a bit of order in the area. However, what is certain, any transgressors who receive a fine will quickly lose their appetite for their delicious panino.

The new laws “anti-bivacco” is just one of the various methods the authorities are advertising the new campaign #EnjoyRepectFirenze, promoted by the city of Florence. This is an attempt to encourage good behavior from guests and tourists while visiting the city and reprimanding bad behavior with fines – sometimes even rather hefty sanctions.

It is unfortunate that these things, which would appear obvious to many, need to be highlighted as “bad behavior” however, it appears that guests, and locals alike, need a quick refresher course: 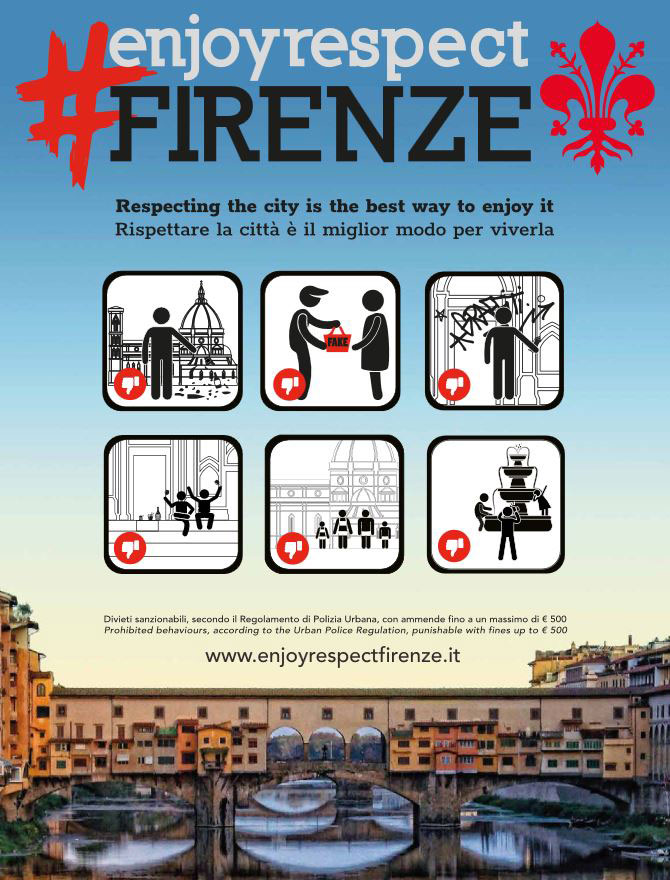 As per the good behavior, they are advertising 10 helpful hints: 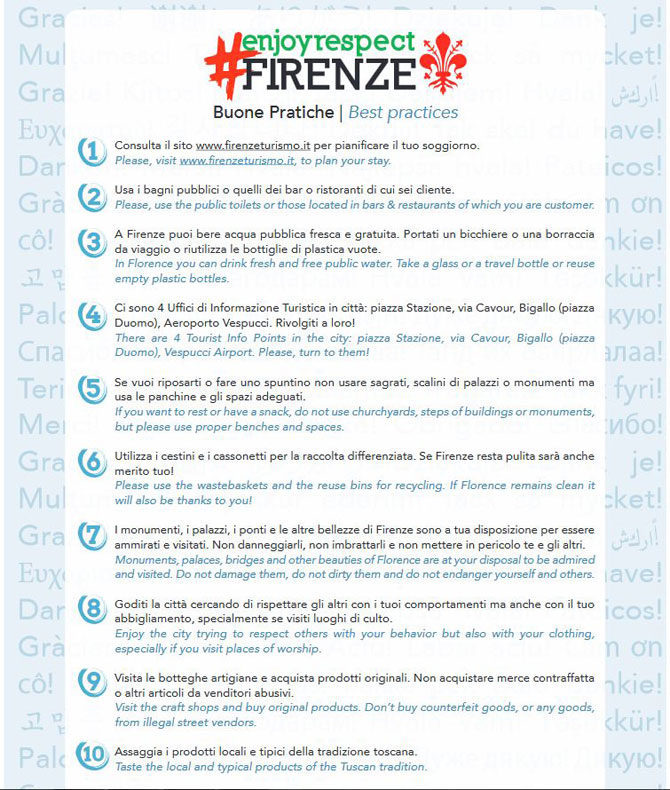 What do you think, is it really necessary to publicise is good and bad behavior while on vacation or visiting other places? We are curious to hear your reaction to this news.