The Chapel of the Magi in Palazzo Medici-Riccardi

The Chapel of the Magi is located in one of the most ancient palaces in Florence, the Palazzo Medici Riccardi. As the name implies, the palace found on the very central Via Cavour, belonged to the Medici family who started its construction in 1445, at the time when Cosimo de' Medici, also known as Cosimo "Il Vecchio", ruled the dynasty. The design of the majestic palace was entrusted to the architect Michelozzo di Bartolomeo, who completed it in about 10 years.

The building is one of the first examples of what later became known as Renaissance architecture in Florence, even though it still has many traditional elements such as the use of "pietra forte", the lower "rustic" hewn stones and mullioned windows. 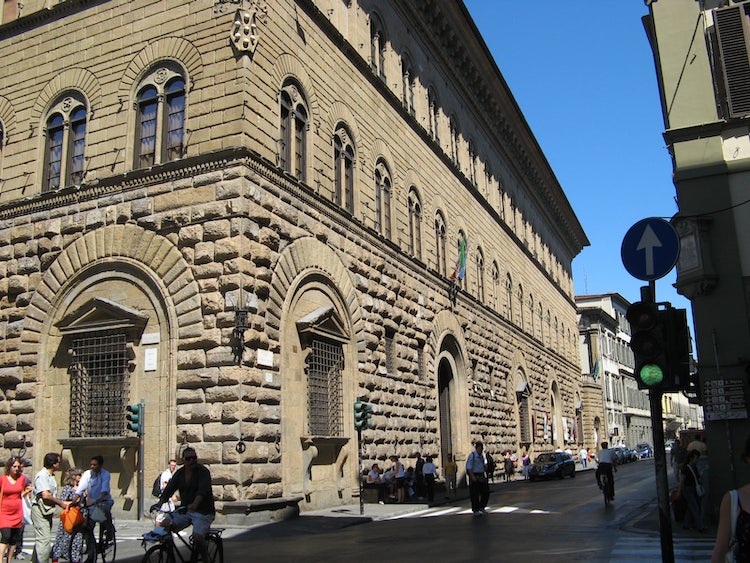 Palazzo Medici Riccardi, as we see it today, is a much larger structure than the original as it was enlarged in 1600. The chapel was therefore at the center of the home, point of arrival for illustrious guests and the starting point for visiting the main apartment along Via Larga, back when the apartment had both a private as well as publicfunction.

Visit the Chapel of the Magi with a Guide

If you would like to visit Palazzo Medici Riccardi and the Chapel of the Magi with your own personal tour guide, this Medici-inspired tour which also includes the Basilica of San Lorenzo and the Medici Chapels is for you!

The real jewel of the building is on the first floor of the Palazzo Medici Riccardi, the Chapel of the Magi frescoed by Benozzo Gozzoli in the fifteenth century. It was the private chapel for the Medici family, but as mentioned above, it also was shown to visitors. Here, Benozzo Gozzoli, pupil of the famous Fra Angelico, created a beautiful series of frescoes depicting the Cavalcade of the Magi to Bethlehem.

The fresco's colors and atmosphere bring to mind Flemish paintings and tapestries and are without a doubt the artist's most famous work of art.The theme of the Cavalcade of the Magi occupies three of the four chapel walls, those on the eastern, southern and western sides. "The Journey of the Magi" is on the largest wall, while the "Vigil of the Shepherds awaiting the Announcement" is on the wall above the doors to the sacristies. 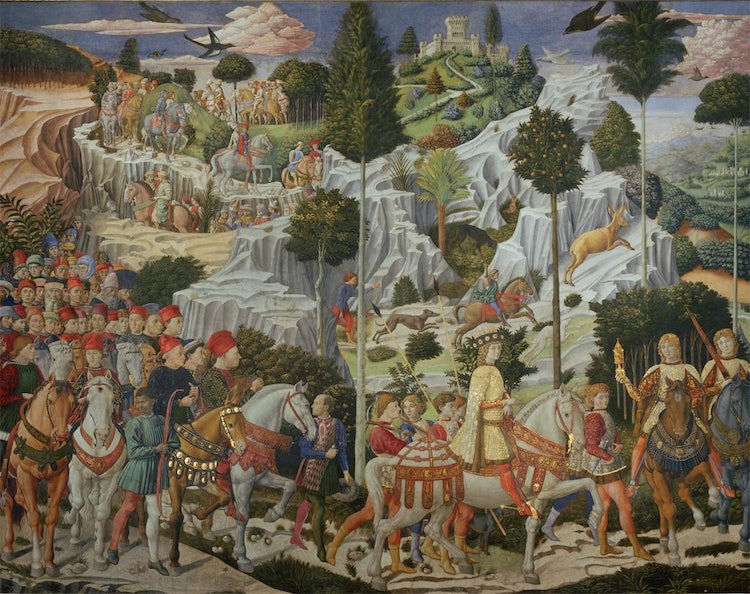 On the walls of the apse you can find "Angels in Adoration" which face toward the altar. At the center of the altar, the altarpiece of the "Adoration of the Child" by Filippo Lippi was here. Fortunately, you can now see a copy where the original used to be displayed, while the original can be found in the Museum Gemäldegalerie in Berlin (yes, sold a long time ago). Behind the altar, you'll find the symbols of the four Evangelists.

Some parts of the decoration have been unfortunately lost as a result of structural changes of the building.

The main and most famous part of the chapel is the scene of the "Journey of the Magi", a sacred moment depicted by Benozzo Gozzoli with elegance and splendor you can admire in the representation of the characters, the painted with sumptuous robes and regal finishings. In this masterpiece, Gozzoli blended art, history and public celebration.

In the procession of knights, among the followers of the Magi, were in fact numerous portraits of members of the Medici family which we can identify. On the wall to the right of the altar, on horseback is Cosimo Il Vecchio, "the Elder", who commissioned the work as well as his son Piero the Gouty and his grandchildren Lorenzo and Giuliano. The young man on horseback leading the procession is Lorenzo, who later will be known as " the Magnificent".

The fresco also includes collaborators and allies of the family (bankers as well as political supporters) according to the custom of the time, such as Sigismondo Malatesta, Lord of Rimini and Galeazzo Sforza, Duke of Milan.

Among the many faces you'll even find that of Benozzo Gozzoli, whose head is turned and his eye looks out toward the observer.

The chapel in the Palazzo Medici is one of the most charming settings of Florence's Renaissance, an absolutely fascinating little gem you should not miss visiting. Given the chapel's small small size, entrance to the chapel is limited to groups of up to 10 people at a time. 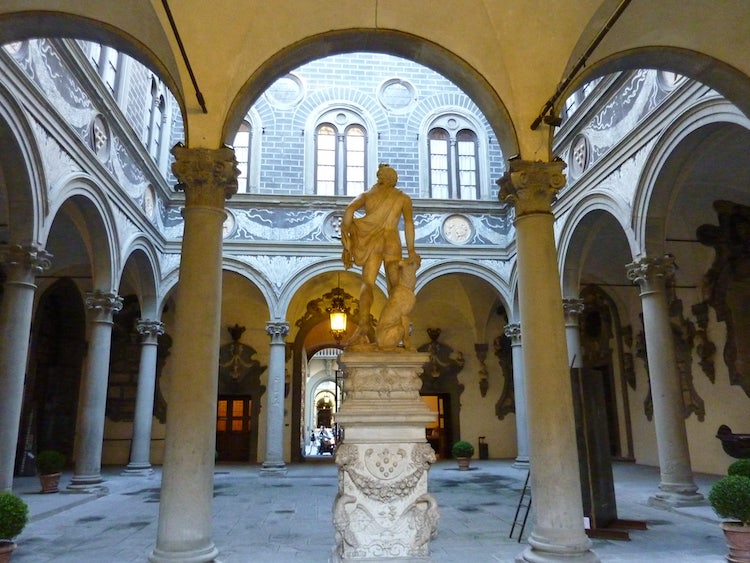 While the Chapel of the Magi is certainly the main attraction at the Palazzo Medici Riccardi, the same ticket will also give you access to the rest of the building and the temporary exhibits at the time.

On the ground floor, you'll cross by the perfect geometry of the Michelozzo courtyard on your way to visit the chapel. If you have a short wait, you can admire the "courtyard of columns", built in the 15th century.

On the first floor you can visit the rest of the main apartments that have been left furnished as they were and at the end, find yourself in a spectacular, golden galleria whose walls are covered in mirrors and ceiling frescoed by Luca Giordano at the end of the 1600s.

The Moreniana and Riccardiana Libraries are also part of the collections and are beautifully decorated, but yo visit them you have to exit the palace and go to Via Ginori to find the entrance into these two. Enjoy! 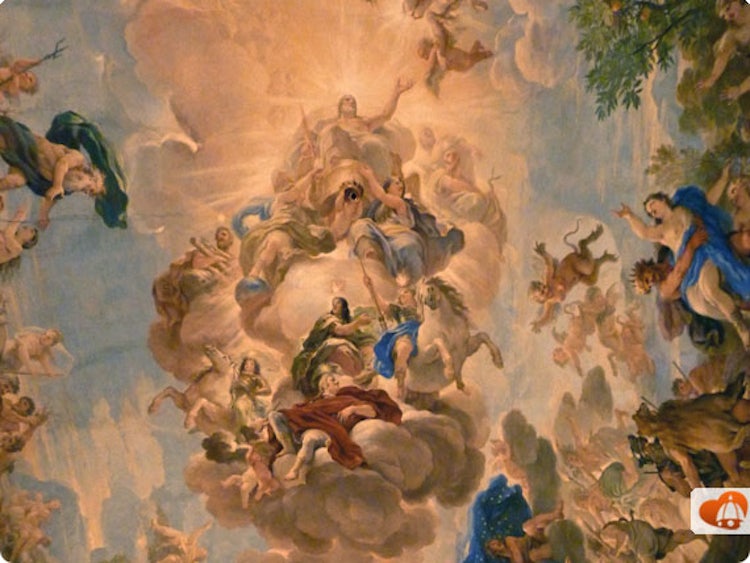 Monday - Sunday 9am to 7pm, CLOSED on Wednesdays
Ticket office closes at 6pm

Entrance to the chapel is reserved to a maximum of 15 visitors for a total of 15 minutes per group.
You can make reservations by phone at 055-276 8224 or just wait in line
The Palace hosts temporary exhibitions, those are NOT included in the ticket and therefore you need to pay extra to include them.