The museum and furnished nobleman's home, Palazzo Davanzati in Florence Italy, is charged with atmosphere and charm, holding the secrets regarding domestic life in the middle ages. Inside you will find rooms adorned with antique furnishings once used for meetings, a small private study, dining room, bedroom with original wall decorations and the lively kitchen suggesting the bustling variety of domestic tasks. 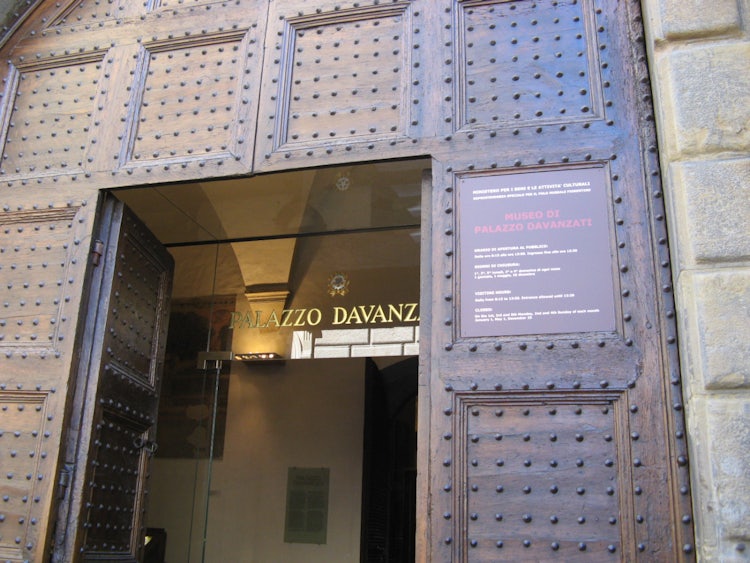 A Museum to Stoke the Imagination

The Palazzo was built around the mid-fourteenth century by joining together a number of tower-houses and other properties belonging to the rich Davizzi family. In 1578, the palazzo was purchased by Bernardo Davanzati, a successful merchant as well as a famous historian and intellectual.

The Palace represents a stage of transition between the closed, vertical structure of the medieval tower-house and the more spacious Renaissance palazzo, arranged around a central courtyard. On the ground floor, the façade features three large wooden gates, once used as an open loggia to host chats, commercial trading, waiting room and playground for family children. Leading up from the courtyard, supported on projecting flying buttresses, is the staircase: in stone up to the first floor and made of wood further above. Each floor features spaces dedicated to the private life of the family. 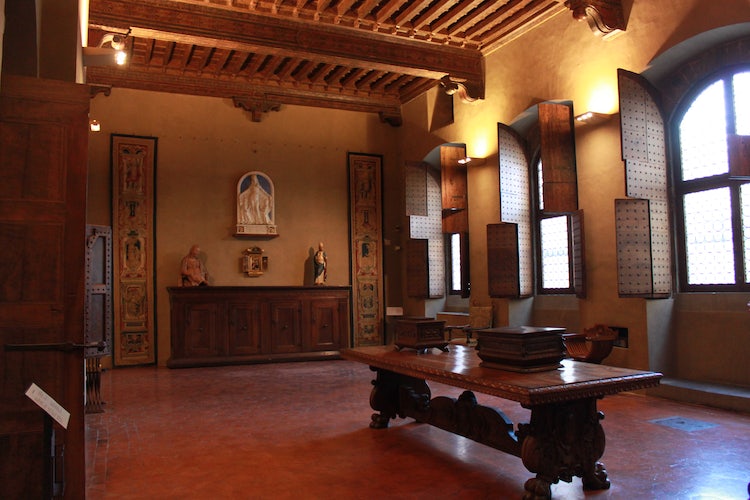 Stepping Back in Time

The walls of the main rooms and the exquisite bedrooms were decorated with frescoes and in winter covered by tapestries to keep the warmth in. Several rooms feature entirely painted walls, displaying geometrical motifs, birds and heraldic devices suspended from rings and lined with vair (“vaio”, fur from grey squirrels). Up high on the walls, a painted arched loggia offers trompe l'oeil views over gardens with plants and trees.

Hint: Great adventure for kids. I was only seven when I visited the Palazzo for the first time. It was absolutely love at first sight. I was astonished by the colorful walls, by the painted parrots, the curious tools next to the fireplace in the large kitchen. A walk through the Palazzo was my first trip back into the traditions of ancient merchants, of cooks preparing Medieval meals from ingredients purchased at the nearby Mercato Vecchio and of the echoes of domestic life and marriage taking place in a noble Gothic house.

The most interesting fresco decoration is inside the private bedroom named “Camera della Castellana”. The upper part of the walls feature a pictorial cycle of narrative character: around the entire wall, there are arches of a loggia with a garden forming the background to the various episodes of the courtly tale of the Chastelaine de Vergy.

The subject is a moralistic tale of love and death which was very well known in the 14th century in Florence. The tale derives from a French chivalric romance of the thirteenth century and tells about two couples who meet among citrus gardens, held conversations amongst towers and lush trees until there is just one of them, but no spoilers here! Go to Palazzo Davanzati to discover who survives!

The frescoes of the Camera della Castellana were created for the marriage of Paolo Davanzati and Lisa degli Alberti, which took place in 1350. They still inspire poetry and and an intimate romantic atmosphere. 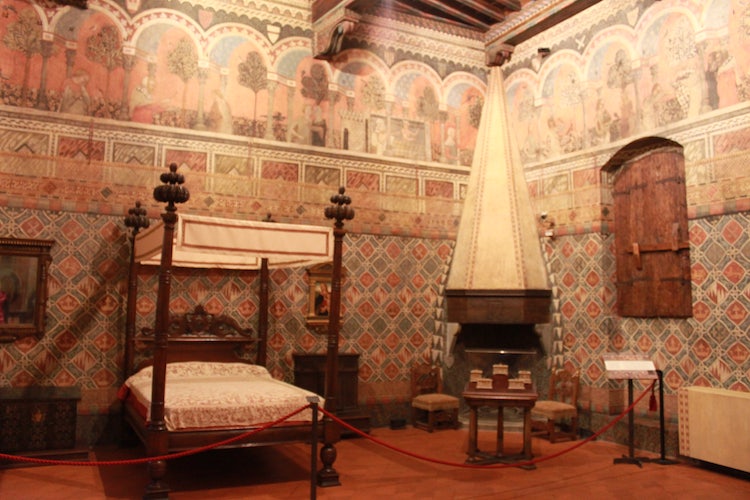 Preparing Dinner in the Middle Ages

In the kitchen, decidedly the more curious of the rooms for those who enjoy the Florentine recipes, besides pots and pans and the crockery, are utensils such as a citrus fruit squeezer, a corkscrew, a dough kneader and a grain mill used to separate the flour from the bran, a copper cauldron and an eighteenth-century churn for making butter.

The same room also displays various tools used for weaving (skein winder, loom) and for sewing.  The fireplace equipment in the kitchen and the other rooms is completed by andirons, utensils for use on the fire and wafer irons dating to the fifteenth and sixteenth centuries.  Jugs, bath tubs and pitchers and buckets made of copper and zinc for hygiene and the various needs of the home are distributed in several small bathrooms. 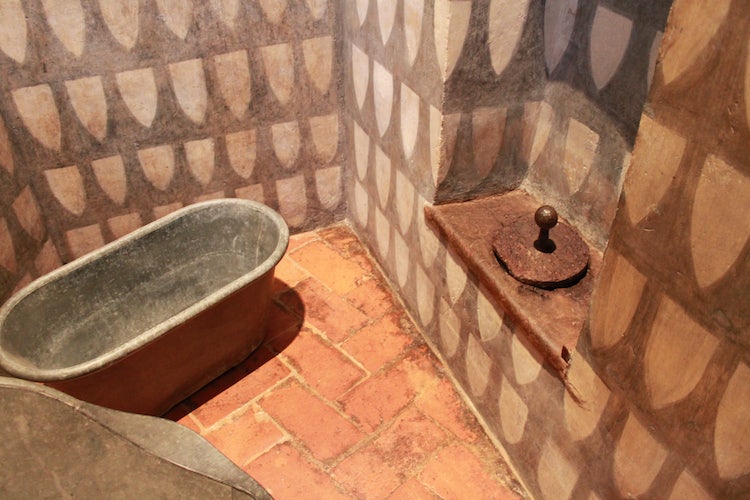 How about a few Surprises?

The absolute modern concept within the Palazzo is expressed by the presence of an internal well, the rare “agiamenti” (toilets) on all floors, the well-equipped kitchen on the third floor, all perfect comforts for the noble family living at Palazzo Davanzati in medieval times! On each floor, water could be drawn from the well through an opening in the wall (fitted with doors so the well was hidden, also kept children out). In the large basement area, a tank was used for the collection of rainwater.

Each room shows the culture, refinement and taste of the ancient owners.

The collection of lace and embroidery holds a special place among the various types of furnishings and accessories (which includes majolica, furniture, sculpture and paintings) housed in the museum. Some of the typical female domestic crafts include christening outfits with delightful gowns, coquettish bonnets and the most exquisite cushions. 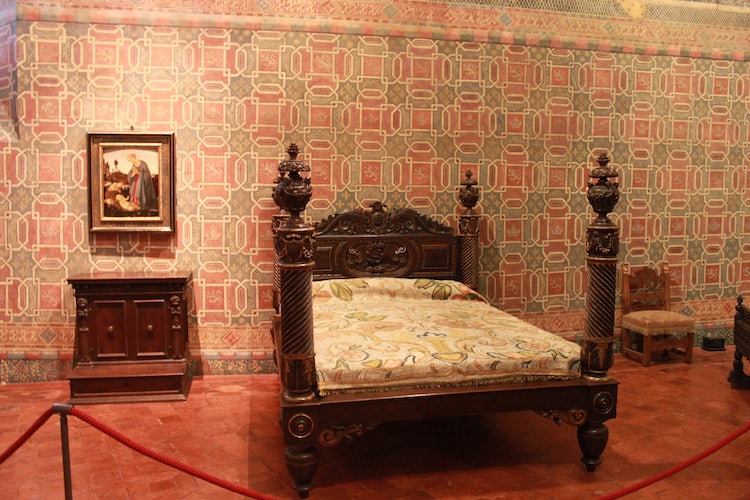 A Great Gift for the Remembering the Past

The furniture currently present in Palazzo Davanzati has no relation to the history of the building and the families that owned and lived in it. It was acquired through donations or on the antiques market specifically for the furnishing of the Museum; although not all the pieces are the originals of the palazzo, they do suggest the decor of a typical residence and also its evolution over time.  Among the furnishings are chests that were used as containers for clothes or linen or for precious objects.

In 1904, the Palazzo was purchased by the great antique dealer Elia Volpi, who first opened it up as the “Museo dell’Antica Casa fiorentina”. It was a stunning example of displaying objects he was selling, the exquisitely “Florentine” taste of the brilliant private dealer, memorable rival to the well known collector Stefano Bardini (whose palazzo is on the other side of the Arno and also a museum today). During the first half of the last century, the Palazzo lived through a series of sales, purchases and bankruptcies of antique dealers, until it was bought by the State and opened as a public museum in 1956.

I find Palazzo Davanzati one of the most enjoyable and fascinating museums of Florence. I consider it as a magical historic bond with the Middle Ages, while its decorated colorful walls are simply outstanding…

Last but not least, the view from the top “altana” floor from the open loggia is truly marvelous and represents the symbol of wealth of Gothic Florence.

The museum is closed on the second and fourth Sunday of the month (open on the others) and the first, third and fifth Mondays of the month, closed on New Year's Day, May 1 and Christmas Day.

Areas open to the public

The areas that can be visited are the ground-floor loggia and the first floor (Salone Madornale, Sala dei Pappagalli, Studiolo, Camera dei Pavoni and the two rooms displaying lace) on any given open day.
Access to the second floor (Salone Madornale, Camera da letto della Castellana di Vergy, Studiolo, Sala da Pranzo) and the third floor (Kitchen and Camera delle impannate) is organised for accompanied group visits during normal hours but require a reservation by phone 055 0649460 or sending and email to mn-bar.capiserviziodavanzati@beniculturali.it.

The museum adheres to FREE entry on the first Sunday of every month between October and March.