Contemporary Italian art is the protagonist in Florence at the YTALIA Energia Pensiero Bellezza. Tutto è connesso – an exhibition spread throughout the city in specific symbolic locations: Forte Belvedere, Palazzo Vecchio, Palazzo Pitti and Boboli Gardens. Florence has long been considered a type of open air museum, where the antique and modern aspects have a dialogue of sorts. The city brings together Renaissance and contemporary, as in the over 100 pieces in this exhibition.

The name chosen for the exhibition, Ytalia, dates back to the 13th century and to Cimabue, who used this term during the creation of the Upper Basilica of Assisi, associating it with a representation of cities, probably Rome, taken as a symbol of our country. 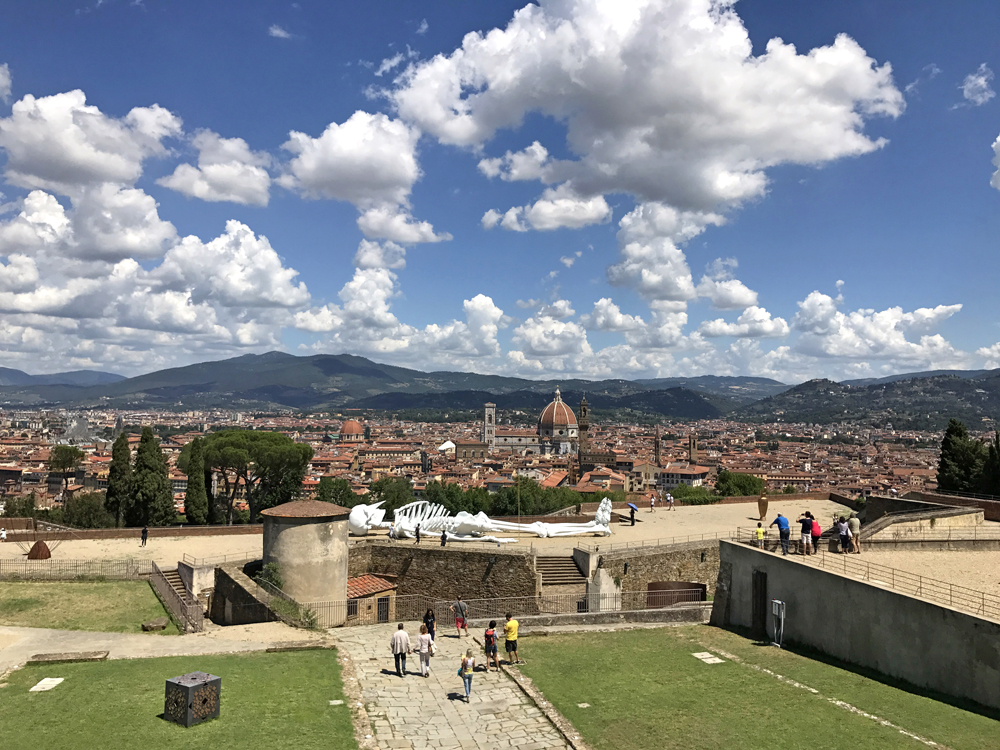 Calamita cosmica by Gino de Dominicis creates the most impressive visual impact when you look at the whole exhibition: a 20 meters long, white skeleton lying on one of Forte Belvedere’s bastions and overlooking the city, almost in line with the Brunelleschi dome. The work connects the Earth time, represented by the anthropomorphic skeleton and the Cosmos, represented by the golden rod in the direction of the sky. 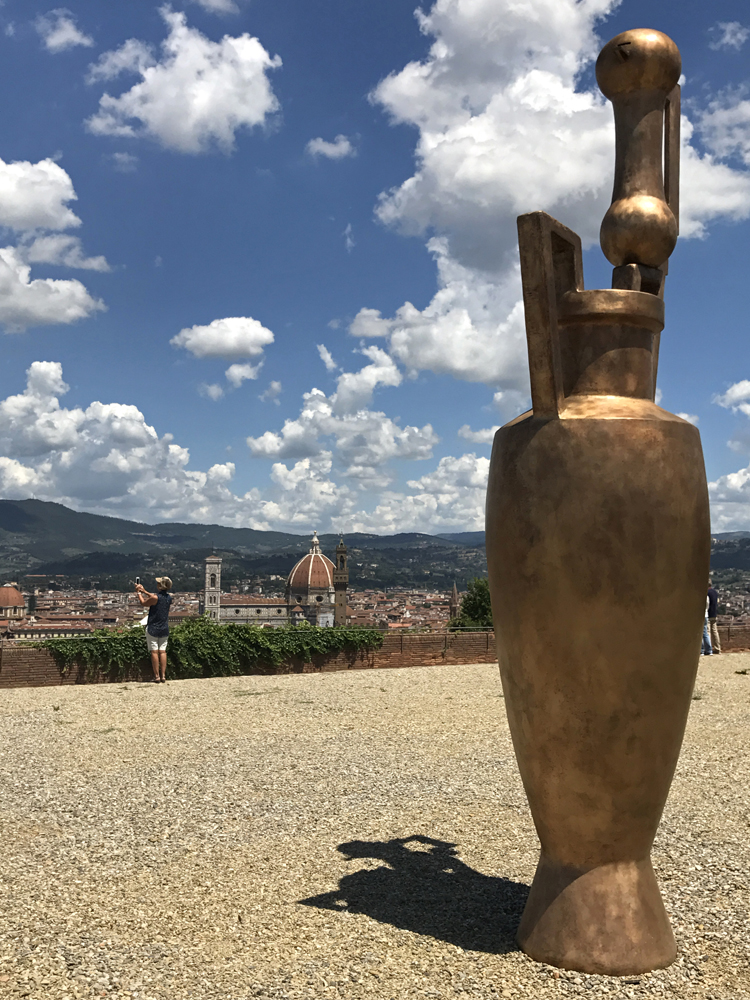 Within walking distance, there are works by Marco Bagnoli as well as Anfora and a model by Remo Salvadori. 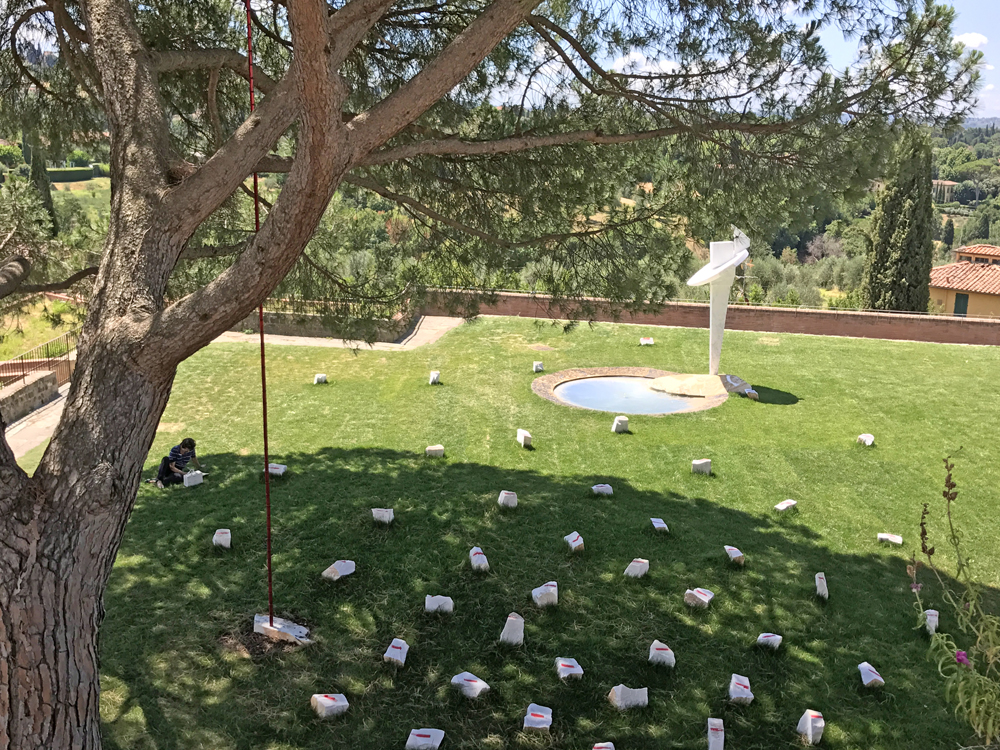 The wide open spaces of the Forte Belvedere are the perfect stage to accommodate the exhibition: there are about twenty pieces located outside the fort and can be admired both from the highest point of the fort, with the city as a backdrop, or by walking through the city streets and visiting the other museums. Among the most impressive and perfectly integrated works, are both the works of Marco Bagnoli Noli “me tangere”, on the south side and “Listen to the flute” by Canna.

Forte Belvedere, an urban fortress built at the end of 1500’s to protect the “Oltrarno”, is located on Boboli hill, offering a wonderful panoramic view over Florence. Only a short distance from the Forte Belvedere you will find the Boboli Gardens (only the exit, the entrance is down below) and Villa Bardini with its beautiful gardens.

Where can you find Other Pieces of the Exhibition?

The show Ytalia recreates a connection between some of the more important arts of the city creating a network of places to visit. The itinerary starts with the Forte Belvedere where one can then procede to explore Boboli Gardens, Galleria Palatina, Galleria d’Arte Moderna, the Uffizi, Palazzo Vecchio, the Basilica di Santa Croce, both the the cloister and the Pazzi Chapel, Marino Marini Museum together with the Rucellai Chapel, and the Novecento Museum.

Information on the Exhibition

The exhibition Ytalia will be visitable until 1 Ottobre 2017, everyday from Tuesday to Sunday from 10:30 am till 7:30 pm (last entrance at 6:30).
The entrance fee is 3€, and it is included in the Firenze Card – for those who have opted to purchase one. There is a reduced ticket (2€) for those who have an entrance ticket to other museums that are hosting pieces of the show.

Until the end of the exhibit, on October 1st a new bus, called Ataf FB (Forte Belvedere) line, will connect the historical center with Forte Belvedere and Villa Bardini.

The bus runs every 30 minutes between Tuesday and Sunday from 10 am to 7 pm from Piazza Pitti to the Forte Belvedere. This is the bus route as published on the Ataf.net website. The bus is not free (you need an ATAF bus ticket) but it will make visiting the exhibit easier as it avoids the climb (and summer hear!) for visitors and connects the  Forte to the city. 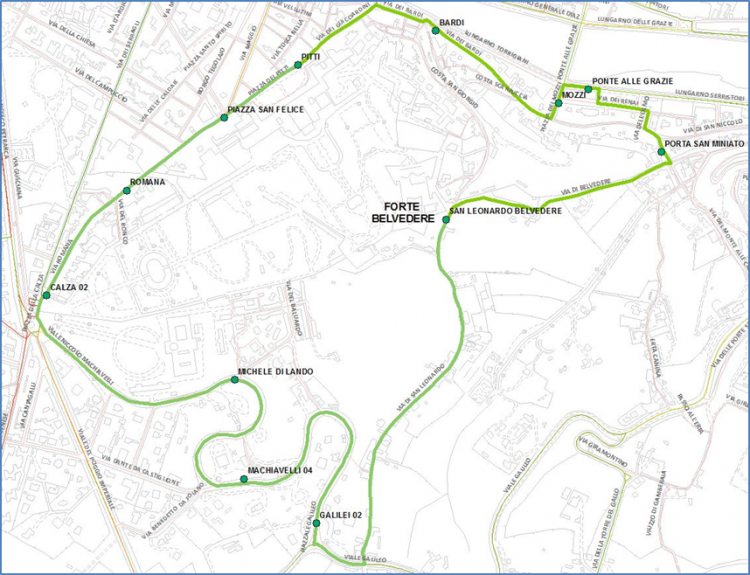