The Chiostro dello Scalzo: The Silent Sound of Beauty 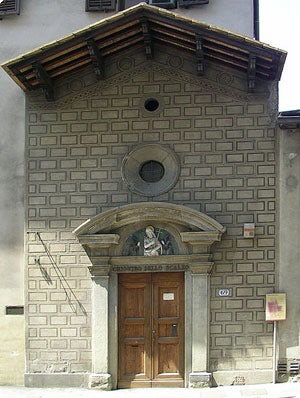 Whenever you feel like looking for a meditative and art spot in central Florence, one can always find inspiration and deep connection with the beauty of the Renaissance inside the Chiostro dello Scalzo (Via Cavour 69). Once you enter the cloister, you’ll perceive a very intimate, comfortable atmosphere. This Chiostro keeps its original peaceful identity and offers a real antidote to larger, crowded museums of Florence.

This little cloister used to be the entrance to the chapel of the Confraternity of St. John the Baptist founded in 1376. The brothers of this company originally met in San Jacopo in Campo Corbolini church up until 1407, later on transferred into a private residence in San Gallo and eventually into the little chapel attached to the Chiostro. The brotherhood lasted until 1786 when the property was sold. The small oratory was destroyed in the 19th century to enlarge the modern Via Cavour. Used by the Accademia delle Belle Arti for a while, it was open to the public in 1891. This little hidden treasure features a remarkable fresco cycle by high Renaissance master Andrea del Sarto and his friend and fellow painter Franciabigio. The frescoes depict twelve scenes of the life of St. John the Baptist, patron of the brotherhood and of Florence, and four Virtues. 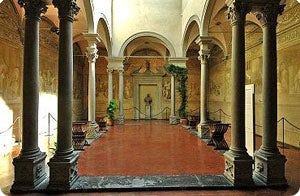 The original name “Scalzo” was given as cross-bearers in the Confraternity's processions were barefooted (scalzi) as a sign of humility. The Brothers belonging to the Confraternita wore a long simple black robe and cowl exactly as depicted in the glazed terracottas of the lunette above the entrance portal. The emblem of the Company is the bust of Saint John the Baptist dressed in a garment of camel hair and a leather belt around his waist, showing halo and golden cross to the visitor. The Saint is the main central figure, intentionally represented in a larger scale than the two brothers within the lunette, as a sign of devotion. 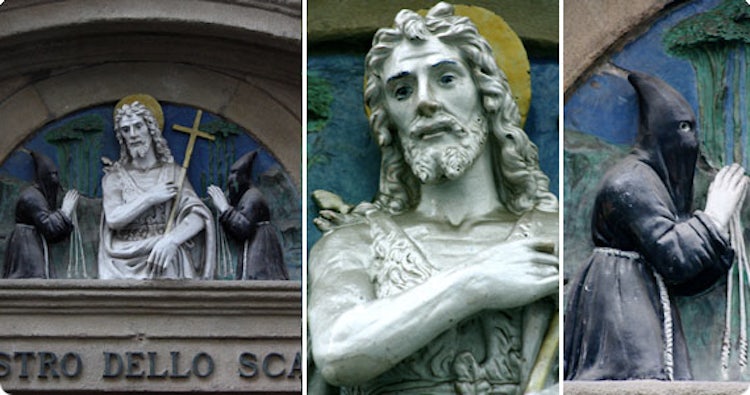 The cloister was designed by Giuliano da Sangallo and decorated in grey and brown griseille fresco by Andrea del Sarto and Franciabigio (Francesco di Cristofano, 1482-1525). These paintings were indeed less expensive than fresco decorations with gold leaf and precious color mineral pigments. Andrea del Sarto himself was a member of the brotherhood and was a direct messenger of the spiritual values of simplicity shared by his brothers.

The frescoes were painted in various time frames between 1509 and 1526, depicting the life of St. John the Baptist in the main frames subdivided by grotesque style motifs and four allegories of Charity, Hope, Justice and Faith. The scenes of Saint John the Baptist do not correspond to the actual chronological order of their execution. Del Sarto started with The Baptism of Christ in 1513 and finished with The Birth of the Baptist in 1526. It is interesting to see how his technique matured over the course of those years, especially his sculptural clarity. See the photo gallery below for more photos.

Two of the scenes painted in chiaroscuro were painted by Franciabigio (1482-1525) while Andrea was in Paris in 1518, called by the king of France, François I. The king had personally requested Andrea del Sarto to join the Fontainebleau school as his incredible fame of being the “faultless painter” had gone beyond the borders of Florence and Italy. The elegance and balance of his figures was considered to have no match. 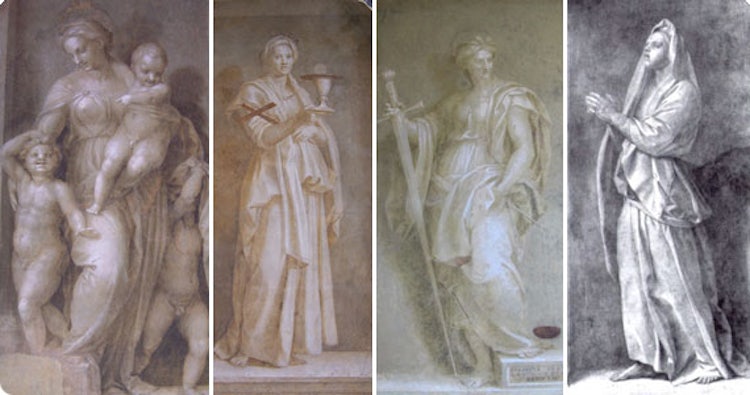 Visitors can experience the mastery of an artist admired by Michelangelo, enjoying the episodes from a short distance directly at eye level. Del Sarto was also teacher to Giorgio Vasari, who later became his biographer, describing him as the faultless painter or "painter without errors" in Vasari's "Lives" which chronicled the lived of the most illustrious painters of his day. Del Sarto played an important role now acknowledged as fundamental to the development of Mannerism. Sarto’s style is marked throughout his career by an interest in the effects of color and atmosphere and by a sophisticated informality and natural expression of emotion. The general mood in the frescoes is always intimate and never rhetorical. 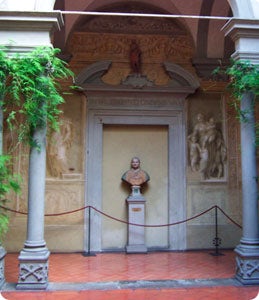 The terracotta bust in the middle of the cloister is an homage to the bishop Saint Antonino Pierozzi, who as archbishop had approved in 1455 the birth of the Compagnia dello Scalzo. The Company became more and more popular in Florence, as witnessed by an official document in 1631. The chronicles refer to a large community of brothers composed of a Governor, a council held by two elder brothers, an accountant, a copyist, six nurses, a dozen of specialized clerks, a priest, a doctor, and a servant.

The frescoes were exposed to weather and thus deterioration for centuries. In the early 1960s, the frescoes were detached from the walls for restoration and were finally returned to the cloister to be reopened for public viewing in 2000.

A visit to the Chiostro is worthy of a visit whenever you feel like enjoying art in silence. This is one of the most enchanting little gems in Florence, perfect in offering shelter on a warm summer day and the exquisite chance to admire a Renaissance masterpiece far from crowds and from a short distance. Standing in front of these frescoes is a true privilege to appreciate technique, beauty and a spiritual connection with ancient religious values.

Via Cavour, 69 near Piazza San Marco

Closed: Tuesdays, Wednesdays, Fridays and the 2nd and 4th Saturday of each month, the 1st, 3rd and 5th Sunday of every month, January 1, December 25