What are Truly Genuine Florentine Foods?

Ordering Traditional Dishes while on Vacation: a Guide to Authentic Fare in Florence

Since Italian food is definitely one of the more internationally reproduced cuisine, it is difficult for guests coming to Italy to distinguish what is real Italian because everyone already arrives with an idea of what is “Italian food”.

However, they are completely oblivious to the fact that it is a distorted representation according to where you live and who introduced it to that country. Many times, their experience totally ignores the fact that every region in Italy - and sometimes even every city - has its own special regional ingredients, recipes and flavors. Yep, even Italian food can be divided up into regions where you'll find some dishes in one place and not in another. 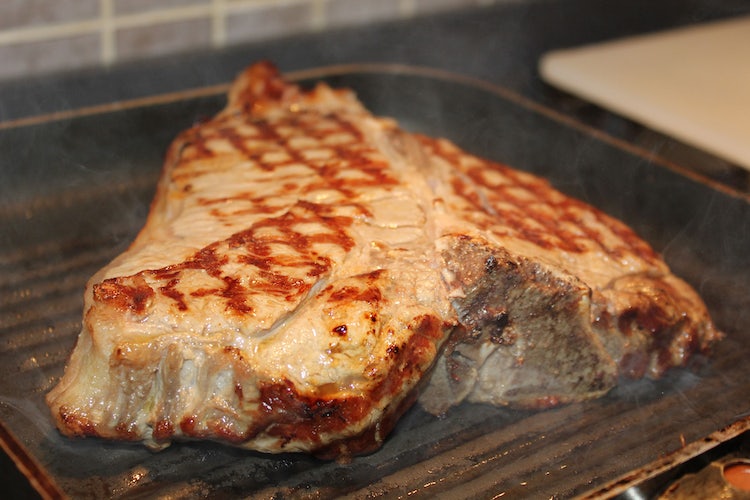 So while you're in Florence, you should try out the dishes that are traditionally made in Florence and that you won't find elsewhere! So we thought to provide some help in navigating the menu while Florence so that you can order the unique dishes made in the city.

The first thing to note, bread in Tuscany is salt-less, or as the Florentines will tell you “sciappo” (pronounced shap-o). This which pretty much means the final product is, at least for many, insipid. But the locals will tell you that their food is flavourful and they don’t need extra salt or anything else for that matter in their bread. So in general, at restaurants in Florence (and across Tuscany), you won’t find salted bread on the table but if want to break with tradition and you are out shopping for your own meals, you can ask for “pane salato” (bread with salt).

Another thing to note: every region, province and city is exceptionally proud of their extra virgin olive oil production but that doesn’t mean that every restaurant serves only the local “stuff”. If you are an olive oil snob, then check the label on the bottle before pouring it on your bread to avoid any unpleasant surprises. 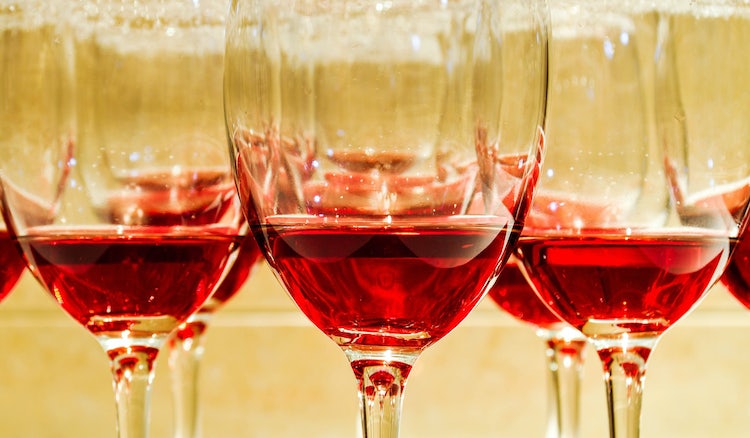 As far as wine, I frequently tell people it is hard to go wrong with wine in Tuscany but, if you are going to go with the house wine and you really want local... then ask the waiter. Of course, it is always fun picking out a bottle from the wine list - where normally the wines are divided into regions. Remember to keep an eye on how much the designated driver drinks, the laws are pretty strict and, yes, they are enforced. Another great option: opt for just one glass or a “quartino” (¼ of a liter) or “mezzo litro” (½ of a liter) which is a little shy of a full bottle and helps you to resist the temptation of finishing the whole bottle.

The last general thing I would point out is that Tuscans, and this means Florence locals as well, prefer a very thin crust pizza. If you want something thicker, look for a restaurant that advertises ”pizza Napoletana”.

These are actually quite popular all over Tuscany, so if you were looking for something on the list of starters that is particularly local, you can’t go wrong with this dish. It is a liver paté, normally chicken (though some are creative and add other “stuff”) served on sliced and toasted bread slices. 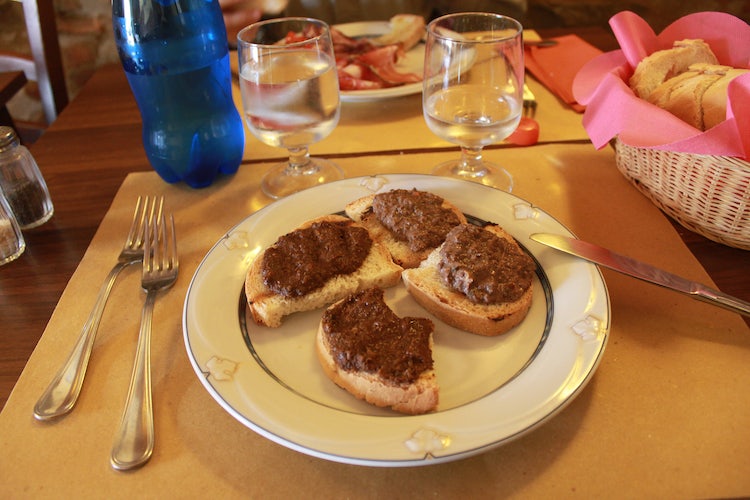 Pasta as a "first" course

After you have been in Italy a bit you come to realize that the Italians never eat their pasta together with the main course. It is served as a first course. Then they take your plate away and serve the main course... and salad comes last, if you order it.

This extremely typical pasta dish is not always found on the menu, so when you do find it... know it is a classic since way back “when.” Crespelle are the Italian version of a crêpe, and in this case stuffed with ricotta cheese (the real ricotta cheese - YUM!) and spinach, then covered with a creamy béchamel sauce. Sometimes you will find they add a spoonful of flavorful tomato sauce and always a hefty portion of grated parmesan cheese. This dish is baked in the oven and served golden brown. 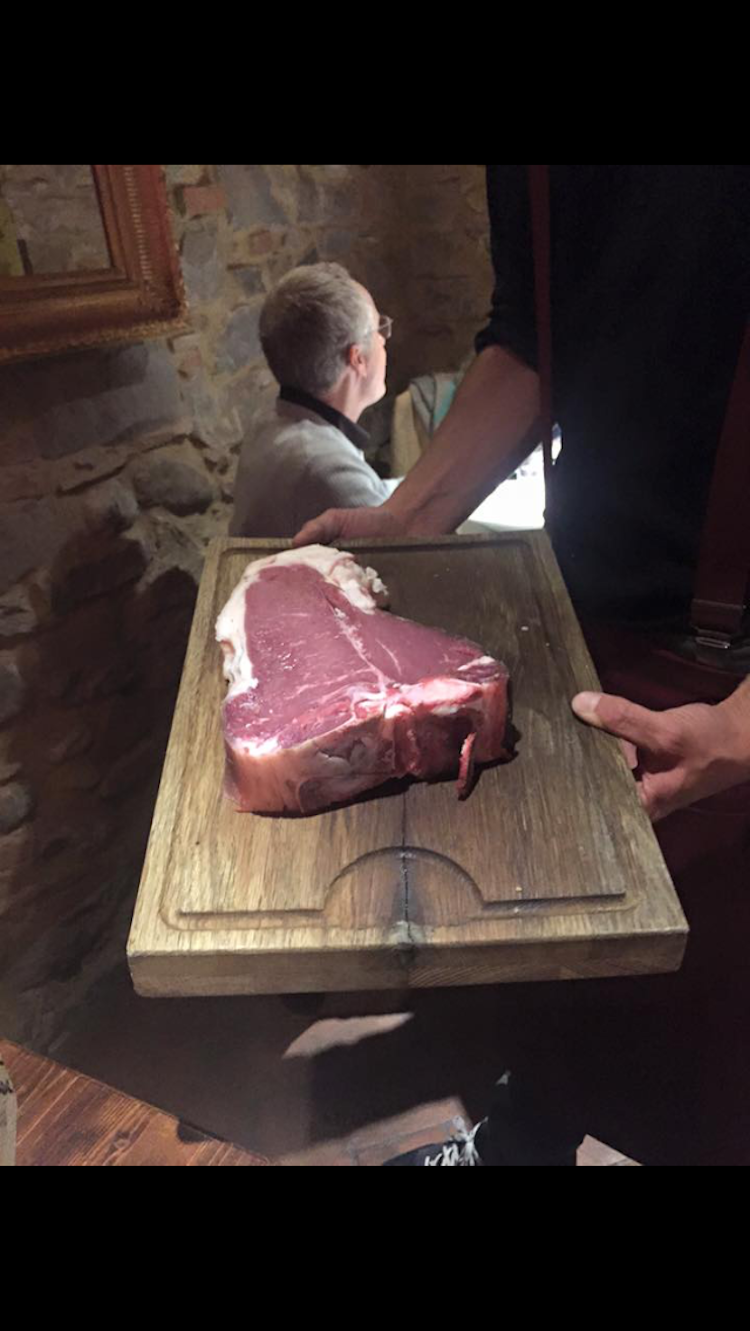 It would be near impossible to visit Florence and not realize that this is one of the truly unique dishes of the city. It is almost 2 inches thick and always comes with a bone, best grilled over a lively flame for about 3 - 4 minutes per side, salted at the end. This dish is mythical in the Renaissance city and tempting to meat lovers far and wide. It is advertised everywhere, but that doesn’t mean everyone excels in making it so I encourage you to read the article by local food blogger Elena who can give you some pointers on where to find the best piece of Florentine steak!

Yet another dish that you will find on every street corner basically because it doubles as a main course or easy to eat street food. A creative recipe that accents the tradition of using every possible piece of meat. Read our article for a detailed description of how to make this favorite among the Florentines or, if your prefer the article will tell you where the best places are to find a dish (or panino) while staying in Florence. 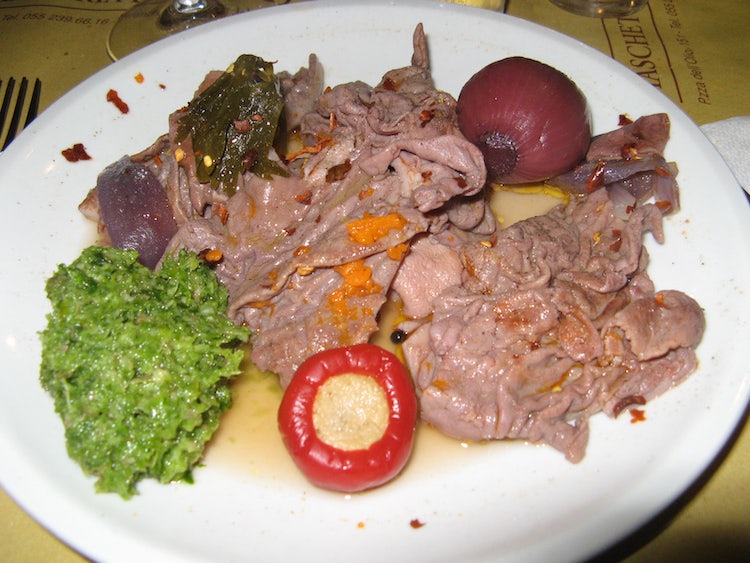 Italian food in general has its roots either with the poor working class with limited funds and resources or with the “rich and famous” like the Medici family. This particular dish has its origins with the first group, using the toughest cuts of meat and, taking advantage of the kilns at the terracotta factories, the meat is slowly cooked over a low flame covered in red wine, garlic and lots and lots of peppercorn (thus its name "peposo" or peppery). 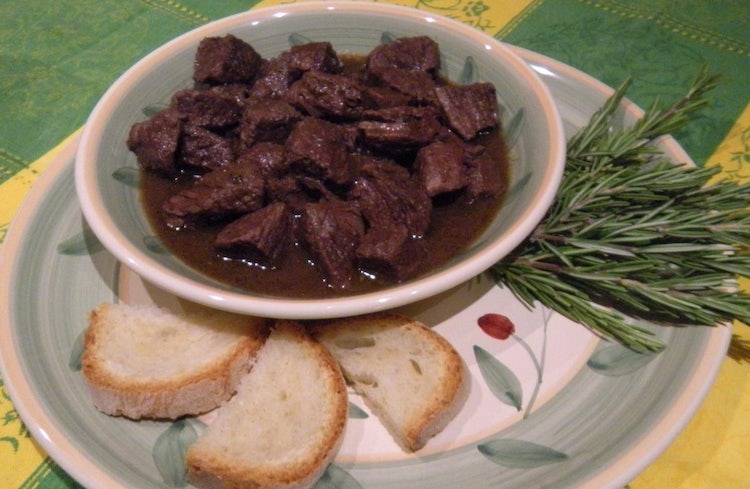 In a landlocked city such as Florence it is hard to imagine that fish dishes are so famous. The Baccalà, a salted cod fish, actually was introduced to this fair city while exchanging their silks, wools and other materials with the northern countries. So as not to send the boats back empty, they took on salted cod fish and sent the transport back to Florence. A savory combination of fish, tomatoes, onions and rosemary served with toasted bread.

The concept of this dish is meat, fish or beans flavored with a mix of wild herbs which would vary according to where you were living. The true specialty in Florence is Seppie in zimino, which means octopus simmered with a delicious combination of spinach, herbs, onions and a tad of tomato sauce. 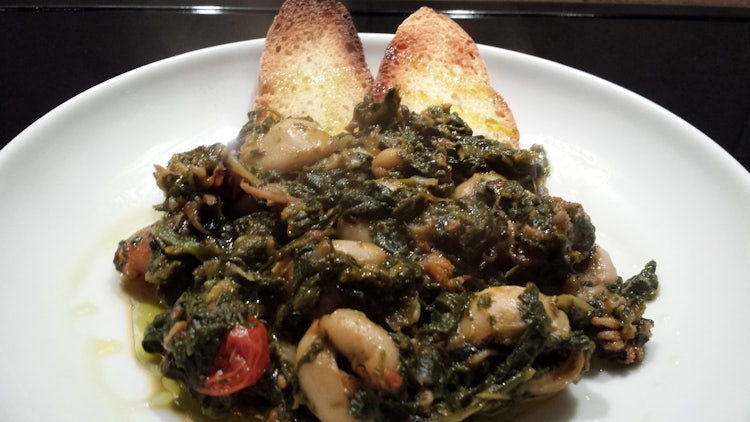 Beans, beans and more beans. The Florentines love their beans, and this has been noted throughout time. The Italian word for beans is fagioli, however in dialect it becomes fagiuoli, adding a “u” to bring out the sound. This particular dish includes the flavouring of tomato sauce and fragrant sage... which is what gives it the name all’uccelletto. Sometimes the white navy beans are on the menu in their natural form with garlic, sage and peppercorn (no tomato), and it can sometimes include sausage... in all combinations, they are very tasty! 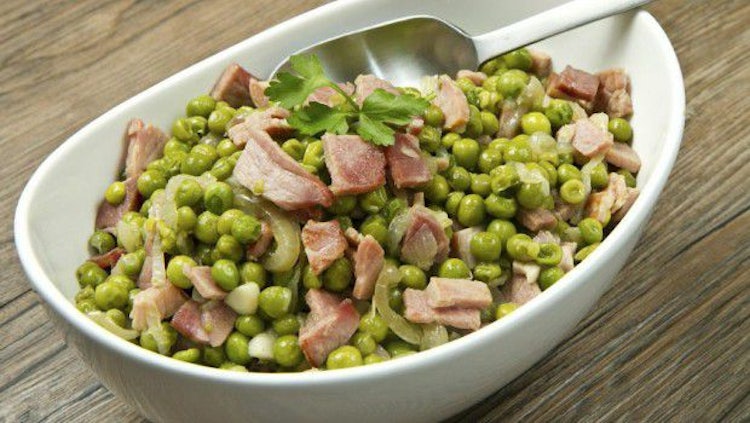 Piselli alla fiorentina stands for green peas, boiled together with a clove of fragrant garlic, fresh parsley, uncoooked pancetta (cured bacon) and a liberal splash of olive oil...just before serving.

The mix of the sweet peas, the garlic and olive oil make for a great excuse to do a “scarpetta”...the Italian word for cleaning your plate clean with a piece of bread.

These are two common vegetables found in any Florentine garden. It is said that Caterina de’ Medici adored spinach and requested its presence on the table at every meal. In fact, you may have noticed that several dishes have spinach as one of the primary ingredients. Normally it is served cooked and then sauteed with a healthy dose of olive oil. You'll find artichokes in all its versions: great eaten raw (pizimonio), preserved in olive oil, fried, sauteed, with pasta, in a rice dish, and when in season, they go great with almost every main course!

This dish is very Florentine, but it is extremely difficult to find on the menu. It is easier to find it in a pastry or ice cream shop. But know right up front, they normally don’t resemble the original recipe. The first name was the “helmet of Catherine” (elmo di Caterina) because it was shaped like the military helmet called the “zuccotto”. What is it made of? Imagine a serving bowl lined with thinly sliced cake and filled with sweetened ricotta cheese and candied fruit (especially lemon peel) and almonds. Then put it in the refrigerator till it is hard like gelato. Eat inverted on a plate!

A very typical Florentine sweet cake normally only used to make its appearance during the Carnival holidays. But you can find it almost all the time year-round given its popularity. A very simple cake, it was originally made with lard, thus earning itself the name of schiacciata unta (unta=greasy) but over time the lard has been replaced with olive oil and it now has a much lighter flavor.

Schiacciata fiorentina is normally cooked in a rectangular form, covered with powdered sugar with the design of the Florentine lily or "giglio", the city emblem, on top... truly decadent is when it is cut in half (like a sandwich) and they add a layer of whipped cream or vanilla pudding (called locally crema pasticcera which translates into pastry cream) in the middle. 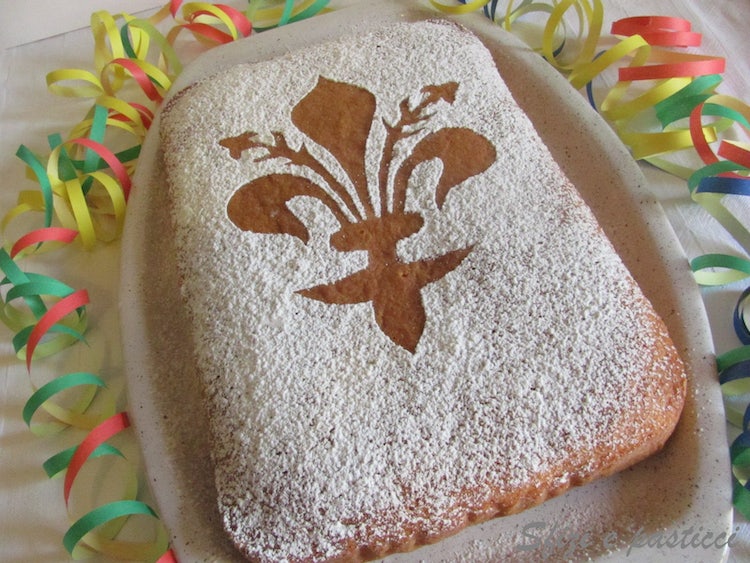 The legend has it that a cook in an English household just outside of Florence in the hills of Fiesole was quite thrifty. After teatime, she didn’t want to throw away the uneaten cookies (biscotti) so she layered them with a liquid custard cream and served them up for dessert. You will often find this on the menu with a might of alchermes to give it some red coloring or as a gelato flavor...both are very tasty.

What manages to be a surprise for everyone (and including many of the locals themselves) is that gelato actually has its origins here in Florence with the architect Bernardo Buontalenti. And if you are wondering, yes this would explain why you will occasionally find a flavour called Buontalenti (or Crema of Buontalenti). Read our article to find some of the best gelato shops in Florence. 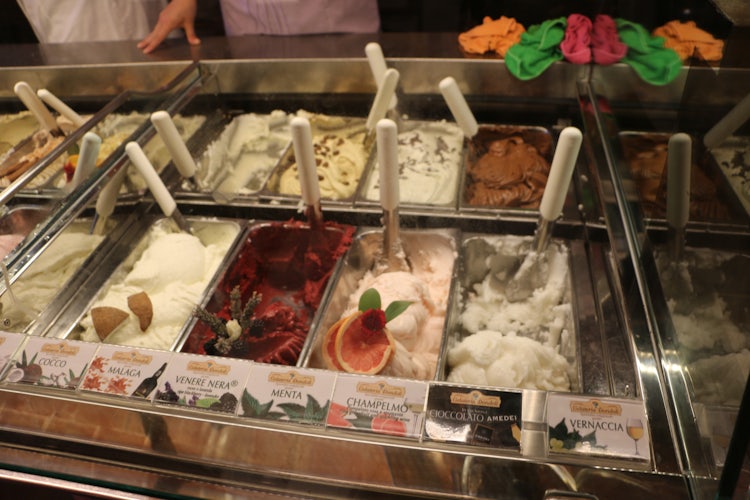 This list should in no way stop you from tasting all of the delicious treats you will find on the menu, it is only intended to help you find some of the original or authentic flavors of the city. Have fun on your adventures, and write to let us know if you tried any of these specialties... and what you thought of them!